Not messing with a winning formula is a practice that has become a bit more commonplace of late, and there is a good argument to be made that this is the reason why the ongoing heavy and power metal meets 80s synth-pop craze hasn’t gone the way of its forerunners. This isn’t to say that some degree of stylistic evolution doesn’t have a place in the equation, but it works best when presented in a controlled manner, as what really makes this new yet familiar niche work is an emphasis on catchy hooks and an upbeat feel. Though they are now three albums deep into their career, Swedish melodic power metal upstarts Metalite still sound like they’re the new kid on the block, taking a highly popular sound that first ushered in the 2010s via the work of fellow Swedes Amaranthe and Finnish neighbors Battle Beast and blending it with a more swift-paced and riff happy character that is a fair bit similar to more metallically driven players such as Frozen Crown and A Sound Of Thunder.

Though already having established themselves as an intricate player in the broader scene with their 2017 debut “Heroes In Time,” it was not until their sophomore LP “Biomechanicals” that they truly codified their sound with newcomer front woman Erica Ohlsson. Continuing in the same futurist lyrical themes and displaying them musically via draping a keyboard-saturated tapestry behind a hard-hitting riff assault, 2021’s “A Virtual World” could all but be treated as a sequel of sorts to its immediate predecessor. At first glance it might come off as an overtly saccharine-steeped product that’s too close to overt synth pop for comfort, at least to those married to the heavier end of the metal spectrum, but a deeper examination reveals a band that uses these elements more as a tool to augment their metal pursuits rather than mask them. The guitar work provided by Edwin Premberg and Robert Ornesved cuts through the arrangement effectively and gives things a much needed edge, to speak nothing for the flashy solos that adorn each song, and the powerful drum work of Lea Larsson definitely gives things a heavy dose of bombast.

The songwriting on this studio excursion definitely leans towards radio-friendly territory, avoiding any excessive time lengths and keeps things compact. That being said, this quintet definitely showcases an ability to vary their approach within a sub-5 minute box, often cycling through a number of intricate shifts in feel seamlessly and shying away from too much repetition. The high octane opener and title anthem “A Virtual World” pulls no punches in the infectious hooks department, but also injects enough energy into things to pass for a slightly lighter answer to Stratovarius, an approach that is reaffirmed on equally kinetic anthems such as “We’re Like The Fire” and “Running”, the former of which manages to go in heavy on the riff work while also incorporating some dubstep elements. Other fun romps with a highly catchy demeanor such as “Cloud Connected” and “Peacekeepers” don’t blaze the trail quite as quickly, but lay on the nimble riff work something fierce and even make room for bassist Robert Majd to throw in a few flashy fills. 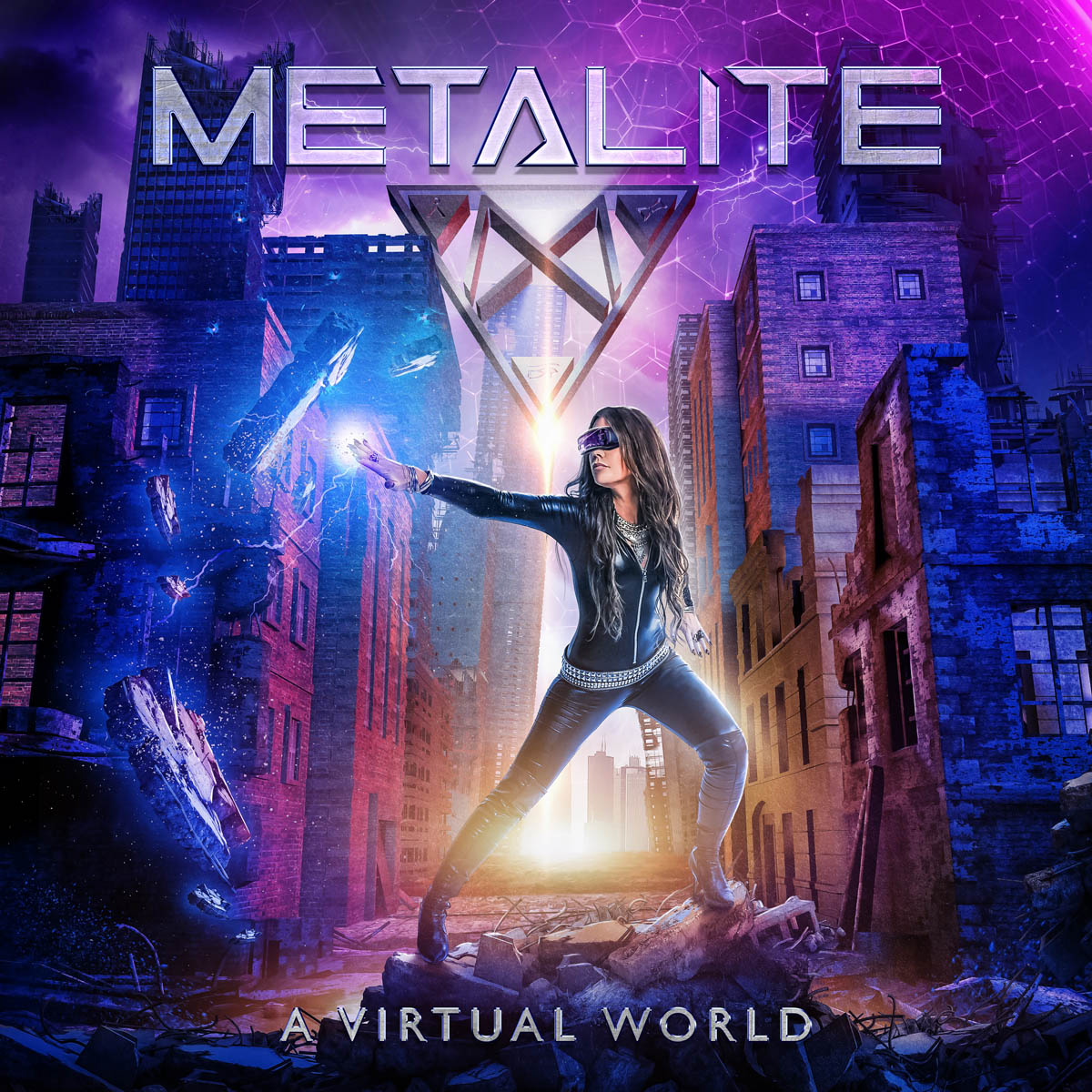 While the musical display on here is quite exemplary and showcases a quartet of instrumentalists that are more than willing to stir the sonic cauldron a bit more than most, the focal point of the whole package is Ohlsson’s soaring vocal work. Generally mid-paced and predictable movements through rock-tinged fanfare such as “The Vampire Song” and “Alone” are basically carried beyond their plain character by the sheer power of her performance, which often parallels what current Amberian Dawn singer Paivi “Capri” Virkkunen brings to the table. Likewise, this almost Celine Dion-like level of power makes for a triumphant counterpoint to the chunky metallic riffing and boisterous keyboards that permeate “Artificial Intelligence” and the mixed up assortment of rhythmic twists and choral pomp that is “Talisman”, which is the standout moment of an album that is generally consistent in the quality department, owing in no small part to a brilliant guitar display, but mainly due to how Ohlsson’s voice just belts out triumphant note after triumphant note.

As mentioned previously, this album listens a lot like the sequel to “Biomechanicals,” if not its twin. It just barely edges out said album by showcasing an even more advanced take on the formula that they’ve been consistently displaying since their inception, often throwing in some new stylistic curveballs amid the predictable mixture of consonant melodies and fast-paced metallic splendor. There are few weak spots to speak of, apart from maybe the overly cheerful character of “Beyond The Horizon” (which is completely mitigated by the most shred-happy guitar solo on the entire album) and closing anthem “Synchronized” being a tad anticlimactic when compared with the barrage of majestic power metal brilliance that precedes it. But taken as a whole package, this is the best album that Metalite has put out to date, and both fans of their prior work and those who have taken to any part of the spectrum of female-fronted power metal bands to crop up in the past decade will not want to miss this one.

Following a solid display of melodic power metal splendor with a synth-pop gloss two years prior, this more guitar oriented answer to Amaranthe scores a hat trick with another strong studio entry.