Ensiferum bassist Sami Hinkka side steps (but not too far) from his main act to co-found the exciting new power metal act called Metal De Facto. The concept of the band isn’t particularly new for a metal act, basking in the glorious history and battles of Ancient Rome. Death metal acts ADE and Ex Deo have more famously picked up on the idea, as well as Italy’s Centvrion and Sweden’s Descendant in the power/traditional metal subgenres (and a handful of other bands in other various metal styles). While Ancient Rome may be the backdrop, the members of Metal De Facto don’t particularly immerse themselves in the imagery like ADE or Ex Deo, opting to allow their super charged, wonderfully executed and highly enjoyable brand of power metal style speak for itself.

With the announcement of a traditional/power metal side project featuring Sami Hinkka, which would feature lyrical content steeped in a particular historical element, regrettably your author’s first thought was ‘please, not another gimmicky power metal band.’ However, Metal De Facto expertly weaves in influences from the likes of old Helloween, Stratovarius, Rhapsody and Manowar, and the resulting collection of hymns is shockingly more enjoyable then one would think. By the mid-point, a listener could easily forget all about Ancient Rome concept and mind surf those waves of catchy melodies and glorious choruses. The lyrical concept doesn’t quite fit the music, an unfortunate stereotype burned in the mind by the massive testosterone filled riffs and orchestrated choruses of Ex Deo. When listening to songs like “Echoes In Eternity” and “Bacchanalia,” one could expect to hear tales about castles and dragons.

Joining Hinkka is a collection of talented country-mates, who may not be as widely known from their current or previous bands, but the savy know-it-all metalhead is sure to recognize them. Everfrost vocalist Mikael Salo is one of the highlights of “Imperium Romanum,” a young vocalist that soars with a talent that matches his peers. The twin axe attack comes in the form of wily veterans Esa Orjatsalo (ex-Dreamtale) and Mikko Salovaara (ex-Kiuas). Hinkka and drummer Atte Marttinen (ex-Kivimetsän Druidi) bring the thunder and the lone non-Finnish member, Aussie keyboardist Benji Connelly (Everfrost) brings a brash and flashy flair to the ivories, not unlike what you would hear in Freedom Call. 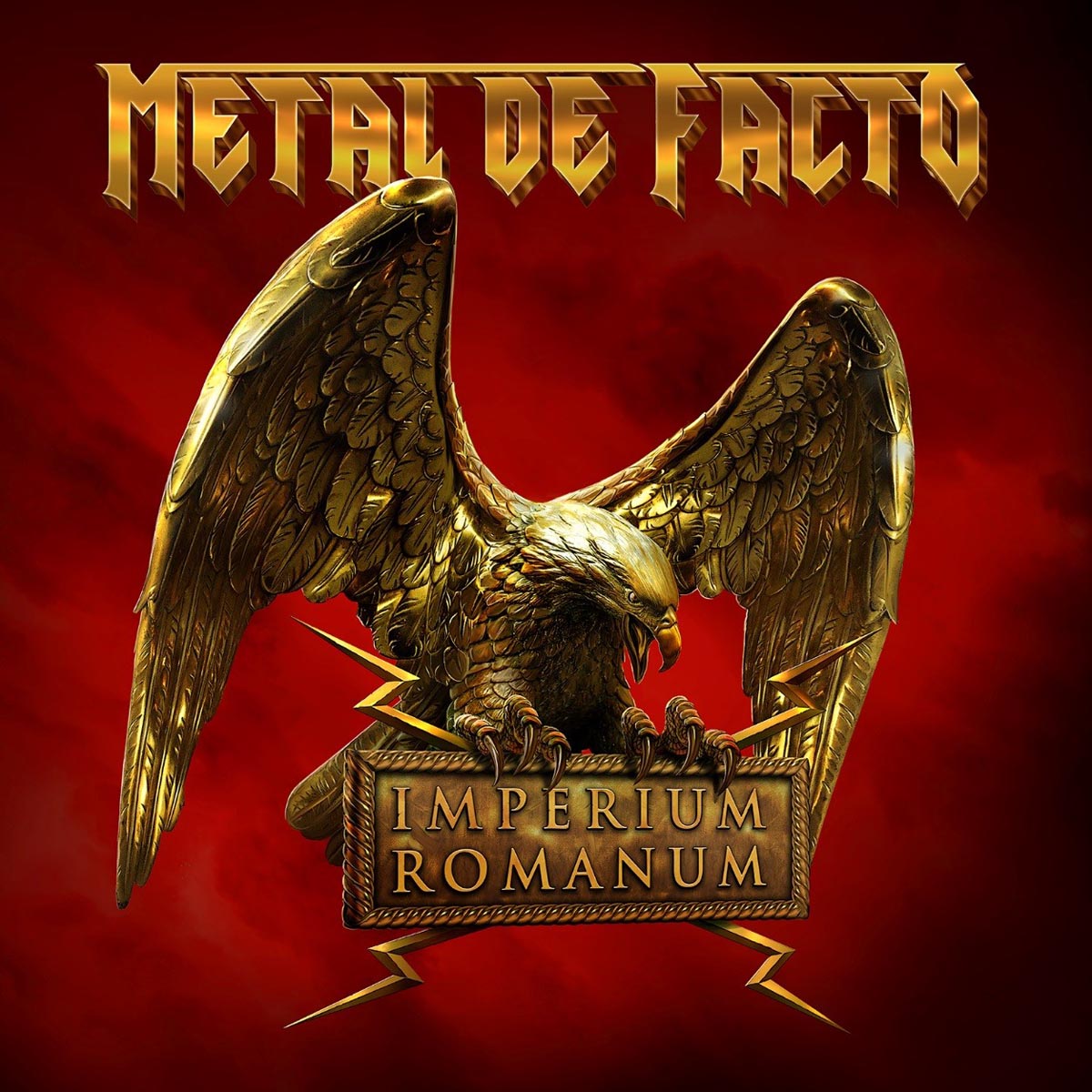 “Imperium Romanum” begins with Salo‘s triumphant scream at the onset of “The Conqueror.” For a fan of Euro-power, it will not take long to realize that there is something pretty magical about this song – the chorus, the melody and the dueling guitar/keyboard solos. “Legonnaires’ Oath” features a touch of Manowar in the riffs before erupting into an old school Scanner style refrain and chorus. “Naturalis Historia” gives off a Stratovarius vibe, especially where Connelly’s keywork rides on top of Orjatsalo and Salovaara‘s riffs. Speaking of Connelly, “Inferno” and “Bacchanalia” is where his style comes out front and center (perhaps a touch too much), with the former akin to an 80’s pop-infused synth and the latter is so much like modern day Freedom Call. At this point, it is clear that Metal De Facto is no joke. The band gels like a grizzled veteran.

“Echoes In Eternity” is a brilliant power ballad in the perfect position to break up the album a bit and further remind the listener of the quality of the songwriting at work. Outside of the intro, “Colosseum” is a dazzling instrumental piece, where blistering riffs recall some favorite old Stratovarius hymns. “Ides of March” is the heaviest of the lot, focusing on crushing riffs before unveiling the album’s most melodious chorus – this is a pure metal tune that encapsulates everything great about Euro-power metal. “The Ascending of Jupiter” keeps up the scorching pace, where the band gets all the aggression out before the near 10 minute opus “Germanicus,” which features Maurizio Iacono (from the aforementioned Ex Deo) in the spoken word piece just after the song’s mid-point.

Bottom line, Metal De Facto is no joke and is certainly no gimmick. The band features a gathering of criminally underrated musicians that play a style of euro-power metal to a level of many of the subgenre’s top bands. Drawing influences from a variety of favorites, Metal De Facto takes all the best elements and forges an incredibly satisfying album where brazen keyboards tickle blistering riffs and voices soar above rolling tides of melodies. “Imperium Romanum” should not be ignored, especially by fans of masterfully played power metal.

From the creative minds of Ensiferum bassist Sami Hinkka and Ex-Dreamtale guitarist Esa Orjatsalo comes the new power metal act Metal De Facto. Be forewarned though, this is not just another gimmicky power metal band. In one of the finest pieces of European style power metal released this year, Metal De Facto uses stellar songwriting and all the best elements of influential acts like Stratovarius, Helloween and Scanner to forge an exciting release where brazen keyboards ride atop blistering riffs and vocals soar over sing-a-long choruses.