Metal Allegiance burst onto the scene in 2015 with one of the strongest debut metal albums in years. It’s even more impressive when you consider that Metal Allegiance are a collaboration, a metal super-group comprised of some of the busiest and most decorated musicians in the genre. David Ellefson (MEGADETH), Alex Skolnick (TESTAMENT), Mike Portnoy (SONS OF APOLLO, ex-DREAM THEATER, et al.) and Mark Menghi comprise the core four, and are joined by a laundry list of metal legends both new and old. Not all super-groups are bad, but let’s be honest – most feel pieced together, inconsistent, and as such, are quickly forgotten. Metal Allegiance’s first album is the rare exception – a cohesive, creative, and eclectic mix of all that makes extreme music great – from thrash to metalcore, progressive and even stoner – it’s got it all.

Three years later, this super-group have reconvened to do it again with their follow-up Volume II: Power Drunk Majesty, releasing September 7th via Nuclear Blast Entertainment. It’s clear Metal Allegiance approached this record differently, paring down the list of guest guitarists from nine to just three. There are also fewer singers this go around and they aren’t quite as obvious as with the first album. The main difference with this album is that it feels like the work of a true band and not a project. Yes, there are still guest vocalists on each track, but with this album, Metal Allegiance make it clear that they are a thrash band making thrash music – fewer guests, no cover songs, and a greater overall sense of thematic and musical consistency.

In an interview, David Ellefson explains that they aren’t just “[phoning]it in.” “These are real songs, written by real humans, in the same room. As complicated as it often makes our lives to do that, it’s a real band.” Mike Portnoy adds “this isn’t one of those email projects where everybody just sends files back and forth. Like a garage band, each of these songs began with playing together, banging it out, old school.” 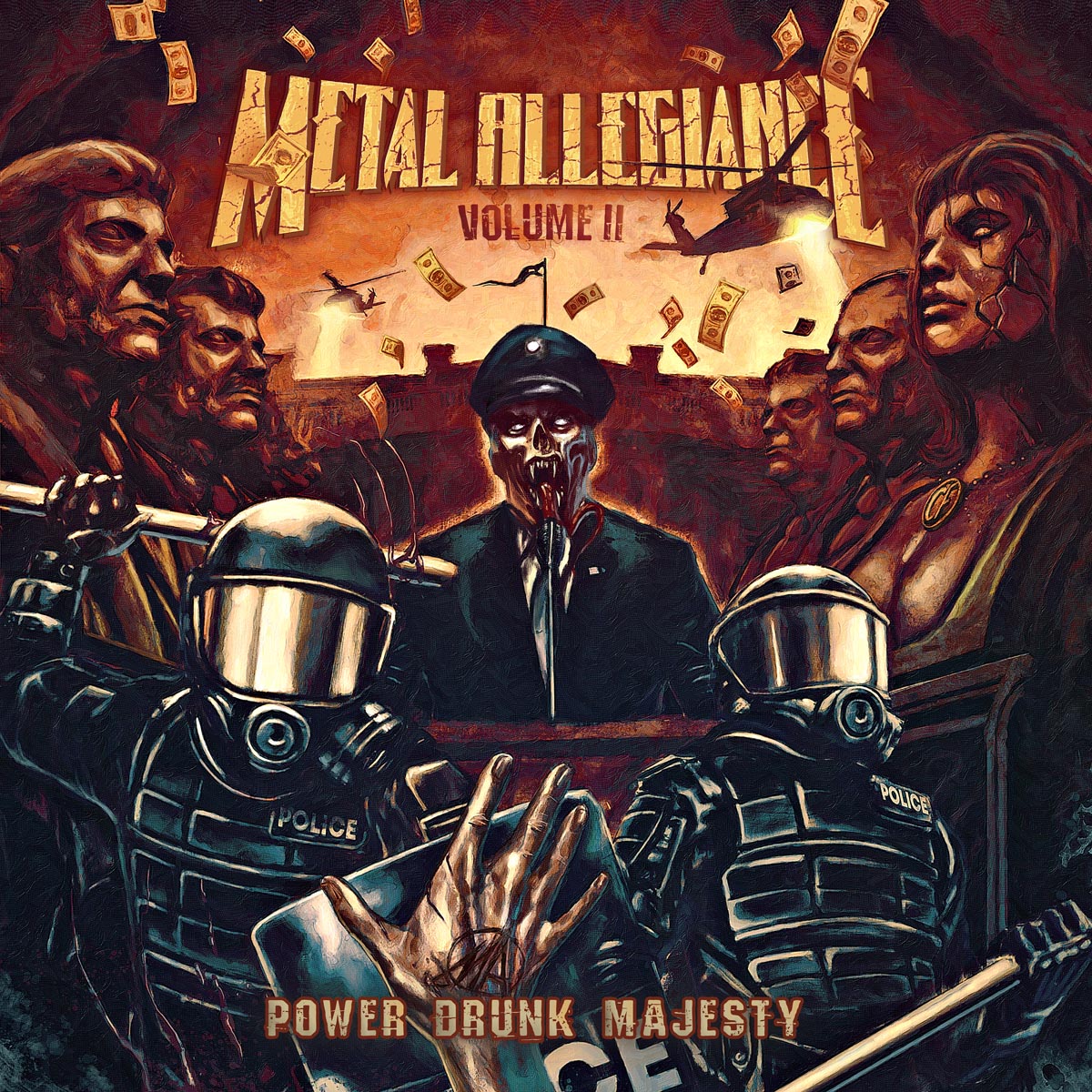 The lyrics on Volume II: Power Drunk Majesty are largely focused on the present political turmoil in the U.S. Unless you’ve been living under a rock, you’ve seen this theme find its way into practically every form of entertainment and media lately. Fortunately, the lyrics here aren’t particularly overt or trite, and more criticize a sort of fascist, police state government than anything specific. Mark Menghi adds that “it’s not a political record with a liberal or conservative agenda. It’s about what American society is becoming today and how much it sucks to be a pawn in the system.” Most importantly, the strong lyrical concept helps set this album apart from the first.

The opening track “The Accuser” features a finger tapping guitar intro that gives way to a brutal, Slayer-esque verse. A standout solo, bridge, and vocal performance by Trevor Strnad help create an opener that deftly mixes the best of classic 80’s thrash metal with modern vocals. The result is a yin and yang of new and classic metal that is emblematic of the band. “The Accuser” transitions directly into another standout track, “Bound by Silence” with Armored Saint’s John Bush at the helm. There’s a definite Pantera vibe that’s also reminiscent of Bush’s prior work with Anthrax, featuring some of the catchiest vocals on the album. The lyrics were inspired by a late night conversation Menghi had in a bar with a terminally ill Vietnam veteran, so it evokes Metallica’s “One” in that way.

There’s a reason the band chose “Mother of Sin” as the lead single, with Bobby Blitz, lead singer of Overkill for nearly 40 years, really shining here. If you aren’t familiar with Blitz’s vocal style, it sounds like an amalgam of Bon Scott, Bruce Dickinson, Dave Mustaine, Sebastian Bach, and what I imagine a demon might sing like. As they do on every track, Portnoy and Skolnick push each other and impress with their consummate drum and guitar work. “Terminal Illusion” opens with Portnoy playing an alternating 4-stroke roll, single-stroke roll pattern that evolves from the sound of sticks on a table, to a snare, and then all around the kit. It feels like a musical nod to the exceptional drum intro from “Let Darkness Fall” on Metal Allegiance’s first album. Leave it to drum legend Mike Portnoy to come up with fresh and unique drum fills after all these years. Speaking of “after all these years”, 64-year-old Mark Tornillo of Accept sounds just as amazing here as he did in the mid-80’s when he fronted the underrated, Megaforce Records band T.T. Quick.

Johan Hegg is the lead singer of Amon Amarth, a Swedish melodic death-metal band known for lyrics that deal largely with Viking mythology. As fate would have it, Hegg looks like a modern-day Viking, but on “King with a Paper Crown” hollow and hypocritical fascists are the lyrical focus, and not mythology. Of course, Hegg still delivers his brand of brutal, growl vocals and adds one of the hookiest choruses on the album. The most unique track comes with “Voodoo of the Godsend”, a hypnotic and tribal song that reunites former Sepultura bandmates Max Cavalera and Andreas Kisser for the first time since Cavalera left the band in 1996. Cavalera says he got the idea for the song from the name of an African Head Charge album called “Voodoo of the Godsent.” If you are as unfamiliar with psychedelic dub groups as I am, don’t worry, as the song is definitely metal, albeit a bit more experimental than the others.

Mastodon’s Troy Sanders returns to provide his unique voice to “Liars & Thieves.” Along with Mark Osegueda, Sanders is the only singer to contribute to both Metal Allegiance releases, and it’s hard to imagine the band without him. The song, which opens and closes with the sound of a boxing bell, swings into high gear three minutes in with a bridge that feels like a new song, featuring a breakneck guitar solo that is one of the best on the album. “Impulse Control” begins with a bass riff that gives way to a straight ahead rocker led by Osegueda. The track serves as a good example of Skolnick’s upfront, aggressive, and raw guitar tone – one of the most welcome changes on this album when compared to the first.

Osegueda returns on “Power Drunk Majesty (Part I)”, a two-part, mini-epic that caps off the album. As a huge fan of prog-rock, I can’t help but wish the band had spent even more time developing the ideas of these two songs, perhaps pushing the concept into a single 20-minute epic. Of course, this is a metal album, and it feels perfectly at home here. The surprise of the album for me though, is Floor Jansen‘s delivery on “Power Drunk Majesty (Part II).” I can’t say I have listened to Jansen’s body of work, yet she offers my favorite performance of them all, with an anthemic and layered chorus that’s accented throughout by recordings of politicians like JFK and Richard Nixon, a la Living Colour’s “Cult of Personality.” The song ends with a cannon blast, both literally and figuratively.

Volume II: Power Drunk Majesty is a different album from the first, and that’s not a bad thing. This is a more focused effort, with a band less interested in gimmicks – a band more crystallized and mature, and yet, still the same band you’ve grown to love. Ellefson summarizes the Metal Allegiance‘s spirit with a simple mantra: “It’s good friends making great music together.”

With “Volume II: Power Drunk Majesty”, Metal Allegiance wisely chose to go in a different direction from their 2015 self-titled effort. The production and musicianship here are excellent, with the only minor gripes being that some choruses aren’t as strong as they could be. A couple points were also deducted for originality since several songs have a throwback quality to them. Of course, that’s exactly the point, and it’s part of what makes this album and this band work so well.