There may not be another guitarist alive with the same combination of multifaceted talent and international stardom as Marty Friedman. Yes, there may be a freaky mutant musician somewhere on Earth who is a better, more versatile, more technically capable player than Marty, but no matter which rock is hiding this closet virtuoso, Marty is the household name, and for the task at hand, he is Guitar God du jour. Ever since exploding onto the scene with best friend and musical twin Jason Becker, Marty has thoroughly demolished everything the world thought it knew about how to play the guitar. Aside from it being poor form to get into some guitar-geek academic debate of Star Wars versus Star Trek, by comparing his innovations to everyone from Jeff Beck to Eddie Van Halen, it is a non sequitur because every great player stands upon the shoulders of the giants who came before. However, it does stand to reason that the bar that had been set by the likes of Eddie, Randy, and Yngwie was given a swift kick by Marty, Jason, and also Paul Gilbert.

In many ways, what makes Marty so special is he plays guitar with an accent entirely his own, while covering styles ranging from full-on thrash to gentle unplugged Eastern melodies. One could unstrap Marty’s guitar, fully plugged in and dimed, and hand it off to 100 other world class players, and no one would do Marty like Marty. His phrasing, his vibrato, his bends, and his dynamics are even more Marty than his most triumphant hairdo.

This week, we are blessed with an equally triumphant live release: “One Bad M.F.” In April of this year, Marty unleashed a brutal career-spanning set upon the unprepared in Mexico City. This live album is the complete recording of said onslaught. Keeping in mind Marty’s career has significantly metamorphosed since the Shrapnel Records days, and most significantly around his Megadeth period, this live set does healthy service to just about every period of his career. The only area not fully represented is some of his more delicate and intimately reserved writing and playing on albums like “Scenes” and “Introduction.” This makes practical sense for a pumped-up high energy crowd ready to kick ass in Latin America. 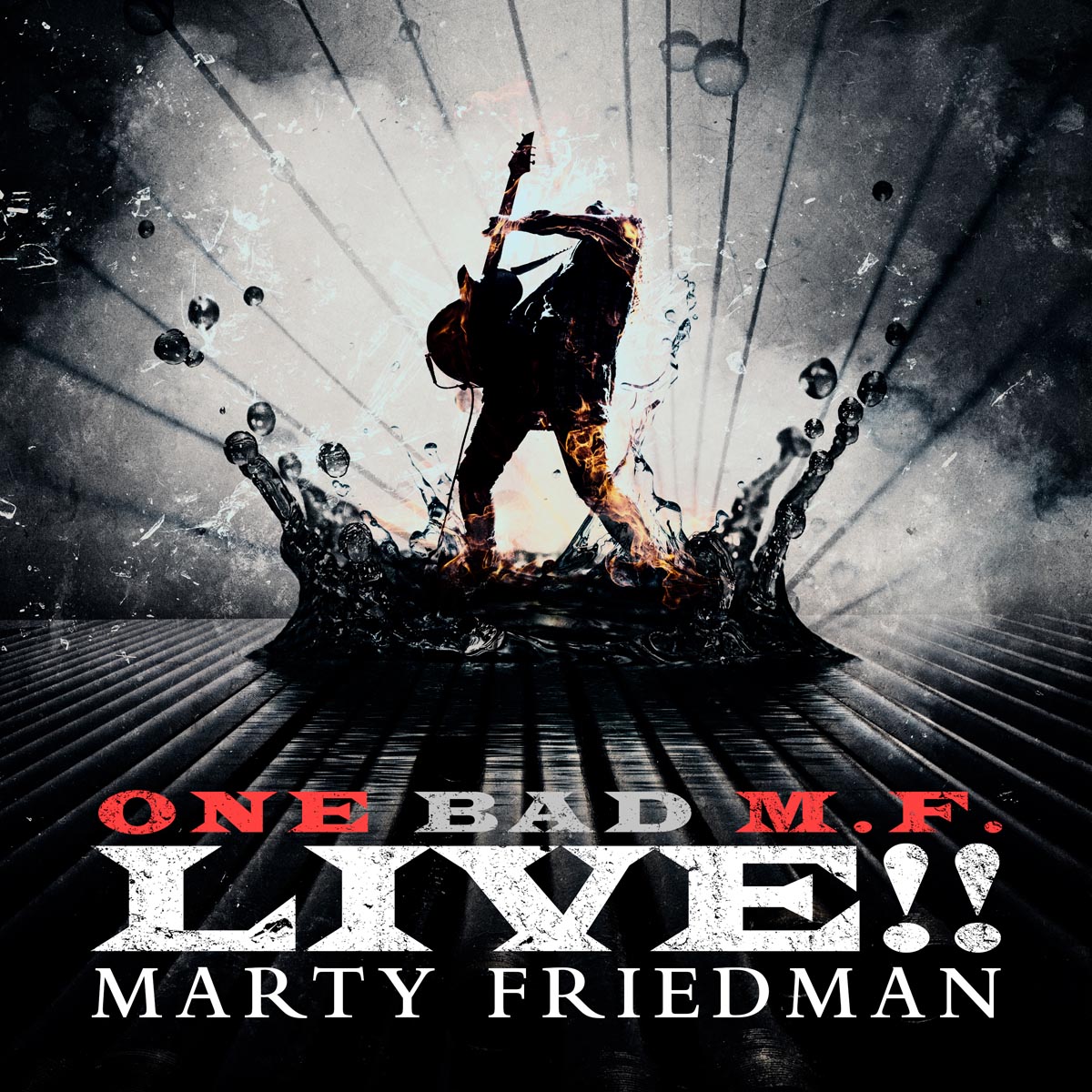 Marty is backed up on guitar (both on rhythm and some very respectable lead melody work) by Jordan Ziff. Kiyoshi handles electric bass, with Chargeeee on drums, pronounced Char- Jeeeee. Following Marty’s departure from Megadeth, his material has danced with non-thrash elements from blues to pop, much like the later solo work of fellow Japanophile Paul Gilbert. Of course, at other times, Marty lets his inner shred-child out of the basement to go ape on the six strings. The live set starts with a middle-period gem, “Street Demon” from 2006’s “Loudspeaker” album. It is the right blend of fun poppy grooves and hooks, interlaced with healthy headbang action, and some sick chops, not to mention some absurd showcasing of the band’s bass and drum skills. The band follows up with “Elixir” from the same album, which ups the heavy ante even more. The third track is “Amagigoe”, a Japanese cover from his 2009 “Tokyo Jukebox.” The track is a straight up rocker with plenty of opportunities to show off. Think of it like Vai’s “Crying Machine”. In case the crowd had almost recovered from being knocked backwards on their heels by the previous three numbers, the band unleashes “Inferno”, a psychotic blisterfest from the 2014 album of the same name. “Inferno” is almost like someone went up to Marty and challenged him as such, “Ten thousand yen says you can’t write and play something like Dragon’s Kiss.” And Marty said, “Hold my Sapporo.” The speed and execution of that song is off the charts, and the band delivers it perfectly live, which may be an even greater feat than the original studio recording.

The next track, “Self-Pollution” at least has some mellow moments to give the crowd a chance to regain their collective composure, and “Devil Take Tomorrow” continues this break to some extent with some ballad blues leads which are a lullaby compared to the rest of the set. The break is short-lived, because the “Mutation Medley” demolishes the audience with some killer Kiyoshi fingerstyle bass, before launching into a medley which reaches crescendo of “Forbidden City” and even the vaunted “Tornado of Souls” solo, a crowd-pleaser to say the very least.

The “Ripper Medley” continues the insanity with material ranging from early Marty mega-leads all the way to Champions of the World and More Than a Feeling.  Rather than ruin the rest of the album and the setlist, suffice it to say this tour du force never lets up, and delivers the goods right up until a spectacular surprise homage to the King himself. All we can say after being stunned by such an amazing live set is “Majipanee!” If you want to find out what that means without horrifying people on the Tokyo streets, do yourself a big favor and pick up this treat at Marty’s site here.

No matter how much we love lead guitar wankery (especially when it is the meaningfully intelligent kind delivered by Marty), it is usually hard to imagine a one hour live set that would score well as a live album when compared to traditional bands with lyrics and keyboards. However, Marty’s band did something special on this live album: an instrumental guitar live performance that endears and entertains from beginning to end. Bravo, Marty. Shinjirarenai!