Out of the frying pan and into the fire. So it seemed to be for iamthemorning‘s Marjana Semkina (henceforth spelled as Mariana, to be in-line with the stylized alternative spelling accompanying this album release) upon the completion of the duo’s wonderful 2019 album “The Bell”. For those who follow her social media presence or crowdfunding initiative on Patreon, it seemed like the very moment that Semkina and her fellow iamthemorning colleague Gleb Kolyadin finished production on that album, Semkina was already posting videos depicting her hard at work in the studio again, teasing what was next, giving us all a feeling of déjà vu. Yet, here we are, on the cusp of the debut solo album from the iamthemorning chanteuse and songwriter, who is always hard at work, finding new and sonically enchanting ways to invite us into her alternating dark and whimsical worlds of introspection, Mariana Semkina‘s “Sleepwalking”.

iamthemorning functions as such an entity of equal and complementary hemispheres that when iamthemorning‘s pianist and co-songwriter Kolyadin released his solo album roughly two years ago, it was interesting seeing how one half of the iamthemorning mind functions without its other half. Most of us hoped, but never assumed, we might someday see how the Semkina half functions. And it’s every bit as good as I hoped (and after its announcement, assumed) it would be. For existing iamthemorning fans, a desire to own this album is a no-brainer (no pun intended) and it’s exactly what they’d be hoping for. But for those less familiar with the band, or who have come about it from other avenues – perhaps through an interest in guests such as Craig Blundell, Jordan Rudess, or Nick Beggs – many might not know what to expect here. And, admittedly, even for IATM faithful, there are some curveballs here and there, such as the sinister chord progression over Portishead record scratch ride cymbal early moments of later song “Everything Burns”. 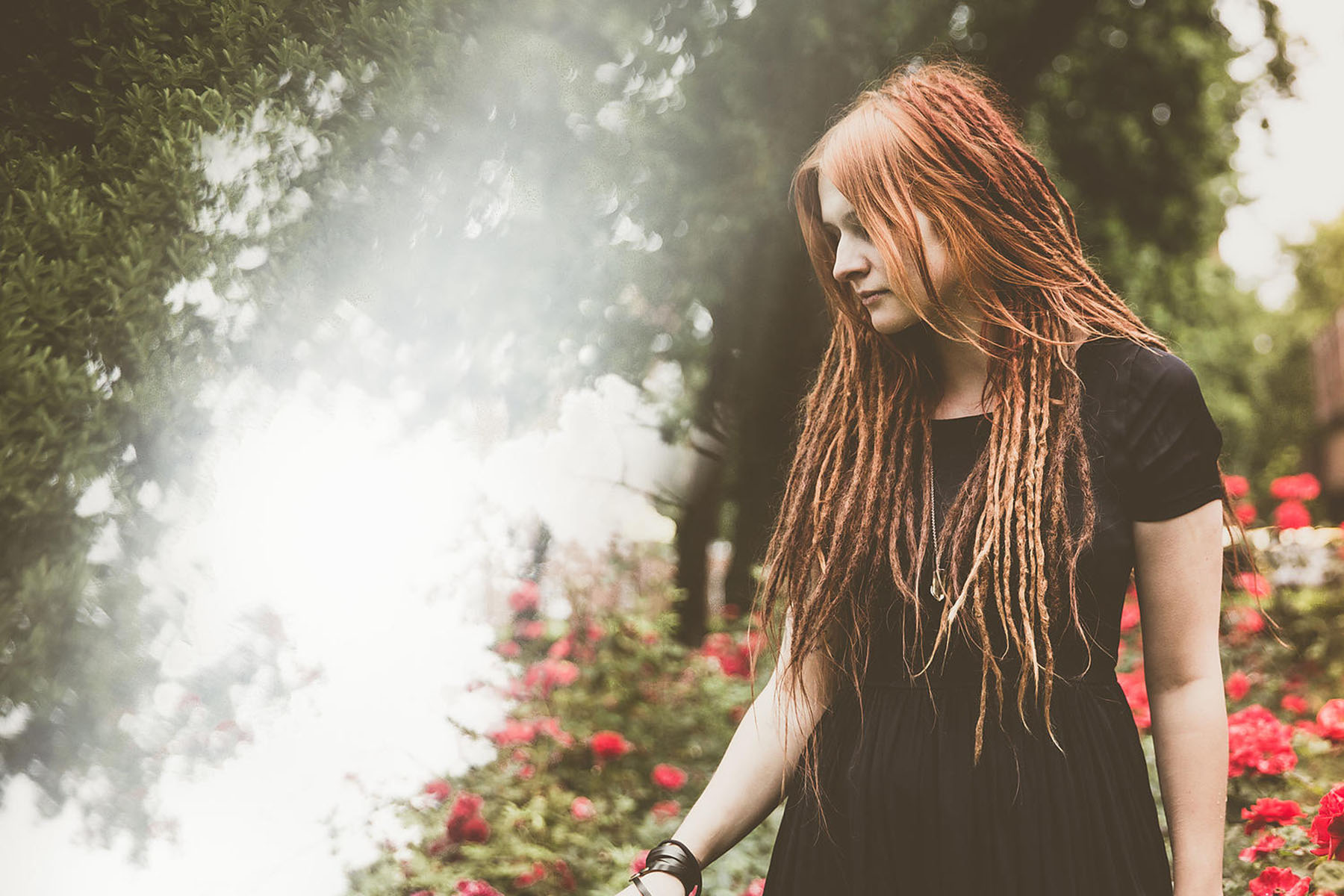 First off, leave any concepts (again, no pun intended) of “prog” at the door. iamthemorning plays to a prog-rock crowd these days, most likely because they are too unique to be embraced by other scenes (such as other modern bands like JOLLY or The Tea Club, who constantly rail against what “prog” means). Many try to match a square peg and a round hole with somewhat low-hanging fruit comparisons such as Tori Amos or Kate Bush, when such likenesses only run so deep. Semkina has taken the patented iamthemorning sound, and along with longtime collaborator (and audio mad scientist) Vlad Avy, has created a dark fantasy world of equal amounts of minimalism and lush grandeur, with more in common with artists like Goldfrapp, Lunatic Soul, or Crystal Bright and The Silver Hands than anything so pop-centric.

In some ways, “Sleepwalking” (which is a perfect title for a Mariana Semkina solo album, by the way) is even more adventurous and uncompromising than iamthemorning tends to be, as it is Semkina fully unleashed. Where iamthemorning is a constant and enduring relationship of give-and-take and fruitful, wonderful collaboration, this album is an artist’s visions fully realized, painting with a palette of infinite colors. While there are no out-and-out rockers like iamthemorning classics “The Howler” (from “Belighted”) or “Freak Show” (from “The Bell”,) there are still moments of variety on this album to keep it very far from being homogeneous. The most “rock” songs on the album are, of course, the two that feature the aforementioned Craig Blundell on drums and Nick Beggs on bass, and are excellent, driving songs that propel the album forward quite well. Otherwise, though, every song is sort of a roll of the dice of what you’ll get. The album opener, “Dark Matter,” is pretty much perfect to set the scene. It’s exactly what one would hope for and want from Mariana Semkina in a solo effort. And honestly, many who are less familiar with her or Avy‘s work together (as aside from playing all guitars, and handling mixing and mastering duties, he also helped with writing and arranging, alongside pianist and multi-instrumentalist Grigoriy Losenkov) one could assume the album would be varying hues of that same color all throughout. And yet, for those who only listen marginally closely, there is so much more going on all the way until the end. 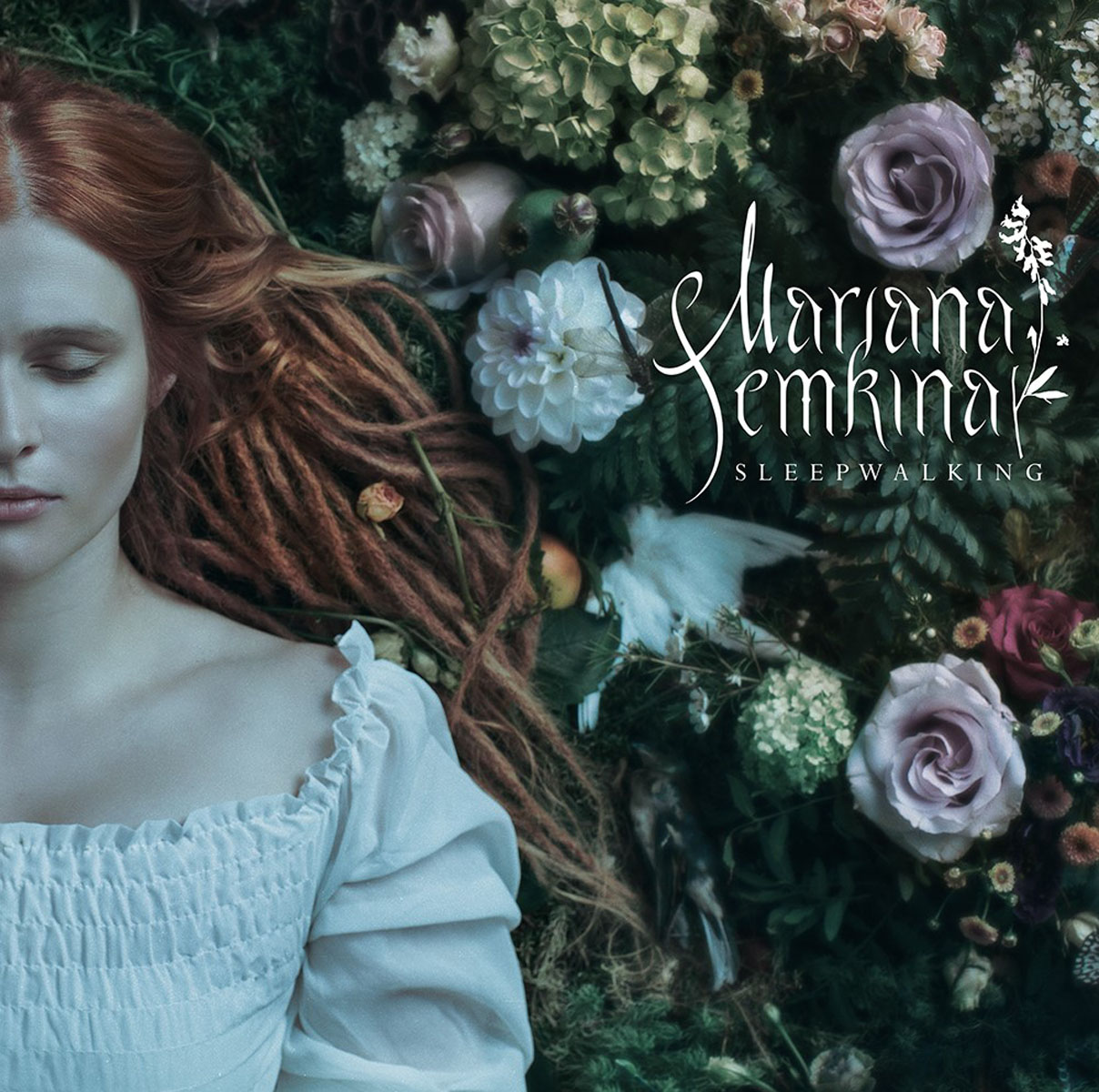 As much as we love Gleb Kolyadin here at Sonic Perspectives, the lack of his presence on the album opens up a world of opportunities for Semkina to play with instrumentation she might not normally be able to call upon in iamthemorning. St. Petersburg Orchestra “1703” is present throughout an incredible amount of the album, and adds so much to the sonic landscape of the work. But without piano (or keys) at the forefront, we hear so much come through in the masterful (third time, no pun intended) mix from Avy – harps, harpsichords, symphonic percussion such as vibraphones and marimba, acoustic and electric guitars, strings galore (both arco and pizzicato), fretless bass, ambient drones and glitch elements, and yes, even some piano from both Losenkov and from Jordan Rudess on the final song. But the overall audio quality of this work is massive and commanding. Long before I would compare Mariana Semkina to Kate Bush, this reviewer would much rather compare the overall work to one of the great landmark albums recorded at Peter Gabriel‘s Real World Studios. If this is what so-called independent music is doing in 2020, then the post-Napster music world is quite a bit brighter than many would credit it.

As loathe as a reviewer might be to admit it, there are certain biases when listening to music. In our case, I always listen to music and melodies before lyrical content. But after several albums of Semkina material in my mind, I know how important the lyrics are in these works. Honestly, as a listener who has struggled in the past, albums like iamthemorning‘s “Lighthouse” can occasionally hit a little too close to home, and Semkina‘s lyrics can, at times, be more unsettling for the listener than comforting. But damn, if they aren’t beautifully written (especially for a non-native English speaker). Overall, the lyrical themes of “Sleepwalking” remind me of my favorite iamthemorning song, “Gerda,” from the band’s sophomore album, “Belighted”. With lyrics like “I know you’ll always be / The one to follow me / So let us drown together / Drown in the sea,” there are so many cathartic feelings wrapped up in so relatively few minutes of music… feelings of despair and melancholia, but also strength and anger, with sprinklings of “fuck it all,” and maybe even a tiny glimmer of hope here and there, such as the song “How To Be Alone.” After iamthemorning‘s 2019 release, “The Bell,” which preceded this album in Semkina‘s overall discography, and was a bit of macabre fun at times with stories of dead Victorian girls, it’s refreshing to see such a strong and delicate work of personal thought and reflection coming from one of the more poetic lyricists and souls in modern music.

The musicians associated with iamthemorning – Mariana Semkina and Gleb Kolyadin, but also their collaborators such as Charlie Cawood and Evan Carson – keep raising the bar higher, but with IATM’s last release and Kolyadin‘s debut solo album before that, the bar has become set ridiculously high. And yet, Semkina, in her first solo offering has added another fantastic album to the collection of output from the IATM braintrust. It has been very interesting dissecting the iamthemorning sound, and analyzing each half of the duo’s solo output on their own, and now when listening to one band member and missing the other, there is an option to listen to the other one without simply playing iamthemorning. And yet, Semkina‘s “Sleepwalking” is not just a solo album for the sake of releasing something. It’s a testament to how far she has come as a songwriter and performer, and a testament to poetry being vivified by astonishing musical craft.

We endeavor in all things to be unbiased here at Sonic Perspectives, but after reviewing a third work involving members of iamthemorning, I must confess to professing a love for what they create. Mariana Semkina's Sleepwalking continually defies expectation as the album opens up and expands while it plays on, a tribute to strong songwriting and arranging from start to finish. Not just a typical album defined by its guest artists, the musicianship here transcends the contributions from Beggs, Blundell, and Rudess, to become a labor of love from a small group of dedicated and passionate musicians. And again, keeping in line with the level of quality long since established by iamthemorning, that tradition easily carries over to the first of what's hopefully many solo albums from Mariana Semkina, sounding bold, adventurous, exciting, and incredibly fresh on any set of speakers.