Even those beings made of darkness can seek out the light, and even shadows can steal glimpses of sun. A temperance of light among the overwhelming power of shade is the pursuit of the latest album from blackened deathcore act Lorna Shore. In a way, this third studio album is a victory and a testament to the strength of persistence as the band emerges from their own period of darkness, still holding high the richness of “Immortal” as an offering to all of those that dared to doubt their resilience. After vocalist CJ McCreery was removed from the band in late 2019, the remaining members Lorna Shore chose to press forward with the release of “Immortal,” an unquestionable tribute to their pursuit of art drawn from dedicated passion.

Though it is yet to be seen if the band will prove to be immortal themselves, the legacy that they have built within the deathcore scene since their inception in 2010 has laid the foundation for their place in metal immemorial. Marked first and foremost by their aggression, Lorna Shore has an unwavering penchant for all things caustic, with face-melting breakdowns and guttural growls that could split pavement. Invoking the unholy with gravelly vocals and dissonant shrieks, “Immortal” conjures images of a world drenched in sulphurous hellfire, succumbing to an unwavering onslaught of thundering drums brought on by drummer Austin Archey.

“Immortal” is more than a mere re-imagination of the same extremities of hell-on-earth that the extreme metal scene favors. Rather, this album is embroiled in an epic battle between darkness and light, grandiose touches of choral vocals and keys layered in equal measure with calculated growls. Much in the same style as the orchestral majesty of black metal act Dimmu Borgir, Lorna Shore refuses to be bound by the typical conventions and expectations of deathcore, resulting in a multi-faceted album that captures listeners with its seemingly infinite depth. 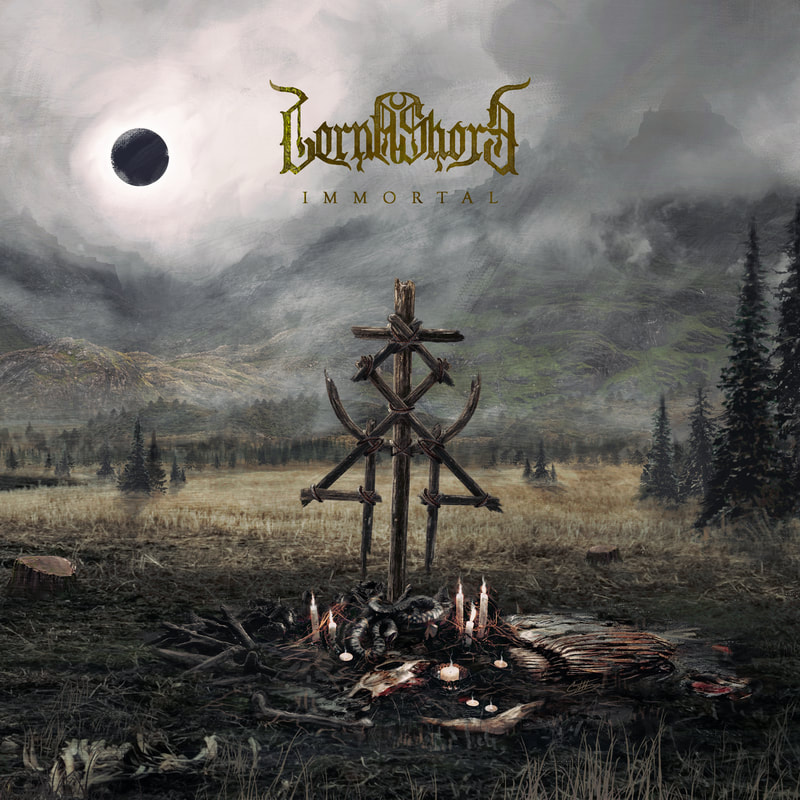 Laced with obscenities and poetic grace in equal measure, the lyrical value of “Immortal” is only the beginning of the layers comprising this latest effort. Foremost is the stunning heavens of “Hollow Sentence,” opening with a graceful choir and gentle keys before screams tear through their false sense of solace. But even as drums make their entrance and persist at full tilt, the angelic harmonizations carry on, the song developing two distinct faces, a battle between agony and redemption that rages on two parallel planes. As the orchestral wages war with the sonic depravity of McCreery’s vocals, the two elements grow ever more intertwined in an audible transformation from resistance to acceptance. It would be no exaggeration to say that “Hollow Sentence,” for all of its brutality, is also beautiful.

The portrayal of some intangible battle is a theme that persists throughout “Immortal,” also showcased in the unforgiving march that fills the body of “Warpath of Disease.” With repetitive motifs throughout, “Warpath of Disease” embodies the dread of an inevitable progression, be it of disease or an abstract fate even more abhorrent. Within this track there is also a flair that derives from the complexities of tech-death, masterful riffs that spring from the fingers of the accomplished guitarist Adam DeMicco. As one of the driving forces of the band, his command over the guitar brings “Warpath of Disease” from a scene-setting piece of filler to a multi-tiered exploration of sound that pushes beyond the boundaries of the subgenre.

Given the orchestral elements and tech-death touches, the tapestry of “Immortal” hovers somewhere within reach of the cinematic, but continues to be bludgeoned by brutal breakdowns and growls that seem as though they were born up from the underworld. Touches of black metal thrive in the static opening “King Ov Deception,” which also has a much more high-octane speed than many of the album’s other tracks. DeMicco’s guitars are more vibrant here, taking on a heavy metal sheen, and shining as a star in the mix rather than serving as the inevitably gritty cattle prod.

Variation in speed keeps the momentum of “Immortal” rolling from start to finish, with a variety in hooks keeping each subsequent track equally irresistible. “Immortal” is a strong pillar in cementing the style Lorna Shore have pursued since their first full-length album, but it is here in “Immortal” that they seem to have finally cast aside fear in the favor of staying true to their occasionally eclectic creative vision. It is a vision colored with the lush flavors of heaven, yet it is born of a fury that resides in the dredges of humanity. This contrast is a portrait that Lorna Shore have captured with an uncanny precision, but it’s up to the listener to determine if “Immortal” has enriched their soul, or done away with it altogether.

Lorna Shore have called on the powers of heaven in the same breath with which they summoned the strength of hell, crafting an album that stages a holy war of epic proportions. Cinematic majesty and astounding brutality combine for an unexpectedly emotional wave of aggression that persists in the listener’s heart and mind long after the music stops.