So begins the latest installment from Germany’s Long Distance Calling, and if that’s got you a little confused on what they’re trying to say, you are not alone. From the emotionless audio snippets about life delivered by robotic male and female voices, to the L.Ron Hubbard-esque album cover artwork, “How Do Want to Live?” has many familiar aspects of a concept record. But after multiple listens, this reviewer really isn’t clear on what exactly the concept is. And maybe it just doesn’t matter.

Given that Long Distance Calling is, for the most, an instrumental rock outfit, the mystery is even denser than trying to decipher the story-line of Queensrÿche’s “Operation Mindcrime” or Dream Theater’s “Scenes From a Memory.” There are no lyrics to analyze or interpret (with the noted exception of the track “Beyond Your Limits”). Just some short song titles, solid and engaging rock instrumentals with spoken word sections overlaid that merge into a creative sonic tapestry for the mind.

Much like Joe Satriani, Long Distance Calling has taken up the daunting challenge of delivering guitar-based rock instrumentals while attempting to keep the listener’s interest. But whereas Satriani “sings” with a lead guitar playing easy to remember melodies, LDC is more about setting a mood without a firm verse and chorus structure. They’re more “ambient” than “am I going to hum this” later. That puts a lot of pressure on the performance and production to make it a positive aural experience, and in this vein they have a number of records in the catalog that deliver.

Their previous effort, “Boundless” was particularly strong, and by way of comparison, “How Do We Want to Live?” doesn’t top out quite as high, but still takes flight. The spoken word parts are at times annoying or repetitive, and while they may add a bit of color to the concept, they’re not a particularly helpful addition over multiple listens. The intro to the final track of the concept, with a robotic sounding voice accusing the human race of being a virus is exemplary of both the point and criticism of the spoken parts of the release. The record seems to raise questions about the potential opposition between humans and artificial intelligence, and the risks that occur when the lines of distinction become blurred. But if all this Terminator-like talk isn’t really your thing, it’s okay, you can still find value in this sonic soundtrack of a futuristic film within your mind that is characterized by appealing songwriting, melancholic vibes and an overall interesting listen. 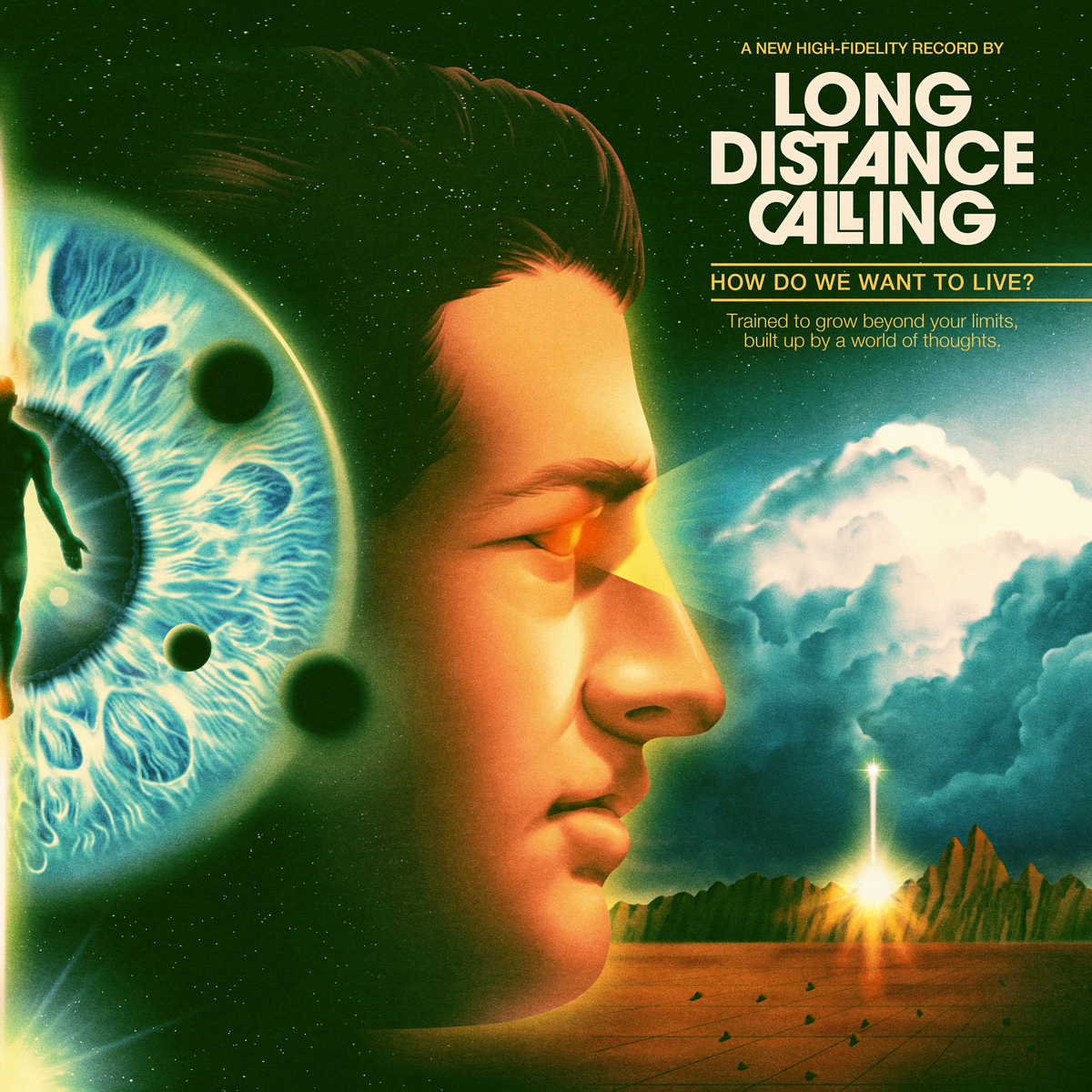 “How Do We Want to Live?” Album Artwork

“Curiosity (Part 1)” establishes the tone of the release with some atmospheric building tones and spoken passages the echo for dramatic effect and succeed more in terms of vibe than the actual content of the passages. An electronic, pulsing keyboard pattern lures the listener into “Curiosity (Part 2),” where the techno vibe is shattered by pounding rock drums that usher in the typical Long Distance Calling sound. With a David Gilmour-like solo tone meandering over melancholy scales, the track is a pretty good summation of what to expect on the record, with shifting intensity and simple but catchy hooks that steer more toward tone than technicality.

“Hazard” opens with a straight forward drum pattern that instantly spotlights a totally different snare drum sound than on the previous track. In headphones, one can appreciate the subtle percussive additions to the basic drum track, revealing the multi-layered elements that polish out the recording and add more ear candy with strong production sense. A mid-song break leads into a spoken passage about the threat of AIs, which gives way to a rocking, power chord based riff that one can only imagine would be even better live when the amp is rumbling the rafters. A solid song.

The next track, “Voices,” also opens with a simple marching drum beat, soon to be accompanied by a modern keyboard patch bass lines, followed by guitar harmonics, whooshes, and voice patch layers. The song builds like layers of a cake, eventually yielding to a familiar guitar tone that harkens back to Floyd’s “Another Brick in the Wall.” It’s familiar, but was great in its original form, and it works here, too. “Voices” shines here like a lot of LDC tracks as a sweeping, building soundtrack that keeps evolving enough to stay interesting to the focused listener, but for those less engaged, provides an unobtrusive background listen. If you’re looking for lead lines that sound like vocals, you won’t find them here. Just a steady ebb and flow with musical riffs that rock without signature melodies all over the map.

“Fail/Opportunity” relies on some modern key patches and authentic sounding strings patches to evolve into a bleak sounding support system to something undefined that’s happening. Again, there’s a futuristic film vibe that leaves much open to the imagination of the listener. This could be viewed as a point of praise or criticism, depending on the listener’s expectations and objectives. For the task of writing while having something in the background to keep me focused, Long Distance Calling’s steady but unobtrusive nature is particularly welcome.

“Immunity” opens with a very retro Tangerine Dream – sounding pulsing keyboard (who coincidentally were also a German act). The song is a steady builder that morphs into some dirty sounding distorted guitar-work half way through while the drums cascade and pound on the toms to grow more frenetic and heavy. The riff gets sledgy as it nears the end, making for a strong, dynamic track.

“Sharing Thoughts” wafts in with a delicate piano tinkling and airy atmosphere that sounds like ending credits to a suspense thriller. One minute in, the atmosphere is shattered by the entrance of drums and guitars that layer and build to a hypnotic saunter with cascading staccato notes that again are reminiscent of Porcupine Tree’s “Voyage 34,” which was reminiscent of Pink Floyd’s “The Wall.” It’s not original, but still sounds really cool. Panning and separation of the instruments in stereo adds nice production flares displayed throughout the record.

In the past, the band has called on more familiar names for guest pipes, such as John Bush (ex-Anthrax, Armored Saint) and Jonas Renske (Katatonia). This time the band breaks the instrumental mold on “Beyond Your Limits” with guest lead vocals by Eric A. Pulverich of the band Kyles Tolone. The band was introduced to him through their producer, Arne Neurand, who produced the album in Horus Sound Studio in Hanover. It must be said that the sonic quality certainly contributes to the overall positive listening experience of “How Do We Want to Live?”

“True/Negative” opens with a distorted, robotic voice commentating on the rebellious nature of humans, followed by a bleak, industrial track that sounds like it was meant to accompany footage of robots being assembled in a factory. It’s short and perhaps the weakest point of the record purely as a standalone track. “Ashes” ushers in the ominous ending of the record, with an AI voice claiming that “Human beings are a disease, a cancer of this planet. You are a plague, and we are the cure.” What follows is a disparate, lonely sounding track that could serve as the soundtrack of drone footage passing over scorched earth, passing by overturned cars, buildings on fire and a general post apocalyptic landscape.

In the opening track, an AI voice says, “It fills me with joy to make discoveries everyday of things I’ve never seen before.” For the uninitiated of Long Distance Calling, this may be a very prophetic statement to their experience upon first listen to this German act. There’s a futuristic, dismal outlook to the record that is executed with precision and skill so as to be haunting and intriguing as opposed to depressing and dissonant. For a new listener, the band’s previous effort, “Boundless,” is probably a better entry point for discovery, but “How Do We Want to Live?” is a respectable new addition to the band’s ever-growing catalog.

“How Do We Want to Live?” Tracklist:

The German instrumental rock outfit adds another solid contribution to their discography with some catchy, hook laden riffs and jams that lean towards a more futuristic, electronic vibe than previous efforts, but continue to captivate the listener and serve as a solid soundtrack to life activity. The strong music is at times annoyingly disrupted in flow by spoken word sections that get in the way more than they contribute, but the release offers a new twist on a successful blueprint that has made Long Distance Calling a safe bet on nearly every release in their canon