First, the good news: John Mitchell is incredibly prolific, and right on schedule (every other year since 2015,) we are due for another Lonely Robot album. Next, the bad news: Under Stars marks the end of the initial Lonely Robot trilogy, and for all intents and purposes, the future of Mitchell‘s much-beloved solo project is uncertain.

Let’s back up the spaceship for those who are just joining us. John Mitchell is sort of an unsung hero of the progressive rock community. You’ve almost undoubtedly heard him on some album in the past couple of decades: his foremost claim to fame is as Francis Dunnery‘s successor in It Bites; many might know him from his ongoing work with Jem Godfrey in Frost*, where the two are the most consistent members of the band; some might know him from his on-again / off-again project with Pete Trewavas (Marillion, Transatlantic), KINO; and of course, as has been playing on my mind in great abundance over the past year, Mitchell is an over 20-year veteran of Arena, alongside Clive Nolan (Pendragon), Mick Pointer (ex-Marillion) and a couple of other really talented, crazy cats. He stays incredibly busy, and churns out a staggering amount of top-notch prog rock. The idea of getting caught up on his entire back-catalogue is a bit dizzying, honestly, and that’s always a great challenge to accept.

Lonely Robot is his first true solo project (aside from his John Mitchell EP, “The Nostalgia Factory,” the inaugural release on Mitchell‘s recently-founded indie label White Star Records, alongside founding partner Chris Hillman). For many, including this reviewer, Lonely Robot was the gateway to an incredible body of work in the past, which is a large amount of music any musician should be proud to have played on, composed, or produced. The 2015 album Please Come Home was a great entry point for any new fan, or older fan excited for a new venue for Mitchell‘s music – a crossover prog buffet of finely-crafted songs, without an overabundance of music, full of instantly memorable melodies, interesting concepts, and thoughtful lyrics. And while The Dear Hunter might be the master of creating albums based around color and hue in this corner of the musical universe, the three Lonely Robot albums do a fine job of matching musical tone to color, as the “red” album Please Come Home was followed up barely two years later by the “green” album in the trilogy, The Big Dream. That was another fine album in his discography, a bit more of a grower than its instantly lovable predecessor, tackling some interesting Zen-like topics, as opposed to the first album, which sent the trilogy’s astronaut protagonist searching for answers to humanity’s origins. And now, a scant two years later, here we are again, with what could be considered the “purple” album in the series, and the series finale, Under Stars. It sees us bidding a fond farewell to the astronaut, as he conveys the final topic of pondering from John Mitchell, a look at ourselves and how we decide to exist in this current modern age. 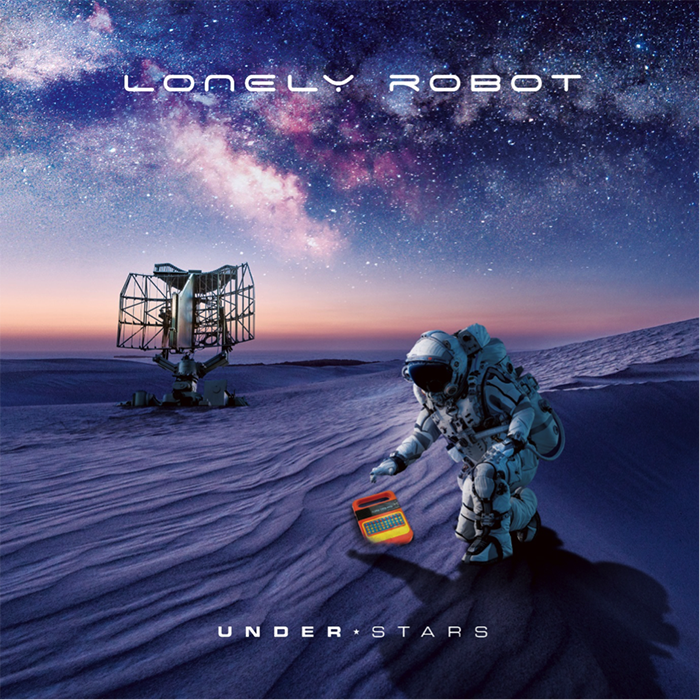 The interesting thing about the colors of the albums, derived from the albums’ front artwork, is that if the listener sits back and really thinks about the artwork and the feelings inspired by that color, and continues listening to the entire album, it actually fits. While Mitchell hasn’t – from what we’ve found – outright called this the purple album, its artwork suggests it likely is, and like its two predecessors, its music definitely fits the images conjured in one’s mind from the color scheme. (Keen-eyed fans will also notice the message on the Speak & Spell clutched in the astronaut’s glove.)

Mitchell teams up once again with one of the finest drummers out there right now, Craig Blundell, as he has with every album in the trilogy, as well as when KINO needed a new drummer for 2018’s Radio Voltaire. From what we saw on social media, Blundell traveled to Mitchell‘s Outhouse Studios and learned and tracked all of the drums for the album in one day’s session, between finishing up his lengthy run on Steven Wilson‘s To The Bone tour cycle, before hitching up with Steve Hackett‘s 2019 edition of the Genesis Revisited tour. It’s a miracle these albums in the tiny progressive rock corner of the music world even come together sometimes. Blundell‘s drumming is as rock solid as it has been on any of the other albums he has played on, which I have reviewed here at Sonic Perspectives: KINO‘s Radio Voltaire and Semantic Saturation‘s Paradigms. With each album release, each tour stop, each incredibly honest and insightful Facebook post, Blundell proves why he is in such high demand from some of the biggest names in the genre. On roughly half of the album, Lonely Robot live band member Steve Vantsis has some well-placed contributions, coming up with bass guitar parts that Mitchell himself noted in our recent Sonic Perspectives interview he would not have written or played himself, which throw in a new dynamic element to the albums.

Musically, Under Stars does not break a whole lot of new ground, either for Mitchell or otherwise. It’s slightly different from its two predecessors, in it has moments infused with ’80s synthwave pop, as in one of the best songs on the album, “Icarus,” the opening of which sounds like it would be right at home in a Stranger Things trailer or a very special episode of GLOW. The album is also incredibly melodic and has great flowing choruses that just burst to life when carried by Mitchell‘s strong and smoky voice. It has a couple of its token rockers in “Ancient Ascendant” and “When Gravity Fails,” but these are vastly outnumbered in more mellow and introspective songs such as the “Authorship of Our Lives,” which has such a tender opening that it starts the tear ducts into warm-up mode every so slightly, and the title track itself, which is utterly sublime, with the chorus showing off much of the range of Mitchell‘s voice, as well as how gently he can play his guitar, both in rhythm and lead. The best moment on the album, at least for this reviewer, was the secondary single off of the album, “How Bright is The Sun?” It is quintessential John Mitchell. The chord progression is spot on, right in the feels, and the piano intro is pensive and beautiful. And there is also a tender sadness, a sense of longing, or even mourning. It seems to embody the tone of the album better than any other song on the album. For longtime fans of the project, the final song, “An Ending,” should feel like, well, coming home. Out of fear of spoilers, let’s just leave it at that for now. But it’s something to look forward to, and to cherish, at the end of both the album and the trilogy.

All three Lonely Robot albums are a fantastic example of the more crossover side of prog, and while last year’s KINO album had moments which would fit in fine with the trilogy, Under Stars feels like the definitive final statement needed in this body of work. As an album in its own right, it’s quite good, not an instant classic, but very fine. But when considered alongside the other albums, as a complete picture, it works together with them very well. It might be a bit too light for listeners expecting a bit more pyrotechnics to finish off the collective adventure, but for those looking for something a bit more sublime, showing off John Mitchell‘s tender side, or giving more of a glimpse into the inner workings of his mind, personality, or social views, more than what we would get in an Arena album, for example, there is much to enjoy here. After my initial listen to the album, I came back to it the next day, and listened to it as the final piece of the Lonely Robot trilogy, following Please Come Home and The Big Dream, and it was incredibly gratifying having sort of a The Lord of The Rings-style marathon with the music I have loved for the past four years or so. Mitchell has teased he would like to organize a performance of all three albums in a special “an evening with…” setting, and we should be so lucky to see that happen someday. It’s highly recommended any fan of Lonely Robot should try the mini-marathon for their own sake, before passing final judgment on this final curtain of the project.

For those of us who have been following Lonely Robot and the astronaut on this adventure since the beginning, there is a sadness to this ending. The past four years have gone by so quickly, we're getting done when it seems like we were just getting started. And yet, we have three full albums of overall outstanding material to cherish for a longtime to come. New listeners to this project should not start here. It's not that kind of album, but for those who have been along for the ride this entire time, it's as good of a way to end things as one could have hoped to receive.