John Petrucci, Mike Portnoy, Jordan Rudess and Tony Levin must have heard the question over a million times: will Liquid Tension Experiment ever reunite for another album? The answer was often the same. There are currently no plans, but you never know. Fans of complex unisono lines didn’t dare to believe it when a couple of months ago Rudess teased that there was something in the works at LTE camp. In December of last year, a picture posted on social media left no doubt: 22 years after their last studio release, the supergroup will celebrate their reunion with an album of all new music. “LTE3” was secretly written and recorded at the Dream Theater Headquarters in July 2020 and will see the light of day this April.

With initial excitement over new music from the band came a feeling of concern, since the reunion of a supergroup after a long hiatus can pose problems. The quartet joined forces for the first time in the late 90s and went into the studio to create something new with no expectations from fans or themselves. The first LTE album was met with critical acclaim and, astoundingly, a second attempt was able to repeat this success. Not only would recreating this magic for a third time be a difficult undertaking. The band would also have to walk the fine line between delivering the “classic” LTE sound and not repeating themselves. Could the chemistry these four musicians had all those years ago be transported into today’s times with everything that’s changed in their lives?

“LTE3”’s lead single “The Passage Of Time” gave us a gasp of relief. It seems this seven-and-a-half-minute chunk of progressive metal was purposely created to be released as the album’s first taste as it contains a lot of what LTE is all about. Badass riffing, groovy bass lines, some big melodies – and the much-missed chemistry between Portnoy and his former bandmates. “The Passage Of Time” might be a safe pick for a first single. But it assured that it’s safe to get ready for the hourlong shred fest we’ve been waiting for.

And the album continues to give fans what they had asked for. The opener “Hypersonic” is exactly what its name suggests, but luckily doesn’t make the mistake of trying to be another “Paradigm Shift” or “Acid Rain”. Instead, it takes a less groove-oriented approach. Rudess’ selection of keyboard sounds and his harmonic contributions are reminiscent of Dream Theater’s work around the turn of the century and may bring a nostalgic smile to the faces of longtime fans. This bodybuilder of a song screams “you guys want LTE? We’ll give you LTE!”, and proceeds to shove riff after riff down the listener’s throat. It makes clear that the whole band is in peak form and that their fingers seemingly haven’t aged a day in the last two decades. Imagine the 74-year-old Tony Levin telling his grandkids he has a new album out and then “Hypersonic” starts playing… One might say this track only wants to prove that these guys can still fit half a million notes into one second. Then again, isn’t that exactly what we’re here for?

The album opener is one of unfortunately only two exceptions that feature the project’s characteristic quirkiness and at times over the top fiddling style. It is audible that in a way the musicians have “grown up” a little since their last encounter. The other exception from this is the first cover song to appear on an LTE studio album. George Gershwin’s jazz/classical-mashup “Rhapsody In Blue” was a live staple on their 2008 reunion tour but had never been recorded in the studio. LTE took a similarly humoristic approach to adapting this orchestral piece into a rock band setting as Emerson, Lake & Palmer did 50 years ago with “Pictures At An Exhibition” and incorporated bluesy vamps and extended jammed solo sections into the arrangement. Don’t let the fact that it’s a cover distract you. It’s virtuosic, it’s goofy, it’s heavy, it’s the secret highlight on this album. One can only hope that the guys will take this to the stage again once safety measures allow it.

“Beating The Odds” seems to celebrate these four musicians, well, beating the odds of them ever playing together again, with an upbeat Alex Lifeson-inspired main riff and a triumphant melody that wouldn’t have been misplaced on a Neal Morse album. But apart from the racing solo spots during the song’s middle part, the song is not nearly as appealing (to me) as a comparable upbeat composition like “Universal Mind” or “Biaxident”. It sounds like a late-era Dream Theater instrumental with a retro-progressive rock overtone – and is by all means not a bad song. It just might be a bit too straightforward for this project and could have used a sprinkle of that “Chewbacca”-weirdness. And a composed ending instead of the fade-out. 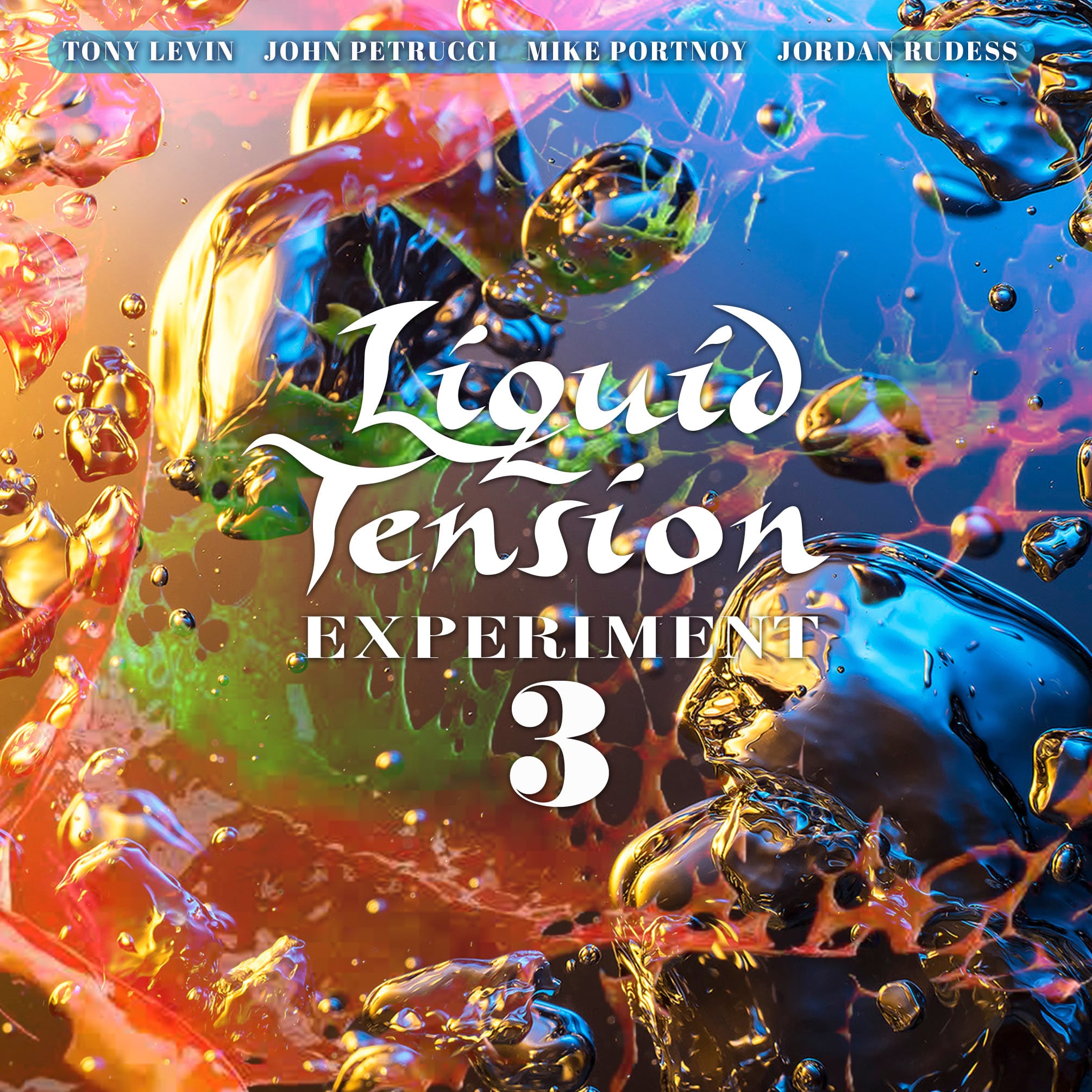 A continuation of the LTE project would not be complete without Chris & Kevin going on a trip together, this time named “Chris & Kevin’s Amazing Odyssey”. This running gag started during the debut’s creation, during which the band’s photographer falsely called Portnoy and Levin Chris and Kevin. While the “Amazing Odyssey” can’t quite hold up with the brief groovy nature of the duo’s bouncy “Excellent Adventure”, it finally captures that spontaneous, improvised and slightly jazzy vibe that makes this project so special. These King Crimson-like jams have always been part of LTE’s sound and unfortunately are far too sparse on the band’s new record. But there seems to be a lot more where that came from as there is an entire second disk of improvised jams that’s not included in the promo release. This makes it difficult to compare the three albums to each other as spontaneous songs had always been incorporated into the main albums before. “Liquid Evolution” features this spontaneous vibe as well and sounds like a brief improvised sketch that could be expanded and varied into something else entirely on stage. Portnoy’s drums sound especially lush when given a little room in the arrangement like here. It becomes evident what a good job Rich Mouser has done in mixing this album, although the transparent late 90s production of the debut album is still unparalleled for me.

Following another tradition in the band’s history, “Shades Of Hope” is an intimate Petrucci/Rudess duet mirroring the Levin/Portnoy (or Chris/Kevin) feature and a follow up to “State Of Grace” and “Hourglass”. Some beautiful melodies and harmonic progressions are worked into this short piece and both musicians prove they are capable of more than shredding. While nothing is wrong with this song and it certainly has its right to be here, it’s probably the weakest cut on the album and the one I could easily have lived without.

The opulent “Key To The Imagination” is opened up by one of Jordan Rudess’ signature main themes that is expected to reappear over the course of the song. Surprisingly, this 14-minute piece doesn’t begin to shift through tempos and themes at such a quick rate as other songs of a similar format, like “When The Water Breaks”. This could be interpreted as monotony by some, or it could be seen as the band keeping focus and letting the themes flow naturally. “Key To The Imagination” thus keeps its pace for most of the time, allowing each musician space to prove what he is capable of. In a band of four musicians of this level and with such elaborate styles it must be hard to balance out everyone’s contributions. It’s in these moments that I realized Tony Levin could have been more upfront in the mix throughout the riff-oriented parts of the album. Luckily, he gets the chance to make up for this during the closer.

“LTE3” contains exactly what you’d expect from this project and this might be its biggest flaw. Of course, that’s a pretty unfair thing to criticize. Who else is supposed to give us the classic Liquid Tension sound if not the Liquid Tension Experiment? And these guys deliver it on a very high level. Although twenty years have passed, the band is in top form. Especially John Petrucci has raised his game again compared to the last three Dream Theater albums and delivers some of his wildest soloing and finest legato lines in a long time. “LTE3” is fast, fun and restless. But it’s also heavier and less groove- and jazz-oriented than the band’s first two outputs and could be considered a “safe” record. It’s a complaint at a high level, but compared to the first two LTE albums, “LTE3” comes in third place for me.

There are rumors that a fourth Liquid Tension Experiment output will see the light of day in the next few years. It will be interesting how the band will expand their sound without the pressure of releasing the perfect reunion album after twenty years. Until then, we have this steam roll of an album to enjoy and will hopefully see Petrucci, Portnoy, Rudess and Levin on stage together again.

After 14 years of hibernation in the recording studio, one of the wildcards in the American progressive metal scene marks its revival with an expansive collection of heavy, rhythmically intricate compositions for the contemplative ear