When talking about extreme metal from Brazil, Krisiun would arguably be one of the first bands coming to mind, alongside with Sepultura. Exactly 26 years ago, Krisiun earned their first published review for the “Evil Age” demo, at that time featured in the Brazilian Magazine Rock Brigade. They were considered a promising young group, showing a clear interest in playing a more “old school” style heavy metal, very much in the vein of Sodom, Deicide and Morbid Angel. The years have passed inexorably, and now they are considered one of the strongest death-metal bands of the last decades, proving time and time again an impressive quality: the inability to produce a derivative album. Their upcoming release, entitled Scourge of the Enthroned continues that trend and is yet another proof of their musical consistency.

As mentioned earlier the maturity these Brazilian have reached in throughout their career is palpable, and their cohesion and musical chemistry is further enhanced by the fact they have kept the same lineup since 1994. Their previous album Forged in Fury left some fans apprehensive with the clean-cut sound and longer songs, but fear not, Scourge of the Enthroned is the band back at what they do best: a 100% take on heaviness and brutality.

The record title track starts with a more cadenced pace, leaving some sort of initial doubt to whether it is Krisiun song or not. All of a sudden guitarist Moyses emerges with an overwhelming riff following by his brother’s militaristic drum beats, and the listener’s senses are taken by storm. The song has everything you would expect from the Krisiun: breakneck speed, polished technique, and the right amount of harshness and aggressiveness: a tempestuous opening salvo to grab your attention by the neck. The following cut “Demonic III” finds the Kolesne brothers showcasing their skills and competence in their respective instruments, with the spotlight stolen by drummer Max, offering a true masterclass lesson of what death metal drumming is about, which pairs perfectly with the staccato guitars. Do yourself a favor and listen to this song while paying attention to the album cover – provided by none other than Eliran Kantor (Testament, Hate Eternal, Sodom) – and you’ll see the connection is immediate.

“Devouring Faith” – which features an excellent video clip recorded by Cléber Cardoso –  is yet another full demonstration of all the musical ability of this group: pummeling and angry old-school death metal, highlighted by Moyses towering riffs. He has secured a place among the best 7-string extreme death metal guitarist, and he has thanked Fear Factory‘s Dino Cazares for his suggestions to play those guitars. “Slay The Prophet” presents itself disguised in a rhythmic approach with toned-down, rock-solid guitars, yet it soon evolves into a chaotic musical carnage. A track like this one brings up the question of how they would be able to play these musical structures in a live environment… It is a nightmare of notes for only 3 people tackle! 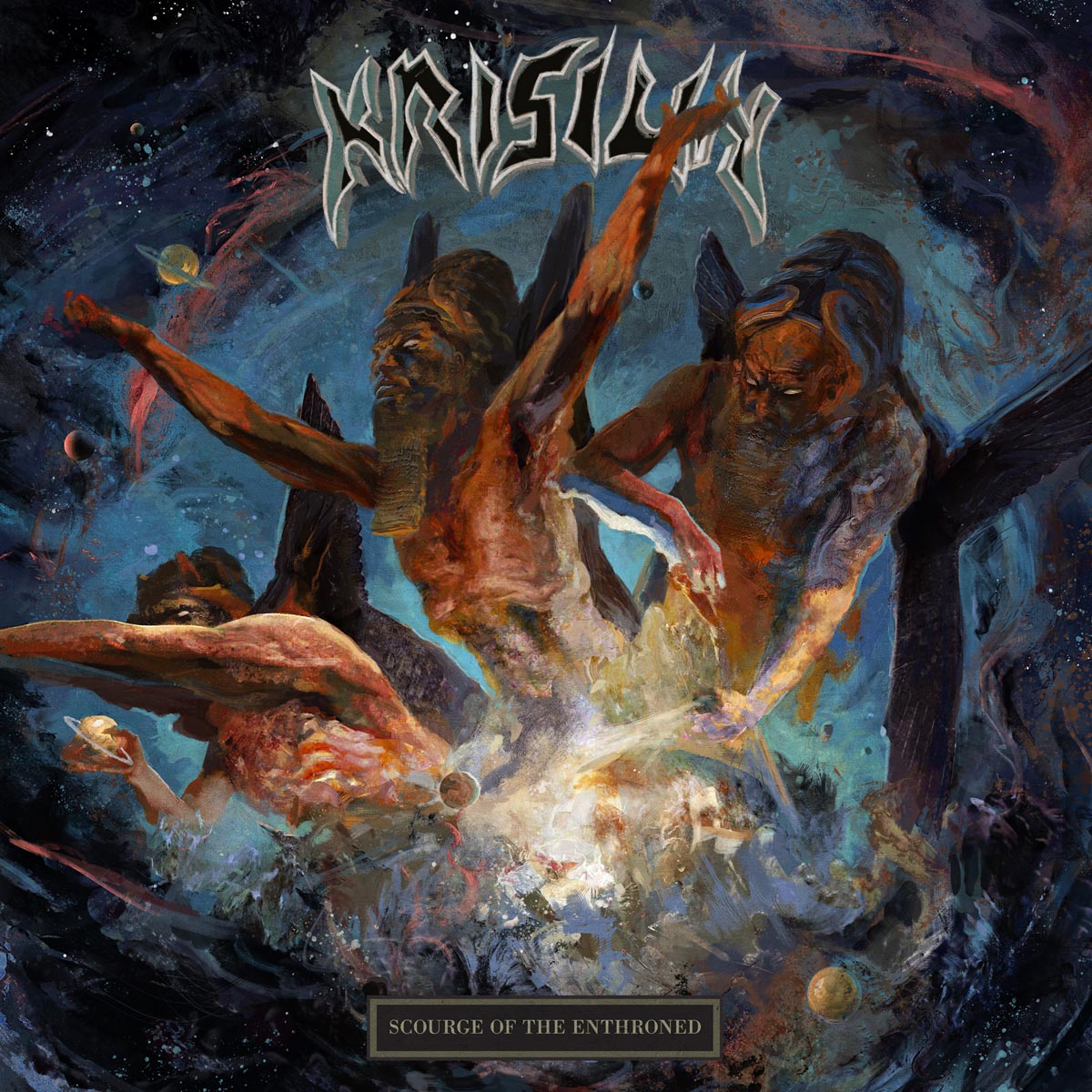 “Scourge of the Enthroned” Album Artwork

“A Thousand Graves” maintains the pace, sporting a perfectly mixed recipe of equal parts of cruelty, punishing passages, blast-beats and overall hostility. It’s hard to imagine that the lead singer Alex was once a drummer, his work on bass and vocals borders on perfection for this style. “Electricide” could easily be chosen to be the second video clip of this album: thrash-thundering and technically playful, it conveys a message equivalent to the threat of a earthshaking locomotive. The curtain-closers “Abysmal Misery (Foretold Destiny)” and “Whirlwind of Immortality” – yes, we already got to the last two tracks, the album is pretty short, clocking in only 38 minutes – serve as a whirlwind of anger-propelled rhythms, staccato runs, inhuman blasts and an unrelenting amount of crushing defiance, marinated with crafted melodies blasting through your speakers at maximum volume… it’s a Krisiun album, therefore they must close it in the fiercest way possible!

Scourge of the Enthroned was recorded in Germany in the first half of 2018, with production duties overlooked by Andy Classen (Tankard, Belphegor, Legion of the Damned), who had also worked on three previous albums with the band. The result is a record with a more organic feeling than Forged in Fury, very faithful to the band’s origins without excommunicating complexity and technique. Scourge of the Enthroned re-affirms Krisiun at the top of death-metal food chain, and now they have good reason to go on the road once again to showcase their art in the live setting, where they are praised as legendary (they hold the record of the most extensive international tour of all time for a Brazilian band, with over 120 shows in the year 2000). Fans of relentless-yet-technical death metal take note; this could be album of the year material for you!

”Scourge of the Enthroned” track-listing: