I’m not someone who has signed up for the vinyl resurgence. I’m happy enough with my CDs and downloads, but will often grab the super deluxe edition because I recall and still appreciate the combination of music and packaging.  Those were the days when buying an album was to enjoy the full experience of audio, visual and aesthetic, and as a prog-rock fan, often, the further revelations that those brought to the sounds within.

In this respect, John Holden’s “Capture Light” album comes very close to the old album experience.  The thoughtful combination of music together with artwork, and details of the tracks’ inspirations, allows you to immerse yourself in the musical experience. The care, attention and beauty you see in the packaging of this CD is fully reflected in the quality of the music in the interior. By his own admission, you probably won’t have heard of John but that shouldn’t be a barrier to connecting with this album (you can find out a lot more about how this music came about in my prior Sonic Perspectives interview with John). 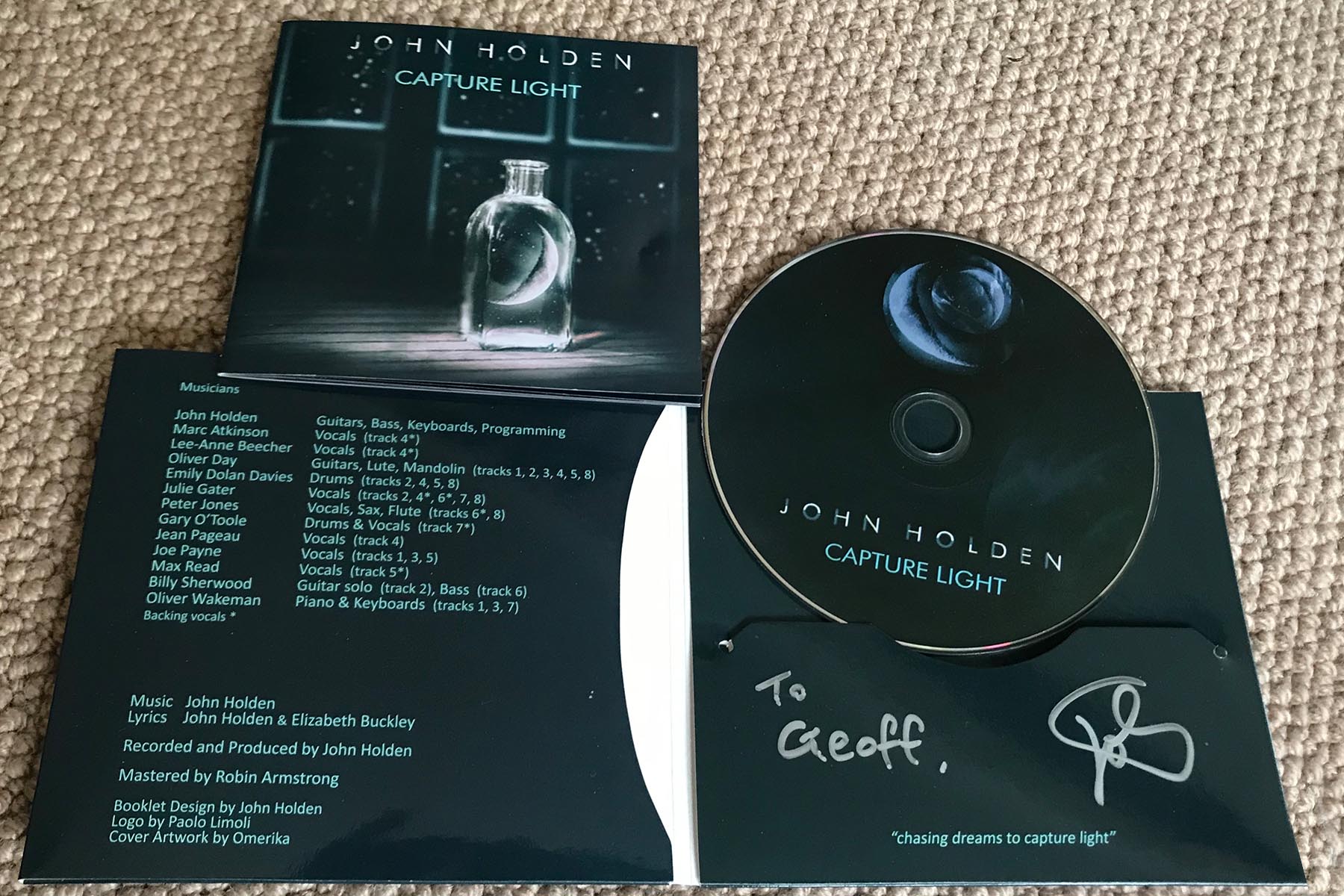 The album begins with “Tears from The Sun,” which starts with an atmospheric, almost film soundtrack sound. The piano riff and percussion build-up lead into a sudden change to church organ and the choir boy vocals of Joe Payne, formerly of The Enid. Payne sings throughout this album and demonstrates what a talent he is. The song is about the conquistadors, and the musical backdrop perfectly complements that. The track is a great preview of what’s to come–this album is full of striking melodies. The music manages to be economical—there is a lot of shredding but you get to experience, for example, the tasteful piano of former Yes man Oliver Wakeman on this track. “Tears” moves through a number of sections towards its finale. John’s production on is carefully crafted and sensitive. It’s clear that he wants to listener to catch his vision and not be distracted.

“Crimson Sky” which follows is more of a traditional song, perhaps in the style of a Mike Oldfield track with the folky vocals of Julie Gater.  Billy Sherwood adds some Howe-esque wah guitar, taking it into a nylon-stringed classical interlude before a great guitar solo brings the song to its finale. The standard of playing on this “homemade” album is just so high, and in its six minutes, “Crimson Sky” transports us through several shifting moods before returning to the chorus.

Title track “Capture Light” opens with a beautiful classic guitar section before Oliver’s piano takes the lead  with vocals by Payne. This is another historical piece, dealing with the artist Titian. While each song has a concept or back-story, this isn’t heavy prog-rock where you need to follow the liner notes to make any sense of what you’re hearing.  That allows you to keep your ears open for some very distinctive Moog runs from young Mr. Wakeman. “Ancient of Days” begins with Mystery singer Jean Pageau–this song has multiple vocalists and John chooses the best fit for each section. The tracks drops to a middle section with some Strat-sounding guitar leading to great drumming (I wouldn’t call it a drum solo, but it’s certainly a feature). The guitar of Oliver Day from Yes tribute band Fragile starts to converse with the vocalists. I feel this track is one of the album’s key highlights and has so much to enjoy–subsequent listening brings out even more of the depths and detail of the track (and on headphones you can hear how the sound-stage has been used to illustrate this).

The variety in the album is further demonstrated by “One Race,” another showcase for Joe Payne, who shows his ability to match and capture the musical style shifts, from bombastic to gentle. While not being heavy on narrative (the relevant details are all in the CD booklet), the title is a clever play on words about African-American Jesse Owens’ triumph at the 1936 Olympics in Nazi Germany. “Dreamcatcher,” the song that follows, combines instrumental work, including the bass of Sherwood and the flute of Peter Jones, with the spoken word, another variation within this eclectic album.

Musical variety continues in “No Man’s Land,” which is led by the drums of Steve Hackett’s stick-man, Gary O’Toole, who also duets with Julie Gater, with keys by Wakeman.  Gater’s vocal has that folky edge of Annie Haslam and is the perfect fit for this musical picture of city life.  The album ends with “Seaglass Hearts,” with chiming 12-string guitars and piano initially suggesting an early Genesis vibe. 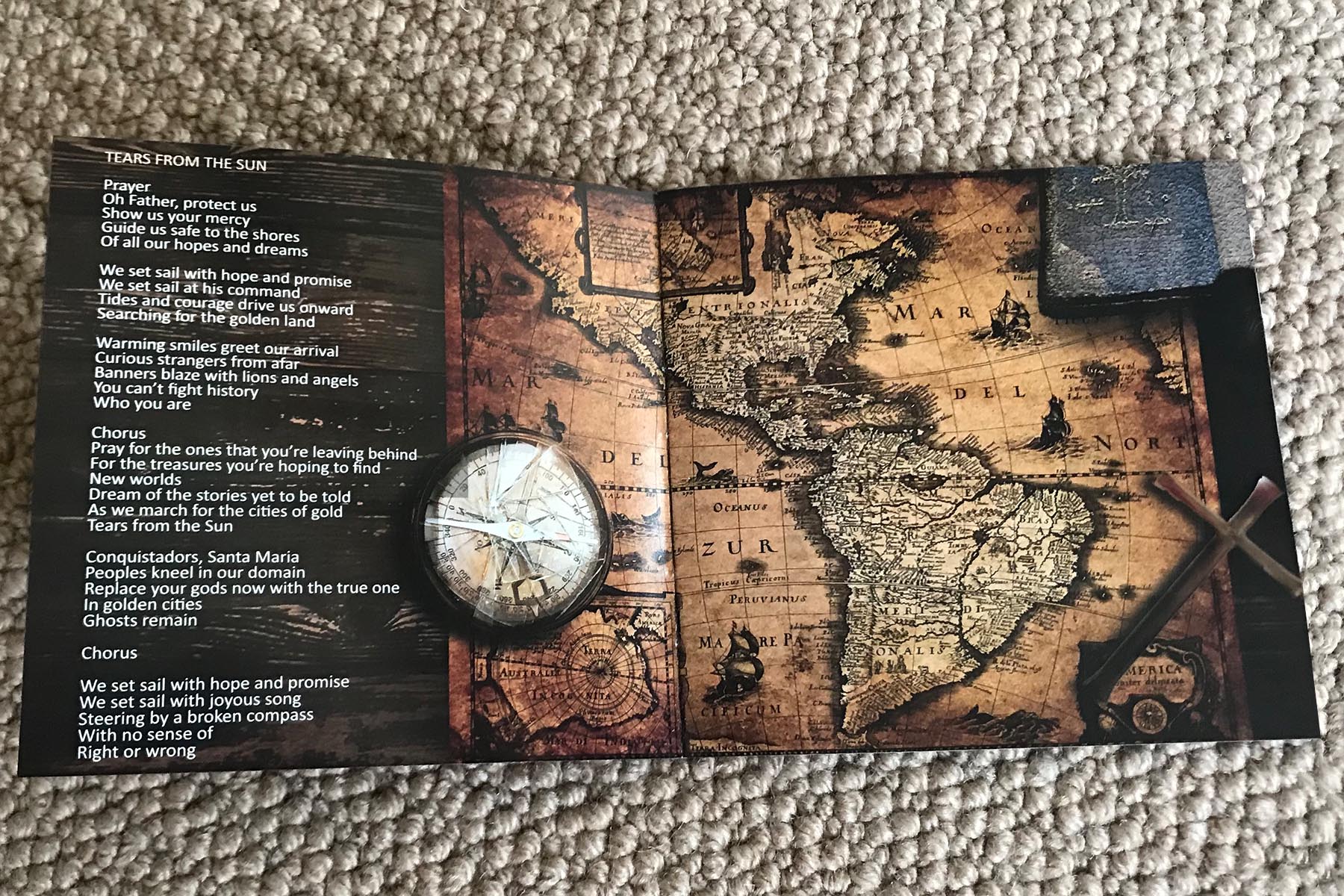 A look at the pages of the album booklet

This album is a labor of love showing great depths of variety, musical and production prowess, and a real ability at song writing/crafting. And by combining players and sounds, Capture Light creates a rich tapestry. John Holden first came to my attention via a Yes fan page, but it would be wrong to say this is music just for Yes fans. This is a very worthwhile purchase and one I’d highly recommend. It’s the full package, the kind I remember from the old days of buying albums.