More than 30 years have passed since JOE SATRIANI made rock history with his 1987 megahit Surfing with the Alien.  Joe hasn’t slowed down since, with a new release at least every three years. For two decades, the guitar virtuoso has traveled the world, playing to sold-out crowds as both a headliner and as founder of the all-star “G3” guitar extravaganza.  SATRIANI’s studio and live recordings have sold more than 10 million copies worldwide to date and of his many solo albums, two have gone platinum and four others went gold, with 15 Grammy nominations between them.  His side project, Chickenfoot, featuring former VAN HALEN frontman Sammy Hagar, former bassist Michael Anthony, and RED HOT CHILI PEPPERS’ drummer Chad Smith saw their debut album certified gold and their second studio album debuted at #9.

His 16th album What Happens Next releases January 12, 2018. While What Happens Next doesn’t knock you over with face-melting speed solos like his 1987 megahit Surfing with the Alien, it does deliver the solid, mature musicianship we’ve come to expect from his more recent releases. The new album features bassist Glenn Hughes (TRAPEZE / DEEP PURPLE / BLACK COUNTRY COMMUNION) and drummer Chad Smith (RED HOT CHILI PEPPERS), the latter reuniting with Satriani for the first time since their work in the supergroup Chickenfoot.

Joe begins the album with the rocker “Energy.”  While it doesn’t strike me as memorable out of the gate, it certainly lives up to its name and gets you energized for the tracks to come.  It’s followed up by “Catbot” an experimental cut where the distortion on both rhythm and lead is cranked up to robotic levels.  The main hook is uniform and abrupt, further articulating the mechanical movement on which the track is themed. 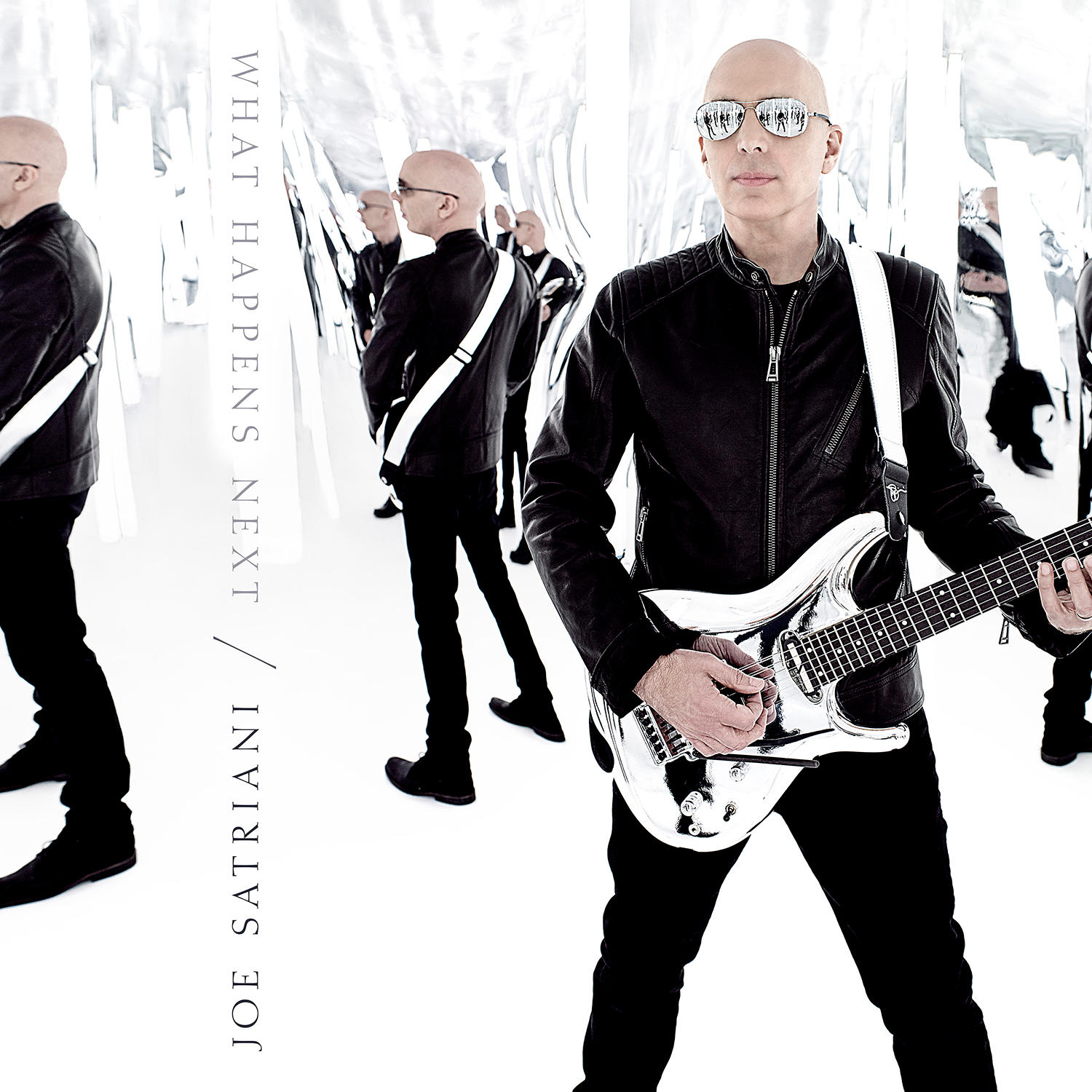 “What Happens Next” Album Cover

On track 3, “Thunder High on the Mountain,” Joe picks up some momentum.  The song opens with pounding drums and a rhythmic neck-tapping lead guitar.  I’m reminded of the intro to AC/DC’s “Thunderstuck” as the tapping builds anticipation toward a gigantic crunchy hook.  Perhaps Joe’s inclusion of the word “Thunder” in the title is admission to an AC/DC homage. This tune is so successful in getting me pumped up, I can’t help but feel it would have been a stronger opening to the album. The resemblance to “Thunderstruck” may also stem from the influence of producer/engineer/mixer Mike Fraser, Satriani’s frequent collaborator over the last 20 years who produced this album as well as AC/DC’s Razor’s Edge.

The beauty of Satriani’s instrumentation isn’t always in the solos.  Joe effortlessly expresses sentiment through how his guitar emotes.  This is on clear display in “Cherry Blossoms” as Joe delivers an emotional, heartfelt soliloquy through the portions that can only be described as the vocal melody, despite the complete lack of vocals. “Righteous” is arguably the best composed track of the album and strays far from the typical Satch formula.  It’s mellow, heartening, unpredictable, and never feels like it’s showing off.  I can’t get enough of it. Many of the song titles in What Happens Next could use a little more thought.  Many names – “Energy,” “Smooth Soul,” “Super Funky Badass” – sound more like working titles than official release titles.  They aren’t especially imaginative but at least describe what you are getting.

With “Headrush” we get a traditional Satriani boogie that is frenzied in all the right ways.  This is bassist Glenn Hughes‘ moment to shine.  He brings us a frantic climbing bass line and a couple short solos that remind you to take note of what’s happening behind Joe’s guitar work.

What Happens Next is ultimately an uplifting, feel-good collection with a handful of gems and enough hooks to have you whistling along on your first listen.  There’s not a bad song in the group, although some exhibit less direction than others.  Many songs are fully fleshed out while some are simply cool riffs with a solo on top, yet all of them sport the electrifying energy Joe is known for.  If you are a fan of Satriani’s recent albums, this one will be a worthy addition to your collection.

Just a day prior to the album release, SATRIANI revives his G3 tour entity, inviting DREAM THEATER’s John Petrucci and DEF LEPPARD lead guitarist, Phil Collen to join him.  The G3 Tour launches on January 11 in Seattle, WA and continues across the U.S. before winding up on February 25 in Milwaukee, WI.  There is a special tour pre-sale promotion giving fans the opportunity to buy concert tickets with the new album as well as VIP packages. Visit this location for more information about VIP packages, and concert tickets.