The young master has returned.

Greatness is born through tenacity, and few whom rose out of the European power metal scene of the late 90s can claim the level of steadfastness exhibited by neo-classical shred impresario Dushan Petrossi. Among such noted acts to come out of Europe bearing the standard of Yngwie Malmsteen such as Sweden’s Stormwind, Finland’s Virtuocity and Japan’s Ark Storm, his flagship project Magic Kingdom and its slightly more prolific and stylized twin Iron Mask have maintained the principles of the original movement consistently for just over 20 years. With the release of the former project’s colossal sophomore album “Metallic Tragedy,” some in the metal media hailed Dushan as the legitimate heir of the Malmsteen legacy, which might have puzzled some given the massive array of guitarists throughout Europe and beyond that were equally as flashy and a tad more orthodox in how they emulated Yngwie’s Baroque-infused soloing style. Then again, being a true disciple does not terminate on simply restating the master’s teachings, but in effectively and tastefully expanding upon them for a new audience.

In contrast to his more stylistically eclectic and somewhat unconventional principle project, Petrossi’s work under the Iron Mask name has been a bit closer to the power metal orthodoxy that dominated the scene during its ascendant period. From its 2002 inception and debut LP “Revenge Is My Name,” it has presented itself as a hybrid of the song-oriented era of Rising Force’s seminal period from 1985’s “Marching Out” up until the early 1990s, along with a helping of the heavier and more aggressive side that came out during Malmsteen’s mid-90s run via Seventh Sign and Magnum Opus, and a subtle dash of symphonic bombast that is comparable to the early works of Rhapsody Of Fire and At Vance. By this standard, this outfit’s 7th LP “Master Of Masters” presents itself as a fairly typical listen stylistically, but presented in a more polished fashion. Much of this owes to recently recruited Immanent Distance front man Mike Slembrouck, who has a smoother, more operatic approach to singing that is fairly close to that of Fabio Lione, and a tad less gritty than previous helmsman Diego Valdez’s Dio-inspired sound, though across the board this album tends a tad closer to a symphonic power metal affair.

Though definitely on the elaborate side of the equation, this album comes across as more streamlined and banger-oriented relative to the past several excursions into Neo-baroque, metallic fury. Flying forth from a dramatic mixture of choral voices and symphonic ambience, “Never Kiss The Ring” lays on the heroic power metal splendor like it’s going out of style, often mirroring the machine-gun drumming mixed with blinding riff work typical to recent Rhapsody Of Fire speeders, but with a more guitar-centric feel. Striking up a similarly fantastical note, the more mid-paced and folksy romp “Tree Of The World” also reminisces a fair bit upon the handiwork of the aforementioned Italian symphonic pioneers, while the massive 9 minute epic offering “Nothing Lasts Forever” manages to perfectly marry the shred-intensive stylings of Malmsteen’s “Trilogy Suite” with one of the longer offerings off of “Legendary Tales” or “Symphony Of Enchanted Lands.” All the while, Petrossi’s expansive songwriting never loses site of the need for a powerful hook to bring the whole thing together. 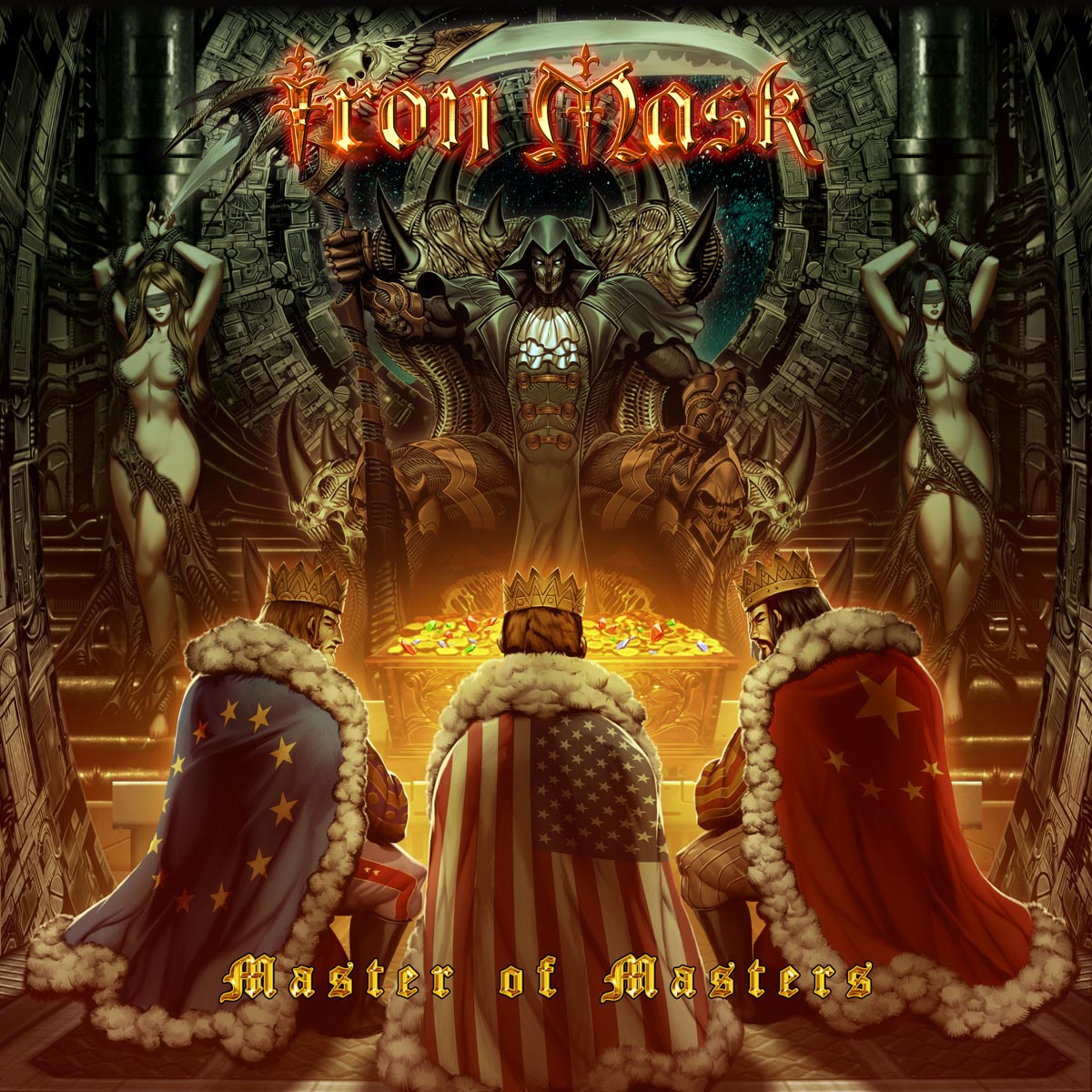 The bulk of what rounds out the rest of this towering opus tend towards the more conservative side of the power metal coin, still exhibiting the symphonic tendencies alluded to previously, but with a greater eye to Iron Mask’s older sound. Arguably the closest to a direct, old school Rising Force emulation is the rocking anthem “Revolution Rise”, which sees the talents of former At Vance front man Oliver Hartmann taking the vocal reins much as he did on select offerings on Magic Kingdom’s “Metallic Tragedy,” resulting in something that could have been on “Marching Out,” with Hartmann’s more gravely delivery being fairly reminiscent of Jeff Scott Soto’s. The slow grooving stomp of “One Against All” and the slightly more upbeat “My One And Only” also hearken back to the glory days of 80s Malmsteen, while the melodic contours and coasting flow of “Dance With The Beast” has a strong Stratovarius vibe to it. But the true moment of classic Malmsteen emulation occurs on the slow-paced, Celtic-infused beast of a song “Mist Of Loch Ness”, which could be viewed as Dushan’s long awaited answer to “I Am A Viking”.

As with any well constructed power metal opus, this one is the complete storybook package that includes a compelling conclusion. Following what can be best described as a separate introduction to the grand finale, the brief symphonic instrumental “Sagittarius” has a strongly cinematic character that is mildly similar to the highly popular Game Of Thrones theme, and provides the perfect segue into the mid-paced epic march of the title song and closer “Master Of Masters”. It serves to underscore this band’s firm rooting in metal antiquity by merging the band’s quasi-symphonic presentation here with the triumphant air of Black Sabbath’s pinnacle moment with Dio at the helm “Heaven And Hell”, arguably an approach that has built Sabaton’s ongoing popularity. It’s a fitting close to an album that will likely not be the close to this band’s brilliant career, and despite Dushan’s tendency of switching out vocalists at the same frequency as Yngwie, it will hopefully not be the last to feature Slembrouck at the fore. It’s a boon for old school heavy metal enthusiasts, shred addicts, and LARPing power metal elves alike, end of story.

Belgian power metal and shred extraordinaire Dushan Petrossi’s most prolific project returns for a seventh full length exploration of orthodox neo-classical metallic splendor with an updated sound and a new lineup, ushering the turn of the millennium power metal spirit into the 2020s with masterful results.