As the modern metal world continues to evolve, and fracture into all of its component sub-genres, an argument can reasonably made that much of metal can be carved into two broad categories; old-school and new-school. While the new school contains everything from power-metal to prog-metal to symphonic-metal, to all the “cores” and niche categories, the old school is fairly cut-and-dried. Diamond Head. Priest. Maiden. Motörhead. Anvil. Accept. NWOBHM. Plug some Duncan humbuckers into a dimed Marshall, put on some leather pants, and melt some faces. It’s a solid formula, really.

If heavy metal were a VFW hall with battle-hardened veterans of history, Herman Frank of Accept’s Balls to the Wall era would be a regular at the bar with some stories to tell. In fact, his new solo album offering, Fight the Fear, is a textbook example of metal from the old school. For those of us with more years behind us than ahead of us, there are often more member-berries to be had in metal from the golden age, than in the “new stuff” (thanks South Park for member-berries). We in music media often ponder the genres and directions of metal, and it must be a question for record labels whether there is a viable market in Old Metal Bastards as customers. If we are talking about Hank, age 52 in Hubbard Ohio who saw Iron Maiden six times on the World Slavery Tour, is he going to buy the new Michael Romeo or Nightwish, or is he happy to keep the same copy of Painkiller in his car’s head unit for weeks at a time?

Well, if Hank is feeling like the music recording industry is passing him by, worry not, Henry my friend. We all feel that way at times, and Herman Frank may be the balm you need. Fight the Fear is a polished-up gem from the old school, through and through. There are no fancy post-production effects. There are no symphonic bits. Hell, there are no keyboards at all. There are no hot Scandinavian guest vocalists. This is “balls to the wall” metal in all its non-toxic masculine glory. Although there is no UDO, there is Masterplan vocalist Rick Altzi bringing some serious grit and power. 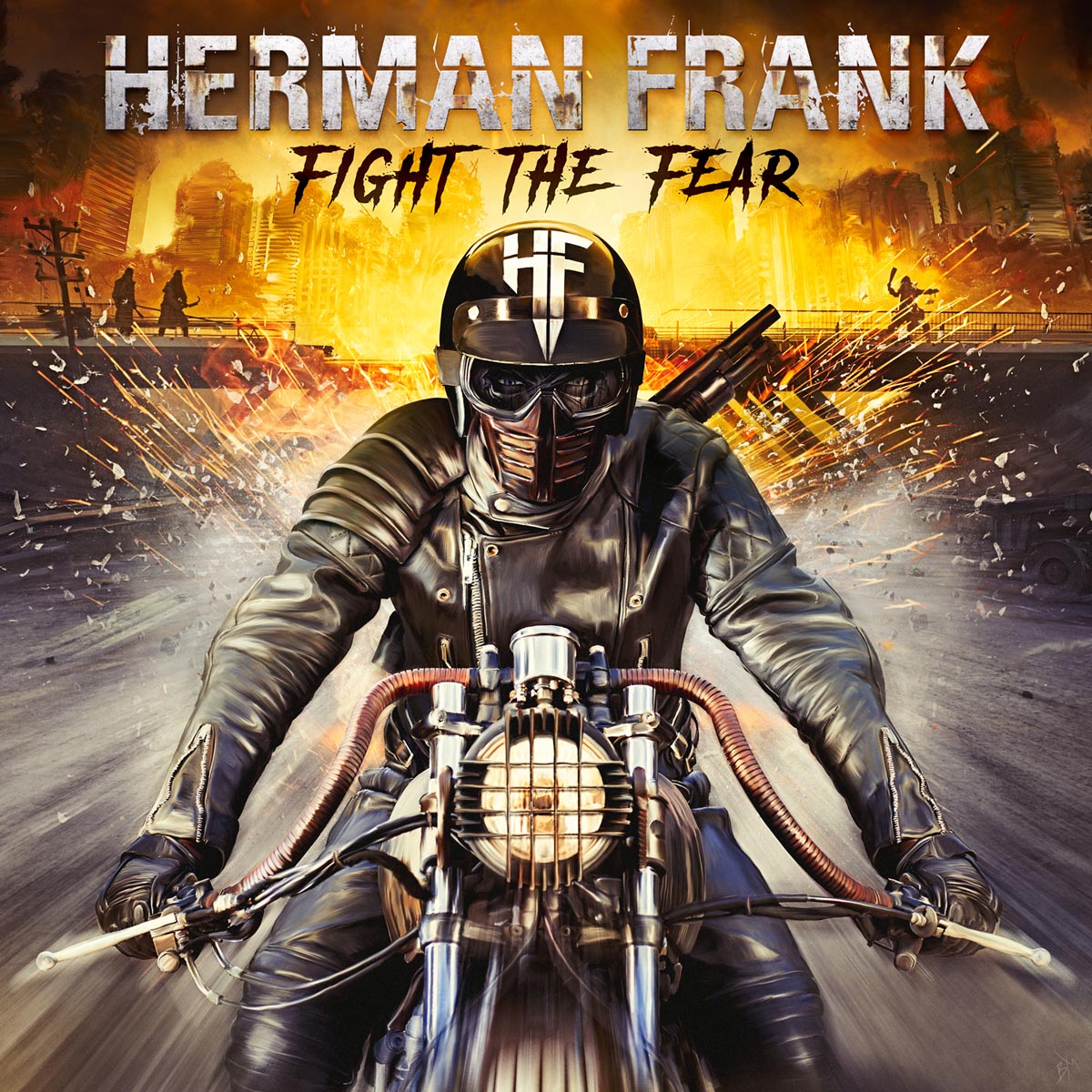 If you are looking for a concept album, or a big bag of fancy tricks, or complex compositions, this will not be your jam. However, if you are looking to let your inner Lemmy Kilmister run loose for a while with some no-nonsense straight-up metal, this might be just the ticket. The songs are powered by big riffs, chunky drums and bass, and impressive lead guitars. Hell, the album art features motorcycles, leather, shotguns, and explosions, and those are my four basic food groups. Composition-wise, the album is most like Lords of Black, Manimal, and maybe a bit of Back for the Attack era Dokken. Herman was perfectly happy letting Rick tackle most of the songwriting homework. Were I the lead guitarist at the helm of a solo project like this, I do not think I would be comfortable offloading the lyrics entirely to anyone else, but everyone is different, and that is what makes the music world go round. The lyrics are generally standard-issue metal fare about taking names, kicking ass, chewing gum, etc, although Rick Altzi indicates there are some elements of commentary on the undeniably jacked-up state of the world.

The album is well-mixed and well-presented in spite of its stripped-down nature. The album art heavily features a café or bobber style race bike, and it is altogether an appropriate metaphor for the music within: loud, naked, fast metal built to get you where you want to go. It may take a couple listens to get a feel for the clutch and friction zone of this particular metal machine, but it is well worth the ride. This beast hits the streets next 8th of February, and you should definitely check it out here.

While it may be tempting to write this album off as unoriginal, as it essentially follows 1980s conventions of Priest and Accept, it manages to do so in a clean, updated, melodic 21st century way, and is very listenable for it. If you dig Crüe, Sister Sin, Dio, Dokken, or just about anything that bangs your head with its old school Marshall Stack grit and powerful drumming, you owe it to yourself to check out what one of the original masters has been up to: Herman Frank. Check it out.