“One small step for man, and a giant leap for mankind.”  A culture of undead space-faring conquerors who steal the souls of their enemies. Dinosaurs. These are all topics that are fair game in the land of Helion Prime, a relatively new power metal band that takes its name from a planet in the second film of the Riddick series, “The Chronicles of Riddick.”  But where many power metal bands draw too heavily upon synths, high and operatic vocals, and topics that are, let’s face it, kind of silly, Helion Prime takes space-age subject matter that could be ridiculed and brings it, well, back down to Earth. Both musically and lyrically. Their eponymous debut album established that brand of relatability, and now the band is releasing the sophomore effort, the fantastically-named Terror of The Cybernetic Space Monster!

Led by the creative talents of founder and guitarist Jason Ashcraft, Helion Prime‘s debut album landed in 2016 like a ten-ton nuke from orbit on a genre which, quite frankly, could use the occasional kick in the space pants. (Space Pants!)  Originally released on a small independent label, the album made quite a name for itself around the internet, mainly because of its fresh and no-nonsense approach to power metal.  First off, while the band might have a symphonic intro to each album, the music itself is anything but symphonic.  It is less soft taco, and more crunchwrap supreme.  The band has always had a hard edge to it, with riffs more akin to The-Black-Halo-era Kamelot or even heavier bands like Lamb of God and Iced Earth than something like Rhapsody or Stratovarius.  That’s not to say the band’s arrangements are simplistic.  First off, there is a huge emphasis on vocals, with gigantic, bombastic choruses with lush layering of harmonized vocals, but just enough snarl and rock and roll swagger to bring non-traditional power metal enthusiasts into the fold.  The double-bass riffing is always an urgent and constant assault and never really falls into the realm of gallop.  And the production sounds fantastic, on both albums.

Without dwelling too much on the past, the band’s first album featured the surprisingly impressive vocal talents of Heather Michele, and her performance was almost too good to be true.  It was razor-sharp vocal accuracy to the point where it sounded otherworldly.  A good lead singer can make or break a power metal band; a bad one can instantly deliver an otherwise-promising band into the world of cheese, and a good one can elevate them to heights previously unheard of (we still miss you, Roy Khan).  And that was the case with Heather Michele.  Her performance on the album Helion Prime launched it into the stratosphere.  That’s why her disappointing exit from the band left many fans (this reviewer included) unsure of what the band would be able to produce afterwards.  And like Vin Diesel’s Riddick rescuing a dwindling band of space-travelers from a planet full of hostile and hungry carnivorous space-baddies, enter Sozos Michael to rescue an uncertain band of power metal adventurers from an uncertain fate.

This guy is really good.  First off, as has been said elsewhere on Sonic Perspectives, the idea of treating gender of lead vocalist as a genre of music is a myopic way to view music, at best.  And the fact that Helion Prime changed from a female lead vocalist to a male lead vocalist shows that songwriting, singing talent, and ability to deliver a compelling and believable performance is more important than anything when choosing a new singer for an existing band.  Helion Prime sounds as strong with Sozos Michael on the mic as ever.  He has an incredible range, singing high and clear without falsetto, and delivers all of the notes in a solid harmony that one could want, and sings it all with a blistering ferocity that supports the music exactly as it should.  At times, he sounds strikingly similar to Styx‘s Lawrence Gowan in his cleaner and gentler timbre, and other times you swear you’re about to hear a Bruce Dickinson air-raid siren come out of him.  And somehow, he always manages to take concepts that might require a bit too much suspension of disbelief at times, and keeps them firmly grounded, away from the worlds of cheese. 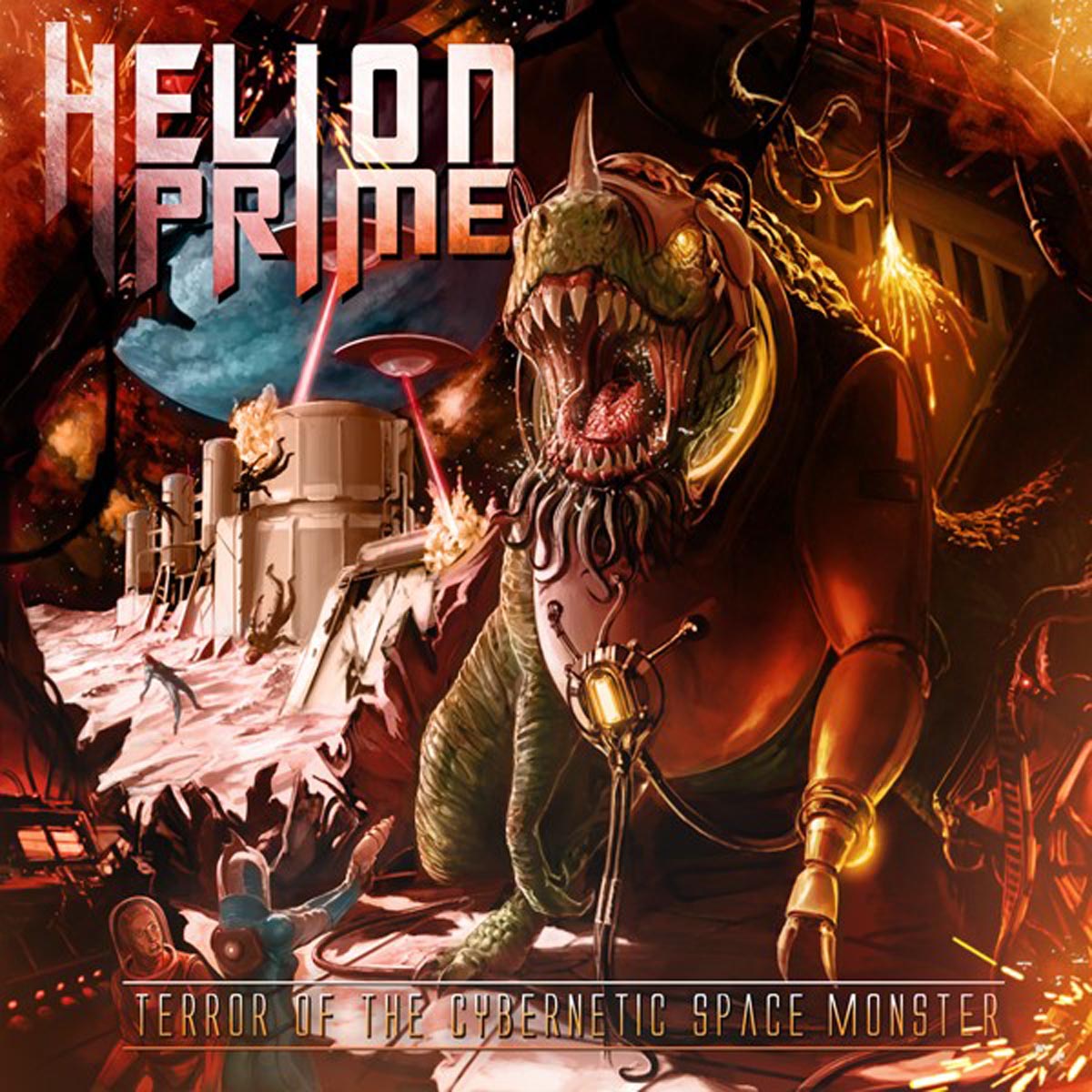 Aside from two vocalist changes since the first album, the rest of the band sounds strong.  The playing is clean and tidy, and the album sounds quite immense overall, offering plenty of headbangable moments, even if the guitar lines aren’t always immediately memorable or a few of the choruses aren’t immediately sing-along-able… eventually the album begins to work its earworm magic on you. High points of the album are “Atlas Obscura,” “Silent Skies,” and the gargantuan title track, the 17+ minute “Terror of the Cybernetic Space Monster.”  “Atlas Obscura” begins with a dual piano line full of microtones before launching us into a 5-minute chug-fest on the guitars and just slamming drums that would make Casey Grillo throw the horns, with searing and soaring choruses, before launching us into what’s arguably the most traditionally power metal sounding song on the album, “Urth.”  “Silent Skies” begins with somber twelve-string acoustic guitar and introspective vocals from Sozos Michael before again launching us into a crunch-filled chug fest that is catchy as hell, and filled with crashing cymbal work that will give you neck pains like you’re caught in a mosh in 1988.  That song sets us up perfectly for the aforementioned epic finale of the album, “Terror of the Cybernetic Space Monster,” which is undoubtedly the band’s most aspiring undertaking to date.

The entire song sounds like the ambitious little brother of an Ayreon album, with Sozos Michael being joined by guest vocalists with whom he trades vocals back and forth, creating a dialogue, and layering vocals with each other for the choruses.  The song moves through multiple movements seamlessly enough, not dragging out this entire work like a lesser band might.  It also doesn’t rely on an annoying amount of reprisals, like lazier songwriters might employ.  We’re treated to a most triumphant solo from lead guitarist Chad Anderson that also works as another clever transition.  And, also like Ayreon, it does a fantastic job of taking the subject matter that is presumably the band’s space-armor-clad cybernetic T. Rex mascot, Saibot, and making it feel like a real and believable work of dramatic fiction, rather than a song about, say, cosmic justice.  “Terror of the Cybernetic Space Monster” also includes the heaviest use of backing track synths, which are used for atmosphere rather than wacky over-the-top solos.  Once all of the instruments are back in, the programmed bits duck back out to let the rocking resume.  And we find ourselves knee-deep in a full chorus sung melody from all of the vocalists, in full ensemble fashion.  Admittedly, it’s not the greatest epic you’ll ever hear, but its ambition must be admired, and it’s an important signifier of what is to come from future output by Helion Prime.  The song ends with a ritardando resolve, but the listener might want a tiny bit more to finish out the album, such as a quiet solo acoustic guitar fading out, or something to say goodbye.

All in all, Helion Prime‘s second offering is a strong one.  Their ability to mesh science-fiction and science fact is admirable, and their use of Saibot on their album covers shows they are happy to not take themselves too seriously, which is refreshing for a somewhat jaded older metalhead.  The loss of such a great vocalist after their first album, and then another vocalist, could be enough to sink the space battleship of a less tenacious band, but Helion Prime has defied the odds of the music industry these days to persevere.  Terror of The Cybernetic Space Monster is a fun and impressive effort that will keep the foot stomping and the head banging, and give you enough pauses to breathe over the course of an hour or so.  It makes a solid pairing with the debut album, and will most likely make a great lead-in to its eventual successor.  The band is about to embark on a U.S. tour with Striker and Unleash The Archers (which is fitting, as UTA’s Brittney Slayes lends guest vocals to “Terror of the Cybernetic Space Monster”) and should be a very fun night for any power / prog / metal fan who lives even remotely close to a show.

High marks for originality for Helion Prime, as the band's concept is simply fun, but also full of intelligent and thought-provoking lyrics that should delight fans of both Michael Crichton and Neil deGrasse Tyson alike. Also for taking what can be a hackneyed genre and breathing some fresh air into it. The entire instrumental section of the band is quite solid, and the challenging addition of a new lead vocalist seems to not have been an insurmountable obstacle, and Sozos Michael clearly sings his heart out from start to finish. The album overall is quite formidable, but something just feels missing at times... maybe it doesn't take some of the chances that the first album did, or maybe the titular epic needed to just go off the deep end a bit more. That could just be the progressive leanings of this reviewer, however, and the album could be quite sufficient to please most listeners who like things a bit more safe. The album is produced quite nicely, and provides great crunch and crystal clear highs, that should please most audio aficionados.