Atlanta. Known to those of us fortunate to live there as “Atlanna.” Known for the Braves, the 1996 Summer Olympics, the Coke Museum, a great big perimeter, and no small numbers of things named “Peachtree.” Also known for major headliners like Sevendust and Mastodon. Could Atlanta’s scrappy underdogs of the underground Halcyon Way be next? Halcyon Way is poised to drop a front-loader of tasty modern metal with their new album Bloody But Unbowed. The band is fronted by the hard-hitting vocals of Steve Braun, and supported by a sonically maximized wall of sound consisting of Jon Bodan and Max Eve on guitars, Skyler Moore on bass, and Ernie Topran bringing the massive drums.

Let’s get something clear up front. This is a modern metal band, with an undoubtedly contemporary sound, but it is executed intelligently, with enough taste, technique, and reverence for the masters to have something for most anyone. At first scratch, one may be afraid this is frat-boy dude-metal in the universe of Godsmack, Disturbed, and (sadly) Adrenaline Mob, but not so fast. Although the band’s sound is definitely accessible to more casual metal-heads, it’s more like Megatron. There’s more than meets the eye, and it’s a chromed semi-auto, loaded for business.

The vocals may be one of the strongest elements of this otherwise well-rounded release. Braun mostly has two voices, which although that’s about seven less than Axl, they cover the bases. I would describe the primary voice as very similar to Jeff “the Motorhead” Martin from Racer X, which is great. The other voice is a growly thing that is best compared to Mikael Åkerfeldt from Opeth, and really, If you are going to do the growly thing, that is the way to do it. Instrumentally, the album is an interesting animal, because it cannot just be pigeonholed as one single thing. While it is definitely a full-speed-ahead modern metal record where the band does not take the foot off the gas, it incorporates melodic elements and fairly hooky bits to keep it all interesting and not just an hour of monotonous mosh material. For example, the song “Church of Me”, if one can quit having déjà vu of Symphony X‘s“The Church of the Machine,” has some very cool interplay between the singer and a guest female vocalist. Other songs have nice instrumental and vocal chorus harmonies. Almost every song has some respectably shreddariffic guitar solo work, for those of us who are suckers for songs which showcase good solos.

It is worth noting that where many of today’s metal acts are settling for simple and somewhat unimaginative lyrics, Halcyon Way are constructing songs with meaning, rather than noise for its own sake. Just offhand, the song “Slaves to Silicon” poses the paradigm of today’s generation seeking meaning in a world of computerized devices and shallow social interaction. 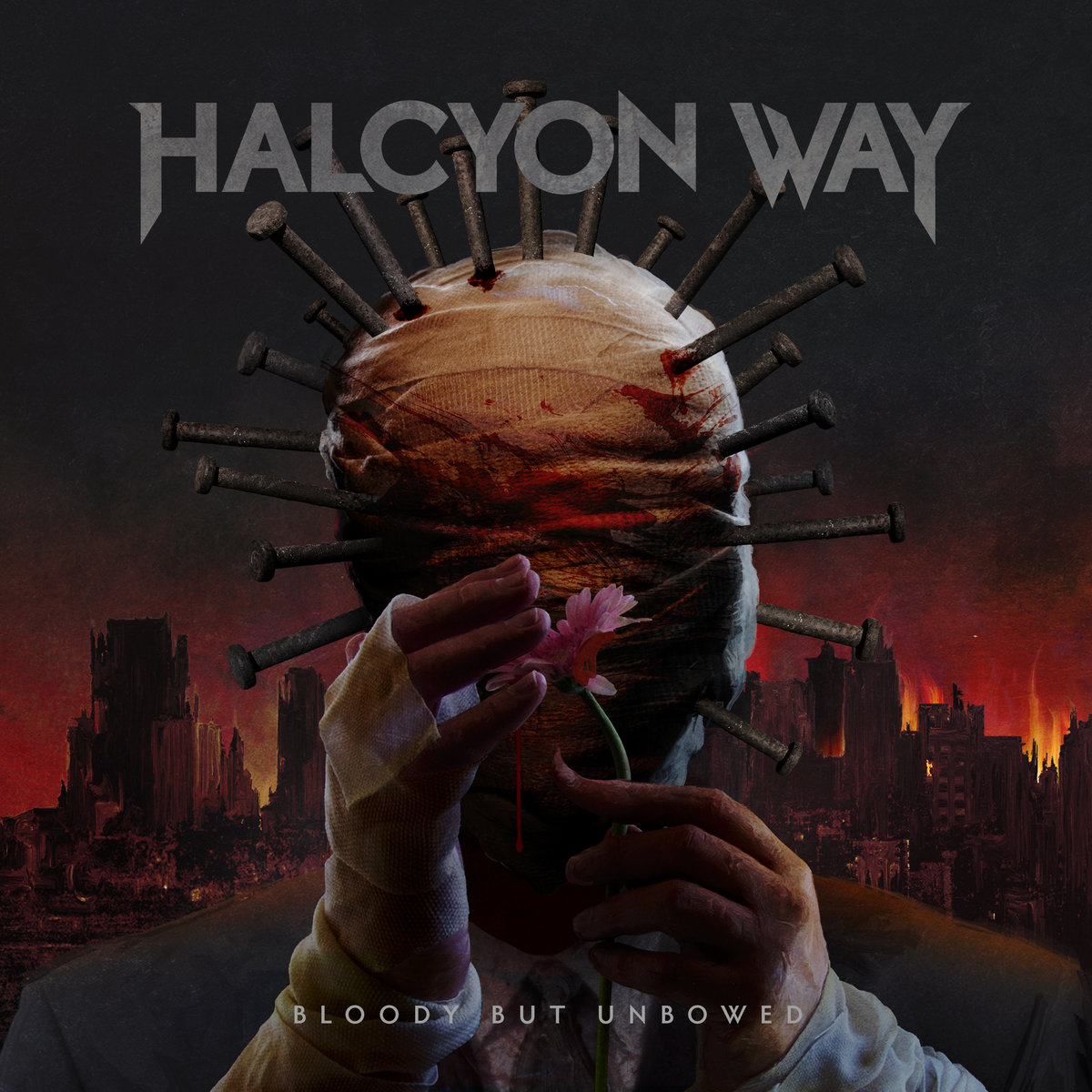 From a production standpoint, the albums production tries to be clever-bordering-on-cute with enhancements, but don’t worry, it’s not a dumpster fire like Dragonforce. It’s all in good taste. Strictly from a mixing standpoint, it is hard to imagine how it could have been better. The bass is big and boomy without being stupid, the drums are tight, with all pieces of the kit being nicely balanced. The rhythm tracks snarl and crunch with that all-important mid-range that is so often neglected. When the lead guitar steps forward to do some cool Romeo-style fills, or a full-blown solo, it is never lost in the mix, and yet remains mostly undrowned by post effects. For a non-A-list band, the album’s production is something they should be very proud of.

Without passing any kind of judgment on Halcyon Way’s previous releases, this album may be the one that puts them on the map in a big way. Nothing is certain in this new world of vapid and disposable music, but if there is any justice to be squeezed from the music business lemon, Halcyon Way are an act to watch. Bloody But Unbowed is hitting the streets right now, and can be picked up here.

We will not ask if you like bands like Queensrÿche and Judas Priest, because if you didn’t, it would mean you are dead or some form of crustacean from the ocean depths, and you would not be reading this in either case. However, if you enjoy Adrenaline Mob, Opeth, Ashes of Ares, Testament, Megadeth, or just about anything that crushes in a meaningful way, it is worth your while to give Halcyon Way a serious listen.