We’re now getting used to more creative forms of captivating the ever-dwindling metal audience: meets and greets, themed cruises, holograms, crowdfunding etc., anything is valid in order to stand out. And here’s another practice that may become a trend in the near future: a tribute band that doesn’t play covers, but instead pays homage to an act by writing new material. We’ve seen Last in Line use Dio’s solo material as a blueprint for their Heavy Crown album, and more or less simultaneously, Gruesome came to fruition by paying respect to extreme metal pioneers Death.

Gruesome was born out of guitarist/vocalist Matt Harvey and drummer Gus Rios’ mutual involvement with the Death To All tours. Following their debut Savage Land, which took Death’s Leprosy album as a starting point, they released two EPs (Dimensions of Horror and Fragments of Psyche), and are now back with a new effort, entitled Twisted Prayers.

On Twisted Prayers, the band took cues from Death’s Spiritual Healing. Unsurprisingly, the complexity in the arrangements and lyrics take an upward turn this time. Gone are the gory themes, and in come the social commentary, and subjects like violence, drugs, war etc. come to surface. Even the cover art seems to evoke Death’s intent on Spiritual Healing, presenting a priest in a church full of “walking dead” devotees. Not surprisingly, it was drawn by Ed Repka, the man behind most of Death’s covers and also Megadeth’s Peace Sells…But Who’s Buying and Rust in Peace.

Matt has been quite vocal about how the new album worked more as a collaborative effort than before, and that is palpable on first track “Inhumane”, which addresses excessive punishment and from the get go presents face-melting riffs and guitar harmonies that would make Chuck proud. The nihilistic video for that song work as a perfect visual accompaniment to the purposefully raw production. Follower “A Waste of Life” travels the same route, with a lyrical content alluding to a common theme in metal: TV evangelists and their false promises, particularly Benny Hinn and his “magic coat”. 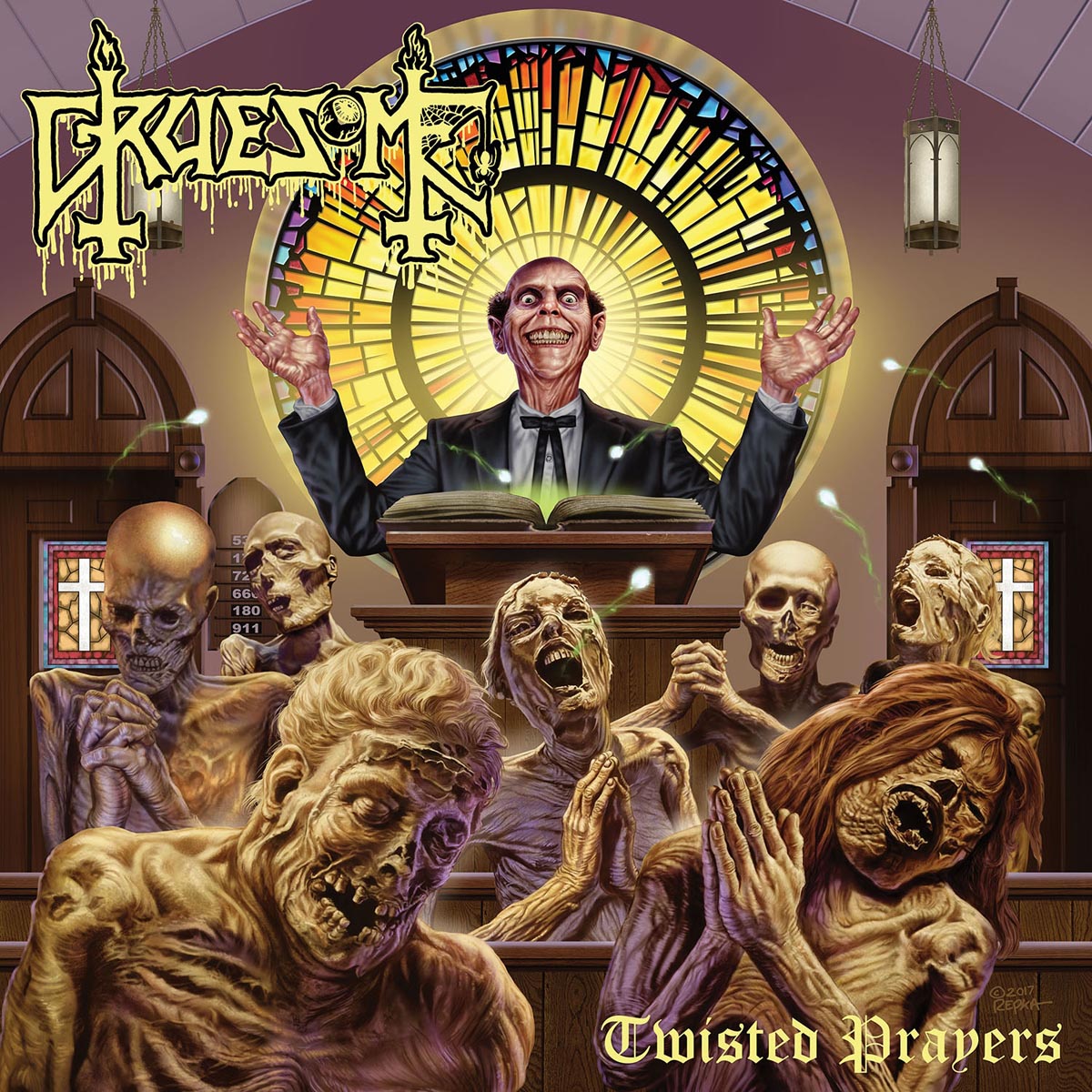 “Fatal Illusions” is another song that deservingly received a video treatment, and stands out as one of the best moments of this release. Vertiginous riffs abound, and Matt’s voice emulates Chuck’s without sounding like a copycat. Curiously, the subject matter here was an issue in Death’s heyday as much as it is now: gun violence and mass shootings. “Crusade of Brutality” and “At Death’s Door” keep up the pace and count with spine-tingling solos by James Murphy (Obituary, Testament), who also played on Spiritual Healing. The two covers included at the end of the album are also undeniable linked to Chuck: “Legion of Doom” was originally recorded by Mantas, which was Death’s first name, and “Exorcist” is of course a classic from Possessed, one of Chuck’s main influences. As far as homages go, it doesn’t get more authentic than that.

With so many mentions of the name Death in this review, one might begin to ask where to draw the line between a homage that comes from the heart and a mere attempt to cash in on Chuck’s legacy. At least to my ears, Gruesome honors their influences with respect and reverence, even if sometimes without the same groove and dynamic that made Death such a prominent force in the metal scene. I guess we’ll find out more about their mission statement once they exhaust Death’s catalogue. Will they carry on, find their own stride and come up with original material, or will they decide to forever reference their raison d’être?

While we keep them under the radar to discover their next steps, I should mention what a joy it was to figure out the references to Spiritual Healing – for instance, “Within The Mind” was the inspiration for “A Waste of Life”, if only in the initial riff, and “Living Monstrosity” was the origin of “Fatal Illusions”. Other references may be harder to grasp, depending on how ingrained the original album is in your brain. Also noteworthy is the songwriting: it feels more of an advanced expansion upon the territory that Schuldiner first stumbled upon in 1990 and would continue to expand upon for the duration of the decade, including nuances to posterior albums like Human and Symbolic. Metal fans who followed Death when they were starting off will enjoy this trip down memory lane, and remember a time that in reflection seemed simpler for us forty-year old headbangers, but which had similarly complicated issues as the lyrics in both Spiritual Healing and Twisted Prayers address. Twisted Prayers is an absolutely top notch filthy slab of old school death metal, played by the some of the scene’s most legit players, one I personally highly recommend.

With uncanny attention to detail, Gruesome pay their respects to the forefathers of technical death metal and regale the fans with several nuggets from Death’s Spiritual Healing to be found. An album that will hopefully convince younger metalheads to check out the original source of this material, whilst still enjoying the new release. Like an episode of The Twilight Zone, It will leave you wondering “what could have been” if Chuck Schuldiner was still with us