Graham Bonnet is seventy years old. This bears repetition. At the time of this publication, Graham Bonnet is seventy years old. This is important because in cases of artists in their golden years, it is invariably the elephant in the room. Most concerns come down to whether a given artist still has “it” after all these years. This review explores that very question; but make no mistake: at an age when most men are starting to have serious difficulties in locating car keys, Graham Bonnet is producing an original metal record. Let’s at least take a moment to respect that. It is a metal feat of Christopher Lee proportions.

As a former front-man of Rainbow and Alcatrazz, Graham certainly has earned his pedigree, and made his mark in the classic rock and metal scene. However, consider some of his contemporaries: men from Roth to Coverdale to Dokken simply do not have the command of their pipes that they once did. In continuing to write and record material as the Graham Bonnet Band, he attempts to prove that he can still write, and he still has the big wide-ranging pipes he was known for in the eighties.

Aside from the eponymous front-man of the project, the band is made up of Beth-Ami Heavenstone on bass, Jimmy Waldo on keyboards, and Mark Benquechea on the drums. Additionally, while Kurt James is formally the band’s guitarist, heavyweight Shrapnel Shredder Joey Tafolla actually plays on virtually the entire album, and this is a huge part of the record’s value.

In fact, unusually for a vocalist solo project (and yet perhaps in keeping with Eat ‘em and Smile), the instrumentation is the strongest part of the entire package. The compositions are straight-ahead rockers with old-school flavor, usually falling somewhere between Rainbow and Whitesnake, with some seasoning reminiscent of Voodoo Circle. The keyboard parts occasionally hearken to Don Airey, whereas the guitar parts have eighties Ozzy written all over them, with occasional bits of everything from Yngwie to Oliva, and of course tasty chunks of Shrapnel Shred a la Gilbert make appearances – and are most welcome. Instrumentally, in terms of composition, tempo, groove, and medium complexity, the album is a good straight up rocker for a summer drive.

Lyrically, it is nothing that special. One thing that made Bonnet’s “Down to Earth” album with Rainbow such a milestone was that it took an intrinsically Blackmore-driven project about wizards and dragons and brought it “down to earth” with more relatable lyrics, and more potential for commercial success with radio hits like “Since You’ve Been Gone.” Perhaps it is the “Garage” part of the band’s title; conceivably the band is going for something rudimentary and organic. However, the banality of the lyrics can be hard to ignore for many classic metal-heads. The opening titular track is actually about a garage band, while it is trying to maintain a beat and groove that feels like Rainbow had a baby with Primal Fear. The very next song seems to be about getting lost and looking for a hotel. The remaining songs are about incest, houses, men standing on corners, and ordering a long island iced tea in a minority bar where Graham is ostensibly not welcome. Granted, this is raw metal from the old school, not a deeply progressive concept album. Not every album requires Neal Peart penning lyrics about the objectivist perspectives of Ayn Rand and individualism. However, the lyrics of this album seem to slant more towards “Smell the Glove,” the original black album, except it is unclear if it is also parody. 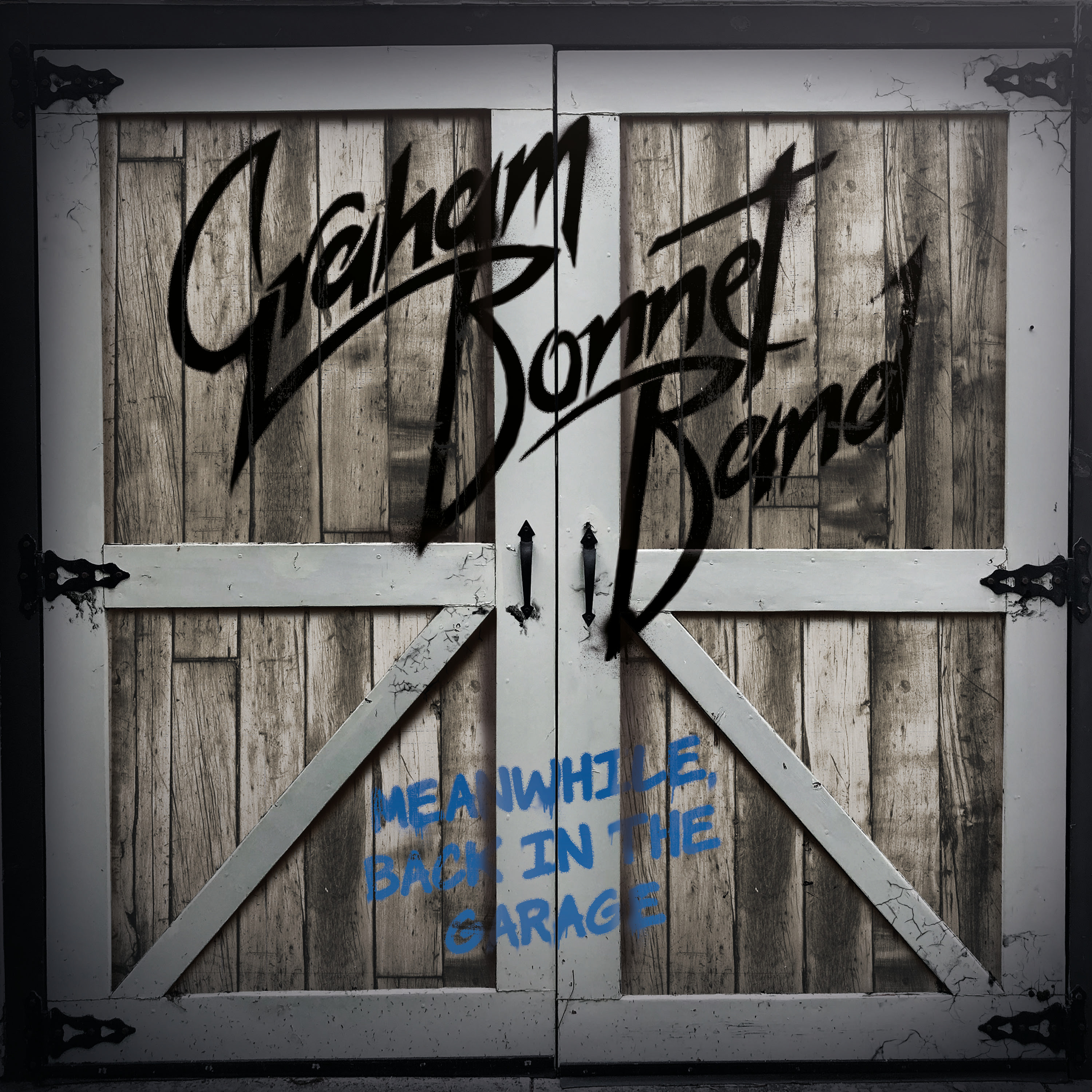 “Meanwhile, Back In The Garage” Album Artwork

Inevitably we must circle around and spend some time with the aforementioned room-dwelling elephant. Graham’s lyrics are better than expected. While he does not seem to have the range of thirty to forty years ago, it is surprising how much he can still do. From all available audible evidence, if Graham was asked to perform one of his hallmark albums live in its entirety, it would be a fairly close facsimile to the original article. However, there are times where it is obvious he is pushing his vocal chords and it is not sounding as good as it did when he would do so back in 1980. In fact, there are several extended areas of the new album where he moves his oratory focal point down into the back of his jaw, into his throat, and it just does not sound good. For example, Dennis De Young used to employ this on occasion, especially in later Styx albums. One such song was “High Time” from Kilroy. Check out the ”yeah yeah yeah” at 2:15. Like a great many things in music, an odd twist used at the right time in moderation can be fun for sake of variety. However, Bonnet seems to employ it for uncomfortably long periods of this new album. For example, the last minute and a half of the opening title song is mostly made up of this sort of singing. It can range from Frank Oz invoking his inner Miss Piggy, all the way to Terry Bozzio arguing the possession of “Titties and Beer” with Frank Zappa. As a whole, the singing is solid Graham, but the collector should be forewarned that he engages in this vocal weirdness at times, for better or for worse.

That being said, there are some songs that make this album worth having for anyone with a collection of side projects surrounding that whole Purple-Sabbath-Rainbow-Whitesnake family of musicians. Clearly, “Livin in Suspicion” is the single material of the album, full of hooks that get stuck in the ear. “Heading Toward the Light” is a very interesting song with funky syncopation with some of the same fun hooks and melodies. Finally, it would be impossible not to point out Graham Bonnet asking Tina Turner, “Who Runs Bartertown?” and covering her hit single “We Don’t Need Another Hero.” Spoiler alert, Tina Turner remains the Master Blaster of that particular Bartertown, but points to Graham for a fun and sincere tribute to the original.

This dirty, scrappy old-school street-fighter of a classic metal album will get real on July 13. While “Garage” might not be required listening for all metal-heads, it is a fun album and might be something fresh for fans of Graham and other acts of the genre. Go and check it out, you won’t regret it if you did.

“Meanwhile, Back in The Garage” Track-Listing:

If you like Rainbow, Dio, Deep Purple, or Alcatrazz, you may want to seriously consider picking this one up. Unlike other new releases from artists of similar vintage, it does not feel like a dry zombie husk that should probably just hang it up and go away. Hopefully this is not Graham Bonnet’s swan song, but if it is, there are certainly worse albums with which to leave the music world.