Thrash metal has never been big on the concept of subtlety, and if Gama Bomb’s latest studio offering is anything, it’s a full blown kick to the head that announces the exact instant that its boot will connect with one’s skull. Speed Between The Lines carries its active ingredient right in the very title, offering a laundry list of typical song subjects in either a serious or overtly tongue-in-cheek fashion at break neck speed and going all in on impact-based riffing and over-the-top vocalizations. Some might rightly nickname microphone maestro Philly Byrne as 1988 Blitz Ellsworth’s long lost, Northern Irish twin brother, which is about as much of a mouthful as the rapid fire lyrical delivery and banshee shouts that paint over the ultra-concise riff monsters that round out the entirety of this opus.

Whether one wishes to dub this pizza thrash or a crossover friendly brand of thrash that could be likened to Municipal Waste with more guitar solos or Vio-Lence with a side order of D.R.I., the songwriting on here is an exercise in getting down to business and suspending with the drawn out instrumental passages or elaborate intros. No song on here breaks the four minute mark, and only two individual songs get remotely close, as an album such as this places the prime focus on full speed mayhem, yet also keeps in mind that the audience that will be slaughtering each other in the pit at live outings will be comprised primarily of mortal human beings. There are occasional moments where the ancillary role of the bassist gives way to a few moments in the sun, but overall it’s the riff work, crazed drumming and vocals that steal the show.

The overall character of everything is fairly streamlined, often consisting of simple structural patterns, short solo bursts reminiscent of Slayer but with more of a mainline character along the lines of Skolnick or Gustafson, and a uniform driving feel. Maddened thrashers like “R.I.P. U”, “Stay Rotten” and “World Gone To Hell” rest on the shorter end of the spectrum, leaning close to the Municipal Waste formula and getting right to the point in a mere two or three minutes, yet somehow manages to make some highly impressive technical references to Annihilator and Dark Angel during the few scant seconds when Byrne is catching his breath. Others such as “Kurt Russell” and “Alt-Reich” get a little bit fancier during their respective intros, throwing in a short pop/punk reference in the former while the latter hits the precision stops and starts with the best of them. 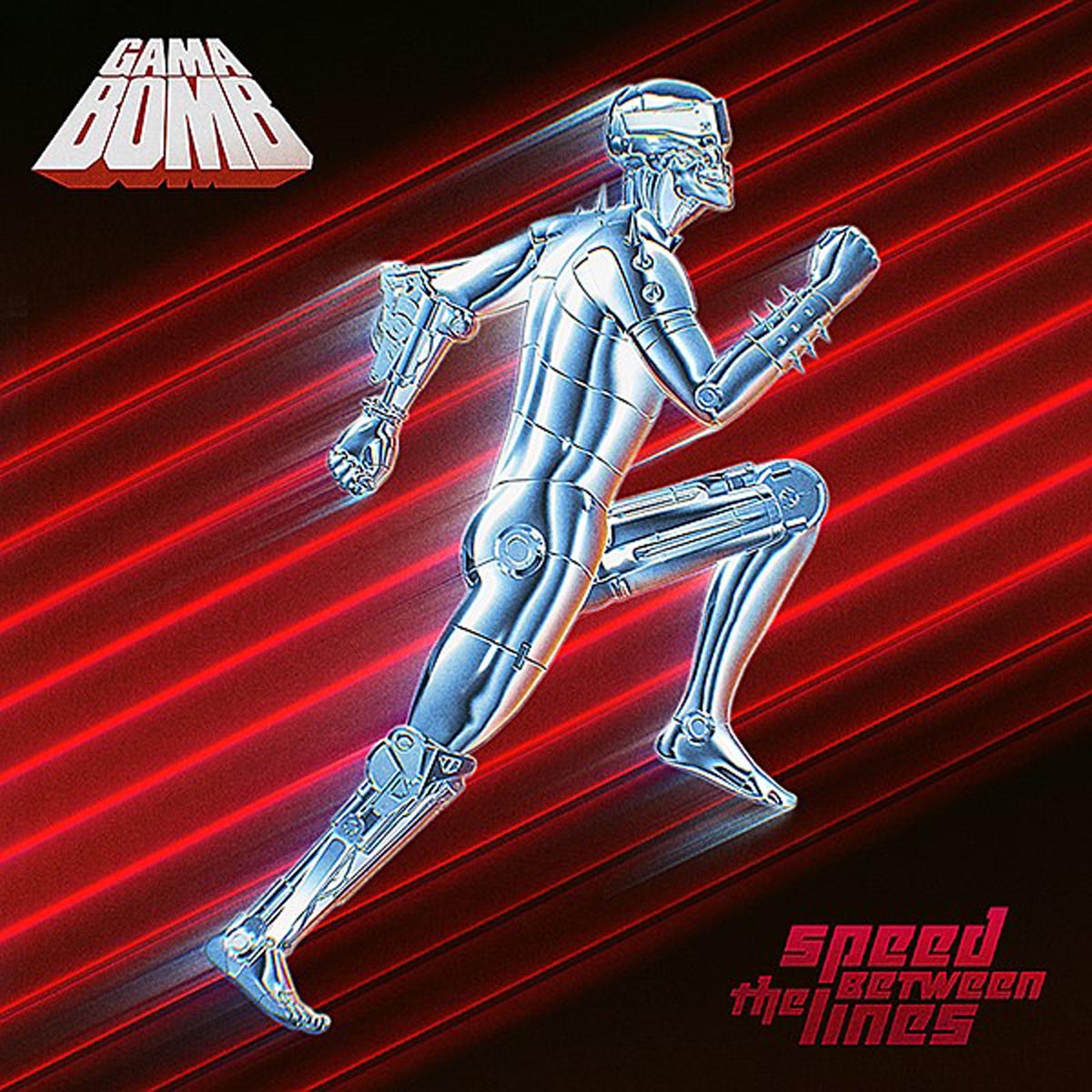 “Speed Between The Lines”Album Artwork

Ultimately this band proves to be at their best when they stick a little closer to a full-on thrash metal formula and stretch things out a little bit longer. The comical anthem to all things metal and S&M “Give Me Leather” cuts up the unfettered fury with a few more mid-paced segments that give the listener a bit more to chew on both structurally and melodically. Alongside the similarly comical and drawn out fun of “Bring Out The Monster”, this side of Gama Bomb represents their serious side, at least from a musical standpoint. However, while the fancy fill work of the rhythm section and the fun-loving shred solos are at their best on these songs, the ultimate show stealer is Byrne’s vocal work, displaying an ability to shatter glass, power up the middle range and have an extended conversation with himself about whatever random subject pops into his head.

Like a fine wine with a decrepit aftertaste, Gama Bomb just seems to be getting better with age, and this action packed collection of songs dedicated to some knockoff of The Running Man is among the best stuff they’ve ever put out. It’s tailor-made for any junkie of the genre who craves both the simplistic crossover character of Municipal Waste and Lich King, but also works equally well for the old guard who particularly enjoyed the punk-infused New York sound of albums like Nuclear Assault’s Game Over and Overkill’s Under The Influence. There’s been a fair bit of talk over the past six or seven years that the 80s thrash metal revival is dead and on its way to the funeral parlor, but evidently these mad Irishmen didn’t get the memo and would probably take turns lighting farts over top of it if they ever did.

“Speed Between The Lines” Track-Listing:

Arnold may be dodging lasers on this installment of The Running Man, but the campy thrashing, concise songwriting and unapologetic devotion to late 80s Overkill knows when to laugh it up and when to get serious