Penning your newest album as ‘self-titled’ over 30 years into your musical career is undoubtedly interpreted as a statement, one that is arguably unavoidable in the hands of nearly any long time artist. Such “obligatory” proclamation of self was exactly what Arizona thrash-metal veterans Flotsam and Jetsam did back in 2016. That record – which I personally reviewed here – was a successful rebirth of the band’s classic sound for listeners of the modern age, an all killer no filler collection of tracks rooted in the best sauce of the band’s hailed beginnings, showing a rejuvenated energy and top-notch musicianship. Many proclaimed it as Flotz greatest opus since “No Place for Disgrace” hit the shelves in the spring of 1998…

A little over two years have passed, and along the way, the band faced another in a long list of line-up changes: world-renowned drummer Jason Bittner left the ranks to join the New Jersey thrashers Overkill. Let’s face it: throughout their entire career fate hasn’t been on the side of the Phoenix based five-piece. Their record sales haven’t reached the kind of numbers their thrilling output justly deserves, and they have been classified as an anomaly in the annals of heavy metal history, one that sits on the underrated side of it. Nevertheless, I’m not going to write about past glories now, neither how they achieved the first (and only) 6K rating in Kerrang!’s history, nor why after their landmark debut Jason Newsted left them to jump onto the Metallica freight-train. If you know your metal, you’ve heard all those stories already, and the ghost of the past are better left alone. I came to talk about present and future, and the subject in question is the coming of their new record The End of Chaos – the second under their contract with AFM Records – hitting the streets this January 18th.

Keeping the momentum going is an undaunting task, but battling in the furrows is actually what these guys have done for the last three decades. To address the vacant drummer seat, the rest of the band – original members Erik A Kutson (vocals) and Mike Gilbert (guitars), along with Michael Spencer (bass) and Steve Conley (guitars) – tapped Ken Mary for their 2018 North American tour with Hammerfall, and later down the road welcomed him as the band’s permanent stickman. For those uninitiated, Mary has worked as a drummer, producer, engineer, singer, record executive and writer on over thirty-five albums that combined have sold over five million copies worldwide, and he’s best known for his work with notable acts such as Accept, Fifth Angel, Chastain, TKO, Impellitteri, House of Lords, Bonfire and Alice Cooper… how’s that for a resume?

Enough with the story and the introductions, man! Just tell us, how good The End of Chaos is? Well son, if you want the shortest possible answer… just go ahead and pre-order it. Don’t blink or hesitate. Is THAT good. But let’s elaborate further for those who love to read.

The opening salvo “Prisoner of Time” blasts out of the gate with a menacing yet melodic and absolutely furious rhythm section for the first 40 seconds, to segue into a brief bass interlude just before A.K. gets to the mic and unleashes the first verses. The chorus “Live your life without regret, don’t be a prisoner of time” is pure Flotz gold in unadulterated form, the guitars hollowing out your ears combining melodies and riffs, and the rhythm section… well those boys deserve some words. First, we have bassist Michael Spencer insanely frenetic, dense and hammering bass lines. This five strings motherfucker is a major groover, with a bass sound as good as your grandma roasted beef with potatoes. Secondly, we have the new kid in town, Mr. Ken Mary. I will refer to his drumming here just once, as an intelligent way to avoid repeating myself song after song: it fucking slays. His drumming inoculates a gut-wrenching layer that simply moves the fierceness and intensity knob to 15: merciless and accurate drum-beats, complex patterns in the speedy parts, and a masterclass use of double-bass which would give Dave Lombardo a run for his money. Flotz have always had excellent guys manning the sticks, but Mary’s playing here is maniacal, or even better: sorta inhuman.

Obviously, Flotsam and Jetsam‘s sound would not be as easily recognizable as it is, if it wasn’t because of A.K. signature vocals, and whatever Knutson recipe is, he should share it with some of his peers. Long are the days of those helium fuelled shrieks of his, and truth be told, they were meant for a different age. His vocals register has aged nicely, incorporating new dynamics while still unleash fury and aggression if needed. For some newcomers to the band more used to hear brutal vocals, it might be more difficult to get accustomed to Erik‘s voice, but for all the other people that comes from heavy metal, listening a singer as him in a speed-thrash album is a fucking pleasure. 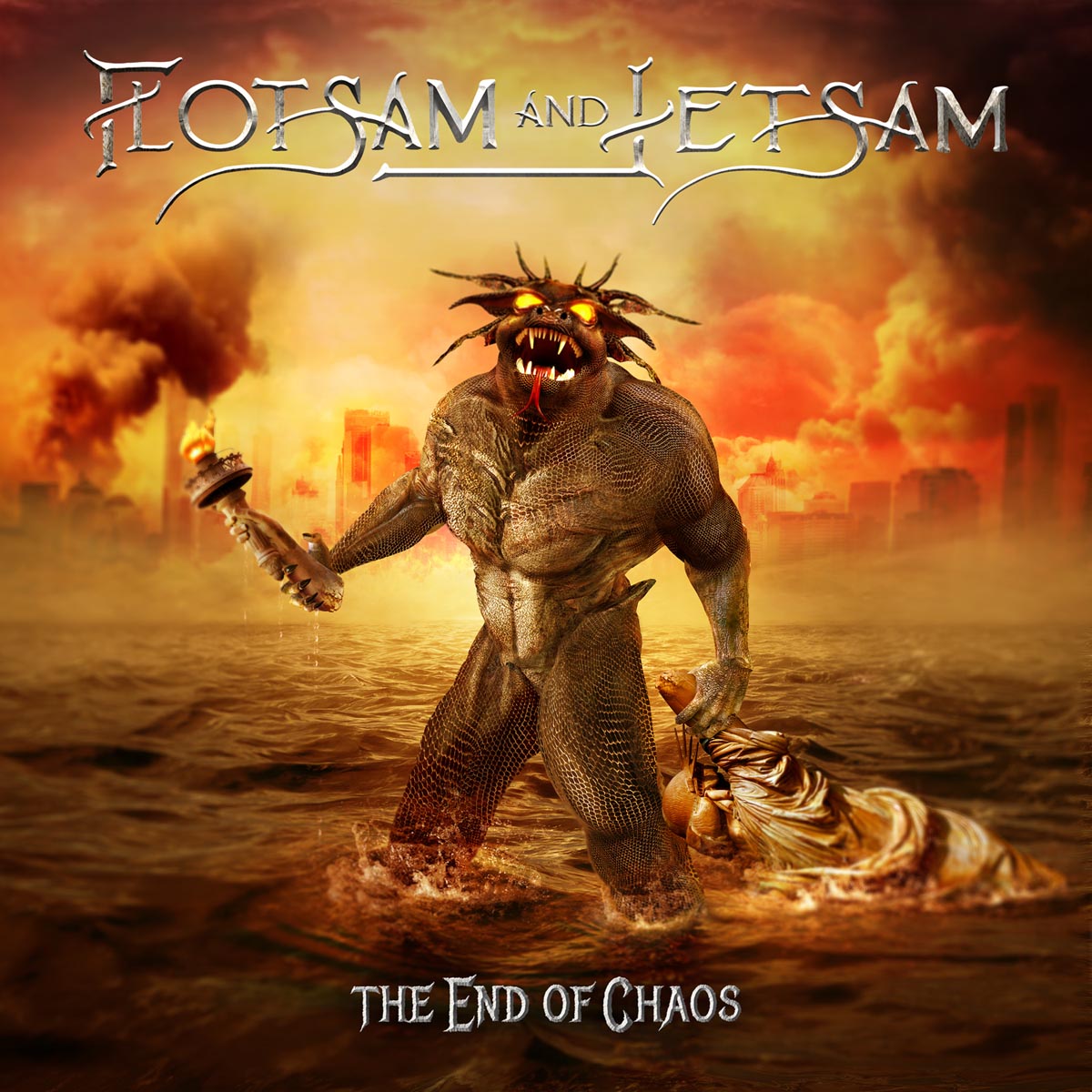 “The End of Chaos” Album Artwork

“Control” is the second track in the album, and according to what Mike Gilbert said in our recent interview, his personal favorite of the twelve. A short, robust and controlled burst of surgical speed-thrash, plenty of strength and melody, it sets the tone for the vast majority of the content in The End of Chaos. The band has upped up the ante and pressed the gas pedal to the floor in terms of speed, therefore if you are missing the days of Cuatro and Drift, you need to look elsewhere. The album’s first single “Recover” is next, a classic mid-paced, in-your-face kind of tune, sporting a power-metal vibe and a soaring chorus where A.K. truly shines. The powerful melodies bounce around you, and the cadence of choruses will linger in your ears for days. “Prepare for Chaos” picks up the melodic thrash-metal roots, opening in true Flotz fashion with Gilbert and Conley dense, multilayered and lethal guitar attack churning over intricate the drumming, and Knutson spitting the premonitory lyrics “Prepare for the chaos, prepare to die!”. Clocking on less than 4 minutes it’s a bit too short for my taste, but there’s so much going on here that you won’t leave unsatiated.

“Slowly Insane” reminds you that speed is one of the main ingredients here, unleashing galloping thrash riffs of epic proportions combined with energic solos and the omnipresent and towering bass assault. This song it’s a short aperitive for one of the album highlights, the infectious “Architects of Hate”, a threatening rampage of metal that takes you back to the heyday of ‘80s thrash genius, generously sprinkled with lethal grooves and a venomous – sort of black-metal infused – echoing chorus that leaves little to none to the imagination “I drink the blood of everyman, I sweep the catacombs of hell”. The dueling guitar harmonies in the solos are vibrant and impeccable and the whole song exudes a frightening vibe.

“Demolition Man” is the second album single, a shining and bombastic thrash metal statement that channels the vibe of the predecessor eponymous album. Michael Gilbert and Steve Conley lay down exquisitely harmonized riffs and face-shredding solos before tearing back into the groove, meanwhile A.K. sings his vocal lines like a possesed. He could sing the phone-book and still would be worth listening. “Unwelcome Surprise” is to my ears the song that harkens back the most to the old Flotsam and Jetsam material. Piercing thrash riffing guitars and memorable melodic choruses intertwine with Spencer’s malevolent and punishing bass harmonies, accompanied by an Maiden-esque guitar harmony moment before a tastily fast – yet too short – solo kicks in. Did I mention the drumming is off the charts?

“Snake Eye” and “Survive” highlight the band’s open-minded compositional strength, within the limits of their identity but refusing to recycle and rehash old tricks, mixing variations and tempo changes with well-placed bridges and effective guitar solos. The latter is arguably Knutson more epic performance in the whole album, expressing the moods of the lyrics in an anthemic way, certainly a track that I’d love to see played live. “Good or Bad” is a sleazy thrasher flooded with hooks and raw attitude, and the mid-section soloing fueled by the driving bass and the archetypical thrash-metal drumming lines are pure beauty.

In a record named The End of Chaos, a closer track entitled “The End” feels natural. The fastest track of the pack, and possible one of the fastest tracks Flotsam has ever produced, is simply a fantastic ending: a full-steam ahead, furious and rumbling exhibition of expert musicianship. It oozes a punk vibe and the uncontrolled oomph of a pack of ravening wolves running down their prey. Its main riff – which saving the 30 years gap could have felt at home in any of the songs from No Place for Disgrace –  and the contagious verses “I can see the end is taking over, and it always bring me down” will remain stapled to your brain… way after the last note has faded.

Reinventing themselves is as high as a risk for bands that have been in the game as long as Flotsam and Jetsam has, as it is trying to keep themselves relevant in their musical endeavors. In a metal subgenre like thrash or speed, penning a record that sounds modern and fresh while still remaining true to their roots is easier said than done for any new band, let alone for three decades veterans. When their previous album landed in my lap two and a half years ago, I wrote: “this is the sound of a band downright rejuvenated and ready to remind the world that they were once contenders for metal’s hallowed throne for a damn fine reason. They are back with a vengeance and are giving the vast majority a run for their money”. Despite how high the bar was set with at the time, today I’m happy to ascertain that Flotsam and Jetsam has not slacken the reins, and this record is nothing else but the band at the very top of their game. If the Phoenix disciples arose from their ashes in 2016, now the mythological bird is angry, and out for blood. The End of Chaos goes for the jugular from the get-go and it’s already seating at the top of my metal albums for 2019.

“The End Of Chaos” tracklisting:

Despite I wish the album was more abundant in the slower thrash-oriented moments department, "The End of Chaos" is a ruthless declaration of calculated guitar riffs, eruptions of velocity combined with doomy bass lines, irritated vocal lines and unforgiving high-class drumming, all of the above hardened with a crystal-clear mix and production to boot.