Ok, let’s get something out of the way immediately: I’ve always had some sort of a love affair for Flotsam and Jetsam. In my personal opinion they have always deserved way more attention and recognition than they had, they are a top-notch band destined to forever play second fiddle to the media behemoths, like Metallica, Slayer and Megadeth. Flotsam and Jetsam will forever be known as the band that Jason Newsted played in before joining Metallica after the death of the previous bassist Cliff Burton, however people tend to forget the tiny fact that back in the ages when the thrash movement was a very well established one, with acts like Metallica, Dark Angel and Slayer belting out more than two albums out there; they stepped into the scene with their first effort “Doomsday for the Deceiver” album that nowadays have garnered the status or a genre’s classic, a monumental speed-thrash statement capable of producing multiple auditory orgasm, and likely Jason Newsted’s highest career moment ever. Truth is there was a period in their musical career when releases like “Unnatural Selection” and “My God” were uneven and pale in comparison with previous efforts, with frequent line-up changes and even periods of dormancy, but wait a minute… can you name a single band on Earth which hasn’t had a slip? I’m goddamn sure you can’t, even the mighty four have had their shadowed moments (Yes “St. Anger” and “Risk” I am looking at you).

Anyways, historical rant and Flotsam and Jetsam‘s Earth shattering debut aside, they have managed to stay in the game for at least three decades, and next May 20 they will be treating the fans with a new musical journey, a eponymous album for which the diehard Arizona veterans come back sporting a revamped line-up. The current incarnation of Flotsam and Jetsam comprises Eric ‘AK’ Knutson, Mike Gilbert, Michael Spencer, Steve Conley and Jason Bittner (Shadows Fall’s drummer). They got together in January 2015 to start rehearsing for their 2015 European tour dates and to commence writing for the band’s 13th record. After a 5 month initial writing process, the band completed 18 rough ideas to start having Bittner track drums to. At first the band thought about a double release, but realized it would be better to concentrate on an album’s worth of killer material by what essentially is a new band with a 30-year history. 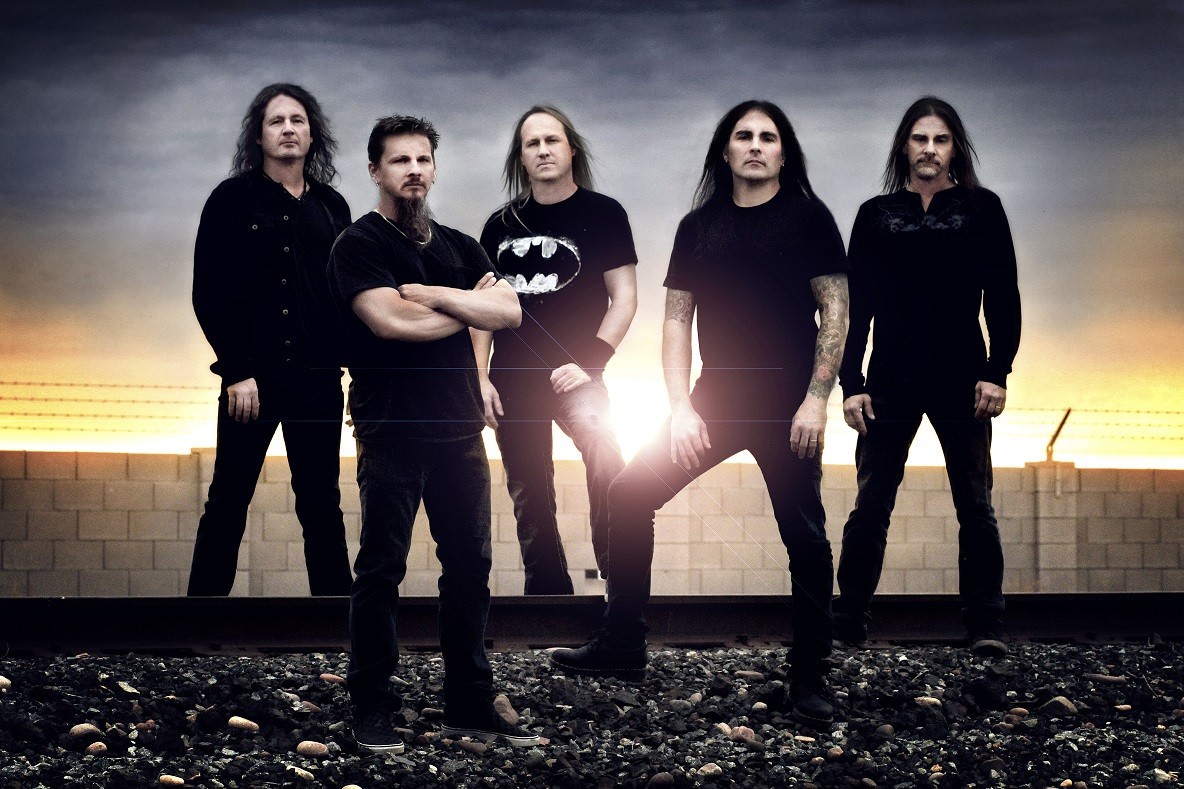 So what is the new album like? It is like taking a ride in the heavy metal machine and setting the destination for the late 80s, a simpler time where hair was big, the pants were spandex, and Metallica was still playing metal. The band has returned to what they do best: pure fuck… in-your-face metal. All their trash metal roots are here, all the ingredients they became well-known for are in place; this time driven by an increased vigor and a brash, aggressive sound. However the album sound isn’t stilted and locked in the 80′s; on the contrary the band sounds more current staying true to their roots than they ever did chasing a trend: this record is a robust and lethal mixture of heavy highly-melodic and intricate thrash metal; frantic and forged by pure fire, strength and experience. If I ever found myself thinking “this riff might get stale if it is repeated one more time”, it fucking changes before I can finish my thought. The album never gets boring, it just rips face from start to finish, then afterwards pisses on your corpse.

The guitar’s riffing is unstoppable and intense, although they have always been a guitar-driven band, this time the twin guitars of Mike Gilbert and Steve Conley serrate, thrash and churn over the venomous vocals of Eric ‘AK’ Knutson, who sings his lungs out spitting pure angry along the verses, proving a seemingly ageless vocal performance (I’ve always been a fan of his delivery and willingness to stretch beyond the standard thrash snarl) Jason Bittner’s drumming injects a new life to the band’s overall sound: astounding and precise drumbeats, mixing complex patterns in the speedy parts and dropping some nasty double bass drumming here and there. He’s a drumming school on his own, and his tight playing paired with Michael Spencer’s infectious and killer bass lines (he goes tornado most of the times and you can feel it!) weave the perfect backbone for the two guitars to outstretch themselves. Fans can judge by themselves by listening to the dynamic bass intro of “L.O.T.D” or his effortless impersonation of Steve Harris’ playing style in the album’s first single “Iron Maiden”: a damn fine homage to the UK’s finest heavy metal band in which the band employs the classic Iron Maiden gallop, twin-guitar attack and certainly a bit of a nod to the Maiden’s classic tune “The Trooper” on the verse; while Eric’s vocal channel Bruce Dickinson admirably.

The temptation to parallel “Flotsam and Jetsam” to “No Place with Disgrace” is irresistible, particularly when you consider the band recently re-recorded the latter album in order to be able to offer their fans with a remixed version due to the difficulties in obtaining the original master tapes. With far more finesse but no less speed, this new effort rolls with a vengeance; it’s vicious from the get-go and doesn’t die until it’s over: it simply epitomizes what a thrash album should be. Many older bands in recent times have failed to successfully reinvent themselves, become irrelevant to their original fan base or never been able to top their first few releases. That a band can come out some 30 years later, after suffering all the setbacks, and deliver an album this good and fresh is inspirational and utterly admirable, to say the least. To put it in a few words: this is the sound of a band downright rejuvenated and ready to remind the world that they were once contenders for metal’s hallowed throne for a damn fine reason. They are back with a vengeance and are giving the vast majority a run for their money. For me the strongest contestant for the thrash metal album of the year!

In addition to being available as a digipak CD, the album will also be available as a limited gatefold 2LP edition in black, red and gold, both limited to 500 copies. A limited edition box-set (500 copies) will also be released and includes the digipak, a Flotsam And Jetsam flag (official tour backdrop design), patch, printed autograph card, and certificate of authenticity. Do not waste time and grab yours, Flotzilla is back in town!