2018 has been a rather incredible year for the bi-coastal Fernando Perdomo, a Miami musician who has earned great success since playing his trade at his own Reseda Ranch Studios in California these past several years. This year has seen a staggering amount of musical output from a multi-instrumentalist singer-songwriter guitar gunslinger producer who already has a rather impressive outpouring of music in any given year. The year began with the release of his prog solo album “Out to Sea,” continued with his completely unexpected birthday self-release “Fernando Perdomo Has Lost His Voice” where musical friends of the musician paid tribute to him by putting their own spin on his songs, then evolved further with his collaboration in Dave Kerzner‘s In Continuum band and the announcement of “Out to Sea 2,” but somewhere in the middle, he surprised all of his fans. He announced a GoFundMe project to record at the legendary, world-famous Abbey Road Studios in just a matter of weeks from the campaign’s launch date. And, somewhat miraculously, his faithful fans rallied and made the dream (whether in stereo or not) a reality. Perdomo spent a whirlwind day recording in Abbey Road Studios, mostly by himself but also joined by friends, while touring with Dave Kerzner‘s solo band in the UK. The end result is the forthcoming Fernando Perdomo solo album, aptly titled “Zebra Crossing.”

“Zebra Crossing” is many things. It is a huge accomplishment for Perdomo, maybe his crowning achievement. It is a love letter to The Beatles. It is a love letter to his partner, Cyndi Trissel, who documented the day’s recording process, and is also credited on the album for photography, layout, songwriting, and even clarinet performance. And it seems like a reflection on his entire life and what has led him to this admittedly incredible moment, recording at Abbey Road, the titular Zebra Crossing once traversed by John, Ringo, Paul, and George. To be fair, though, bits of the album were recorded back at Perdomo‘s own Reseda Ranch Studios, but the vast majority was completed while at Abbey Road. Fans familiar with Perdomo‘s body of work will know his album “Voyeurs,” which was recorded over a series of sessions while friends and fans watched Perdomo record multiple instruments and sing multiple tracks over one or two Facebook Live sessions at a time, culminating in a fantastic little release of classic Perdomo singer-songwriter tracks. So it should be no surprise he was able to quickly knock out so much tracking over an intense day at Abbey Road, where one can only imagine the urge to just goof around on the Mrs. Mills piano or stare in awe at the surroundings, rather than get any actual work done.

So, how does “Zebra Crossing” stack up against the rest of his works? To put it succinctly, it’s likely the best collection of music that Perdomo has put together on one album. Again, the majority is written and recorded by Perdomo, maybe the most prolific musician this reviewer follows. The majority is played by Perdomo, but where he brings in friends – Durga McBroom providing background vocals on “Home,” Ken Sharp making a few appearances throughout, The Zebra Crossing All-Star Band on “While My Guitar Gently Weeps” (yes!) including Mr. Dave Kerzner himself – their presence serves to sweeten the album tremendously. String flourishes abound, Stephen Kalinich provides a thoughtful spoken word passage, and background vocals throughout the album strongly underline Perdomo as lead vocalist, whose voice only continues to get stronger and more confident as time passes. The only time we don’t hear Perdomo as lead vocalist is when the combined voices of Diane Birch, Shawn Lee, Jason and Daphna Rowe knock it out of the park as part of The Zebra Crossing All-Star Band to close out the album. 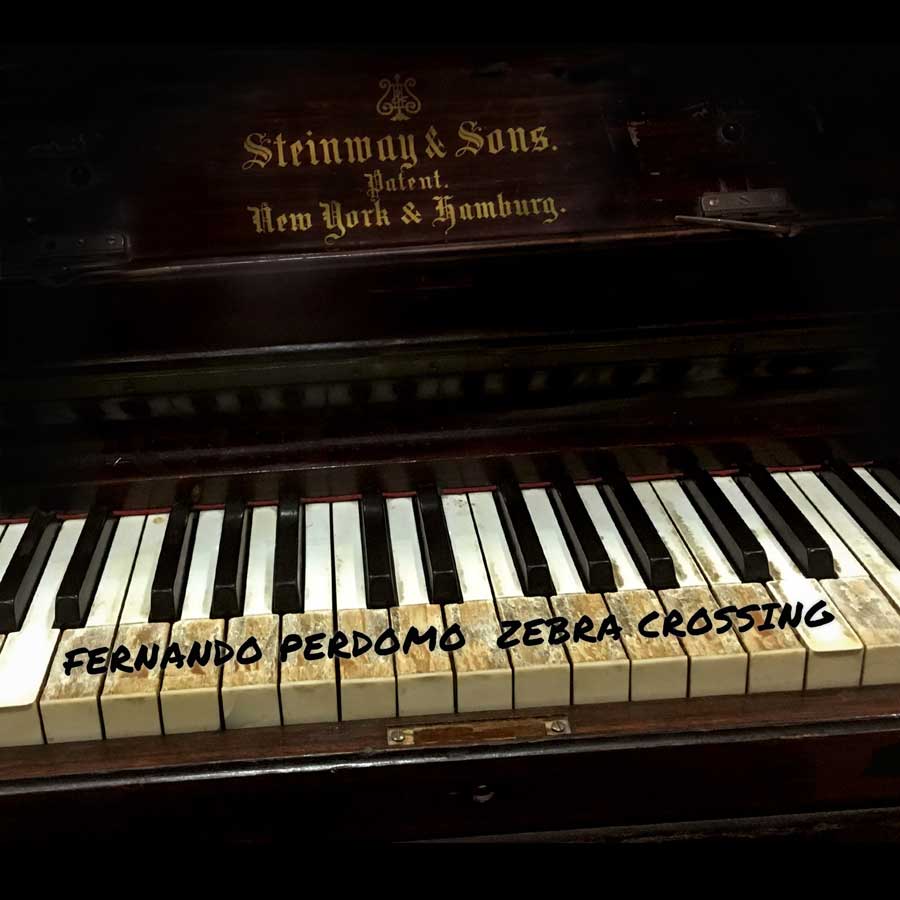 “Zebra Crossing”, as mentioned earlier, is a huge hug and kiss sent straight to The Beatles. Even aside from the frequent presence of the Mrs. Mills piano (the 1905 Steinway Vertegrand piano named for Gladys Mills, heard on Beatles classics “Penny Lane,” “Lady Madonna,” and others) whose battle-hardened visage graces the album cover, there are such characteristically “Beatles” moments throughout the entire album which the keen-eared listener will notice, proving Perdomo‘s vast knowledge of classic music. From the obvious inclusion of “While My Guitar Gently Weeps” to the less obvious moments like the quirky outro of the tour de force “Zebra Crossing” and the inclusion of the final piano chord which closes out The Beatles‘ “A Day in the Life,” The Beatles love is woven into the DNA of this album.

Most importantly, it is the perfect marriage of the two main sides of Perdomo‘s musical output. It is heavily entrenched in his singer-songwriter side as displayed on his albums “The Golden Hour” and the aforementioned “Voyeurs,” but also dabbles enough in his progressive / experimental side as heard on “Out to Sea” or “The Golden Age of the Jazz Fusion Major Label Record Deal” as the title track “Zebra Crossing” goes to some dizzying progressive-inspired heights (especially as there are those who consider The Beatles the original progressive rock band,) and even the poppiest of pieces on the album are sonically filled with so many layers of goodness. Where one type of Perdomo album might leave the listener yearning for the other, and vice versa, “Zebra Crossing” will likely tick most of the boxes of a seasoned Fernando Perdomo fan, but is accessible in all the best ways that newcomers to his work will find much to love.

No stranger to prog, this reviewer’s personal favorites are, again, the expansive instrumental title track, but also “We Were Raised” with headphones on, the bittersweet “Sundays,” and the gorgeous instrumental “Not Meant to Be,” tinged with modes giving an Asian feel which would make Marty Friedman‘s ears perk up.

If you’re a Fernando faithful, “Zebra Crossing” is a celebration of the musician’s career to date and if he continues his meteoric rise without burning out like said meteor, could mark the closing of an amazing chapter.  But where does one go after recording a solo album at Abbey Road, anyway? Only time will tell… in the meantime you can pre-order the album at this location.

All instruments and vocals by Fernando Perdomo except:

The Zebra Crossing All Star Band on “While My Guitar Gently Weeps”:

Some of the new songs on Zebra Crossing are phenomenal and among Perdomo's best. That said, as beloved as some of Perdomo's long-time fan-favorites are (Smile, Home,) their inclusion in both Voyeurs and now Zebra Crossing, after their initial releases, forces those songs to feel a little long in the tooth, even if the need to include them when recording at Abbey Road Studios is understandable. Musicianship is great as always, and while paying homage to The Beatles isn't a new idea, Perdomo makes it a relevant one in 2018, soon to be 2019. And as far as production? Well, I think that category speaks for itself. Let's just hope after all of that breakneck tracking, Fernando Perdomo doesn't have “blisters on his fingers.”