A little over a year ago I had the pleasure of reviewing what was at that moment Fernando Perdomo’s latest records “Voyeurs”. Now, I’m at it again, this time around writing about his new album “The Golden Hour”, which is officially released today. Fernando Perdomo is not your average musician, he’s not the kind of guy you could pin-point to a single musical genre or sub-genre. One day he could be ripping a King Crimson solo in the best Robert Fripp incarnation and the next one he can be singing along the most grandiose, pompous and bombastic Aviary’s melody with a big smile painted on his face. I’ve met very few musicians with such a chameleonic nature and musical pedigree, he certainly lives and breathes music as I wrote some months ago.

Born in Miami Beach and currently residing in LA, Perdomo is not only a multi-instrumentalist, but also a singer, songwriter, a record producer, and a vintage records collector. He has toured, performed and recorded with a multitude of artist in many different genres, and also produced and played on countless records, alongside artists like Todd Rundgren, Linda Perhacs, Cait Brennan, Dean Ford, Fiona Apple, Beck, Emitt Rhodes, Cristian Castro… the list goes on and on. Perdomo is also the main guitarist and partner-in-crime, of prog-rock luminarie Dave Kerzner, with whom he has worked for several years. Actually was through Dave Kerzner music that I first got acquainted about Perdomo’s musical endeavours.

Perdomo moved to Los Angeles in 2012 and opened his own studio “Reseda Ranch Studios” in Reseda, in which he has been making music for over a decade now. However he envisioned his latest record in a different way. He headed down to the famous Ardent Studios in Memphis and worked with Big Star archivist and engineer Adam Hill, in an effort to capture the atmosphere, energy and melancholy mood of the classic Big Star albums recorded within those walls. Fernando was not a stranger to Ardent Studios, he had just co-produced and performed on Cait Brennan’s latest album “Third” (Perdomo and Brennan met as fellow artists on the International Pop Overthrow festival in 2012, and quickly became friends; Brennan appears in Perdomo’s “Smile” music video, and Perdomo has played in Brennan’s touring band). But this time around Fernando went all out: The main electric guitar employed on the album is a vintage Gibson ES-330 that was owned by late Big Star founding member, Chris Bell and he was also given access to the original Mellotron used by Big Star, which can be heard on every song on “The Golden Hour”. Perdomo wrote every song on the record independently, save for “Look At The Moon,” which is a co-write between Perdomo and Jordan Zevon (son of Warren Zevon) who was inspired to write the instrumental for a bridge while watching Perdomo play his original version of the song on Facebook Live. The finishing touches on the record were made at the Reseda Ranch Studios and the mixing and mastering was carried out by Grammy-award-winning engineer, Zach Ziskin. The album cover depicts a backlit silhouette of Fernando standing on Venice Beach, while the sun sets over the horizon illuminating the sky with myriad of golden tones (hence the name of the record), a beautiful picture originally taken by his friend, bandmate and world-class drummer Derek Cintron. 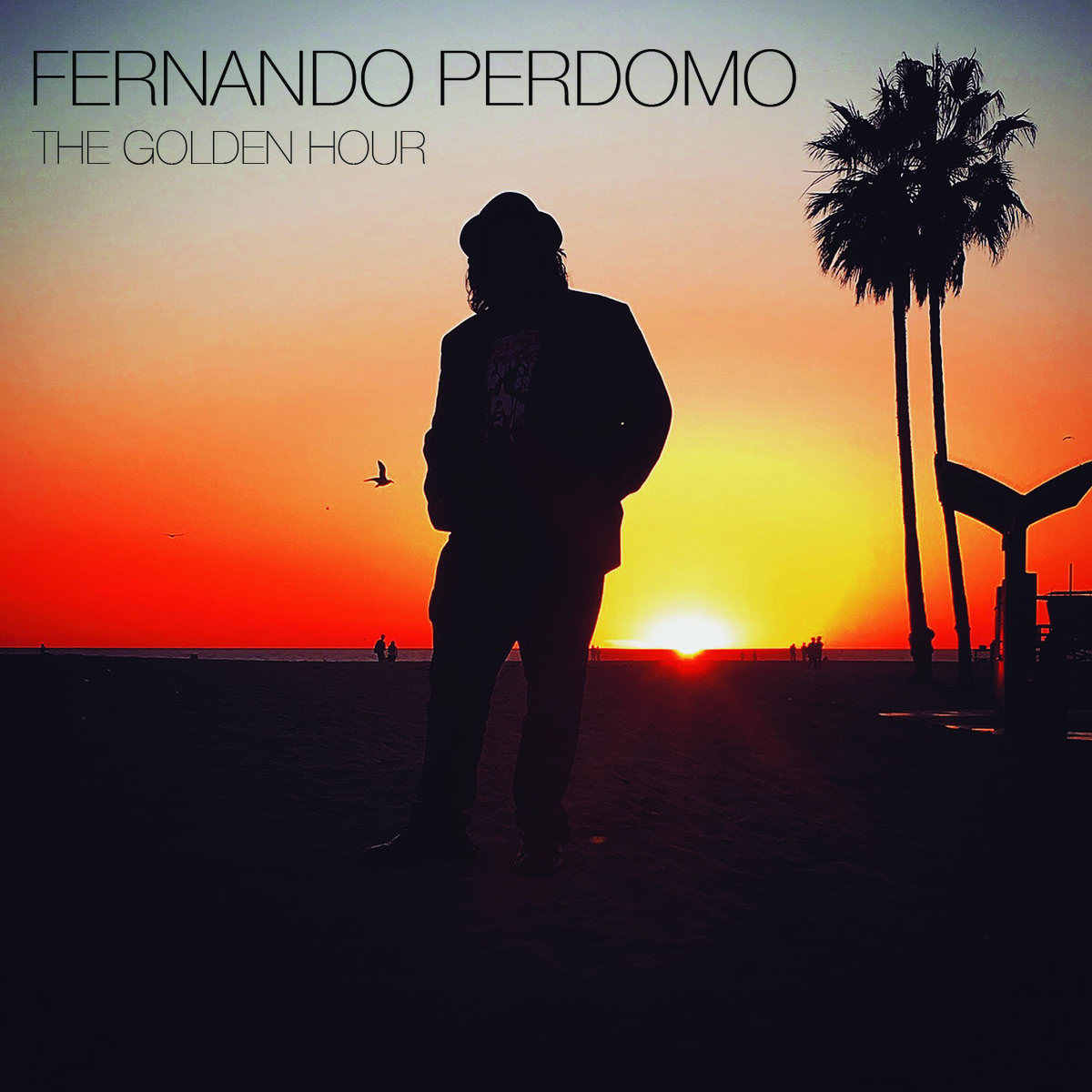 So what’s the music like? Despite being fond of writing track by tracks reviews I won’t be spoiling the readers today with a multitude of details of each song. For my ears “The Golden Hour” can be easily described as Fernando’s most exquisite and beautifully crafted effort. From the soft mood-setter piano keys in “Sunset Intro” to the closing (and longest song in the album) “Gold” – a tune inspired by the interesting Adrian Belew’s guitar tuning invented for the King Crimson’s song “Heartbeat” – the albums runs a gamut from delicate, intimate and atmospheric melodies to inspirational and vital harmonies with guitars and more energetic rhythms, all of them masterfully wrapped up by honest and vulnerability infused lyrics.

Many of the songs on the record clock in at less than 3 minutes long, and for those familiar with Perdomo’s prog-rock side this might come as a surprise, however this is not a prog-rock record and to quote Fernando himself “…Not every song calls for a long and complex guitar solo“. Despite such conciseness, every song oozes out the vast amount of emotional ground poured into them, celebrating the uniqueness and the beauty of the pop icons of the 60s and the 70s. Fernando’s eclectic musical core is in full display through each note and guitar strum. His music has the ability to lift you from your chair while listening and transport you back to the heyday of artists like The Beatles, The Beach Boys, The Byrds, and Big Star.

Pure, evocative and unadulterated music which is equal parts delightful, heartwarming and tasteful, Fernando Perdomo has set his own bar even higher with “The Golden Hour”. The album is dedicated to the memory of Fernando’s parents Orlando and Araceli Perdomo and once again to his musical professor Doug Burris who passed away on January 2016. You can watch below a “Behind the Scenes” EPK video created by Perdomo’s uber-talented significant other Cyndi Trissel, documenting the recording process.