How does one critique a band that started and pioneered a genre? Is one even worthy? Progressive metal giants FATES WARNING have been around since the early 80’s, starting out as a traditional Heavy Metal act, and further developing their sound to be widely revered as the true creators of the genre with their “No Exit” album back in 1988. There are few bands that can say in musical terms, “been there, done that“. FATES WARNING is one of those few, with 30 plus years in the field, they are one of the most complex, sophisticated and complete bands around. Progressive metal, is by definition all about change, complexity, intensity and forward movement. And right from the impressive first minutes of their twelfth studio album, Theories Of Flight, which will be released July 1st via InsideOut Music, they prove themselves true to those values and capable of delivering new material as poignant and powerful as they did with earlier classics like “Perfect Symmetry” or “A Pleasant Shade of Gray”. One single listen to the textures, momentum, mix of melodic finesse, high-level performance, attack and brooding melancholy of this record and it’s pretty evident these veterans are still plenty of energy and aiming for the future. “Theories Of Flight” is as progressive as it gets.

This new discography effort is the follow up to the highly acclaimed Darkness in a Different Light album, which had become the first release of the band after a nine year hiatus. “I started writing in January 2015,” says guitarist and main composer Jim Matheos. “About a year after ‘Darkness’ I started gathering ideas and getting serious about it.” As for the direction Theories Of Flight (which was produced by Jim Matheos and mixed/mastered by Jens Bogren at Fascination Street Studios, eventually took, Jim let his muse lead the way. “I don’t usually look at it as ‘what do I want to do?’ I’m usually just consumed by terror that I won’t come up with anything. Whatever comes up, I’m just happy that something comes up, and I let that take me in the direction that it’s going in. I don’t sit down and have a specific idea of where I want to go. The beginning is always the hardest part. Once you have the first couple songs down, then a direction starts to present itself and you take it more in that direction.” Apparently it all came rushing out in a flood, evidenced by the myriad of highlights throughout Theories Of Flight. As main lyricist, vocalist Ray Alder had plenty of musical emotion to work with. Themes of upcoming change – deliberate choices to take a different direction in life – are a large part of the album’s overarching themes of transience, disconnection and the search for solid ground. 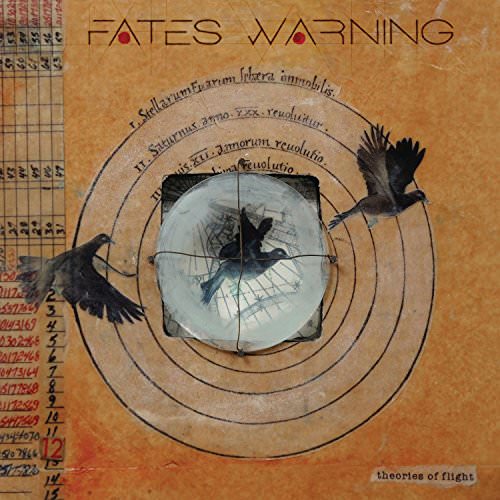 FATES WARNING has returned with a record that emphasizes guitar interplay, aggression, atmosphere and enough riveting time changes to satisfy even the most demanding progressive metal fan. From the opening track “From the Rooftops”, it is apparent they are back and in a big way. Displaying all the progressive touches that have made them one of the leaders of the genre, the song is the perfect opener. It begins with the band’s signature mellow guitar melodies bringing back memories of the Disconnected times, to suddenly a twist into a high octane salvo of pummeling guitar riffs and a huge chorus mixed with multiple motor-cortex-melting drum moments, courtesy of drummer machine Bobby Jarzombek. Past band member and current collaborator, Frank Aresti, steps in with an excellent guitar solo, while Adler uses his rich tone and emotional delivery to its fullest extent here. Alder’s singing is beautifully melodic and moving– his once legendary stratospheric high range is long gone, but his vocal performance has adapted over time to complement with passionate singing.

“Seven Stars” is a straight-up rocker, with a catchy guitar melody and a hooky chorus bearing the imprint of their 80’s songs. Adler sings “Seven stars destinations calling out my name… seven stars destinations take me far away” over a melodic structure of passionate intensity. The song morphs through several stages, always keeping a complicated core pushed by a bludgeoning rhythm section. In my opinion the perfect track for a video and/or the second album single. “SOS” takes off with an addictive riff and immediately I realize they have pushed out a bit further in every direction and there’s a ferocity not heard on a Fates album in quite some time. This songs strikes a balance between heavy, catchy and expansive, rhythmically driven with start and stop riffing complimented by Joey Vera’s maniac bass lines and Jarzombek’s class drumming. There’s a calmer middle breakdown that changes a mysterious mood to a pure dread soundscape, to later return once again to the initial riff. Once again Ray’s vocal harmonies hit the perfect mark, using once again intelligent lyrics and extremely catchy singing phrases.

“The Light and Shade of Things” brings us back down to Earth for some moments, building a very rich and slower beginning, an ambient atmospheric and distant guitar landscape that is almost hypnotizing. All of the sudden the song breaks into a completely different passage, reminding us why Fates Warning are masters of Prog, taking on a completely different mood, set in stone by a final blistering solo section and a passionate chorus topped by Adler’s beautifully reflective lyrics, urging us to trust our memories, to hold onto them even as we forge into future unknowns: “See the dark road that’s ahead / Lit by memories you knew / Now the ghosts begin to follow / Let it all come back to you.” An important characteristic of Fates Warning is that really understanding what’s going on in the music requires study. To appreciate what the band has done on this album, one simply has to listen to it repeatedly. The flow of the album from start to finish is classic Fates. The songs that, during the first listen, appear to be more straight-forward offerings grow ever-more-elegant the more you listen to them. And even the most progressive passages on the album are expressed in a neat, concise way, showcasing a compositional maturity that is simply stunning.

Ultimately, “Theories Of Flight” is a deeply personal album. One emotional highlight is “White Flag”, a five-minute tour de force, a blizzard of massive chords, searing leads, churning riffs, and backbreaking grooves that underpin Ray Alder simultaneously talking straight and singing theatrically, also including another guitar solo courtesy of Frank Aresti. An empowering powerhouse tune with freaky guitar soloing where current touring member Michael Abdow also has a guitar solo spot. With many dynamics, timbres, moods, heavy and slow riffs, and over driven passages this song is a true one progressive metal hymn.

‘The Light and Shade of Things’ is one of the album heavier tunes, sporting some of the most crude guitar riffs Fates has never produced. There is a lot to enjoy as the guitars are laden with hooks, the modern take on driving progressive metal rarely giving up the pace, save a few welcome breaths. The feast is endless, the song progresses as does the whole album; serving as the perfect counterpart to the album extra-long epic “The Ghosts of Home”. The samples and soundscapes within this marvelous composition set an almost theatrical tone for what might be the album’s emotional climax, all 10-and-a-half minutes of it. It proves to be the record’s winner as guitarist/producer/lyricist Jim Matheos digs deep into his past, mulling over the psychological repercussions of repeated childhood up-rooting and emerging with a song you just need to hear for yourself, because saying anything more would spoil an experience Fates Warning fans are going to treasure for some time to come. The galvanizing, exciting, go-back-and-listen-again moments are too numerous here to mention, it is a epitome of the term “progressive,” showcasing a diverse range of guitar work and most unconventional song structure.

The title track “Theories Of Flight” is the closing song of the record and it surprisingly an instrumental one. Rather normal in length, clocking in merely 4 minutes, it carries abundant magnificence and introspection with its acoustic-led section running over some mysterious human chat sounds. It rolls over a more energetic and kind of jamming drum driven section with a short solo before going back to a medieval-kissed acoustic sad segue once again sprinkled by human voices in the background that dies languidly.

At this point the reader has already figured this out, but I want to remark it: the musicianship displayed through this eight tracks is top notch, as expected from this stellar line up. Matheos’ guitars play crunchy heavy riffs, beautiful melodies, and the solos are nothing short of amazing. The rhythm section of Vera and Jarzombek tighten everything up. Vera’s smooth and groovy bass playing is so soulful, while Jarzombek drumming is so technically perfect without losing any of the feeling. Often drummers focus so much on the technical aspect of things that they lose the feeling, sounding robotic. Jarzombek succeeds, where so many others a failed, playing with remarkably technical precision, while never failing to feel the music.

All in all, this album is a magnificent journey, one which proves worthy of every listening second and truthfully showcases a legendary band that has gotten even better with time. An essential pickup for any lover of extremely well crafted infectious prog-metal plenty of intricacies, warmth and emotion, if this record doesn’t make your Top X of 2016, there is something fundamentally wrong with you.

The limited edition 2CD Digipak and Imported Double Vinyl will include 6 brand-new and previously unreleased acoustic bonus tracks with a total playing time of 21.23 minutes