In 2001, I wrote the following about Evergrey:

“… This band may very well save Progressive Metal from dwindling into mediocrity. This band has taken a genre that could easily spiral into a sea of self-referential pomp, and has injected into it the very substances that make metal metal. Evergrey are fast. Evergrey are heavy. Moreover, perhaps most importantly, Evergrey are pissed. With only Symphony X and Zero Hour doing so earlier, Evergrey have taken the skills, power, and brains that Progressive Metal embodies, and have flawlessly fused them with a sense of speed, fury and urgency that rivals many of Scandinavia’s finer Death Metal bands. And to think some critics call this “Symphonic Power Metal.”  Ha!..”

In 2006, I wrote the following about that same band:

“… I might have been more excited to see Evergrey if I hadn’t seen them when they were important.  Strangely accented & odd-time riffs, Rick Wakeman-inspired keyboard melodies and lengthy, epic songs seamlessly merged with Evergrey‘s brooding, semi-Gothic, semi-Death and all powerful brutal ass-kicking of a sound to create a nihilistic, pessimistic, God-hating breed of metal that was as every bit as imperial as it was impious. I’m almost tempted to arrange a candlelight vigil in Evergrey’s memory, as they were the one band I firmly believed would save metal from itself. My other favorite band at the time, Opeth, ended up doing that, and I believe Evergrey are kicking themselves in the ass for being so close to attaining the divinity they ultimately let slip away…”

Against all hope, I continued following Evergrey‘s career until 2008, when their not-bad-but-definitely-not-good “Torn” record convinced me to finally give up on the would-have-been Saviors of Progressive Metal. Curiously, Evergrey still delivered the goods on stage – their 2006 performance at ProgPower USA ranks among the finest in the festival’s illustrious history, and their 2011 performance of “In Search of Truth” was on-freaking-point, even though bandleader Tom Englund was the only guy on stage that night that had actually performed on that record. Sadly, Evergrey‘s 2017 tour of the United States literally left me sleepy; “The Storm Within” was a soporific continuation of the sound Evergrey adopted on “Torn”, as also seemed to be the case for the material that those two efforts bookend (I still don’t own them). Even the material from “Recreation Day” and “Monday Morning Apocalypse” seemed exciting when stacked against the newer stuff. Sorry guys, but Need upstaged you.

That was it. I was officially done with Evergrey.

Then Tom Englund joined one of my fave prog-metal bands, Redemption, replacing the band’s original singer, the remarkable Ray Alder.

Redemption, of course, has a habit of alternating fanfuckingtabulously amazing albums with albums that are merely great. Redemption honcho Nick van Dyk has written many of the most moving songs progressive metal has produced in recent years. I was definitely impressed by Long Night’s Journey into Day and Tom’s role in the album (Read my review here).

Then, the Sonic Perspectives editor in chief sent me the promo for new Evergrey album and asked me to give it a listen. I told him “I will, but I haven’t liked the band’s input for several years. Maybe I’m not the right guy to review this”. He insisted “Listen to this and then tell me what you think”.

Expectations set low, I allowed myself to be taken in by the brief and somewhat “Disconnected” intro to opener “A Silent Arc.” Eighteen seconds into what’s perhaps a subliminal nod to Ray Alder, we, the listening audience, are mercilessly ambushed with a furious, trem-picked, black metal-inspired assault that, even more mercilessly, allows us to surface ever so briefly to gasp for a half-lungful of air before yanking us under again. 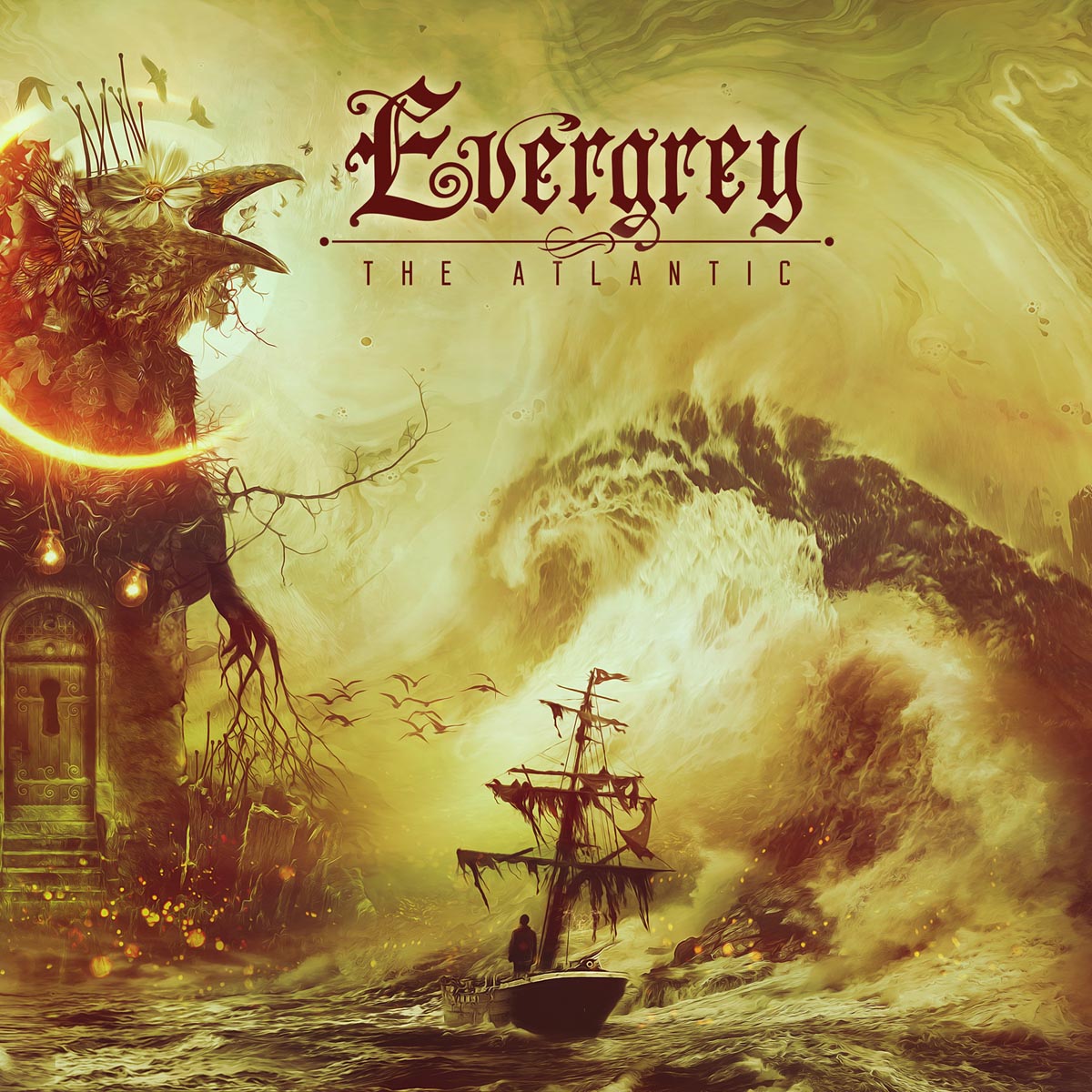 The assault continues, but assuages into a beating accompanied by the down-tuned heaviness that’s typified Latter-Day Evergrey, but playing an actual riff, a strangely-accented, off-kilter one at that. Then Englund sings.  That menacing, anguished howl has never lacked gravitas, but it at last has found its conviction again. Whereas recent Tom did an admirable job singing over mostly forgettable material,  rejuvenated Tom is fucking shit up, roaring away with frightening aplomb and a downright scary disposition, while new Evergrey (who looks an awful lot like old Evergrey) rips away with a sense of urgency it’s lacked for over fifteen years. Rikard Zander‘s delicately layered melodies over the verse overcome the rest of the band with an unnerving tension that only escalates as the song progresses, and that tension is at last released with a desolate refrain straight out of Evergrey‘s more recent playbook. New Evergrey is latter-day Evergrey at last catching up to old Evergrey. And it’s brütal.

Tensions rise further as a march-inspired interlude soon gives way to the album’s first guitar solo, a soaring trade-off between Englund and longtime collaborator Henrik Danhage, who along with drummer Jonas Ekdahl, seems to have charmed his way back into the band a few years back after a brief absence. Englund and Danhage are at their most emotive with these lofty leads, eschewing their obvious shredding ability in favor of letting their instruments just weep for a moment. “A Silent Arc” then deescalates, Englund and crew masterfully steering this ship into bay so that the passengers may nervously disembark. Dry land at last!

Ladies and gentlemen, that was just track one. I chose my words carefully when I mentioned earlier that this song progresses.

“Weightless” follows in a groovier vein, with Zander once again adding a layer of discomfort. While this song is certainly derivative of the band’s later efforts, the exigency with which it’s executed towers over anything Evergrey has released in a good dozen years. If “A Silent Arc” proves that Evergrey can still write exciting songs, “Weightless” proves that Evergrey can also play simpler tunes excitingly. “All I Have” sees the band experimenting with Katatonia‘s current sound, and again features wonderful soloing, while “A Secret Atlantis” harkens “The Inner Circle,” an album I was certain would be good Evergrey‘s last gasp.

Following a masterful composition with three that are merely great seems like a pretty good move, but following those merely great tunes with the full realization of what Englund has intended the last several Evergrey albums to be is a genius move indeed. If “A Silent Arc” is the entrée, the intervening tracks are the sorbet that prepare us for “End of Silence,” a moody, five-minute, mid-tempo journey that finally brings Englund‘s vision to its conclusion. Once again recalling The Inner Circle moodiness and sporting Zander‘s skilled layering, the song transcends its own plodding, monotonous “riff” almost as soon as we embark; and Englund‘s agonizing squall supported by Zander‘s succinct ivory-tinkling demonstrate that the intro riff was never intended to be the voyage, but merely the first vessel used on a journey that intensifies with Zander‘s classically prog-rock melodies; before bursting into a defiantly simple yet dizzying harmony solo that recalls “Rulers of the Mind,” from the other-wordly In Search of Truth. Slick move, fellas. I dig it.

“Currents” is something of a throwback as well, with engaging but not head-spinningly complex riffage ushering Englund‘s inimitable hooks, and Zander‘s overlaid melodies resembling predecessor Sven Karlsson‘s more than ever (or necessary). And those currents bring us directly to The Atlantic‘s second apex, the melancholic “Departure,” a veritable expedition spearheaded by Johan Niemann’s bright and trebly bass, Danhage‘s sedate acoustic strumming and lush textures, Englund‘s bereft clamoring, and Zander‘s delicate melodies. “Departure” is indisputably one of the masterworks of this record, an elegiac lament relentlessly but patiently pushing forward with harmonic subtlety unhindered by its own tribulation or its need to conclude. “The Beacon” continues in the album’s earlier direction before album-closer “This Ocean” brings The Atlantic to a satisfying conclusion.

So what’s the verdict on The Atlantic, and Evergrey in general? It’s safe to assume they will never follow in the direct footsteps of In Search of Truth; that much was obvious within months of its release. It’s a damn shame that this will never happen, as that album has stood the test of time more than any Evergrey album before or since, with only Solitude Dominance Tragedy, its direct predecessor, even coming close. Indeed, In Search of Truth ranks among the finest prog-metal albums ever released, and still offers surprises when I listen to it even as it approaches the legal age of majority. However, to measure all subsequent Evergrey releases against that monument of a record is not only a disservice to Evergrey The Unit, it is also a disservice to Evergrey the Individuals; no amount of bitching and moaning on my part will make these five men the same five men they were nearly twenty years ago, the obvious personnel changes notwithstanding. It is with bittersweet reprieve that I’ve finally released the possibility of that day ever coming, and to be completely honest, letting go of that idea has brought no small sense of relief.

And that has liberated me to appreciate The Atlantic for what it is rather than what it might have been under different circumstances. It symbolizes the ripening of Englund‘s vision for his craft and the music he creates with his very capable partners, and it only looks back in order to look forward from that vantage point. The Atlantic is neither a retreading of old ground nor a meandering continuation of whatever the last few records were supposed to be. Rather, it’s a collection of lessons learned over the band’s furious early days, its blistering second and third efforts, and the circuitous road on which they’ve found themselves since. The Atlantic is the record Recreation Day wanted to be, the record The Inner Circle nearly was, and what I wish the last decade of Evergrey releases had been. Well done gentlemen, you’ve got me excited again.

Evergrey have finally released the spiritual successor to In Search of Truth. The Atlantic is the sound of Evergrey 2019 and it is arguably their final step through a tumultuous road, a gradual evolution leading to the path of the progressive-metal throne. They have licked their wounds, learned their lesson and primed for this return. Your mileage may vary, but whatever your previous voyage through Evergrey’s music has been, this record deserves your undivided attention. Welcome back, guys. We've missed you