Evergrey have long shifted between the shadows and the spotlight of progressive metal, a near mythical sensation with a steadily growing discography. Their appeal is drawn from the dark decadence of their sonic ventures, led by the soulful timber of front-man Tom Englund. Captured by heartfelt lyrics and a ceaseless sense of sincerity, countless fans around the globe have been touched by the sweet melancholy of Evergrey’s majesty. “Escape of the Phoenix” is the next step in an increasingly impressive legacy, and one which will undoubtedly please longtime fans and newcomers alike.

Since their inception in 1995, the band has faced a series of stylistic evolutions within the walls of progressive metal, with an adherence to darker imagery as their defining feature. There are few acts in the genre with such a claim to endurance, and even fewer with a discography as consistently stunning as Evergrey’s. From the rawness of 1998’s “The Dark Discovery” to the modern brightness driving “The Storm Within,” Evergrey has produced an unwavering output which builds on the skills of its musicians and the pillars of emotional sincerity.

This album is yet another testament to Evergrey’s remarkable perseverance, and proof that the well of creativity has not yet run dry. Coming twenty years after heralded opus “In Search of Truth,” and just two years after the conclusion of an ambitious trilogy, “Escape of the Phoenix” is an artistic masterpiece which artfully balances the beauty of vulnerability on a sharp metallic edge. From enticing hooks to lofty choruses, this album brings with it the very best Evergrey has to offer through a riveting listening experience.

Evergrey’s atmospheric tone has taken a noticeable shift over the past decade, the first hints of newfound boldness shining through the victorious sheen of “Hymns For The Broken.”  The overt melancholy of “The Inner Circle,” which later bled into the fractured abandon of “Glorious Collision,” became quiet in the face of something like hope. “Hymns For The Broken” was the first tentative steps towards brightness, the result of learning to live alongside darkness as an old friend. And once the doors of acceptance were open, a storm came rushing in. Overtones of victory mixed with anguish as “The Storm Within” gave listeners some of Evergrey’s most beloved crowd-pleasers and live staples, later concluding with the multi-album journey with the tumultuous waters of “The Atlantic.” Marked by deeply personal expression and concurrent sonic evolution, the last decade has seen Evergrey grow wings and soar into their present selves with confidence.

“Escape of the Phoenix” follows predictably in this tonal shift, but offers a few distinct returns to roots with its melodic outpouring. “In Absence Of Sun” is breathtakingly impassioned, with a delicate piano hook that would not find itself out of place on “In Search Of Truth.” Though the band has been trending towards increasingly heavy and straightforward elements, this album takes a more holistic approach which grounds their sound. Englund maintains his strong vocal lead and charismatic allure, while keyboard player Rikard Zander is once again given the opportunity to flourish. “Escape of the Phoenix’‘ has some of the most forward keys Evergrey has seen in more than a decade, and a mix that respects the duality of their force and fragility. Zander is responsible for some of the most memorable melodies not just on the present record, but across Evergrey’s entire discography, and it’s a pleasant treat to see his contributions receive such a prominent role.

First single and opening track “Forever Outsider” gives listeners a taste of something both fiery and classic, the perfect lead into an album without perceptible weakness. Blossoming bass tones and a punchy chorus make “Forever Outsider” one of the clear standouts which will find its way into the live rotation, but it also teases at the heartfelt lyricism which has always given Evergrey a sincere creative advantage. It also has the edge of the unmistakable Evergrey solo, a signature imbued by the practiced hands of longtime guitarist Henrik Danhage. A similar appeal follows in “Eternal Nocturnal,” yet another single from the album, and the quintessential delivery vehicle for an unforgettable chorus. Accompanied by a powerful music video from director Patric Ullaeus, “Eternal Nocturnal” is one of the most thrilling tracks from the album and the best showcase of Danhage‘s impressive capabilities. 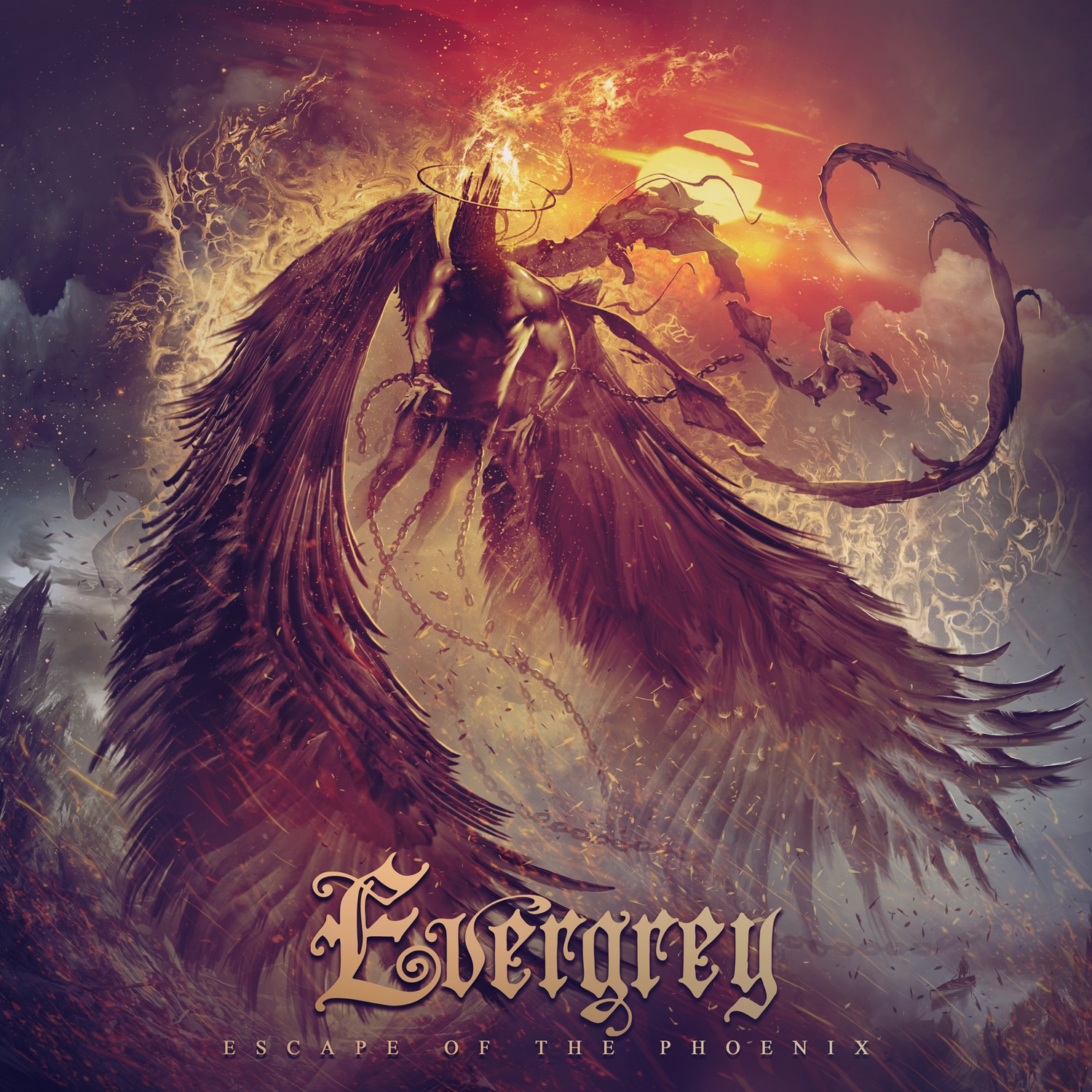 The singles are far more than just curb appeal; they each fit cohesively into the arc of the album. “Eternal Nocturnal” plays with vulnerability alongside hope, and acts as the perfect successor to the earnest “In Absence of Sun.” This pair of songs embodies some of the haunting expansiveness which made both “In Search of Truth” and “The Inner Circle” so captivatingly timeless. The opening piano to “In Absence of Sun” welcomes Englund’s mournful voice with his usual tenderness, but the swelling of a distant choir gives the already darkened atmosphere an ominous touch. The gradual escalation of intensity to a crowning chorus gives “In Absence of Sun” the most brilliant pacing on the album, capturing a tidal ebb and flow across a delicate piano and touching guitar melody. If there is such a thing as perfection, the dark tranquility of “In Absence of Sun” comes close. Sparing percussion serves as a distant heartbeat, opening the listener for the coming might of “Eternal Nocturnal.” Together this forms the album’s apex with a simply brilliant display of songwriting and musicianship.

Despite their longtime success, Evergrey has only sparingly reached beyond the boundaries of their own original creation. This includes a handful of covers interspersed throughout their discography, and few features from established artists outside of their immediate lineup. The last notable contribution was Floor Jansen to two tracks on “The Storm Within,” giving Englund an uplifting female counterpart in the album’s most moving moments. “The Beholder” is a bold step forward, as Evergrey took a gamble on one of progressive music’s most hotly debated vocalists. This midpoint in the album features the vocal contributions of none other than Dream Theater’s James LaBrie, and integrates his distinct vocal style with absolutely seamless grace. Mid-paced and mildly repetitive, “The Beholder” is a dreamy and pensive track which begins with Englund’s usual charm. As the song progresses LaBrie’s voice rises to join with Englund’s, mixing together for a fantastic duet. Each note seems perfectly attuned to LaBrie’s register, and he maintains a smooth intonation which serves to ground Englund’s tendency to soar. The creative risks have paid dividends, culminating in a chilling final chorus which strikes straight to the listener’s heart. A unique and unexpected complement to Englund‘s established strengths, the addition of LaBrie to the album gives “Escape of the Phoenix” even greater dimension.

It would hardly be an Evergrey album without moving ballads, and “Escape of the Phoenix” delivers with the thoughtful grandeur of  both “Stories” and “You From You.” The latter is reminiscent of “Hymns for the Broken,” touches of bittersweet exhaustion overwhelming its expansive reach. “The Atlantic” was characterized by sincere introspection, and the pensive waters of “You From You” carries on this spirit. Both bring energy and momentum as they weave tales of hope and loss, tying into the overall progression of the album with expert placement in the tracklist. They offer a showcase of songwriting which is unafraid to have a particular passage linger or chorus repeat, as those extra moments are crucial for listeners to truly experience the depth “Escape of the Phoenix” has to offer.

As one of their many strengths, Evergrey excels at creating masterful album conclusions. “Leaden Saint” follows in the path of haunting heaviness, opening with a strong metallic edge before opening up to a more distant vocal approach. The album finally meets its end with “Run,” which begins with an energetic kick and vibrant enthusiasm. That glimmer of hope which had first emerged in “Stories” comes through in full, exploding into a dazzling sunrise. Guitars and drums gallop in tandem, a radiant expression of what may be best described as pure bliss. In a way, it feels as though “Run” is the true conclusion to the prior trilogy, as it offers words of resolution that prior albums never quite reached. Both lyrically and musically, there is a sense of fulfillment and conclusion in this track, coupled with the fresh air of reinvigoration. And so “Escape of the Phoenix” ends, with a bright ray of light piercing the clouds.

“Run” may conclude “Escape of the Phoenix,” but it carries with it a promise of new life. Evergrey have found themselves again, stepping away from a trilogy and finding new ground without abandoning their identity. There is no question this is a band well into their career, carrying with them both the marks and wisdom of age. Englund’s voice has attained an ever-greater soulfulness, and Danhage’s characteristic playing style gives the album a strong dose of eclectic personality. And in masterful control over keys, Zander continues to grow and evolve with a refreshing injection of synth which pushes “Escape of the Phoenix” firmly into the modern era. Altogether the band functions as a seamless unit, the mix doing justice to each musicians’ immeasurable talent.

As a longtime Evergrey fan, “Escape of the Phoenix” feels just like home. With its expansive breadth and absolute splendor, there is little question many others will feel similar love in its warmth.

“Escape Of The Phoenix” Track-listing:

The masters of dark progressive metal offer another demonstration of their unstoppable talent with their twelfth studio album "Escape of the Phoenix." With both light and shadow to define their craft, Evergrey offer yet another timeless sonic adventure for eager fans around the world.