Extinction by industrialization and progression.

One curious tendency that has developed within progressive-tinged power metal circles over the past 10 or so years has been an obsession with dystopian themes. It is definitely a fitting eventuality given the somewhat industrial-tinged keyboard work and more mid-paced, down-tuned grooving character of the music that came along for the ride during the second half of the 2000s lends itself to a dark futurist plotline, but when compared with the more esoteric and nuanced character of earlier material put out by bands like Pagan’s Mind and Anubis Gate it is definitely a departure of sorts. This tendency can largely be traced back to the mid-2000s works of the likes of Outworld, Nightmare and to a lesser extent the short-lived super group Beautiful Sin. Among the current trustees of this sound is Ethernity, a Belgian act that has existed to some extent since the beginning of the millennial power metal wave, but only recently came to prominence with their 2015 sophomore independently released LP Obscure Illusions.

Building upon a solid foundation of chunky, groove and progressive tinged metallic goodness with an eye for nuance and detail, this band’s 3rd offering The Human Race Extinction, true to the band’s stylistic inclinations, presents a futurist technocratic nightmare in an ironically beautiful package. It’s all too familiar themes of humanity losing itself to technological overreach is presented with a highly competent vocal impresario in Julie Colin, who embodies the same sort of grit and grandeur that one would expect out of the likes of Kelly “Sundown” Carpenter and fellow Belgian star Magali Luyten, with maybe an occasional affinity with the more angelic quality of voice here and there that is normally associated with the female voice in a power metal context. This by no means should suggest that the rest of the bands are slouches to even the slightest degree, particularly the handiwork of keyboardist Julien Spruetels and newly recruited lead guitarist Francesco Mattei, who could both pass for Petrucci and Rudess when cutting heads, but Colin all but steals the show every time she approaches the mic.

There is little mystery as to why this band was picked up by AFM Records from a qualitative standpoint, as this album and its predecessor pack a catchy yet highly involved punch, though their similar sonic inclinations to newly acquired label-mates Communic and Epysode make it a fitting outlet as well. Each song presents a highly developed musical picture of a heavily polluted, technologically dependent society like something out of the “Machine City” scenes in The Matrix films, replete with detailing and clanking mechanistic grooves to bring this cybernetic world to life in one’s mind. The active keyboard work and down-tuned, almost djent-like guitar sounds interweave to create something slightly akin to the industrial music that filled out the soundtrack of said film franchise, though the degree of technical musicianship puts this thing on a different level more conducive to someone who wants a bit more Nocturnal Rites and Scar Symmetry to go along with their techno-leaning industrial metal, and in spite of the elaborate formula at play Ethernity proves itself to not be averse to throwing in a needed hook-driven chorus when called for. 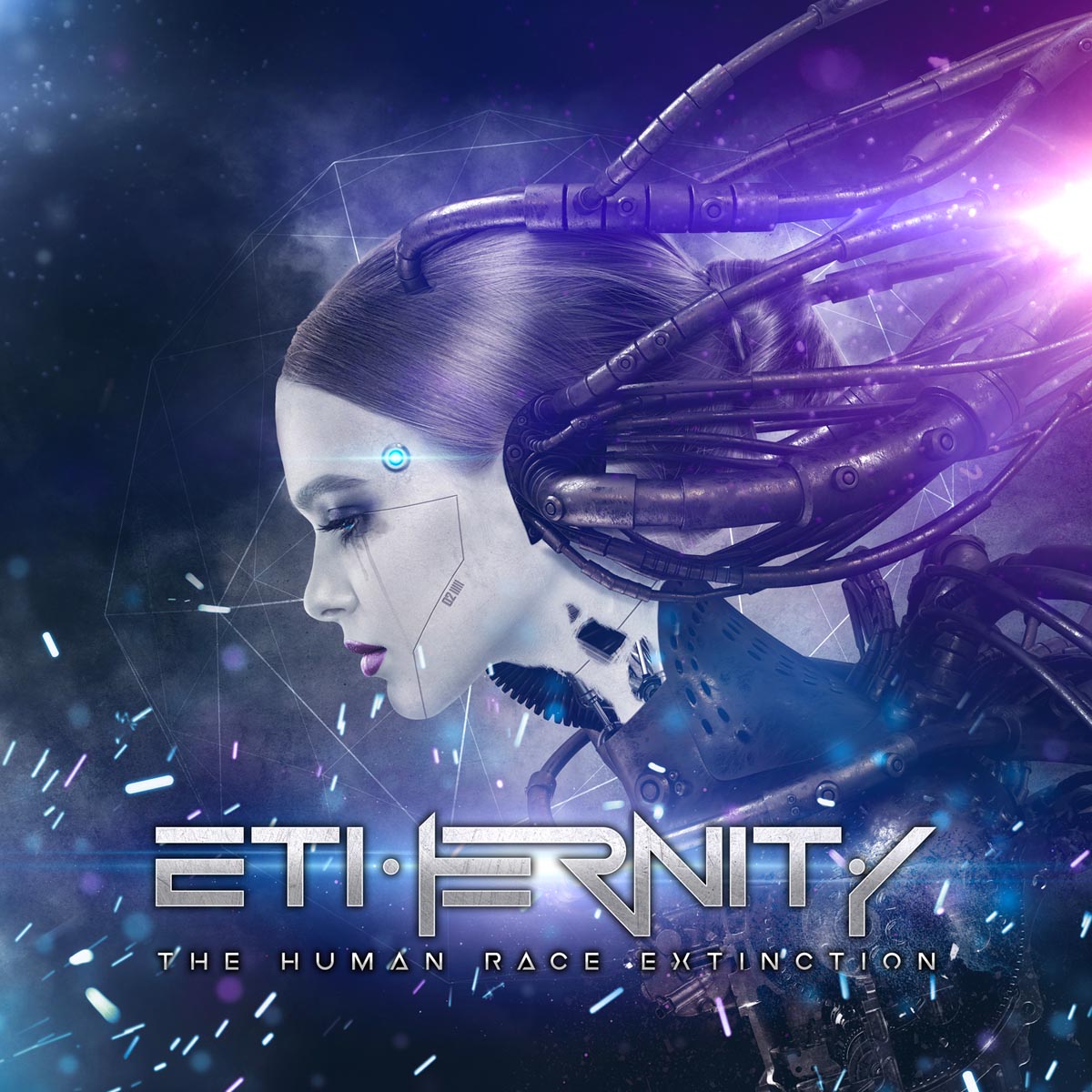 True to power metal form, the picture painted here is accompanied by hints of a cinematic presentation, though they are a bit more subtle than the typical symphonic bombast of the likes of Pyramaze or Manticora. The opening prelude “Initialization” has more a looming ambient character than an outright symphonic bluster, providing a more minimalist seque into the fairly busy and frenetic mixture of technical detailing and stomping heaviness of the title song “The Human Race Extinction”. This general trend of a serene yet threatening quietness followed by a climatic explosion recurs fairly frequently, encompassing the similarly long and involved anthems following the first two in “Mechanical Life” and “Grey Skies”, and reaches a sort of fever pitch during the extended interlude “Mark Of The Enemy” and its Outworld-inspired progressive romp of a follower “The Prototype”. This is naturally just the tip of a highly expansive iceberg that also includes a number of anthems reminiscent of the glorious power/progressive feats of Outworld and Communic such as “Not The End” and “Chaos Architect”.

Given the sheer scope and near overwhelming degree of technical precision that rounds out this 14 songs, 70 minutes long excursion into the elaborate yet inviting world of progressive power metal, it is tempting to throw around terms like magnum opus at this thing and immediately erect it to the same heights as such classics as Waves Of Visual Decay and Andromeda Unchained. It is in keeping with all this that this album is something of a bittersweet endeavor given that just prior to its release date 13 year vocalist and star attraction Julie Colin left the band for personal reasons, bringing the future of this band to question even as it is just starting to break into the big leagues. In a fitting turn of events the 2 vocalists whom Colin most resembles, namely Carpenter and Luyten, have stepped forth to fill in the band’s touring obligations while they begin the monumental task of finding a suitable replacement. It will be a daunting task to find such a voice, but with the metal world still flourishing in Europe, it is not an impossible one, and hopefully it will be a successful one that will yield another fine album in the same league as this one.

The human race meets its end via a combination of progression and industrialization, simultaneously providing a unique twist on the power metal equation and leaving a bittersweet testament to 13 years of effort and toil