We live in times where we can discover new music and artists on a daily (or even hourly) basis, with new bands coming up every day, struggling to gain a spot in the competitive and ruthless world of the music business. For a small and newcomer artist, this is particularly difficult: finding that spark to ignite the curiosity and interest of the metal community is no easy task, and so a band needs to consider an important number of factor if they’re aiming for success, ranging from the correct songs, compositions, packaging, art design, musicians, general proposal and even a proper written press release.

When I was picking my next review, what gathered my attention about this relatively new band Eternal Champion was precisely that: a well written, engaging press release that promised me a good ol’ heavy metal record for fans of the classic “epic” bands from another time, namely Manowar, Manilla Road or Cirith Ungol. They promised us “the highly anticipated new studio album of the greatest new epic heavy metal band!”, and I was hoping to find some good collection of tunes to keep my fist up, my head banging all the way and the melodies to keep resounding in my brain long after the album stopped playing. Well, that was hardly the case.

What we have here is a fun, short record full of catchy, cheesy metal tunes that sounds almost exactly as you might expect, but falls short on the “memorability”, providing a chunk of nice songs that you will hardly remember after. “Ravening Iron” is the second full length album of american band Eternal Champion, following their debut “The Armor of Ire” (2016), and what the listener will get is an interesting follow-up that hits some of the right notes, but leaves you wondering that there’s more potential here that can be achieved at a future release. Something’s missing. 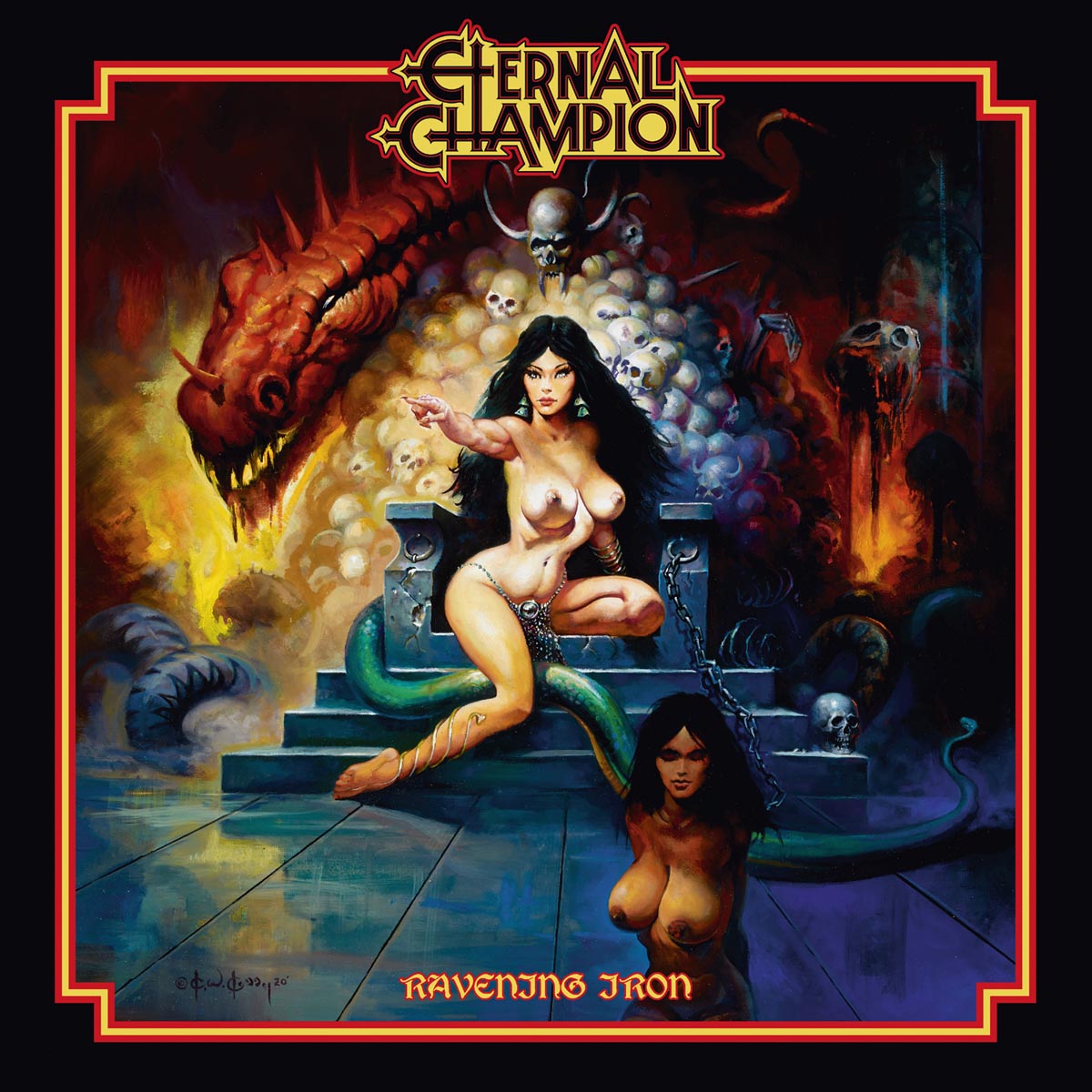 Opener “A Face in the Glare” starts with a nice, crushing riff but slowly turns into a snooze-fest of cheesy proportions, in what we can describe as unused potential, as the song has it all to become a banger but falls very short. A sentiment that can be found throughout the whole album. Follower title track “Ravening Iron” spice things up with an uplifting, up-tempo song full of good metal riffs and hooks, reminding me of strong modern acts that re-enacts the glory days of metal such as Grand Magus, Visigoth or Spirit Adrift. Followers “Skullseeker” and “War at the Edge of the World” provides strong entertaining moments but suffer from the “being heard before” syndrome: we’re only four songs in and we’re already starting to feel tired of the repetitious nature of the album.

At almost six minutes in length, “Coward’s Keep” tends to emulate the epic feeling of a long journey, together with ominous choruses from beyond the grave, with riffs and melodies that keep haunting you until the very end. It’s a strong outing that maybe could benefit with shorter length. “Worms of the Earth” is arguably one of the best songs on the album, fast, dynamic and full of exciting riffs, it’s a testament to the classic days of metal. That follows with “The Goodblade”, which is simply a transitioning atmospheric interlude that ends with “Banners of Arhai”, the closing track. Another mid-tempo tune that sadly falls in the “forgettable” category, which is a shame since the album is ending and the feeling is bittersweet.

I wanted to like this record and I wanted to hear more so they can prove their worth, but at the same time I’m somewhat  glad it’s over and I can move on to more interesting stuff. I think Eternal Champion’s new outing is fun and entertaining in many ways, but mostly will leave you with an indelible “meh” sensation by the time you reached the end.

If you’re a fan of the glory days of heavy metal with an epic twist, Eternal Champion’s new opus maybe right up your alley, full of majestic choruses, crunching riffs and catchy melodies. Just don’t expect to be an album that resonates too much after a couple of listens. It’s an entertaining journey, one that definitely will stay in the hearts of the more nostalgic fans, but unfortunately it’s an album that won’t break any new ground, nor provide memorable moments.