Where the extreme becomes commonplace.

Despite being one of the more popular and arguably iconic figures to come out of the millennial power metal revival, DragonForce shares a somewhat odd relationship with the broader scene. Born out of the twilight of the late 90s intermingling of older melodic metal stylistic trappings with death and black metal that birthed a blackened New Zealand rival to Children Of Bodom dubbed Demoniac, there has always been an implicitly extreme character to their signature sound. However, this sound wasn’t extreme so much for an intermingling of those death/black metal elements that came to define the Finnish melo-death sound of the early 2000s, but more so for being an exaggerated expression of power metal’s Helloween roots. This was a band that did things similarly to the likes of Gamma Ray, Stratovarius and Hammerfall, they simply did it faster and fancier, achieving a niche similar to what Michael Angelo Batio’s famed late 80s band Nitro brought to heavy metal within a power metal context, complete with a similarly auspicious virtuoso axe-man in Herman Li to launch an already cartoonish sound into the proverbial stratosphere.

Over the years this outfit has garnered its fair share of criticism and praise, with the likes of Kai Hansen hailing them as standard-bearers for the scene at their height in popularity during the Guitar Hero craze, and a number of purists within the field dismissing them as a parody of the style. In all fairness, their earlier period with South African vocalist ZP Theart at the helm was generally defined by the elongated guitar solo battles of Herman Li and chief songwriter Sam Totman, alongside an increasingly quirky synth-obsessed sound courtesy of keyboardist Vadim Pruzhanov that blurred the lines between metal and old school video game soundtracks and song lengths that rarely came in under the six minute mark. Though they never really abandoned this exaggerated stylistic niche, the exodus of Theart and entry of current vocalist Marc Hudson, coinciding with the onset of the current decade no less, ushered in a more restrained version of this band where accessible songwriting shares an equal footing with the wild technical extravaganzas and break-neck tempos. It is into this context that their eight album and fourth under this new paradigm, dubbed “Extreme Power Metal” (their style’s namesake no less), finds itself.

In contrast to the varied, occasionally genre-defying 2017 opus of this fold in “Reaching Into Infinity”, this album is a bit more in line with what most come to expect from the DragonForce brand. Much of this owes to the fact that principle songwriter Sam Totman penned most of the music and bassist and more eclectic songwriter Frederic Leclercq moved back into a secondary songwriter role, providing some needed contrast to Totman’s driving, sing-along romps rather than dominating the fray. Instead, what occurs here is an almost perfect amalgam of the measured pomp of “The Power Within” and the campy exploits of “Maximum Overload”, showcasing the highflying adventurism that this band has largely clung to with some occasional hints of their older days thrown in for added effect. Particularly on longer cruisers reminiscent of the mid-2000s incarnation of the band like “Highway To Oblivion” and “Cosmic Power Of The Infinite Shred Machine”, the usual blend of syrupy melodic goodness and raging speed metal riffing finds Totman and Li up to their old tricks in the solo department, venturing dangerously close to the good old days of “Inhuman Rampage”. 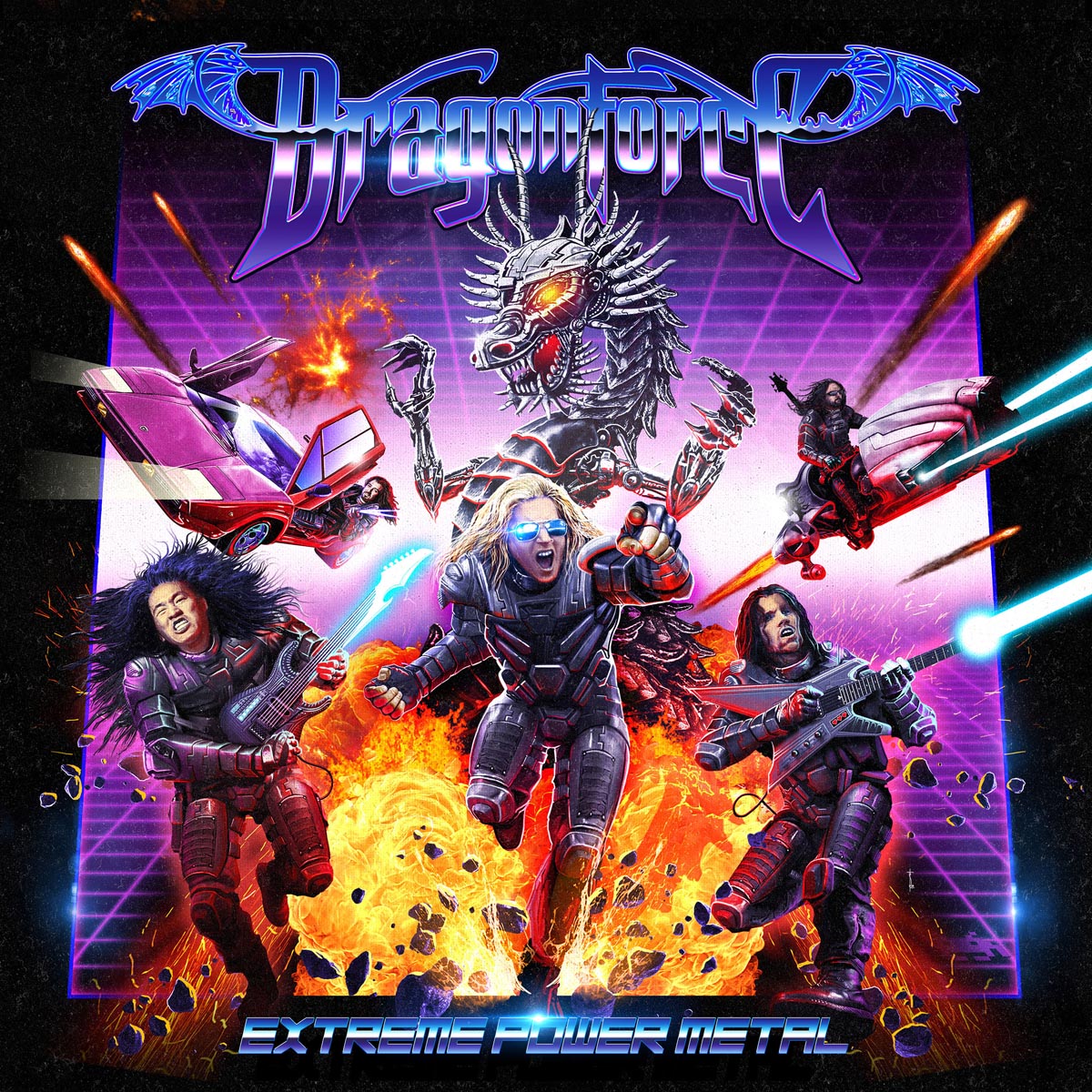 The dividing lines between songwriters is arguably the only thing more pronounced than the collective return to form found on here, and it provides for a very engaging listen with plenty of staying power. Leclercq showcases his greater affinity with older heavy metal with a couple of more mid-paced and symmetrically structured anthems in “Heart Demolition” and “Strangers” that, nevertheless, rival Totman’s contributions in the choral bombast department, whereas the high-octane melodic explosion “In A Skyforged Dream” could almost pass for a Totman offering save that it’s a bit more thrashing and punchy. The real standout offering of the bunch, however, is the collaboration of Totman with session keyboardist Coen Janssen (of Epica fame) dubbed “The Last Dragonborn”, a Japanese-music inspired crushing groove machine and epic offering that could almost pass for a Kamelot song were Hudson not handling vocals and the lead guitar work was toned down a bit. Arguably the only song on here that battles with the aforementioned one for prominence is the “My Heart Will Go On” cover, which has a certain novel charm to it in all its high speed, video-game infused campiness that essentially reprises what they did with Johnny Cash’s “Ring Of Fire” five years ago.

Having existed in one form or another for the past 20 years, it’s been a rather unique run for this Pan-Anglo and sometimes French and Eastern European outfit, and the recent exodus of long time bassist and frequent compositional contributor Frederic Leclercq has found this band closing yet another in a series of ongoing eras. It’s been something of an ongoing ironic situation for him, given his more expressed interest in metal genres apart from power metal despite being a prominent figure in said style both with this outfit and the equally apt if somewhat less prolific French band Heavenly, but his recent recruitment by Teutonic thrash legends Kreator seems a fitting outcome for him, and the future will no doubt find DragonForce with a new bassist and a renewed vigor for the studio. It’s been a fun ride thus far, and there are little signs of slowing down as the dawn of a new decade looms. Will it be an age of extreme power metal heroes? Undoubtedly if Sam Totman and company have anything to say on the matter.

1. Highway to Oblivion
2. Cosmic Power of the Infinite Shred Machine
3. The Last Dragonborn
4. Heart Demolition
5. Troopers of the Stars
6. Razorblade Meltdown
7. Strangers
8. In a Skyforged Dream
9. Remembrance Day
10. My Heart Will Go On

Undaunted by a revolving door of secondary and primary players and 20 years of pushing the power metal envelope, Britain’s best known export in said sub-genre offers yet another example of their version of a measured, well-rounded opus at warp speed