Although naturally no two bands are exactly the same, there are really few bands quite like 80s metal phenomenon Dokken. Even though they never had the thrash factor to hang with the likes of Judas Priest and Megadeth, they were also adequately edgy, snarly, and let’s face it, musical, to be a cut above the usual L.A. glam scene. After all, lead guitar sensation George Lynch was not just nicknamed “Mister Scary” for his custom guitar modeled after bony human remains. He was a ferociously blistering presence and intimidated every other player on the scene. According to his eventual successor and later Dokken alumnus Reb Beach, “Lynch was always cool. His sound was on fire, he looked like a scary Indian and his name was Lynch.” In the years from 1983’s debut album, Breaking the Chains, to the larger-than-life album Back for the Attack in 1987, the band named for singer and frontman Don Dokken became a special sanctuary for the Goldilocks metalheads seeking something not too heavy, not too cute… something just right. However, what arguably topped the feat of 1987’s Attack album was its subsequent tour, and the resulting live masterpiece: 1988’s Beast from the East. Recorded at the very biggest shows of the Japanese leg of the tour, the band was captured in its prime, with an incredible setlist, and tight performance from all. Don’s lead vocals were powerful, filled with equal parts of grit and tasteful vibrato. The rhythm department was held down by Jeff Pilson on bass and “Wild” Mick Brown on drums. Of course, the icing on the cake could be found in the form of George Lynch, with possibly the best guitar playing of his entire career, and some of the best melodic shred to ever come out of the west coast scene. As a snapshot in time, few bands could hope for a better moment than Dokken in 1988.

However, as is often the story in music, the band’s personalities grew large as quickly as they grew apart. The core band disintegrated soon thereafter. For twenty plus years, it essentially functioned as Don Dokken solo project, with occasional appearances by Mick Brown, with Lynch and Pilson presumably missing in action, never to return. This changed in a major way in 2016, with world-shaking news for lifelong Dokken aficionados: the original core band would reunite for a very small set of live shows in Japan and South Dakota. Yes; Brown, Pilson, Lynch and Dokken back together for one hell of a special event. Of course, a major motivation behind such an event would be the production of CD’s and DVD’s of the historic moment. The only question left: how was it?

For the purposes of this review, I listened to the CD first without so much as a look at the live video. The CD comes out of its corner with gloves up and ready for battle. The first track is actually a brand-new studio song entitled “It’s Another Day,” featuring all four core members of the band. The mix is solid, and the song has a unique character, where it feels like 1980s Dokken, supercharged with a variety of “wicked sensations” while being tempered with new millennium sensibilities. The drumming is tight, the bass is solid and well-mixed, and George is as good as ever, complete with a hair-raising solo worthy of any Dokken record. Dokken’s lead vocals, while not what they used to be, are surprisingly strong. One may reasonably infer that if one’s vocal range has been affected by time and hard living, a brand-new song would be an ideal place to write vocal melodies that are tailored specifically for that new vocal range. If Don is writing the new material to cater to his contemporary capabilities, it works well for the new studio track. The disc then wastes no momentum in hurtling directly from the bold new track, into a live recording of “Kiss of Death.” The set list which follows is very much an homage to the original Beast from the East, but let’s reserve the visual critique of the set and performance for later. It does bear mention that the sound quality of the live CD is good; better than the original 1988 recording, in fact. In some ways, it is an odd juxtaposition; a band no longer in its prime enjoying cutting edge live recording technology. If only one could send 2016 microphones and digital recording solutions back to pivotal shows of the 70s and 80s. 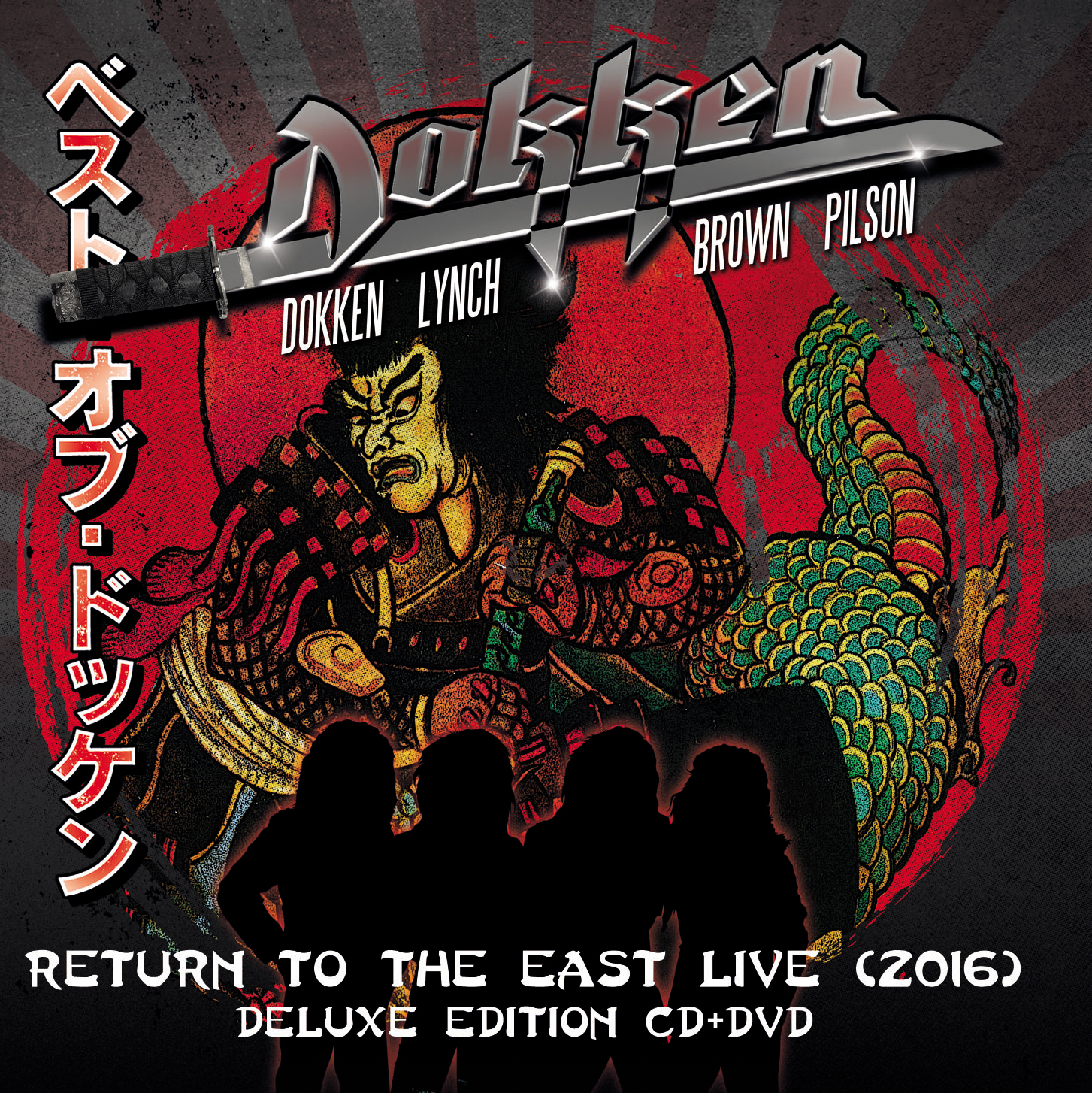 Surprisingly, the highest point of the entire release comes in the form of two acoustic re-recordings of legacy Dokken tunes: namely, “Heaven Sent” and “Will the Sun Rise.” The mix is on “Heaven” is just, well, heavenly. Pilson’s bass may be the big warm foundation upon which the whole song is recorded. I enjoyed the album on Mackie powered monitors, and the bass guitar parts just meander with a big smoothness, paving the way for some crisp and tasteful hand percussion, jangling tambourine, and Lynch’s tasteful guitar playing with just a bit of Texas dirt. We may never know if Don put down his vocal tracks in one take or one hundred, but at the end of the day, the proof is in the pudding, and the final polished track is one creamy portion. Frankly, this semi-unplugged version is actually better than the original track from Attack, and that is no small amount of praise. “Will the Sun Rise” enjoys the same level of quality, although the song does not translate quite as well as “Heaven” did. Make no mistake, it is still a great track with some lovely vocal harmonies, but it suffers the fate of being upstaged by the preceding track. Even without fully factoring the live portion of the CD, the disc is a worthwhile purchase for the serious Dokken fan, even if just for the three fresh studio recordings.

This brings us to the DVD and the live set in general, which applies to both CD and DVD. The “good” column includes the aforementioned live recording quality, and a fan-friendly setlist. Getting into the “less good” column, one is invariably faced with the elephant in the room: the vocals of Don Dokken. While he has recovered significantly since his vocal chord surgery a few years prior, he is unfortunately a pale imitation of his former self. While he may have been able to tailor the melodies of the new song to his capabilities, there exists no such refuge in the legacy Dokken catalog. The days when he brought “Kiss of Death” to a crescendo by screaming “Death” two full octaves higher… well, those days do not extend to 2016. Now, the delivery of songs is fairly flat, rarely leaving his “safe” octave, and not holding notes as in the golden age of Dokken. While it is not William Shatner musical poetry hour, it is barely singing in the ideal sense. Thankfully, back over in the “good” column, his bandmates backing vocals are as solid as ever, and often times they are doing the heavy lifting and going to the places where Don no longer can. While no one will ever know how real the chemistry of the reunited band was, it is refreshing to see the original graduating class of Dokken come together to attempt to pull off a good sound, even when one man is not at his best.

The video quality is good from a perspective of clarity and picture. However, the directing leaves a bit to be desired. Often the shots are somewhat hyperactive, and never seem to be where a fan would want to be looking. George is doing furious two-hand tapping, and suddenly the viewer is looking at Pilson’s quarter notes, or the back of Don’s jacket. Don is singing a pivotal part of a song, and one is treated to Mick’s gloves. Unfortunately, this leads to a significant concern of the disc. There are a large number of moments in the show where Don has clearly moved away from the mic, and his mouth is closed, and yet one hears the tail end of some vocal vibrato or embellishment. Frequently, the audio, most often with Don’s vocals, does not match what is on the screen. While it is entirely possible that there is occasional swapping of audio from Japanese and South Dakota shows to present “ideal” audio, to the discerning fan, it may give an unsettling Milli Vanilli vibe, which is the last thing the band needs with all the attention on Dokken’s diminished vocals.

The CD may be a good purchase for serious fans, primarily because of the new studio tracks, but what about the DVD / Blu-Ray? This one may be a “no.” Sadly, although it is heartwarming to see the old lineup do it one last time, it remains bittersweet. Even aside from Don’s vocals, no one brings the 1988 “A” game to the show. Even George’s respectably solid leads are only about eighty percent of what they were thirty years ago. The strange directing, odd camera work, and questionable application of Don’s vocal audio all add up to an awkward viewing experience. Essentially, the verdict is this: a serious Dokken collector should have this video. It is an essential moment in the history of the band, and should be seen, for better or for worse. However, to the more casual Dokken fan, who has not been heavily engaged since the departure of Lynch and Pilson, it may be better to leave the good memories intact, and listen to Beast from the East to hear the band in their finest hour. As for the band, it is hard to imagine where to go from here. While tenacity and perseverance are admirable, one of the advantages of the band’s advancing age is wisdom: perhaps the wisdom to know when it is in the best interest of the band and the fans to end on a high note, even if only metaphorically.

Although certainly a noble effort, this reunion set asks the question: “If this is as good as Dokken can possibly sound, what does the future hold?” The concert itself is not bad at all, especially the CD with the bonus studio recordings. Collectors will want it in the library. However, the show is such a far cry from Beast from the East that it leaves the listener with a poignant sadness. During the song “Breaking the Chains,” Don Dokken shares the following advice with the crowd: “If you don’t want to sing at a rock concert, you probably shouldn’t be here.” Agreed, Don. It is certainly wisdom worth considering.