More often than not, we find ourselves naturally skeptical of any musical act where only one (or even zero) of the founding members remain in the band. It’s a bit like replacing every part of a guitar, save the tuning pegs, and calling it the same instrument. Thankfully, human beings are unique and not quite so plug-n-play as car parts, gun parts, guitar parts, etc. You change one out, and the finished product will be different. Change them all out? Well, that would be the case of Italy’s Prog-Metal virtuosic DGM, retaining exactly zero of its members from its 1994 origin. However, thankfully unlike many acts who have swapped out all the moving parts after the achievement of substantial commercial and critical success, and no longer resemble the glory days, DGM’s current lineup is the glory days. Since the Basile-Mularoni era circa 2007, the band has solidified into a tight, intelligent-yet-ear-pleasing force deserving of much reckoning. Invoking elements of many within their contemporary cohort, from Seventh Wonder to Evergrey to Symphony X, in fact featuring appearances by Tom Englund, “Sir” Russell Allen, and Michael Romeo, DGM have been dependably producing top-shelf records since the dawn of the current band’s “Mark III” lineup. While the release of 2016’s “The Passage” impressed us mightily, what really primed our collective pump for a new album was guitarist-producer Simone Mularoni’s Sweet Oblivion, a 2019 collaboration with the industry’s favorite talented pain-in-the-ass Geoff Tate. Despite Tate’s best efforts to be a turd in the proverbial recording studio punchbowl, Mularoni’s professionalism and exceptional writing not only saved the project, but made it just about the best Tate-related thing to happen since “Mindcrime.”

And so it came to be that in one of our final gifts from the year 2020 is not a plague of locusts or a Stay-Puft™ Marshmallow Man, but the new DGM album entitled “Tragic Separation.” The record is brought to us by the same lineup as the last few albums, but with a driven fury we were not expecting. In fact, the opening track, “Flesh and Blood,” could have easily opened Symphony X’s “Odyssey” album. It’s currently the flagship music video on YouTube for the album; it is a bold choice, being a nigh-eight-minute track packed with proggy shred goodies, but the melodic chorus structure is enough to make it accessible. Ish. As much as anything jammed with two-hand tapping and relentless metal drumming can be. Mularoni is certainly less DeGarmo and more Romeo on this release, but holy cow does he ever know how to fuse furious shred with tasteful melodic execution. His soaring notes, begun upon false pinch harmonics and bent into the creamy stratosphere are just exquisite. Casali’s keys not only drive the song, but offer exciting and contemporary counter-balance to Mularoni’s guitar parts. After Basile’s powerful vocals, and the overall instrumental excellence of the band, by the conclusion of the first track we look like a Vince McMahon reaction meme. The song is just wow.

It’s always a risky move, opening with such an overwhelming salvo, leaving the rest of the album feeling “less,” but DGM delivers a steady rising-and-falling action for the remainder of the record, with no single moment feeling like a disappointment. The second track, “Surrender,” actually is fairly accessible, more like upbeat major key AOR melodic rock, but it’s a catchy and enjoyable song, so even though it’s a radical departure from the opening track, it’s just so goddamned good that the listener never really even notices. It’s some very smooth clutch-in and clutch-out shifting by the band. The third song, “Fate,” walks the line nicely, fusing tight metal with melodic sensibilities with all the dexterity of Eclipse or One Desire. The song “Hope,” while perhaps lacking some of the chops or hooks of its companions on the album, remains adequately strong and interesting to usher us forward on the album without feeling that “OK I am bored with this” urge to hit the skip button.

This is just as well, because our palate is nicely cleansed to receive the titular “Tragic Separation,” with lovely piano playing, and gorgeous violin from the land of Stradivarius. The song construction is just stunning, at least on par with the writing we came to adore on “Sweet Oblivion.” Bloody hell, we wouldn’t mind more writing like this on the most recent Dream Theater album. The guitars are literally music to the ears, and the chorus is like candy. On Yelp we said “10 out of 10, would listen again.” 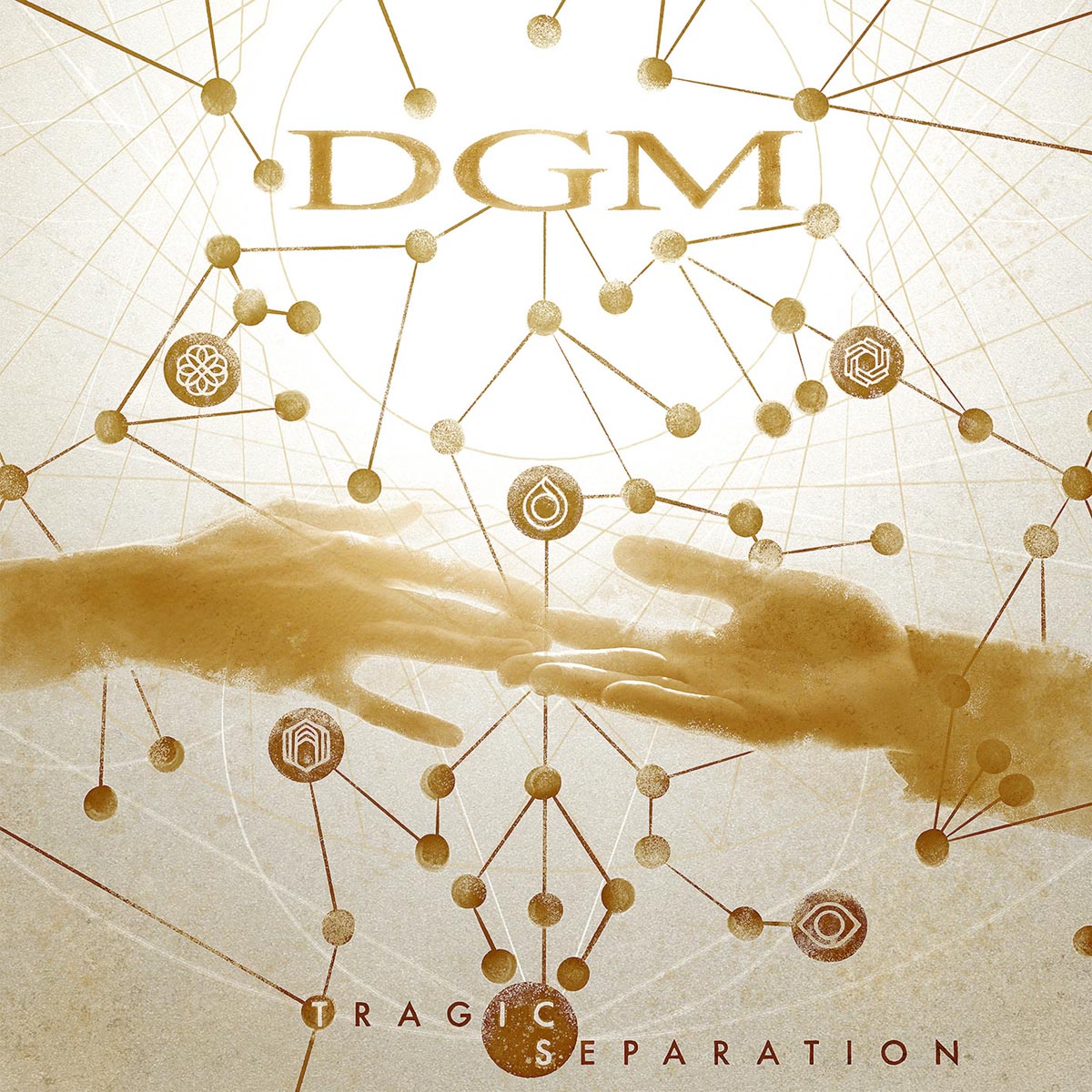 Just in case you get the munchies for some technical prowess again, “Stranded” has your back with a finger-lickin’ bucket of crunchy guitar tearing it up over top of a proficient rhythm section. The overall song construction is good, but damn, the slamming drums backing up some masterful guitar and keys in the middle make for a potent recipe. In the interest of brevity, the final four tracks round things out nicely; “Land of Sorrow” with its driving beat and essential prog metal sensibilities, along with the not very “Silent,” and its tasteful heaviness balanced with melody. The driving power metal of “Turn Back Time,” and the final “Curtain,” from its delicate chords, ticking clock, and artsy ambience.

2020 has been a mixed bag for music, like it has for most everything else. “Tragic Separation” by DGM is firmly in the “good things” category; in fact, it’s in the great things category. Does it reinvent the wheel, or count as man’s best invention since fire? No, but it’s more like you order food and it’s a really really good dish, or you buy some practical thing off Amazon and it performs exactly as advertised, perhaps even just a bit better than expected. That’s “Tragic Separation.” We expected a solid prog metal album, but we got all that and then some. It’s like the melodic happiness of much of the Frontiers catalog, combined with the instrumental and compositional fury of something like Michael Romeo’s new solo record. It’s just solid from beginning to end, and a good time all around. The mix and production are great, the songwriting is superb, and the keys and guitars of Signori Mularoni and Casali are backed flawlessly by the bass of Andrea Arcangeli and the drums of Fabio Costantino. Marco Basile delivers outstanding vocal performance from beginning to end, with his usual versatility and great metal timbre. This is just a really great Euro prog metal album, and we cannot recommend it more. Look for it this Friday October 9th.

Our favorite Prog-Metal paisanos have done it once again, with an exceptional DGM record sure to be an instant classic. While this album is accessible to most any power or prog metalhead, fans of Kamelot, Seventh Wonder, Symphony X, Magnus Karlsson, and Evergrey can consider this album to be required listening. This album is easily equal to DGM’s already impressive “Passage” album, and is not to be missed.