Our regular readers will recall that we were recently impressed by the latest offering of Lords of Black due largely to the incredible vocal performance delivered by frontman Ronnie Romero. As it turns out, Ronnie has been keeping busy; in fact, he provides the lyrical muscle behind a second 2018 release, namely, the new Destinia effort entitled Metal Souls.

Destinia is a Japanese power metal act, although really only Japanese by virtue of being the project of lead guitar wunderkind Nozomu Wakai (or Wakai Nozomu if you prefer your Japanese surnames first). 2014 saw a first foray into the metal scene with the album Requiem for a Scream, most notably fronted by Bob Rock (of Impelliteri fame, not the producer of Metallica fame). The 2014 record was a noble effort, featuring Bob Rock’s often Racer X delivery, and some very sweet riffs and chops. However, if history has a lesson to offer the world of rock recording, it is that sometimes it is the second or third attempt that perfects the formula and puts the artist on the map; see also examples ranging from Number of the Beast to Master of Puppets to Images and Words. Nonetheless, in going back to the drawing board, what has Nozomu-san formulated?

In reality, Nozomu-san didn’t just come loaded for bear; he was packing a Samurai Odachi in his kimono. The new album, Metal Souls, not only features Rainbow and Lords of Black juggernaut Ronnie Romero, but also proven metal fixtures Tommy Aldridge and Marco Mendoza, both featuring resumes spanning everything from Rhoads-era Ozzy to Blue Murder to Whitesnake. Calling this lineup an assembly of ringers would be an understatement. It is more like the Springfield softball team of C. Montgomery Burns. Darryl Strawberry and all.

In some ways, this action-packed album is hard to pigeonhole as something as narrow as “power metal,” and certainly not “Japanese,” with whatever that may entail. If one did not know the nexus of the band to be one Nozomu Wakai, the sound of the record would make the listener wonder if the “who’s who” of the golden age of British and California metal didn’t get together to write something that captures the best of snarly western high-energy metal.

When we were examining Lords of Black, it came up that Ronnie Romero missed his calling as a primetime Yngwie vocalist, calling upon the talents found in everyone from Boals to Soto to Turner to Vescera to Leven. That is true again this time, and in spades. On this record, this is like someone took that turbo-Romero sound, pumped it full of racing fuel, and injected it into one of the very best Firewind albums. Is it unfair to the work to say that it would only be half as good without Romero? Perhaps, but perhaps not. Imagine Van Halen I without Roth, or Appetite without Axl. They are amazing because of a fortuitous conjunction of heavenly talents, and that happened here as well. Nozomu was lucky to have Romero on this record, but you know who the real winner is? It’s you, the listener. 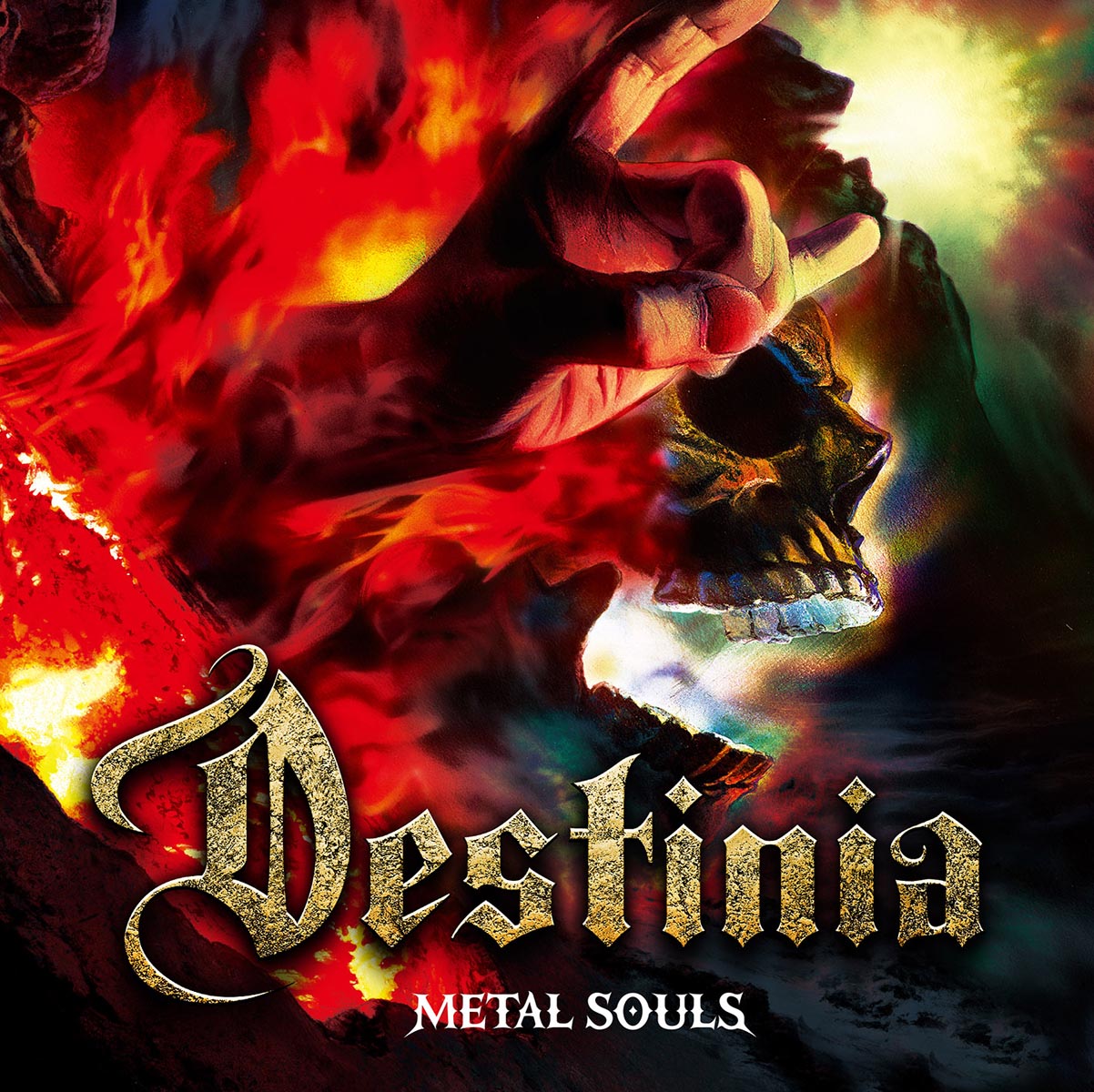 The album wastes no time in getting down to business. Within 3 literal seconds, the ears are under stereo attack by Nozomu right-hand riffage and the full fury of Romero’s brilliant vocals. The titular first track is equal parts Firewind “Allegiance” and Primal Fear “Delivering the Black”, with just a brilliant taste of catchy pop melody. Naturally, in the tradition of Blackmorean acts where the guitar player is the nexus but not the name of the band, the album features guitar heavily, and from what we can hear, that is a very good thing. The first track unloads with a powerful solo, with the legato, hammers, pulling, tapping, and harmonics to be the real deal, delivering shred equal with most any of the Gods of the Eighties.

The second track “Rain”reaches even deeper into Rainbow roots, with verse structure that could easily be Bonnet-era Rainbow or even early Whitesnake, Nozomu alternating picking techniques and all. Romero’s vocals are melodic, soaring, and marry well with Wakai’s guiding lead playing. In terms of composition, it’s a poppy quasi-ballad with some proto-metal underpinnings, but that’s fine. We like that, and we know you probably do too. It’s okay, you can admit it. We’re all friends here. The third track “The End of Love” is a good one. Nay, great. It is pumped full of energy, and Romero is doing his very best audition for a 90s Malmsteen album. The riffage is relentless, and the chorus is just so good. The chorus is the stuff of movie montages, if the montage required learning how to surf across the galaxy on a steel pterodactyl while strafing aliens with a gatling laser. None of this was a misprint; feel free to read that again.

There are not enough good things to say about the fourth offering, “Promised Land.” For some reason, the Sabaton keyboards just make this whole thing even more epic. The structure is cool, the tempo is headbanging, and the leads are slick, but somehow Ronnie sounds like the other Ronnie. Yes, that Ronnie. It has to be heard to be believed.

If saccharine-sweet ballads are your bag, the fifth song comes through with “Take Me Home.” It could drop right into a Reb Beach-era Whitesnake album and no one would bat an eyelash, with the exception that the vocals are amazing. In fact, we already have two alumni here from the era after “Sykesnake,” and they pull this song off like they have been playing Whitesnake professionally for years, mostly because they have. Nozomu just dials his crunchy Marshall back to about a 6 on the gain knob and goes into blues rock mode, and it all actually works out pretty well. If we still lived in an age friendly to good music getting radio play, this song would be a top contender for accessibility.

As the name hints, “Raise Your Fist” is about getting back into the action. The overall melody of the song is right out of the Book of Dio. It truly does “stand up and shout.” But that’s okay, sometimes we just want to rock. It doesn’t need to be flashy or complicated, nor does it need to be about wizards, castles, tigers, and rainbows, although that formula never seemed to hurt Blackmore and Ronnie.

The album continues, imploring the listener to “Be a Hero.” It tempts being called filler, but it still has a solid beat, lead guitar, and stellar vocal parts. The call to heroism vibe does have its novelty appeal, calling upon the Daniel-sans of the world to learn Karate and try not to get the leg swept, but the album met its montage quota with the third track, “The End of Love.” However, the judges will award points for approximating Jon Lord’s Highway Star in a guitar solo.

“Metamorphosis” is a pretty cool rocker, bringing back the Euro-Sabaton power metal keyboards and vibe. However, the chorus doesn’t quite manage to hook the listener the way some of the other tracks do. There are some nice demonstrations of lead guitar wizardry, but the song as a whole is fairly take-it or leave-it. “Cross the Line”, the ninth track of the album, falls into a similar category. The melodies and vocal parts are not the most memorable, but the guitar parts are commendable. The song is nothing about which to write home, but it does provide four minutes of quality headbanging that may have otherwise been wasted on something less important like work or minding traffic.

The tenth track, “Judgment Day,” launches in with rhythm playing reminiscent of the Scary One George Lynch, and occasionally dips into techniques that would do honor to Jake E. Lee. Romero does what he can (which is a lot) with the otherwise modestly interesting vocal parts, but the song structure remains chunky and aggressive, especially the break in the middle of the song.

The album ends with “Ready for Rock,” which by its name seems more like a song for starting an album. Hopefully if the band tours, they will consider “Ready for Rock” as a high-energy starter. The song is most welcome. Although the album rocks all the way through, it feels like Rocky trying to go the distance for the last few songs, but this song is where he really stands up to Creed for all the marbles. While not the best track on the album, it has good verses, a solid memorable chorus, and some A+ guitar playing. It makes for a strong end to an equally strong album.

This album fills an interesting niche. It is heavier than the acts it has its roots in, and yet is more catchy and melodic that most modern metal. It’s like someone taught Blackmore to play like Gus G, or, to paraphrase Blackmore, someone taught Dio to sing like Freddie Mercury. It is well-balanced and well-mixed, and there is not a bad song to be found. This little gem hits the real and virtual record store shelves on Friday the 13th of July. No matter how unfortunate your Friday the 13th, pick up this album. That way it has at least something awesome in it. Check out the pre-orders at this location.

This album is really a pleasant surprise. It is like the amazing hole-in-the-wall restaurant you just found and you can’t get over how good it is. If you like the melodic 80s rock like Rainbow, Dio, Ozzy, Dokken, Whitesnake, or if you enjoy heavier contemporary melodic metal like Voodoo Circle, Primal Fear, Firewind, or Sabaton, you will find yourself digging this instant classic