For many of us, it seems like it was yesterday that Twisted Sister decided to hang up their boots, but it’s been almost two years now. Since then, their hard-working lead singer Dee Snider has released his third solo album, “We Are the Ones”, and has another one in the oven, due for release on July 27th.

Entitled “For the Love of Metal”, Dee’s new release was produced by Hatebreed vocalist Jamey Jasta, and features contributions from Howard Jones (ex-Killswitch Engage), Mark Morton (Lamb Of God), Alissa White-Gluz (Arch Enemy), Joel Grind and Nick Bellmore (Toxic Holocaust) and Charlie Bellmore (Kingdom Of Sorrow). As was the case in his previous effort “We Are the Ones”, the mission statement of the new album was to bring a contemporary and “current-sounding” collection of songs to fruition, and on that criteria, it more than delivers, with and an extra dose of weight added this time around. The end result, while not falling particulary close to Twisted Sister’s tree, is a full-on anthemic metal album indulging in modern heaviness without neglecting Snider‘s roots. I dare say that it even has elements of some of Dee’s other endeavors, such as Widowmaker and Desperado.

Throughout his career, Dee has certainly spread his seeds and has engaged not only in music but also in a multitude of activities, such as being part of a reality show, directing horror movies, hosting radio shows and narrating VH1 specials. He worked hard to reach the point he is now, where there’s freedom to choose which path to pursuit. At 63 years old, it’s hard to believe he’s still angry at something, but he surely summoned all the frustration of the early years of Twisted Sister in this album. Then again, can you not be worried and upset with the state of things in North America these days? The frantic double bass of album opener “Lies Are a Business” certainly won’t leave you wondering what this song is about, and as the title indicates, this anthemic track is filled with political undertones. Dee’s voice soars high in the chorus, and the crispy production highlights the heaviness of the riffs here. The follower “Tomorrow’s No Concern” threads a similar territory, with Snider expanding the gritty side of his vocals a bit further, addressing his legacy with Twisted Sister and declaring himself free to pursue new objectives. “I Am The Hurricane” flirts with the modern-metal territory, while also including some bluesy moments.

One minor quibble I could mention is that the lyrics of songs such as “American Made”, “Roll over You” and others seem too cheesy or “macho man’s metal” at times, with a certain naïveté that really doesn’t seem like a good fit for a 63-year-old millionaire. On the other hand, Dee proves to be a true artist on those songs, owning those lyrics as if he was a young mobster who penned them himself. 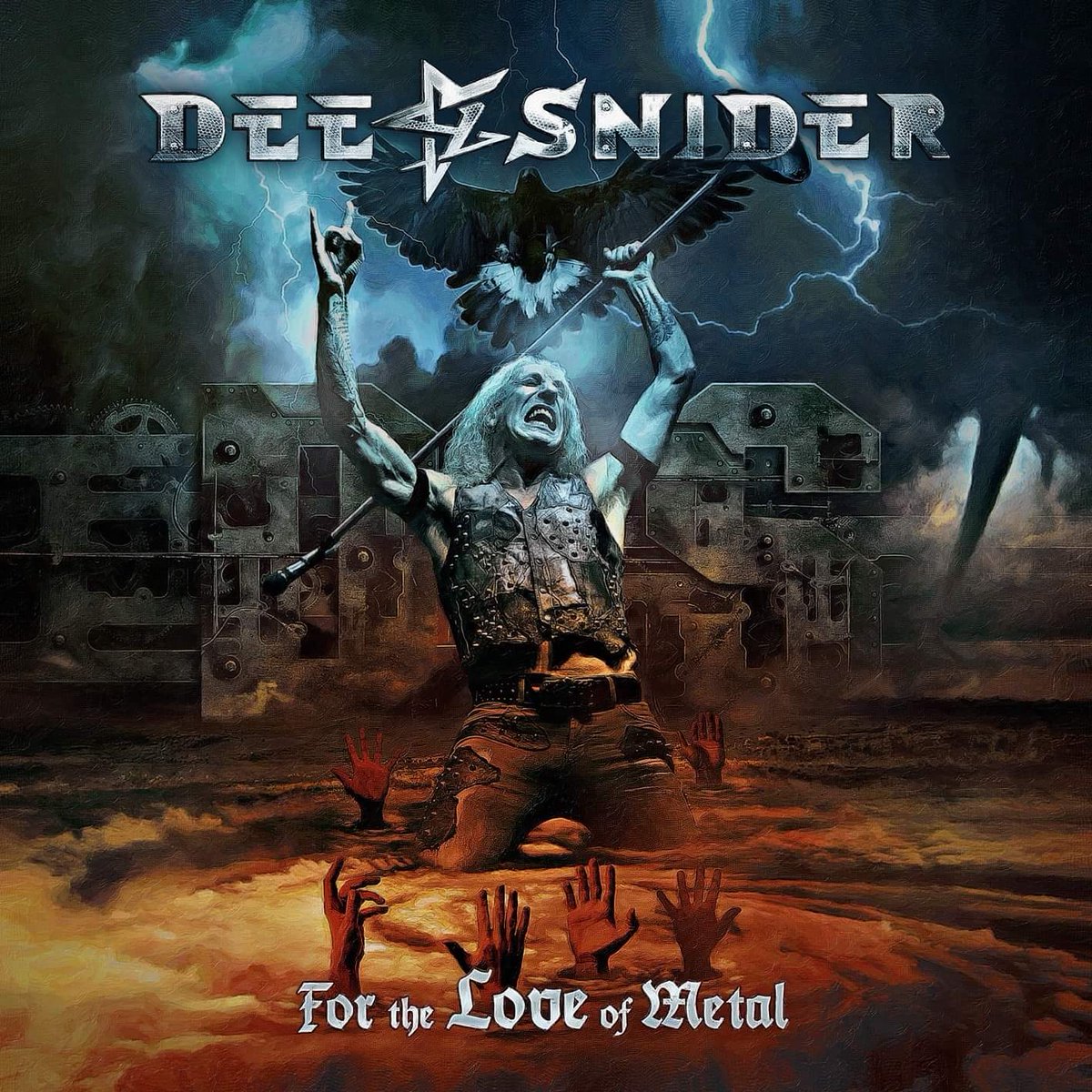 “For The Love Of Metal”Album Artwork

Things get a bit more personal on “I’m Ready”, where Dee sings about his mother, who passed away during the recording of the album. I would expect that such a personal song about loss would be a ballad, but this is a heavy track with twin guitar harmonies and blistering solos. I can’t imagine what feelings went through Snider’s head as he belted the words “Death brings us sorrow no one can heal, love brings us memory no one can steal”.

“Become the Storm” has a chorus that begs to be sung on a giant-sized stadium and ferocious guitar solos, and was wisely chosen to be the first single off the album. And when “Dead Hearts (Love Thy Enemy)” kicks in, I had to check twice to see if that song wasn’t added to the playlist by mistake, because it starts with an acoustic guitar and violin, and Alissa White-Gluz’ clean vocals. This is the only song that could be called a ballad and goes into a crescendo with Alissa providing a welcome contrast to Dee’s vocals. The title track ends the proceedings with a Slayer-like riff, prominent bass lines and lyrics that refer to classic metal songs such as Twisted Sister’s “Under the Blade”, Dio’s “Last in Line”, Judas Priest’s “Victim of Changes”, or Motörhead’s “Born to Raise Hell”. On this album, Snider proclaims his artistic freedom and his right to explore new grounds, and 2018 sees his career taking an adventurous, relevant and certainly heavy path. His influence has been somewhat overlooked through the years – maybe it was the makeup or the somewhat erratic nature of Twisted Sister’s output – but his legacy is certainly worthy of praise as much as Dio’s or Halford’s.

“For the Love of Metal” Track-Listing:

The words “modern” and “metal” don’t always go together all too well, but in the case of “For the Love of Metal”, Dee Snider seems to have found a good balance between the two. The mix favors his voice tremendously, whilst allowing the guitars to sound heavy and not overproduced. The influence of Jamey Jasta can surely be perceived, without overriding Dee’s intent and artistic freedom. If you’re looking for crispy guitars, double bass drumming, and anthemic vocals, this is your album for 2018.