It’s a dilemma that doesn’t pop up often but when it does, it can be vexing: How to distinguish between a musical “duo”, an ever-changing “project” or a full “band”? In the case of Days Between Stations there does seem to be a sense of identity crisis, especially on their third album which features three lead singers, a bassist and a drummer – none of whom are officially members of the band. Rather, Days Between Stations is categorized as a “partnership” between guitarist Sepand Samzadeh and keyboardist Oscar Fuentes, who bring in special guests to augment their sound depending on what the song calls for. On the face of it, there may not be a problem here – it’s just semantics, right? However, the drastically ever-changing nature of the membership of the band…er, partnership…is also reflected in their ever-changing sound: releasing their mostly-instrumental debut in 2007 with an ambient and cinematic approach, their 2013 followup then brought in a slew of top-tier guests – including singers – for a proggier approach. Now, third album “Giants” goes even more heavily towards the classic prog sound of the 70s, though running such a gamut of styles that it can make the listener take pause and wonder just how to approach such a diverse collection of songs. Fortunately, the bottom line is that this is very impressive music, which in some ways defies category or even the details of who is performing it.

Ironically, the most consistent element here is Billy Sherwood who again, it must be stated, is not officially a member of the band. Nonetheless, his hand runs prominently throughout the recording as he covers the roles of bassist, drummer, producer, co-writer/arranger and the most utilized vocalist. Only occasionally, however, does the material fall into the vibe of one of his own projects like Circa:, most notably on “The Common Thread” which he solely wrote. Still, most of the songs he sings on do exude somewhat of a Yes feel to them, not the least of which is due to Sherwood’s thunderous Squire-inspired bass tone and playing. Samzadeh and Fuentes seem to be taking Yes as a writing/jamming influence on several of this album’s tracks, with Samzadeh’s soaring guitar occasionally approaching Howe-like heights. (Sidebar: their previous album featured some of original Yes guitarist Peter Bank’s final recordings before he passed away) If Yes’ next studio album sounds half this inspired and energized, fans will be fortunate.

Of the seven songs on the album, four feature Sherwood’s vocals and the more prominent classic 70s prog vibe. The title track “Giants” is surely the most epic, beginning with a beautiful piano piece which develops into a glorious centerpiece of the album. It boasts strong vocal lines, choruses with Sherwood’s signature multiple-tracked vocals and several sections where Samzadeh’s playing is on fire along with Fuentes’ layered keyboards providing the right balance of lead and support, eventually culminating in a glorious final section that is a classic prog fan’s dream. So impressive is this piece that it would have benefited being the leadoff track or closing track to mark its significance. “Another Day” also is a strong contender for the best Sherwood-sung piece, being the most focused of the lot with a satisfying repeating vocal line of “I alone must…” as Sherwood recounts the belabored mythological Sisyphus. Again Samzadeh shines, this time with transcendent contributions on slide guitar. Fuentes is masterful on supporting keys, and Sherwood’s bass perfectly hits the low-end with a tone to die for. Top notch material. Album opener “Spark” is even more ambitious and shows the band at their creative edge, nearly about to careen off the precipice. There’s plenty to digest here, perhaps too much for an album opener between its slew of sections, moods and outright jams (there must be a kitchen sink lying somewhere in there). An especially hypnotic section towards the end is spellbinding with Sherwood’s sustained bass notes rooting the piece as guitar and vocal lines entwine overhead. The performance is undeniably strong, highlighting the strengths once again of guitar, bass and keys. 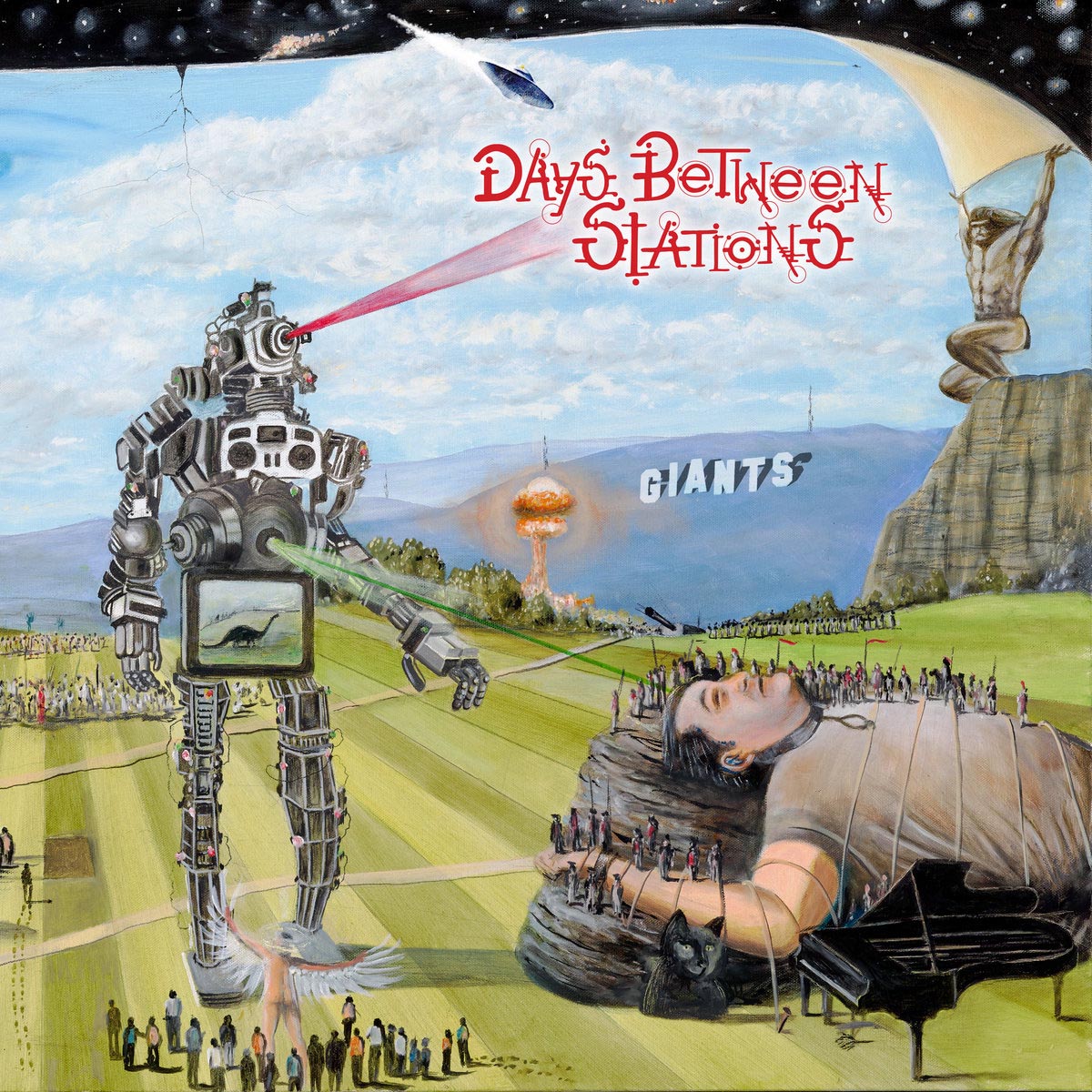 If the case is being made for this album being a modern classic in the vein of 70’s prog “giants”, the other three songs somewhat moot that argument. Which isn’t so much of a problem because each one is a wonderful, unique song in and of itself. Emphasis on “unique”. Durga McBroom offers beautiful vocals on “Witness the end of the World”, a lovely ballad with symphonic backing and Sherwood’s ever-moving bass lines. Colin Moulding provides his own flavor of ecstasy with “Goes by Gravity” in which Days Between Stations have created an ideal hit single, perfectly suiting Moulding’s distinctive vocal approach. Finally, the short instrumental “The Gathering” is absolutely lovely, beginning with a swooning piano section from Fuentes and later segueing into pastoral acoustic guitar, eventually merging the two together.

All of these strengths combine to make a very impressive album but the only problem is the one alluded to at the start of this review. So disparate is the output that there is a certain level of dissonance having them all merged together on one album. What do prog epics have to do with a beautiful McBroom ballad and a seemingly-lost XTC classic? Not much, really, other than authorship. Even the pastoral instrumental feels somewhat alien to the Circa:-style “The Common Thread” which follows it. Some of this could have perhaps been mitigated to some degree with a different running order, but ultimately it’s just up to the listener to shrug and say, “Well, it’s all great music, so therefore it’s all good.” There is certain charm to a band that defines “their sound”, but Days Between Stations isn’t going to deliver in that regard. However, in terms of writing and performing creative, diverse, intricate music, this is a band not to be missed.

In regards to Sherwood’s influence, it does loom a little large in the proceedings. His bass playing is clearly the ace which serves this album (which is saying quite a lot, considering Tony Levin was the featured bassist on their last album) and overall his vocals fare well, though inevitably swaying the vibe a little too strongly towards the sound of his other projects. Production-wise they took a live studio approach with a slight room reverb that adds to a looser, spontaneous feeling that the band were probably going for but may not always have been the best pick. Although Sherwood is no slouch on the drumkit, that is the one area where hiring a tighter more precise player could have elevated this album to an even higher status. It’s easy to imagine Sherwood had a great time at the kit on a tune like the title track, but his enthusiasm on knocking down giants with his tom hits wears a little thin after a time, and a more nuanced yet powerful drummer may have better served. Despite these observations, there is no question that Days Between Stations has taken a giant leap in their development. This new album has set the bar several rungs higher and it will be interesting to see where they go from here.

On their third album Days Between Stations takes a ‘giant’ leap in their evolution, delivering an impressive level of musicianship and composition that is sure to please classic 70s prog lovers. While not consistent in their style of music, the quality is continuously high throughout, bolstered by musical guests Billy Sherwood, Colin Moulding and Durga McBroom. Along with cover art by Paul Whitehead, it’s an unexpected treat for the autumn season, highly recommended.