Two years and a half ago I hadn’t heard neither of Dave Kerzner’s name nor about his music. When I jumped onboard Cruise to the Edge on November 2015 I already knew about his at-the-time only solo record “New World” (and I even had the album) but that was pretty much it. His band was scheduled to play at The Spinnaker Lounge, and we decided to swing by and form an opinion straight from their live show. That was a day of “discovery”, which is a term I’m sure any avid music fan can relate to. They offered a great performance, with his long-time partner in crime Fernando Perdomo stealing part of the show with a unique and theatrical guitar-fest. The moment I disembarked I began digging to get wind on Dave Kerzner’s endeavors, and to my surprise I found he had been living in Miami for quite some time, where his studio is now located. Not only has he flown under my radar, he had also been my neighbor and I was completely unaware. I felt dumbfounded.

Dave’s musical resume is nothing short of impressive: a multi-instrumentalist, composer, producer ad engineer of high repute, he co-founded the award-winning progressive rock group Sound Of Contact with Simon Collins and co-wrote/co-produced their acclaimed 2013 album “Dimensionaut”; has worked with Steven Wilson on his album “Grace For Drowning”, Steve Hackett on his “Genesis Revisited 2”, Heather Findlay (Mostly Autumn) on Mantra Vega’s “Illusion’s Reckoning”, Randy McStine on Lo-Fi Resistance “Chalk Lines”, Joe Lynn Turner on “The Sessions”, Simon & Phil Collins on “The Big Bang”, Billy Sherwood and Jon Anderson of Yes, Alan Parsons and many others. Dave’s background includes playing with Kevin Gilbert’s Thud in the 90s; he performed “The Lamb Lies down on Broadway” with Giraffe at Progfest ’94 and toured with Shankar on Peter Gabriel’s 1993 WOMAD festival. Back in 1996, he founded the sound development company Sonic Reality which has provided sound design for popular keyboard manufacturers, and software instruments for some of the biggest names in music.

Fast forward to the present time, and Dave is now a friend, and a musician I have in high regard. I’ve seen his band playing numerous times: RoSfest 2016, Palmetto Baystock Music and Seafood Festival 2016, and Cruise to the Edge 2017 are one of them; I have stumbled upon him at local venues when attending musical performances of other bands, and my photographs have been featured in the booklets of his live releases. Dave’s sophomore album “Static” has just been released digitally and the physical CD version will be available mid-October. I have been listening to it for some days now (he was gracious enough to send me a copy); and I decided to write this review. Regardless of my friendship with him, I strive for this article to give you a completely unbiased opinion about “Static” so you can decide whether the album is worth your time and money or not. 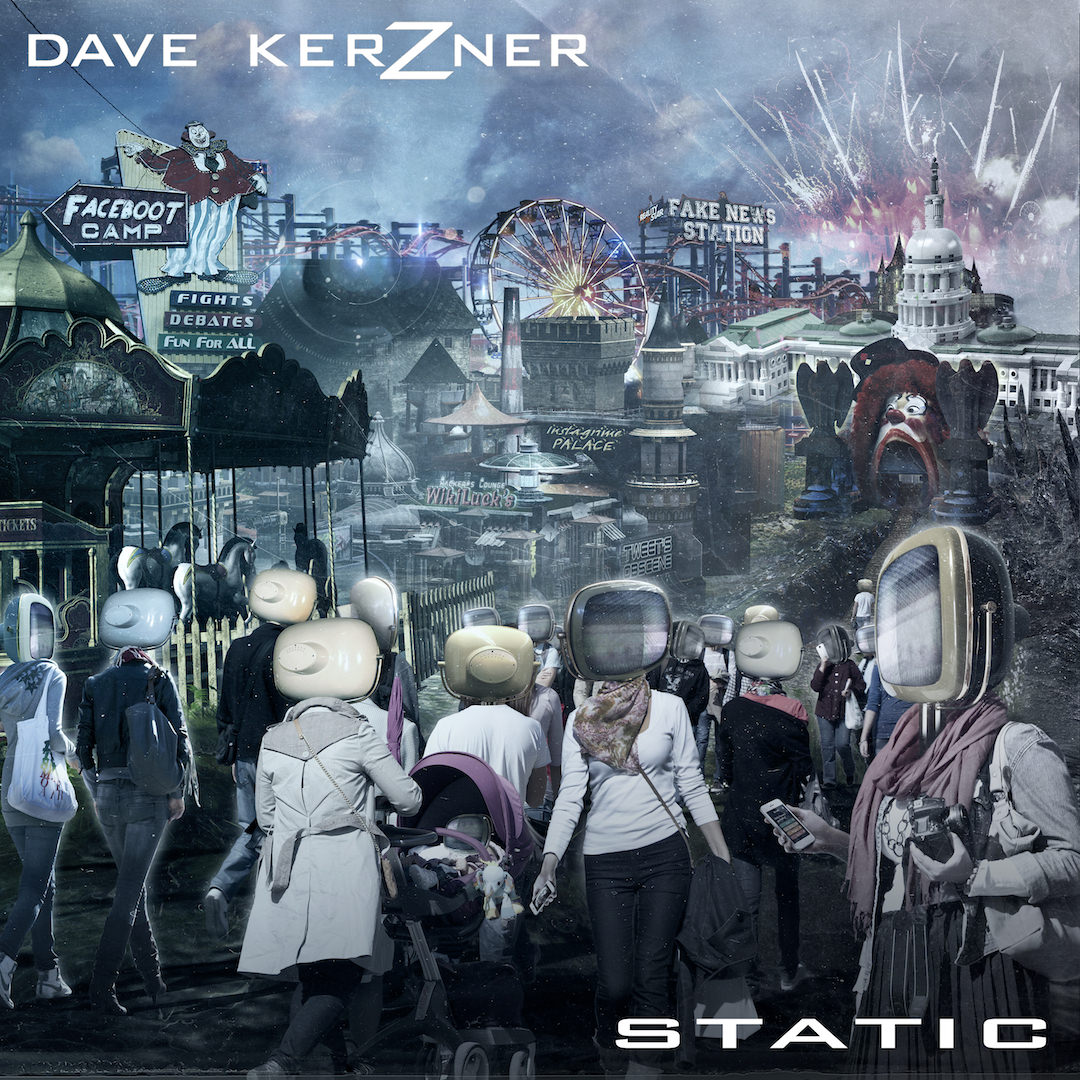 “Static” has been defined by Dave himself as “A progressive rock concept album and a rock opera about the distractions, chaos and clutter in everyday life and about navigating past this static interference in our heads toward clarity and happiness”. The album features Dave on vocals, keyboards and guitars and he is joined by top musicians, many of which have collaborated with Dave for the “New World” and “New World Live” albums. This includes the omnipresent Fernando Perdomo on guitars, bass and some drums, Randy McStine on guitars and FX, Derek Cintron on drums, and Durga and Lorelei McBroom on backing vocals. The list of guest musicians is otherworldly: Steve Hackett, Alex Cromarty (Mostly Autumn), Stuart Fletcher (Sea Horses), Colin Edwin (Porcupine Tree), Nick D’Virgilio (The Fringe, Spock’s Beard, Big Big Train), Matt Dorsey (Sound of Contact), Ruti Celli, even Nick Mason (Pink Floyd) appears via some drums tracks recorded by Alan Parsons for Dave’s company Sonic Reality.

The first words that come to mind when trying to define “Static” are eclectic and monumental. “Static” doesn’t simply follow its predecessor “New World”, neither thematically nor musically speaking, it simply goes in a much darker and intense direction, one I could even label as sometimes aggressive. It is a concept album, with a common theme of exploration of various social and psychological states of being, and many flavors of rock are mixed in dramatic twists and turns: you are taken from dark moods to uplifting atmospheric pieces, from rich nostalgic sounds to modern alternative rock edges, from ominous and melancholic passages to poppy prog tunes.

The album kicks off with a short instrumental aptly titled “Prelude” which after mere 39 seconds gives way to the energetic “Hypocrites”, a groovy and pulsating song dominated by a gritty guitar riff, one that grabs the jugular right from the first note. The tune evolves exponentially from there, with Dave Gilmour-laden vocals wrapping the mood-altering everchanging melodies. The exquisite keyboards increase the percolating atmosphere, paired with Cintron’s pleasing and time-defiant drumming, and elevated by the additional vocals layers of McStine and Dorsey. The bombastic vortex builds into a cinematic kaleidoscope of sounds and effects that reach the final over an exquisite and high-flying solo, to later descend into a keys and drum driven slow finale.

The album title “Static” comes immediately, bringing a complete change of pace in the form of a soft and gentle piano-dominated ballad. If I play this track for you without telling you where it comes from, you could easily say it is a Pink Floyd tune. Gently gliding along from the outset, the melody is sublime, and yet so simple, well-constructed and smoothly delivered that it becomes instantaneously addictive. “Reckless” is next, and it clearly shows how many influences are meshed into the creative process of the record. It begins with some pure alternative guitar chords and builds from there over a lazy groove with a bit of Zeppelin influence, a mix of moody, and an almost funky/80s clamor adorned by vocals samples that remind me of Queensrÿche’s “Empire”. There is a mid-section where keys and drums alternate the spotlight’s pyrotechnics and then the song returns to the same initial structure and fades away slowly.

“Chain Reaction” follows, bringing a retro pop-infused sound, some sort of progressive mash-up between Radiohead, Queen and The Beatles. It somewhat reminds me of Perdomo’s solo works, with its upbeat main melody and a vintage, catchy and irreverent chorus. “Trust” comes in with an atmospheric intro on piano and keys and is the first track reminiscent of Kerzner’s first album “New World”. There’s a classic late 70’s Pink Floyd vibe to it which flows from one section to another, a gorgeous tune built over a melodic piano line, with a beautiful and restrained guitar solo that serves the song quite nicely and showcases Perdomo’s ability of never overdo his guitar parts. The album continues its journey over a myriad of soundscapes: nostalgic synth solos, choppy instrumentals, booming crescendos, rollicking organ runs, polyphonic drum fills and slick bass works abound in the next 8 tracks (Yes, you read well, this is a mammoth opus clocking on 75 minutes long) a journey I encourage you to take instead of me trying to ineffectively describe it.

Two other outstanding songs very worth mentioning are “Dirty Soap Box”, a full-blown progressive and hooky tune with a slashing rhythm (probably one of my favorites of the album) sporting a venturous and soaring solo by Mr. Steve Hackett and Nick D’Virgilio’s precise trademark drumming, and the closing song “The Carnival of Modern Life”, which is also the customary prog-epic at 17 minutes long lyrically divided into 5 parts. A chameleonic track plentiful of changes, is way more diverse and complex than anyone can describe using words. From its opening drenched in moody psychedelia to the cinematic middle sections, passing through elaborated choruses and charming keyboard episodes, exploring a breeze of slicing sounds and shifting harmonies whilst bringing back the recurring initial riff of “Hypocrites” the song is a truly lavish piece of music, one that closes with a grandiose ending permeated with brilliant and beautiful guitars full of drama and contrast, while the verses “Break down, look at yourself” creep slowly from the background to later die into some static noise.

With extremely meaningful lyrics, a first-class production, stellar musicianship from all the musicians involved (Perdomo, McStine and Cintron are particularly stunning throughout the whole record), and a gorgeous artwork courtesy of well-known artist Ed Unitsky, Dave has created a massive piece of psychedelic prog-rock with “Static”. For many it will take repeated listens to fully appreciate the complete magnitude of the album, as it somehow favors a gloomier ambiance, hence lacking the directness and pop-sensibilities of “New World”, but make no mistake, “Static” is a multifaceted beast. Is it a better album? No, is simply a different one, one that feels more like a truly collaborative effort, with a definite lively band feel mixed with Dave’s introspective creative vision as a solo artist. Merging elements of a twisted Broadway musical with familiar vintage rock flavors like that of King Crimson’s “Red” or Genesis’ “The Lamb Lies Down on Broadway”, “Static” is Dave Kerzner’s most opulent and ambitious work to date and undoubtedly will serve to cement his position as one of the most creative artists in the progressive rock spectrum of his time.