If you ever get lost in the sea of “crystal” acts (Crystal Eyes, Crystal Tears, Crystal Viper, Crystal Ball, Crystal Castle, Crystal Lake, Crystal Sword….need I go on? Ok then: Crystal Dreams, Crystal Fate, Crystal Abyss, Crystal Crow, Crystal Pyramid, Crystal Sky), just remember – there can be only one true crystal master! Crystal Eyes has released consistently great albums for 20 years now, aging gracefully. For those unfamiliar to the band, imagine a tour of every single traditional metal, power and hard rock sub-genre executed to perfection with ‘crystal’ clarity. If that sounds amazing, then “Starbourne Traveler” is the album for you.

After a six year hiatus between 2008’s “Chained” and 2014’s “Killer,” Crystal Eyes returns after five years to renew the love of all things traditional. “Killer” would be tough to beat, having been one of the finest albums issued in 2014, but band leader/founder Mikael Dahl has been on a mission since returning to full time vocal duties. The album’s first single “Side By Side” had listeners believing that Crystal Eyes could very well write a perfect Running Wild song (probably better than any recent Running Wild song for that matter), but “Starbourne Traveler” is not so one sided. In fact, every song is a journey that ranges from traditional metal, speed metal, power metal, hard rock and straight up rock. It represents a tour of everything that made early metal great, absent the thin over trebled production of the era.

Though a brand new release, “Starbourne Traveler” also features a couple of classics re-recorded: “Extreme Paranoia” (one of your author’s favorites) and “Rage on the Sea,” both having originally appeared on the 1997 demo “The Final Sign,” as well as the stunning debut album “World of Black and Silver.” Both of the re-recordings retain the classic feel of the originals, with the benefit of far superior production and performance with new guitarist Jonatan Hallberg (having joined in 2017) and drummer Henrik Birgersson (having joined in 2016), joining guitarist/vocalist Dahl and long time bassist Claes Wikander. Dahl hits that trademark scream at the end of “Extreme Paranoia” as if he hadn’t aged a day. 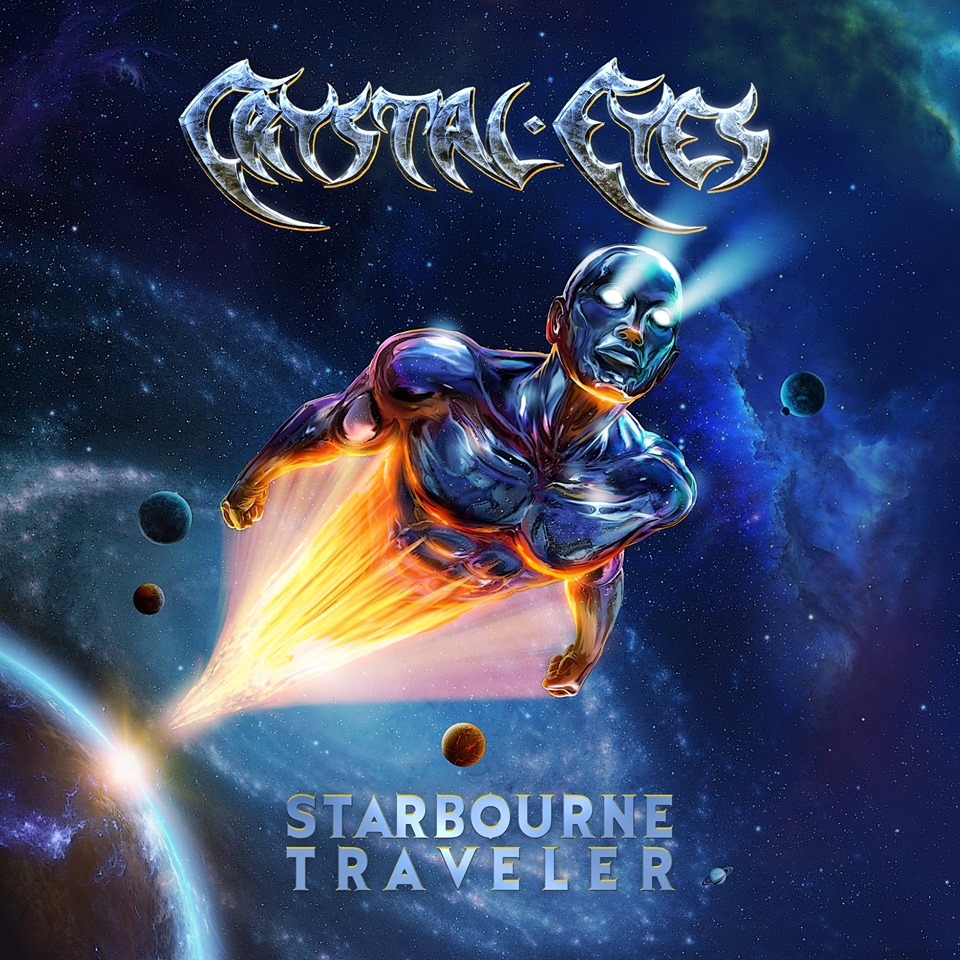 The real pleasure gained from “Starbourne Traveler” is in the breadth of its variety. If you love traditional melodic styles of metal and rock, there is something for everyone. The real achievement on the record is that although each song can easily recall well known influential acts, it is tastefully written, executed flawlessly and is uniquely Crystal Eyes. Whether its that solid Running Wild base with “Side By Side” (and “Rage on the Sea“), the mid-80’s Accept meets 2000’s U.D.O. vibe on “Paradise Powerlord,” the Iron Maiden twin guitar melody meets Judas Priest speed on “Gods of Disorder,” the Gamma Ray fused with the stadium anthems of Eclipse on “Starbourne Traveler,” or where old Autograph blends with the “Hero on Video” style Freedom Call on “Midnight Radio,” it all so familiar, yet still fresh and exciting. It is a masterful ode to old school songwriting without coming across like a rip off.

This collection of songs has an uncanny ability to evoke a barrage of random feelings derived from fleeting recollections from childhood, those bursts of emotions felt in when getting my first taste of Iron Maiden (“Aces High“), or getting blown away by the overwhelming power of Judas Priest‘s “Freewheel Burning,” or the pure excitement and joy of seeing Dee Snider pop out of a manhole on stage when first seeing Twisted Sister at age 16, or the day I pushed play on the cassette deck for a first pass of Running Wild‘s “Under Jolly Roger.” Any release that has the ability to draw out that much emotion from such random memories is pure genius.

“Starbourne Traveler” brings all the power, emotion, passion and pride that made up all the fundamental reasons why I chose metal as a music and a mindset. Crystal Eyes is a ceaseless and remorseless ode to everything great from the past. With top notch modern production, the band proves that old school is ageless. As the listener will hear Mikael Dahl belt out in the opening track “Gods of Disorder“: “take me back…to the time…when the metal invasion ran the ground…” If everything I heard as a child was true (“metal is a fad”), then how do you explain 34 years of fandom with no end in sight?

Crystal Eyes managed to perfectly capture the spirit, power and memories of old school traditional metal, hard rock, power metal and rock all in one without sounding like a rip off. If you think this is the only time they managed this feat, then check out the back catalog. If you grew up in the 80's and have a boat load of very simple cherished memories and emotions of that time, "Starbourne Traveler" will draw them out like a moth to a flame on this brilliantly fun album.