Whenever CORROSION OF CONFORMITY releases a new album, people take notice. It’s been a dozen years since CORROSION OF CONFORMITY recorded new material with vocalist/guitarist Pepper Keenan at the helm. In that time, there have been rumors, whispers, and outright allegations that the legendary Southern rock outfit would reunite to blow the doors off the whole damn scene again. In 2014, after nearly a straight decade traversing the globe as a guitarist with New Orleans supergroup Down, Keenan reconnected with the core CORROSION OF CONFORMITY trio of Woody Weatherman, Mike Dean, and Reed Mullin to hit the road hard. “Reed called me and mentioned maybe playing a couple shows,” Keenan recalls. “I said, ‘Let’s just go to Europe and see if it works. So, we went to Europe and then ended up going back four times in one year… We toured for a year and then started tracking about ten or eleven months ago.”

And now, the long wait is over. CORROSION OF CONFORMITY returns with “No Cross No Crown” — an album that somehow sounds as if no time has passed between 2005’s In The Arms Of God and today. Recorded in North Carolina with longtime producer John Custer, CORROSION OF CONFORMITY cut No Cross No Crown in about forty days over the course of a year. From the first listening is evident that the group’s musical direction was motivated by recapturing the sound of their earlier work, particularly ‘Deliverance’ and ‘Wiseblood’ – imagine if you could listen to doom, punk, stoner, and mad blues jamming all at the same time and you’ll get an idea of how “No Cross No Crown” sounds like.

Beefy Southern up-tempo rocker stompers sporting the C.O.C. characteristic distorted and sludgier guitars like “The Luddite” and “Forgive Me” are intermingled with melancholic guitar interludes sprinkled with psychedelia like “Old Disaster,” “Matre’s Diem,” and “Sacred Isolation” — something they have been known for since ‘Deliverance’. The songs have crunch, catch, grime, and immediateness, with Pepper Keenan signature vocals sounding better than ever. The music rocks, grooves and takes you through atmospheric passages with an undercurrent of southern gothic catchiness and rolling riff-monsters, all of them soaked into a sometimes spacier, sometimes old school hard-rock vibe. The signature sound of Keenan and Weatherman’s rhythm-heavy dual guitar machine is back in full-force, with plenty of Black Sabbath and Thin Lizzy influences mixed into their own in-your-face southern-metal grimace. They don’t go for the ultrafast shredding, instead the focus is on trepidating, catchy and memorable riffs, interspersed with some bluesy guitar solos. 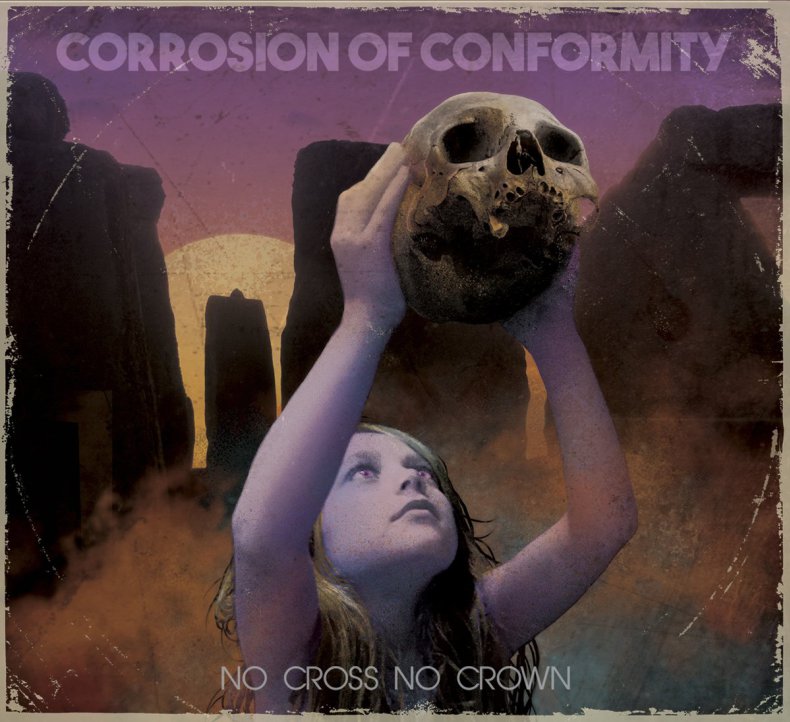 “No Cross No Crown” Album Cover

This record is a Molotov cocktail of styles ready to take on the system and fight authority, and clearly shows how C.O.C. are able to evolve with time and still remains firmly ingrained in their sonic pedigrees. Many will analyze, scrutinize and hold it up for comparison with previous efforts, yet “No Cross No Crown” is an irrefutable proof of C.O.C.’s ability to deliver a rejuvenated sound without trying to manipulated or plagiarize themselves. While for many CORROSION OF CONFORMITY fans out there it’ll fell like a trip back in time to 1997 – when the sinister vocals and memorable groove of “Drowning In A Daydream” had taken the radio airwaves by storm – ultimately  “No Cross No Crown” suceeds in further cementing C.O.C. as a band capable to close the gap of time and craft anew a beyond solid, organic, and uttered record which masterfully fuses old school metal elements and the more atmospheric heaviness that came with hard rock in the 90’s. I really doubt we’ll see a better comeback in 2018. Highly recommended.

No Cross No Crown will be released via Nuclear Blast Entertainment worldwide on January 12th, 2018 on CD, digital, vinyl, and cassette formats. Various preorder bundles are currently available at this location. CORROSION OF CONFORMITY will join BLACK LABEL SOCIETY tonight for a mammoth North American live takeover. The tour begins in Denver, Colorado and will wind its way through nearly four dozen cities, the journey coming to a close February 27th, 2018. Additional support will be provided by Eyehategod and Red Fang on select shows. You can check out the confirmed dates here.

Corrosion Of Conformity is:

“No Cross No Crown” tracklist: