During the height of the pandemic caused by the coronavirus known as Covid-19, governments around the world called lockdowns and distinguished between essential and non-essential activities to determine which of them could still occur. The music industry was classified as non-essential since it is mainly considered to be an entertainment product. However, not acknowledging Chaosbay and their newest album “Asylum” as essential is a big mistake.

Five years ago, a refugee crisis broke out in Europe. It consisted of millions of people running away from armed conflicts ongoing at their home countries. The vast majority of them came from countries located in the Middle East and Africa, such as Syria, Afghanistan, Iraq, and Somalia. Due to their desperate attempt to reach Europe, thousands of people died when migrant vessels sank in the Mediterranean Sea. Such crisis is widely considered to be the most disastrous migratory crisis that occurred since World War II.

The described events had a significant impact on Jan Listing, guitarist and mastermind of Chaosbay. He was shocked by the reluctant, defensive, and fearful way these refugees were greeted and how they were condemned to ostracism. The moral implications derived from those events and how non-refugees responded at the situation were the main elements that inspired the creation of “Asylum”, a masterful conceptual album that should cement Chaosbay as one of most promising modern progressive metal exponents.

“Asylum” does not only have a significant concept behind it. The music is equally magnificent. After listening to this album, is easy to tell that these are highly capable musicians. Their awe-inspiring musical skills are not to be doubted. However, that is not their most valuable asset. As strange as it may seem, their ability to contain the display of their musical prowess is what makes them so attractive. They prioritize substance over form. With their new record, Chaosbay intends to express something through music, not to showcase their musical technique.

The result is an exceptional blend of several musical directions that keeps the record fresh and captivating. Every song is unique while still providing cohesiveness to the development of the album. Expect djent, superb guitar solos, brutality, intricate musicianship, catchy melodies, recurring themes, ethereal soundscapes, and even pop passages. Jan’s voice switches between soft, melodic, and pleasant approach to piercing and furious growls that highlights refugees’ catastrophic misfortunes. 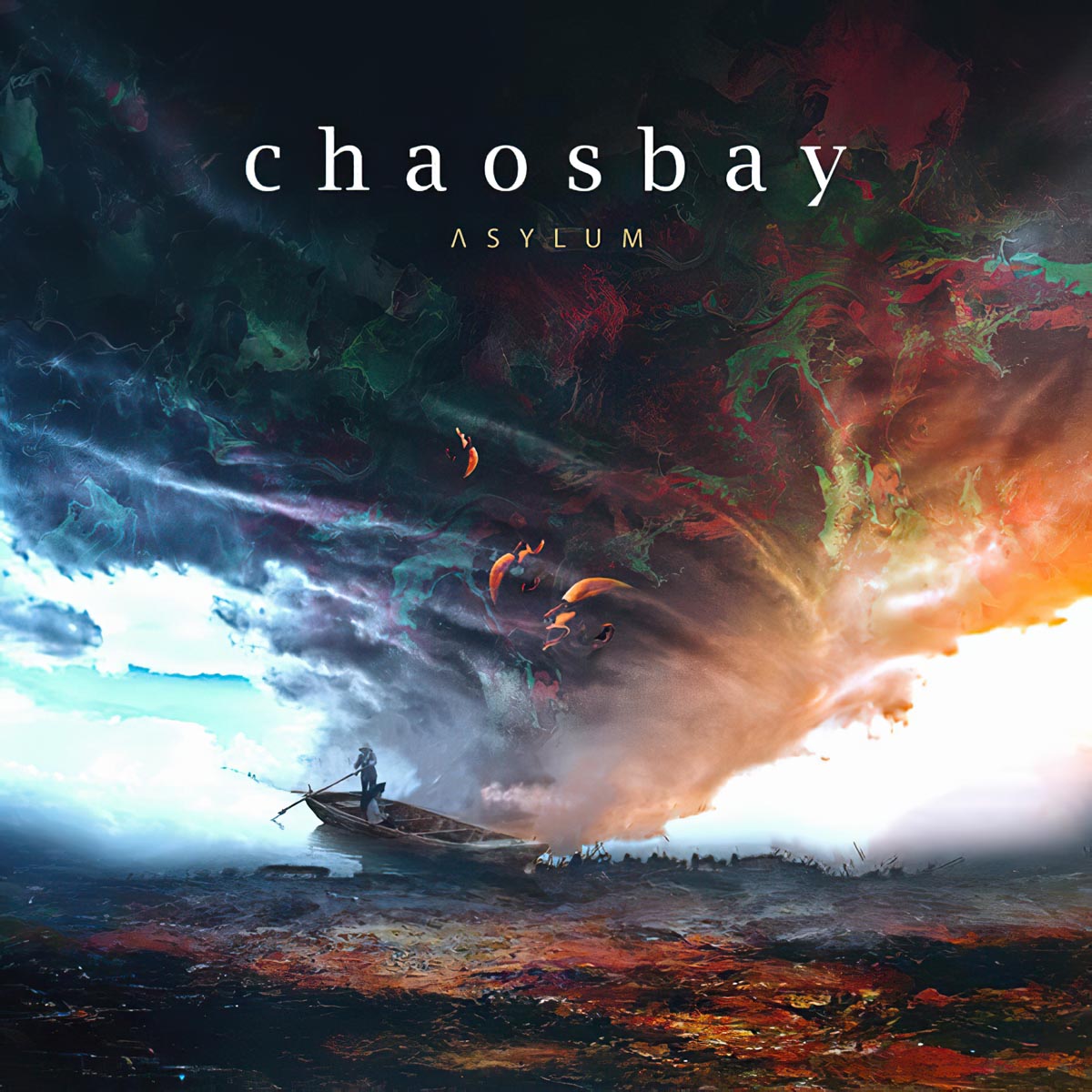 There is nothing in “Asylum” that feels gratuitous. Every aspect contributes to the higher purpose of providing an astonishing record with soul and meaning.  Chaosbay knows precisely when to unleash the musical beast. Once it is free, it will quickly tear you apart. However, they will also take care of your wounds with their more melodic and mellow side.

By listening to “Amen”, we can experience in full intensity the mood changes previously stated. Its chorus is pretty catchy and will serve as one of the recurring themes through the whole record. It is one of the central pieces and addresses the refugee crisis and philosophical questions derived from the existence of tragedies with remarkable depth.

Speaking of the softest and melodic side, “Limbus Inn” and “Soldiers” are the best examples of this musical approach by Chaosbay. Within “Asylum”, such songs could be considered ballads in a certain way. Of course, this is not your typical power ballad. It is full of sonic nuances that set the listener to different sensations. The intensity of such songs builds slowly, but be sure that it will explode at some point.

Even though “Asylum” is full of brutal and heavy passages, “Criminal & Sons” presents some impressive furious soundscapes. Drummer Patrick Bernath and Matthias Heising are all over the place with their dynamic and intense playing, marking impressively the sudden rhythm and tempo changes. Special guest Simon Kramer makes a stellar appearance with a hypnotic and emotional guitar solo that unfolds brilliantly with the djent guitars by Alexander Langner.

The closing track makes sure to wrap the album and its concept brilliantly. “Heavenly Island (Epilogue)” collects all the recurring themes and deliver them for the last time. It is so astute how Chaosbay ends the criticism of such events in a cynical manner. Indifference is the gasoline that fuels the majority of social issues. The lack of empathy maintains the status quo that segregates the helpless, but why should anyone bother? Some powerful people benefit from it.

“Asylum” reflects essentially about human condition. Despite being inspired in events that occurred five years ago, its content is still relevant nowadays where racism and any sorts of discrimination keep segregating people daily. Chaosbay‘s latest album is not an entertainment product. Music as an art should seek to transmit deep emotions and relevant messages that resonates within every human being. With this new album, they succeed on it.

I know the word “asylum” was chosen as the title for this new record since it is the nation’s protection to those who left their country seeking refugee status. But asylum is also the place where people who do not recognize that every human being possesses dignity should be locked away.

With “Asylum,” Chaosbay proof that they are not afraid of facing political and social issues such as those related to the refugee crisis. With the significant ability to understand when it is crucial to unleash their highly technical skills, they manage to create a record full of emotions, meaning, and substance that should place them as one of the most exciting prog metal acts in the coming years.