Sophomore albums can be hell.

If your debut was lousy, well, nobody will care what you do on the next one.  But if that first recording was in any way good (or popular), watch out.  The audience will have expectations.  “It’s gotta sound the same.”  “Do another concept album!”  “This one better be just as good as the last, or else…”  It’s hard to live up to those standards.  And now Cell15 is facing that challenge.

Their 2014 premiere Chapter One didn’t get a lot of play or sales at the time—only recently did it came to our attention—but it is an amazing record.  The redemption story of band brain Robert Scott Richardson, it was a progressive-rock concept album with a fresh, energetic sound that called upon forefathers like Pink Floyd, Kansas, Gentle Giant, Neal Morse, and more. It’s one of my favorite recordings of this year, even though it’s four years old.  And now Cell15’s sophomore album is about to see the light of day—and it is not Chapter Two.  It is not a concept album.  It’s not a personal, cathartic testimony by Richardson.  It relies less on his musical influences. Here’s what it is:  River Utopia.  A prog-rock album. Six songs that still come from Richardson’s heart, observations about life and society.  A band—not just Richardson playing pretty much everything except guitar, as he did the last time around.

It is definitely Cell15. And it is good.  Very good.

Things get rolling with “Castle Walls.”  Swirling, moody keyboard sounds give way to a funky beat (a Richardson signature).  Organ and synthesizer are out front, and at various points one can make out some Tony Banks-like runs.  About 6 ½ minutes in, Shane Jones’ guitar roars in and brings new urgency to the piece, a feel that continues through the rest of the song. The wall image is one that recurs on River Utopia.  Walls separate people—but in this case, it’s not really keeping folks out.  “Castle Walls” is about keeping people in, safe, secure, knowledgeable, in fellowship.  Is this a heaven, a place of many rooms where they faithful find ultimate peace and protection?  That’s hard to say.  Robert Scott Richardson is a Christian and his songs have many allusions to faith, but he’s never overt in his references.

“Streetlights” is up next, which is in your face from the very start with a sound reminiscent of Alan Parsons at his funkiest.  This one could have been on Chapter One, at least in terms of the music (yeah, I know, I just fell into that comparison trap).  It has a nice, pretty straightforward rock section that brings in some variety and texture.  This is the world outside of the aforementioned castle walls, where unnamed folks are “building mansions on the hill” and are ready to kill, if need be.  These people are leading others in bad directions.  The singer is looking instead for a leader that understands the truth about life.  There’s also a mention of rivers in “Streetlights,” another concept that will come up in the album.  “When rivers cease to flow, we go down.”  That’s open for interpretation, again, but Richardson’s waters — perhaps the living waters — carry people to better places (maybe the utopia mentioned in the album title). 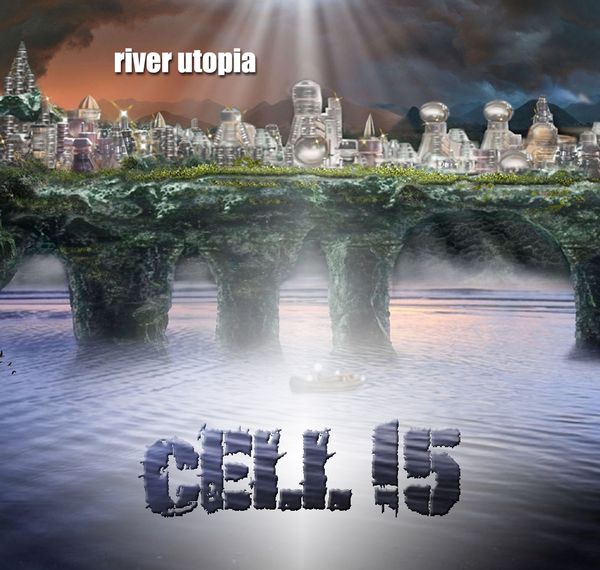 “The Junket” comes third.  A junket is a trip, a journey, often taken when someone is promoting something (including themselves).  In most cases, they are fun and extravagant. Not this one — in either the lyrics or the music. The song is primarily a piano and mellotron piece, jazzy and funky in a ballad mode.  Here, life is difficult (walls are mentioned yet again) for the ordinary people. They’re looking for answers, but the blind are leading the blind.  This junket trip is a tough one, with lots of pitfalls and pain.

The shortest song (just under 5 ½ minutes) is “Revolution of Soul.”  It has a slow keyboard start before rising up to anthemic levels in chords and volume.  On some verses, the vocals and guitar take on a Lenny Kravitz aura of funk and roll.  This song is also about being lost, trying to fill the holes inside by letting the good times roll — and coming up empty. There’s more water: “swimming across the oceans, drowning in emotions.”  And whatever revolution is happening, it doesn’t seem to be changing things for the better.  If anything, it seems more like a civil war inside, tearing the person apart.

“Looking Glass” is about self-examination, analyzing whether or not someone is finding oneself by treating others well.  “Busting on each other just to satisfy our greed, Learn to love each other take only what you need, show the man some mercy and plant the mother seed, you deny these words I say you’re a better man than me.”  The occasional processed vocals (again, something used on Chapter One) have a Roger Waters feel, attached to a song that rocks hard before going into a King Crimson-type break with flute.  “Looking Glass” may be the most compelling song on the album (but that could change for me tomorrow).

And the title track wraps things up.  We’re back to the water imagery.  Big Brother is holding everyone down and the world is going to hell—so float down the River Utopia in search of peace and calm.  The vocals and guitars nod toward Pink Floyd of Dark Side of the Moon or Wish You Were Here, and there’s a middle section that sounds much like “Pigs (Three Different Ones)”.  But the lyrics offer hope, the possibility of finding what we need, definitely not a Roger Waters-type sentiment. In addition to guitarist Jones, kudos go to bassist Dan MacDonald, keyboardist Andrew Colyer and drummer Bill Brasso.  The music is challenging, and they’re up to it. But make no mistake; Cell15 is still Robert Scott Richardson’s baby.  He plays a bit less on this record, but he’s the heart and soul and brains of this outfit.  It really is remarkable that he found his musical vision—and was able to express it—when he reached his late 50s and early 60s.  I hope he stays on a roll, for he is a big talent.

Okay, I’ve got to make another comparison.  River Utopia (which is out May 15) didn’t immediately grab me and knock me over as Chapter One did.  But upon several listens, this one is now embedded in my mind and heart and on heavy rotation on the iPod.  It is rich and deep and thought provoking—with a funky beat.

Sophomore slump?  Nope.  Don’t think so.  Get this one.  River Utopia stands on its own.

Following in the footsteps of the debut "Chapter One", "River Utopia" again spins around the stellar songwriting and performance of maestro Robert Scott Richardson. This time around, Cell15 is a full band , but that doesn’t really impact the sound or feel of the album, it feels as cohesive and powerful as ever. The songs here lack the immediacy of the band’s debut, nonetheless additional listens show a depth and breadth that further cements Cell15 as a musical collective that needs to be heard.