Metal has romanticised pirates much in the way it has romanticized the Vikings, leaving the genre to define historic victories and personalities with bright chords and joyous roars of triumph. Pioneering the party-pirate image is the indomitable Alestorm, quirky and cheery anthems meant for drinking games rather than a true recollection of terror on the high seas. Cauldron Black Ram is a black metal band set out to contest this image of carefree plunderers, reminding with their dark and gritty tones that pirates are not drinking buddies with whom to hoist your glass, but villains with the glint of greed in their eyes. Capturing the slow drag of an anchor across the ocean floor is the band’s fourth full length album “Slaver,” an opus overflowing with ominous intent and guttural filth of murderers and plunderers setting sail on a tumultuous ocean.

First formed in 1996, Cauldron Black Ram has made only a handful of appearances through the mist, just three full-length albums spread over the course of almost 25 years with no less than four years between them. “Slaver” follows six years after its predecessor “Stalagmire,” an album which utilized a strong thrash influence for even greater speed among the grit. “Slaver” growls along more slowly, leaving even darker waters frothing in its wake as the old-school blackened death influences appear in the distorted riffs of “Smoke Pours From the Orifices of the Crematory Idol.” The slower tempo of their latest work calls up images of a churning ocean, massive waves out on the open sea piquing and frothing under a starless sky, particularly spurred by the deep bass of the drums and thunderous blast beats provided by drummer Esh. Having been with the band since its inception alongside guitarist Alim, the band’s evolution across their albums has been incredibly consistent and held a similar image, without question that “Slaver” shows an expansion of their experience and maturity as musicians.

“Slaver” shows a definitive move towards pure black metal, a sort of hunger that could tear flesh from bone with the malevolence of “Graves Awaiting Corpses.” Seeping with malcontent in its murky atmospherics, “Graves Awaiting Corpses” shows the power that can lurk behind these more tentative moments, the same brooding intensity of shadows holding known horrors. Discord and dissonance are sown from the very opening of “Flame,” a slow burning ember of hatred and vitriol that emerges through static and distant screams. Adding to the overwhelming sonic assault that Cauldron Black Ram delivers is the fact that all three of its members contribute vocals throughout the album, providing a wide range of gravel and pitches from track to track. “Whore to War” leans on more pronounced riffs that pull from the influence of old-school death metal, the somewhat circular song structure giving the track an identity that stands out as the sharpest bite on “Slaver” over the somewhat muddied tar that paints the rest of the album in darkness. A somewhat amateur sounding production draws attention away from the well-written structures and thoughtful composition that brings songs such as “Whore to War” to the album’s forefront, particularly as the band finds their sea legs without speed as a crutch. 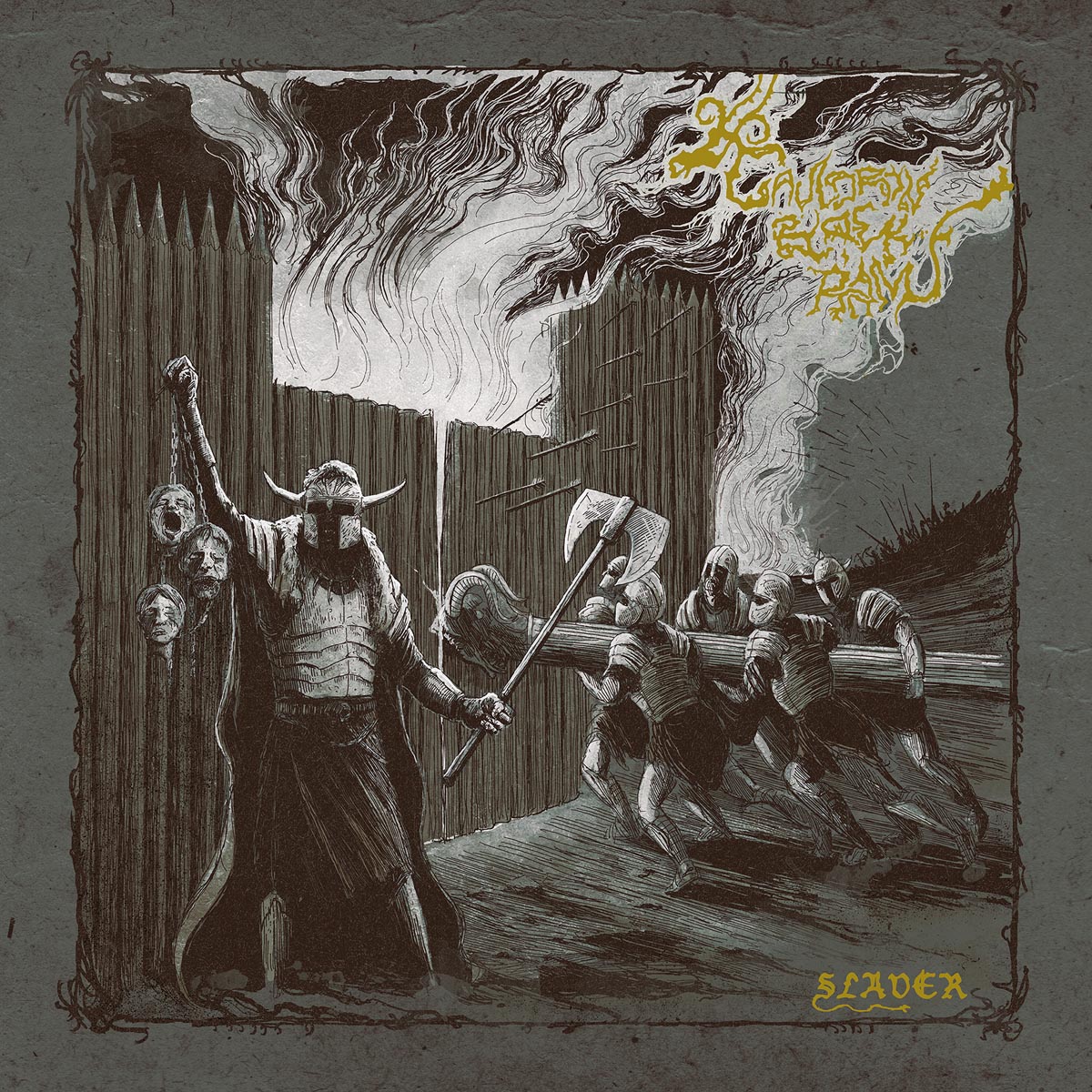 The mix seems to favor those moments that call back to the death and thrash textures that had given “Stalagmire” its footing, vocals shining with greater clarity as the album progresses. The throaty growls in “Temples to Death” stand out perfectly against a spirited drum, giving the multiple vocal approaches even greater depth as the speed ebbs and flows. And while “Slaver” does tend towards the slower side across the album, Cauldron Black Ram has still balanced the progression across tracks in such a way that no two tracks are monotonous in their proximity, just enough variety to lead listeners from a more mild opening into a bitter closing number. Breaking up the album’s center is the short but epic track “His Appearance,” which commands the listener’s attention with a sense of importance and impressive instrumental swell across calculated riffs before giving way to “Whore to War.” The short, self-contained song structure works well for the sound that Cauldron Black Ram has pursued, giving each track an easily digestible nature even in the face of its unbridled aggression.

Such a guttural take on pirates is refreshing in its utter rejection of victory or cheer in favor of unparalleled corruption, reaching for extremity that may have only been faced by outlaws set on conquering the boundless sea. While they never prove themselves to be terribly ambitious in their approach, the decades of musical experience and well-coordinating musicianship give “Slaver” its draw from start to finish. Grim without becoming overbearing, this is a matured and evolved offering that remains consistent with the image of malevolence that Cauldron Black Ram has been painting for years.

If you’re looking for a cheerful band of pirates to drink rum by your side, look elsewhere. Cauldron Black Ram arrives with the sail of black metal hoisted high, delivering an uncompromising vision of darkness that resonates across static and dissonance. “Slaver” is the result of reaching into the ocean and pulling out greed and vitriol itself, a treat for fans of all things filthy and discordant.