“The near future of the entire human race is at stake…”

Cryptic transmissions in myriad languages crackling across an echoing electronic backing track. An album cover with the burning husk of a ravaged planet, perched on the shoulders of a skeletal giant, surrounded by fragmented cosmos. Interludes speaking of unparalleled catastrophe, destruction of the natural world, and a planet on its way to certain disaster. A chilling promise: extinction.

Though it may sound like a tale from the year’s most thrilling science fiction masterpiece, it is instead a brutal punch of reality delivered by death-grind masters Cattle Decapitation. For almost four years the band has been silent on the matter of new material, instead taking to stages across the world, and inflicting their morally-derived violence on a global audience. With a new guitarist and bassist in tow to refine their growing technical focus, 2019 draws to a close with Cattle Decapitation’s most poignant sucker punch yet: “Death Atlas.”

As time has progressed, Cattle Decapitation have evolved from the throes of nearly pure grind into a more technical, death-derived approach to their ethics-centered aggression. Similarly, their conceptual focus has shifted firmly from the mere ethicism surrounding the consumption of meat to focus on the blight humanity has created for an already fragile planet. This is a theme the band also explored in their highly acclaimed 2015 album “The Anthropocene Extinction,” which was also the first album where their more drastic shift to a technical, sometimes melodic approach, garnered widespread positive attention. Rather than abandon this seemingly tentative evolution of their style, Cattle Decapitation have come to embrace the warm reception, adding second guitarist Belisario Dimuzio to the band in 2018 before writing and recording “Death Atlas.”

“Death Atlas” picks up where “The Anthropocene Extinction” left off, both lyrically and musically. The first track, “Anthropogenic: End Transmission” is a mysterious compilation of audio clips in different languages, each seeming to somberly profess some dire warning about a perilous future. With an atmosphere that would not be out of place in a video game or horror film, this opening is deceptively peaceful, but entrancing enough to draw listeners seamlessly into the raw shock of second track, “The Geocide.” It is here where vocalist Travis Ryan unleashes his first roar, the thunder of drums and shrieking guitars tearing a chasm between the unsettling haunting and their trademark brutality. These first two tracks are a welcome return to the pure aggression and ferocity that garnered Cattle Decapitation so much historic attention, including both vocal hooks and exceptional reliability from Dave McGraw on drums. “Death Atlas” is yet another demonstration of McGraw’s world-class abilities, namely the skill to carry on at breakneck speeds with pinpoint precision, creating a rippling backdrop of cymbal clashes and rapid heartbeat of bass drums.

When considering the many talents of Cattle Decapitation, one would be remiss to not herald Ryan’s vocals as some of the most distinct and versatile in metal today. High-pitched wails that ascend in an unrivaled uniqueness through rumbling roars that seem to come from the heart of the earth itself, Ryan uses the tracks of “Death Atlas” as his personal vocal showcase. Moments such as those in “Absolute Destitute” allow him to cross the full range of his many styles, professing both his practiced talents and convictions of humanity’s incessant plague. From shrieks to lamenting song, Ryan takes his rightful role at the helm of the band, an unwavering front-man for a band that has stood unflinching for almost two decades. But his vocal approach is more organic than that of duality: it is a fluid, ever-moving balance between not just vocal registers, but emotion. Though his screams may bellow as deep as latent thunder and his wails may rise with the strength of a howling wind, they can portray the many nuances of anger, mourning, and everything in between. 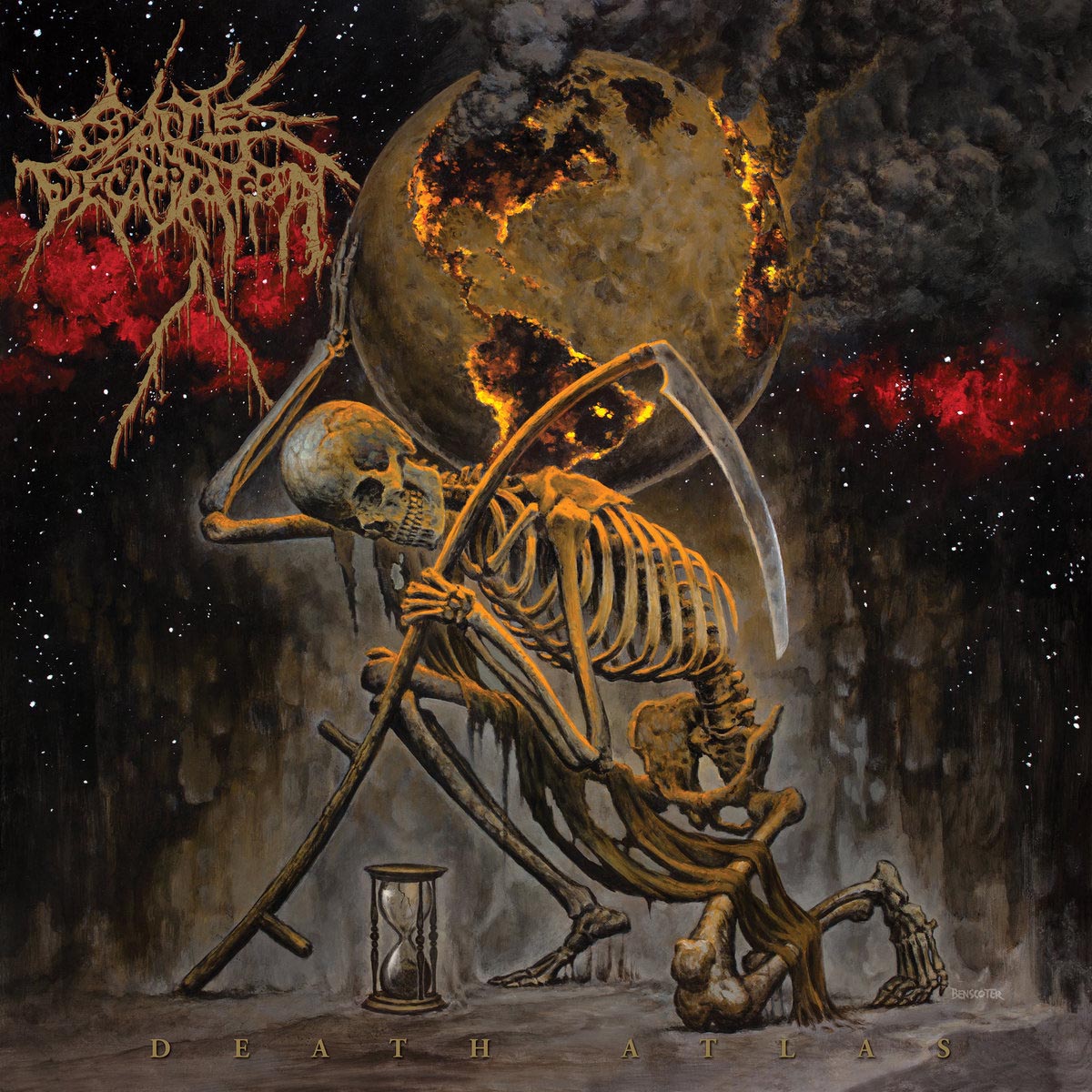 The greatest risks that Cattle Decapitation took in evolving their style came in their sixth studio album, “Monolith of Inhumanity.” As they took on a more technical and melodic flavor, it was easy to cite this as the largest structural shift in their discography. But despite their earlier daring, “Death Atlas” takes on an even more melodic, and often progressive, approach to songwriting. It seems as though Cattle Decapitation are finally settling comfortably into a decision they made more than half a decade prior, and are finally allowing their artistic vision to shine in a light that is neither pure speed nor unfettered hostility. Both composition and heaviness seem to be priorities taken in equal respect, particularly highlighted in “One Day Closer to the End of the World,” which sees guitar passages that alternate between thrash-driven riffs and the relentless shred of pure grind. Most of the album relies on the traditional approach of non-stop brutality, but “Time’s Curtain” slows down to a dismal, anguished pace, guitars giving way to Ryan’s strained, half-clean vocals. A more tender approach to an album that has spent its energy on vilification, this ninth track is a bold statement of talent in both songwriting and production that escape the bounds of the pure death-grind that had dominated their earlier albums.

Of all the album’s strengths, balance is certainly one of the most noteworthy. For such an overwhelming and distinct vocal presence on Ryan’s part, it is clear that the songwriting was carried through with a clear vision for each instrument’s role in the mix. Both strings and drums take their proper claims to brutality as they press on in the more speed-dominated tracks, but allow the tight-knit choreography of two guitars to build depth in passages determined by irresistible riffs and hooks. The production of the album was handled by Dave Otero, who has worked with Cattle Decapitation before, and it is apparent that there was clear communication and expert hands that guided the album from start to finish. Undoubtedly, the vision of “Death Atlas” was brought to life by a combination of experts and visionaries.

Concept and emotion both run high in “Death Atlas,” and this conceptualism runs far beyond lyrical themes. Just as in the opening spoken work of “Anthropogenic: End Transmission,” the nearly hour-long album includes three other spoken word tracks that spell out the current state of humanity. Voices, heavily distorted, spell out truths that sound as they were from nightmares rather than our human reality. Reports of the potential for entire populations displaced by climate change, oceans encroaching on coastal cities, and the mass extinction in those areas which see most biodiversity fill listener’s ears in near whispers. With four total tracks of dire warnings, “Death Atlas” delivers an extremely comprehensive image of humanity on its course to clear ruin, somber reminders of human insignificance as the guitars and drums give way to intonations just as heavy. Rather than providing a true break from the crushing brutality of Cattle Decapitation’s longest album to date, they create further immersion in the raw portrayal of how mankind has tried to enslave the world, but in the process, are rushing headfirst towards their own destruction.

Closing the album is title track “Death Atlas,” which was released as a single accompanying spoken word track “The Unerasable Past.” Though the music video paints a bleak picture of a razed Earth decaying under what humanity has wrought, the track itself stands as one of the strongest on the album. Coming in at just under ten minutes long, “Death Atlas” treats listeners to a highly varied work of art that pulls together all elements that the album had been building until that point. It features both the more methodical, progressive elements that allow Ryan’s screams to carry and even sharper bite than when they are muddied with guitar, but is also allows for the deep notes of Olivier Pinard’s bass to cut directly to the soul in a number of verses. Pacing varied from a funerary march to the all-encompassing speedy delivery of two incredibly talented guitarists, “Death Atlas” is the bold, technical masterpiece that shows their transcendence of instrumental prowess and an unparalleled eye for a marriage between the brutal and conceptual.

“Death Atlas” is unquestionably unapologetic, emotionally evocative, and beautiful in a tortured, apocalyptic fashion. Bolder than ever, Cattle Decapitation deliver unmatched brutality with bold technical mastery and an overwhelming portrait of decay.

Adding vibrant splashes of progressive influences across a dire picture of humanity’s destruction, “Death Atlas” crosses the boundaries of genre to deliver an exhilarating and unforgettable listening experience. Brutality reigns supreme as Cattle Decapitation takes on the weight of a dying world, tearing it apart with a relentlessly enduring spirit of both argression and technical virtuosity.