Formed in 2005 in San Diego County, California, metallers Carnifex has undergone several lineup changes and slight shifts in musical direction. Through the years, they remained committed to delivering their own blend of soul darkening, eye-bloodying, flesh crushing deathcore. 2019 brings another offering from this ambitious party of five, the expansive, dystopic and reaffirming album entitled World War X.

Although not a concept album per se, World War X has a common theme permeating the lyrics: through the lens of war, Carnifex conveys tales of individual struggles, deadly battles, human degradation and the inevitable rot of mankind. If the cover art didn’t give you enough of a hint, I’m telling you right now: you won’t find lyrics about chasing girls, riding fast cars or drinking beer here. War hasn’t been the focus of a death metal album since Bolt Thrower called it a day, and here it takes center stage, with different aspects of if being brought in the lyrics – sometimes literally, and quite often, figuratively.

Speaking of the cover, this one is hard to miss. It shows a chaotic, mysterious and enticing landscape with a monument of intertwined steel and bones seemingly taking the center of attention, but with its surroundings sparking curiosity and fear in equal measures. Devilish winged creatures, a brooding thunderstorm, a sea of lava and an urban jungle background complete this beguiling illustration, which I bet looks even better on a vinyl case.

World War X kicks off with the sound of machine guns, helicopters, marching soldiers and a few bars of a very tense symphony, with the avalanche of guitars and growling vocals quickly coming through on the title track. With lyrics written as a conversation, the song displays multiple, cynical points of view on the subjects of war, death, and certain destruction. If you haven’t done so yet, check out the amazing video they did for World War X below and find out for yourself. The follower “Visions of the End” further expands on the heaviness and propels things even further, with ear-piercing, chainsaw-sounding riffs, blast beats and tasteful leads. On “This Infernal Darkness”, Carnifex provide us the definitive proof that they’re here to transcend the deathcore genre, with multi-layered vocals, different types of growls and black metal rifferama spanned across this track. 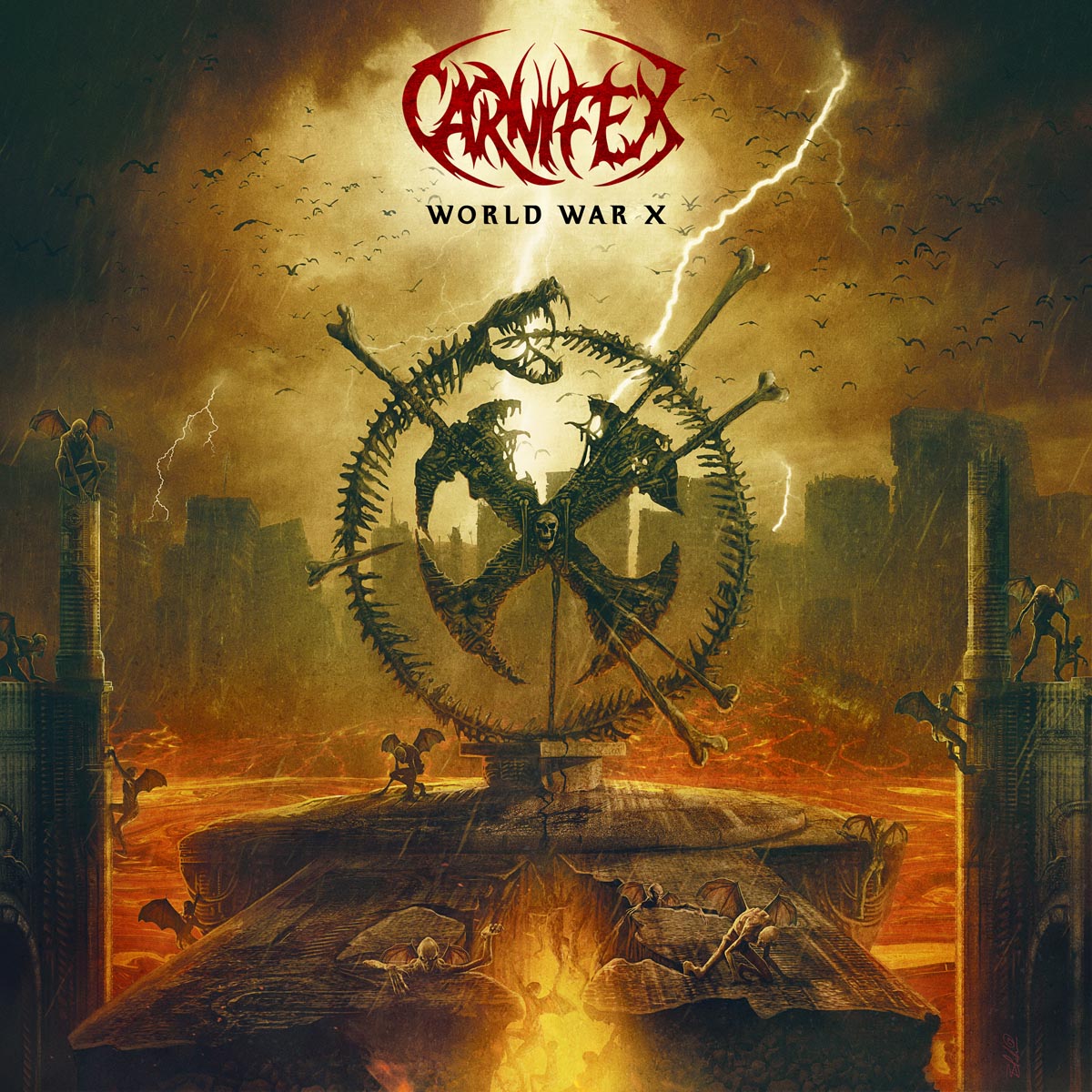 Things take a different and VERY interesting turn when “No Light Shall Save Us” kicks in. This all-encompassing song features Arch Enemy‘s front-woman Alissa White-Gluz, and contains the majority of the album’s elements in just under five minutes. Alissa’s vast range of clean and melodic singing adds variety to the landscape, and the call-and-response between her and singer Scott Ian Lewis take center stage here, adorned by tense and unresolved keyboard melodies, a sludgy breakdown and great fretwork by Jordan Lockrey and Cory Arford. A moody interlude further enhances the band’s intention to explore a different side of their music, much like Alissa has been doing beyond the confines of her daily job with Arch Enemy. The video for “No Light Shall Save Us” can also be seen below.

Another unique and improbable pairing is seen on “All Roads Lead To Hell”, which includes guest guitar solos by Angel Vivaldi. The contrast between his shredding abilities, frantic double-bass drumming and the heavy thump of Fred Calderon’s bass lines work rather well, and one almost wishes this song could last longer, or that Angel was featured on one more track.

If there was one criticism to be written about the contents of World War X it would be towards the genre itself, and not towards the band: it’s the fact that it lacks light and shade. Bands that write within the boundaries of death metal, deathcore and other subdivisions of this genre are sometimes too worried about being true and heavy, and any attempt at modernizing or varying their sound a little bit gets nipped in the bud by producers or criticized by the fan base. In the case of Carnifex, however, that is a minor quibble. World War X has an unstoppable barrage of riffs, blast beats and screams, but also contains many examples of great songwriting, whereas many of their contemporaries in the genre just seem to keep randomly adding one part after the other in their songs.

Going back to the track-list, the sheer brutality continues with “Hail Hellfire” with demon-esque vocals screaming “all hail hellfire”, black and industrial metal influences combined. “By Shadows Thine Held” closes the proceedings with another example of great songwriting. All sides of Carnifex are being fully showcased in this grand finale, including the ever-present-but-so-good-you-need-to-mention-more than-twice blast beats, dissonant chords, neck-breaking percussive riffs and melodic leads. You’d be gasping for air, hopeless, depressed, exhausted and excited in equal measures when the last note of this album kicks in.

World War X is an album where fans of Carnifex will head a lot of things they haven’t before, but it still sounds like the good old band that garnered a lot of attention with their 2014 effort Die Without Hope. The band is noticeably trying to push themselves within the restraints of deathcore, and at the same time delivered one of the staples of what this genre stands for in present times.

1. World War X
2. Visions Of The End
3. This Infernal Darkness
4. Eyes Of The Executioner
5. No Light Shall Save Us (feat. Alissa White-Gluz)
6. All Roads Lead To Hell (feat. Angel Vivaldi)
7. Brushed By The Wings Of Demons
8. Hail Hellfire
9. By Shadows Thine Held

Carnifex raised the stakes with “Die Without Hope” and cemented their reputation with “Slow Death”. "World War X" has the potential to propel this band even further and to broaden their fanbase. This is a powerhouse of extreme musical artistry, with more theatrics and depth than ever before. By the time this album ends, you’ll need a neck brace but will still want to play it again!