Though not necessarily the first band to fly the decrepit banner of death metal, it’s all but impossible to have a conversation about said sub-genre of extreme metal without the name Cannibal Corpse being the first to be dropped. Between their prolific studio output and no nonsense approach to touring every reachable venue on the planet, they have more than earned the right to be synonymous with death metal itself. And while being a band that is perhaps best known for being among the most stylistically consistent acts in existence over the course of 33 years and now, 15 studio albums, they have seen a fair share of evolution since their humble beginnings. Often times these subtle shifts in priority within this outfit’s generally horrific and dissonant formula would coincide with changes either in the lineup of the players themselves, or whoever happened to be working on the other end of the mixing board to hone this raw beast into a refined killing machine.

Developing from a primordial mode of brutality that built off the example provided by Slayer and Possessed, the early days with Scott Burns in the engineer’s chair would eventually give way to a more technically charged and chaotic sound thanks to the entry of former Nevermore guitarist Pat O’Brien. With 2006’s standout offering “Kill,” this more complex template was scaled back to more of a thrashing, straightforward mode of brutality, coinciding with the entry of Hate Eternal guitarist Erik Rutan as producer and engineer. To be clear, though what would round out the second half of the 2000s and the entirety of the 2010s was more streamlined, O’Brien’s occasional songwriting input and refined soloing style would continue to shape Cannibal Corpse’s sound, thus his exodus from the fold just prior to the recording of their latest and 15th studio LP “Violence Unimagined” would be far from inconsequential. Ultimately it would be Rutan himself that would take his place as this outfit’s second lead guitarist, and he proves to be about as competent of a shredder as his predecessor.

Despite the significant change in personnel, this album is stylistically well suited for the straighter up thrashing and accessible songwriting approach that has been the band’s staple since the mid-2000s. Then again, for those who have seen the uncensored version of the album art provided by long time collaborator Vincent Locke, the graphic violence on display would seem to hint that this quintet is looking to relive their primeval days in the early 90s. Indeed, one cant’ help but note the Slayer-like thrashing brutality that permeates the opening crusher “Murderous Rampage”, which throws some “Eaten Back To Life” nostalgia the listener’s way while also being a bit more elaborate. Similar displays of high octane, tremolo riff-steeped mayhem that leans a bit more towards a thrashing demeanor include the muddier and flashier “Ritual Annihilation” and the frenetic blur that is “Overtorture”, which in addition to being chock full of inhuman kit work courtesy of Paul Mazurkiewicz and unfettered guitar mayhem, also sees vocalist Corpsegrinder delivering his signature barks with machinegun-like precision to rival any of his past guttural tongue twisters. 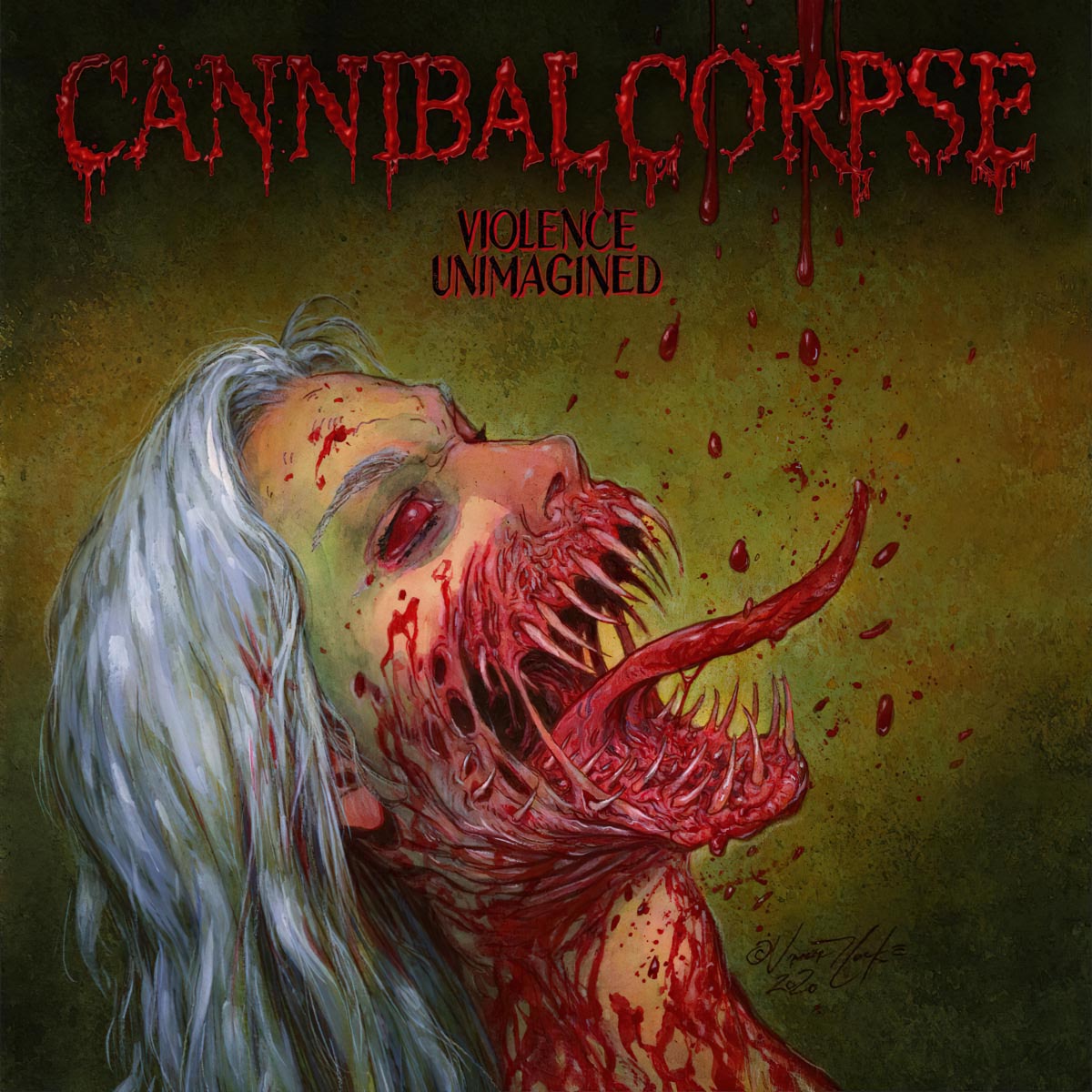 Naturally Cannibal Corpse’s brand of extreme applies not only to high velocity execution, but also in the jarring transitional moments and groove-infused pummels that occur in between, painting a picture that is elaborate as it is ferocious. The punchy, almost slam-like character of “Condemnation Contagion” strikes each chord heavily enough to be likened to an giant zombie built out of thousands of corpses putting craters into a decrepit marshland with each step, and showcases a solo section that has an almost melodeath like quality at times. Speaking of which, the rhythmically nuanced and almost progressive stomp of “Follow The Blood” (mad props to Rob Barrett for penning this bad boy), in addition to having a number of sudden shifts in feel, also features another quirky foray into consonant melodic territory during its solo section, all but to the point of sounding like something off a recent Arch Enemy album. The more almost death ‘n’ roll pacing of “Slowly Sawn” also throws an interesting curveball into the equation, presenting a thudding and vile display of heaviness that will probably appeal heavily to Entombed and Six Feet Under fans.

There are no weak links to speak of here, not moments where one is tempted to hit the skip button, just a consistent and solid display of old school brutality that continues and long and time honored tradition. True to bassist and co-founder Alex Webster’s own sentiments, this album is a collection of distinctive offerings that are recognizable regardless of where the needle drops, or whatever song is blindly selected from the track list for those listeners who aren’t part of the vinyl-obsessed crowd. It goes without saying that from both a band’s perspective and often their primary audience, the latest offering will feel like the best one ever, and while I’d personally put this impressive LP a tad below such seminal classics as “Eaten Back To Life,” “The Bleeding” and “Bloodthirst,” this is definitely among the best things to come out of Cannibal Corpse’s ever expanding graveyard of classics in the past two decades. This ghoulish cadaver may be suffering from more than 3 decades of fermentation, but it’s still primed to rip your proverbial head off, in a good way.

Undaunted by the recent lost of their longtime 6-string technician, the best known purveyors of sonic brutality and zombie-themed lyrical carnage return from their four year studio slumber to up the ante beyond the limits of rational comprehension.