Were we to present you with a new album, and you were to only know that the band is a metal band active since 1972, who has changed their name, had gigs ranging from huge to tiny, and cycled through six drummers over the years, you may reasonably infer we are about to discuss Spinal Tap. However, be at ease; we are actually here to look at the new 2020 album from German powerhouse Bonfire. The latest creation from “Das Metalhaus” is entitled “Fistful of Fire”, and unlike Spinal Tap’s “Shit Sandwich” record, this one will require more than a two-word review.

Still the intellectual and paternal property of guitarist-mastermind Hans Ziller, and a continuation of the band’s thus-far successful tenure with vocalist Alexx Stahl, April 2020 brings the metal world a surprisingly cohesive and modern production in the form of “Fistful of Fire.”  The band continues with Frank Pané on guitars, Ronnie Parkes on bass, André Hilgers on drums; the same lineup since previous albums “Byte the Bullet”, “Temple of Lies”, and “Legends”.

The album opens with a little piece of cello, nylon strings, and pan flute before thundering toms join in, setting a tempo for the arrival of layers of electric rhythm guitar and lead guitar melodies, building to a cinematic soundscape, trailing off a la Mindcrime to loudly smash us into “Gotta Get Away,” an old-school melodic metalwork carrying the Bonfire torch, obvious for miles around. Alexx’s vocal delivery remains solid: imagine delivery in the style of Jon Bon Jovi, but with the range and power of Ripper Owens. The song is not the most hook-laden, or the most memorable ear-candy, but it’s a heavy rocker with nice lead guitar work throughout, and it carries a noble performance of breaking the ice and setting the stage. “Devil Made Me Do It,” however, is another animal. This track is a memorable and enjoyable track, flexing not only the songwriting prowess of the band, and not only the remarkable Becker-and-Friedman style harmonized guitar leads, but most of all the over-the-top vocal performance of Alexx Stahl. His range is up there, way up there, shaking the dust out of the rafters like nothing we have heard since Manimal. While it won’t get any Grammy nominations (and who cares), it’s a fun and noteworthy track, certainly a highlight of the album.

“Ride the Blade,” may just be a standard-issue 4/4 metal track, but it hides some of the most interesting and technical guitar work of the album. This paves the way for the Bon Jovial ballad known as “When an Old Man Cries,” an adagio tempo piece in a bittersweet sort of key, slowly building to a climax showcasing Alexx’s vocal technique and range once again. With its blend of acoustics and mid-gain electrics, “Old Man” is a sorbet which effectively cleanses our palates for the next course, “Rock’ N’ Roll Survivors,” an old-school rocker, which is the kind of trope we are increasingly seeing from, well, rockers of a certain age. From Biff Byfford to Phil Campbell to Deen Castronovo to former Bonfire alumnus David Reece, we are seeing songs showcasing the scars of a long career in rock’ n’ roll; a badge to denote “been there done that, and lived to tell the tale.”  Bonfire throws some more fuel on the fire for the next track, “Fire and Ice,” a heavier metal piece with a faster tempo. The “Slippery When Wet” vibes return with the song “Warrior,” a mid-tempo rocker fusing mid-to-high gain electric guitar with staccato keyboard chords, and lyrics reflective of one’s lot in life as a warrior. 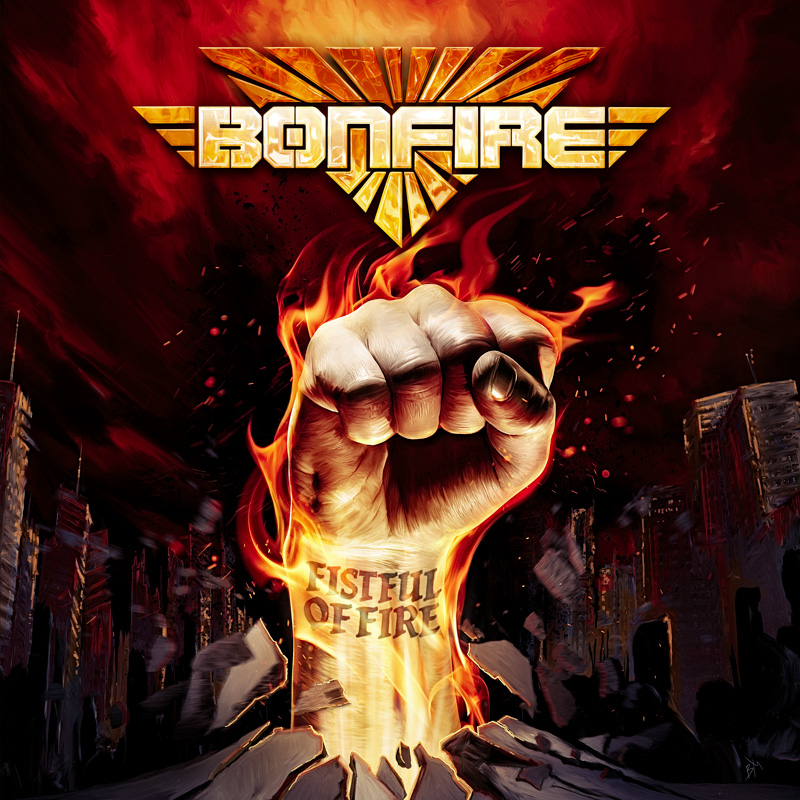 If “Old Man” was a palate cleanser, then “Fire Etude” is the seventh inning stretch. For those of us guilty of enjoying some gratuitous and self-indulgent lead guitar porn, it is a fun little soundbyte showcasing some Hans chops. Combining neoclassical underpinnings with EVH technique, and a big wet dollop of digital delay, much like Kip’s bass solo leading into “Baptized by Fire,” from Winger II. A lot of fire happening, in any case. In the case of Bonfire, this sets the stage for “Breaking Out,” a gritty little number evoking a sense of Dokken’s “Kiss of Death,” or at least the vibe of the “Back for the Attack” album. Hans and Frank do not let the opportunity pass to treat us to some more stellar lead guitar work. The title track is not as bombastic or incendiary as one might expect, in fact it may be one of the less memorable pieces on the album. The guitar leads do not disappoint, set over what is essentially a “Monkey Business” rhythm structure. The chorus is just a double repetition of the titular phrase, with a slight twist in the melody of the repetition. It is a good song, but not a strength of the album. For only being one minute long, “The Surge” is actually more interesting, as another little instrumental interlude. A piano and military snare march, with meandering lead guitar, it is more like something we would expect on an Iced Earth concept album. Which is great. This sets the stage for what is effectively the end of the album: “Gloryland.” This track contains much of the bombast and fire in the belly we would have enjoyed in the title track. However, as a strategic move, it is a smart way to close an album. The track is heavy, fast-paced, and laden with blistering technical guitar leads. It is as good away to bring an album to completion as any. For those who enjoyed “Old Man,” he returns in an unplugged form as the last track, effectively as a bonus track. It may actually be a better arrangement than the original, so it is worth hearing.

Can we call “Fistful” a don’t-miss-it album of 2020? Plainly speaking, no. It does not blaze any new trails or raise any eyebrows. It is like leaving an Amazon review for a box of steel wool. It works or it doesn’t. This new album from Bonfire is good, and it does its job. It just does not do anything new or especially remarkable. However, as authentically retro old-school metal goes, it is superbly executed with some fun tricks throughout, so depending upon your personal tastes, it may be exactly your cup of tea. It hit the streets last week, so check out the videos, and if you like what you hear, pick up a copy, or check out the Bonfire site right here.

If you are in the market for lively, heavy, authentic old-school metal from some of the finest veteran rockers of the metal scene, look no further than Bonfire’s new “Fistful of Fire.” What it does, it does very well, with numerous hidden gems to enjoy