In October 2005, Finnish symphonic-metal juggernauts Nightwish said “Bye Bye Beautiful” to iconic front-woman Tarja Turunen and sent her on to other solo pursuits. In a parallel universe, in 2016, German symphonic metal newcomer Beyond the Black parted company with front-woman Jennifer Haben. Here is the twist: in this particular divorce settlement, Jennifer kept the kids, or at least the name of the band. Geoff Tate was unavailable for comment.

Essentially, this means that in just two years since the band’s 2014 debut, it launched two impressive heavyweight albums before receiving an emergency everything-ectomy. With a brand-new 2018 release hitting the streets this week, does Beyond the Black 2.0 continue to stand up as a contender in its weight class?

The new album is called Heart of the Hurricane, named for the second track of the disc, and it is indeed an ambitious undertaking. One of the first and most noticeable attributes of the release is the prevalence of keyboards. They form the nexus for most of the composition and production, filling out the overall sound nicely. According to Napalm Records, the band’s label, the album delivers “epic keyboard passages.” However, between the album notes and the band photos, there seems to be no keyboardist credited or pictured. For those of us who have listened to a progressive metal album or two, epic keyboard passages do not usually play themselves. This is by no means an attempt to diminish the band or this album; it merely seems a lost opportunity to showcase the phantom of the opera lurking somewhere underneath the record label’s floorboards.

The core of the band consists of a five-piece a la Iron Maiden in the good old pre-Janick golden years: vocals, two guitars, bass, and drums. The guitars have good meaty EL34 tube grit without ever feeling soaked in wet effects. The bass is exactly where it should be on a project such as this: punctuating the right spots, and helping the drums drive a powerful beat. The mix is good, in the sense that the listener almost never notices it, because nothing is lacking or under-represented. To an extent, record engineering is a bit like this: the best feedback you can hear is nothing at all. If you are Max Norman and you produced Youthanasia, you may hear almost nothing from the fans on the sound of the album, which may seem thankless, and yet Max is probably thankful he is not wearing Bob Rock’s shoes in the wake of St. Anger. While this Beyond the Black album is unfortunately not a Max Norman product, it is solid and always sounds good.

The album kicks off “Hysteria,” which although unrelated to Def Leppard, still gets right down to business of demonstrating what this band and this album are about. Driving guitar riff, Euro-style power metal keyboards, soaring female vocals? All within the first minute? Check, check, and check. It is worth mentioning that some of the most blistering guitar shred of the album can be found in the solos on the first track, and it really makes it shine. That being said, our own Nick Andreas here reminded us this week of something so critical: it is hard to overstate the importance of an album’s first track. It truly is the crucible in which an album is tested in the ear and mind of the listener. As many business seminars will invariably teach us, one only gets one chance to make a first impression. In many ways, this song was a great choice for the job. It is straightforward, with a catchy chorus, nice riffs, and wicked shred. However, this is also the track where the uninitiated will get their first dose of Jennifer’s vocals. While they are certainly good by almost any reasonable standard, they often seem like they are the kind of vocal sound and expression that either clicks with the listener, or not. At times, she sounds youthful, and contemporary in a pop vocalist way. In the first song, when it slows down into a softer bridge, and she says, “Your hands, never fail to wake my wishes,” it has just enough of an awkward crooning vibrato to give the listener pause and wonder if it is sexy or just mildly uncomfortable. None of this is necessarily bad, it is simply an attempt to objectively dissect what is inherently a subjectively received element. Among the cream of the genre’s women, one usually finds the assertive, raw, womanly power of mature vocalization. However, Jennifer’s vocals really come into their own in the soaring powerful choruses. When she stretches the vocal cords and just goes for it, and lets it fly, her delivery is among the very best in the scene today. It is honestly impressive work for her diminutive stature and appearance, and perhaps as she gets a few more albums and tours under her black leather belt, she will continue to grow and impress as a new talent.

Getting back to the album itself, the title track comes in second with a riff right out of the 1990 Zakk Wylde playbook, and it delivers rather well. The song does not dilly-dally around with getting to the big catchy chorus, and really, it’s OK because it’s what makes the song. Arguably, what may actually make the song are the big “oh oh’s” around the 2:50 mark. Very nice layering and harmony. The third track, “Through the Mirror,” should not be underestimated. Hear it more than twice and it will rent a space in your head for at least a couple days. While there is nothing necessarily new or amazing about it, it’s just simply a good song, with a nice build-up leading into a sugar-sweet ballad guitar lead. 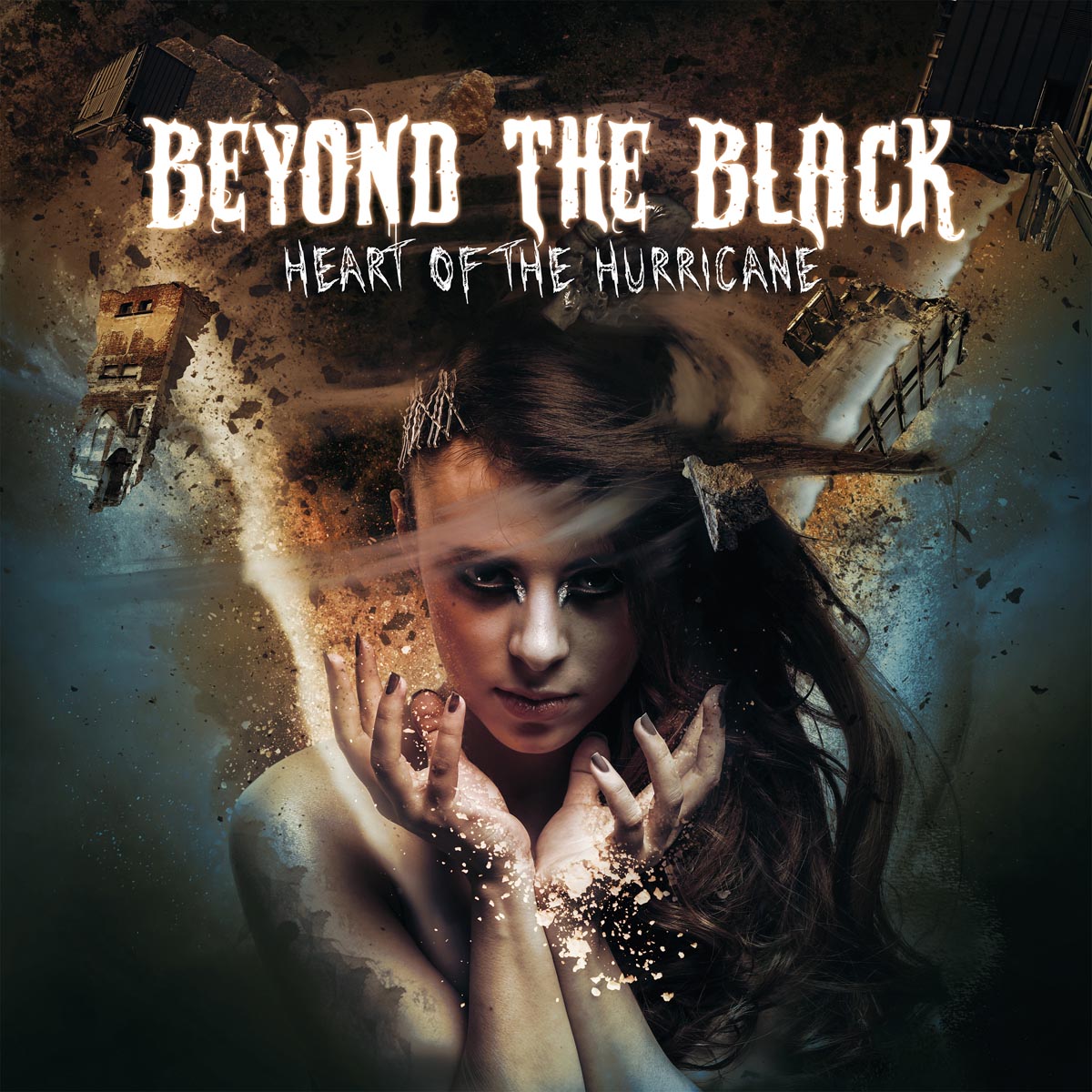 “Heart of the Hurricane” Album Artwork

The fourth track, “Million Lightyears,” may lose a few people. A male backing vocalist, presumably one of the guitar players, says “I’m a million lightyears” without accompaniment at the very beginning, and it is hard to tell if it is the accent or the vocalization which makes it sound a bit off, but it just is what it is. The same voice comes back for some call-and-response vocal parts through the song, and it never sounds quite right. For those of us who are less than perfect at speaking German, it is impressive the efforts that international vocalists go through to learn and perform in what is, for better or worse, the unofficial language of popular rock music. As a whole, the song is neither good nor bad. It neither helps or hurts the album, although the guitar leads continue to deliver. Coming next, “Song of the Godless” pushes all its folk-metal chips to the center of the table to deliver something straight out of Annette Olzon-era Nightwish. However, like its predecessor, it is a fair contribution to the album and keeps it moving forward while remaining entertaining and listenable. This is followed by the song “Escape from the Earth,” which is an interesting departure. It is not symphonic metal or power metal. In fact, it’s an odd little departure. Picture Tori Amos’s “Hey Jupiter,” if produced by Arjen Lucassen. You are welcome for that, by the way.

The album stumbles over some originality with the song “Beneath a Blackened Sky,” which hopefully inadvertently sounds almost just like “Song of Myself,” the climax of Nightwish’s Imaginearum album. As a whole, it is actually not a bad song at all, but the unoriginal intro leaves a taste behind such that it is difficult not to hear Imaginaerum for the rest of the song. The album eventually arrives at “My God is Dead,” which at times is like a late-night lament by teenage Nietzsche. The song actually alternates repeatedly between the male backing vocalist screaming “My God is dead” at the absolute breaking point, and Jennifer lamenting the same words herself. Perhaps it’s a bit emo, perhaps it’s totally kosher for metal. We’ll let you decide on this one. The song “Freedom,” drop-tunes the hell out of the guitar and gets downright nasty. Even if it isn’t a listener’s particular cup of tea, hats off to the band for doing something to add spice and variety to an album.

Speaking of variety, the album nearly gave us whiplash with how it changed from such a gritty heavy song over to a sweet little gem called “Breeze.” It is tender and somber enough that it probably fits someplace between Kip Winger’s “Holy Man” and “Here Comes the Flood” by Peter Gabriel. This song alone commands the listener to take this album, and by extension this band, a little more seriously. After this track, the album delivers two more respectable songs which are in keeping with the band as we know them and seal the deal rather nicely.

If Beyond the Black are trying to take their game to the next level, they succeeded with the release of Heart of the Hurricane. There is honestly very little about this album which does not recommend itself to fans of symphonic metal. The writing is innovative and catchy, the mix is appealing, the musicianship is solid, especially the lead guitars and the phantom keyboards. It is strongly suggested that readers check out the attached video clip, and see how Ms. Haben’s vocals round out the whole package. If one song from the new album sounds good, it is a solid bet that the entire album, with its 15 tracks and generous variety, will have lasting replay value, along with a place on the shelf.

“Heart of the Hurricane” Track-Listing:

Fans of the archetypal acts such as After Forever, Epica, and of course Nightwish will want to give this album a go. Beyond the Black are proving themselves to be worthy carriers of the symphonic metal banner, female-fronted status aside. The songwriting, production, and musicianship carry the day, and make for a very enjoyable hour of tasteful headbanging.