Bent Knee is a band without boundaries.  Their sound is hard to pin down.  Eccentric pop? Art rock? Avant-garde prog?  No matter how you categorize it, you must include a qualifying adjective to convey this simple message: It’s unorthodox.  And making it more difficult to apply a label is the fact that Bent Knee is constantly evolving their sound and trying new things.  October 11, 2019 marks the release of their fifth album and newest evolution “You Know What They Mean” (YKWTM).

Fans of the band have noted that studio Bent Knee and live performance Bent Knee sometimes feel like two different – yet equally amazing – experiences.  “You Know What They Mean” is the first album to truly capture their live essence.  There’s a raw, primal energy and a focus on music that’s fun.  Even when the underlying mood is anger, introspection, pain or desperation, the presentation ensures we are all having a good time with it.

“This album really portrays us as people, in addition to our music, a lot more than any of our other records,” explains vocalist/keyboardist Courtney Swain.  “We’re a big group with a lot of different personalities and a lot of voices, but our music brings us together. On the past four albums you could hear the music, but you couldn’t really hear who we are.”

Bent Knee took a different approach in the writing phase this time around.  Rather than each person bringing in demos that had been written independently, the band wrote and developed these songs together in the studio and while touring.  Performing the songs live at shows throughout 2018 allowed the tunes to grow and transform during a particularly difficult touring year. In June of 2018 drummer Gavin Wallace-Ailsworth slipped down some stairs exiting the stage at a show in San Francisco and was forced to leave a headlining tour early while undergoing ankle surgery.  Then in November of 2018, while on tour with Haken and Leprous, Bent Knee’s van flipped to its side on an icy highway in Wyoming. Nobody was seriously hurt and the band rebounded quickly from the incident.

“You Know What They Mean” opens with “Lansing,” a short audio clip from a live performance struggling through technical difficulties.  It’s inclusion here at the top seems to say “nobody knows what’s about to happen, so let’s just see where this goes.”  Captured real life moments like “Lansing” and “Lowell” – a short unpolished studio jam alongside audio clips of the band members talking  give the album an intimate “peek behind the curtains” vibe.  YKWTM could be the soundtrack to a behind the scenes Bent Knee documentary. 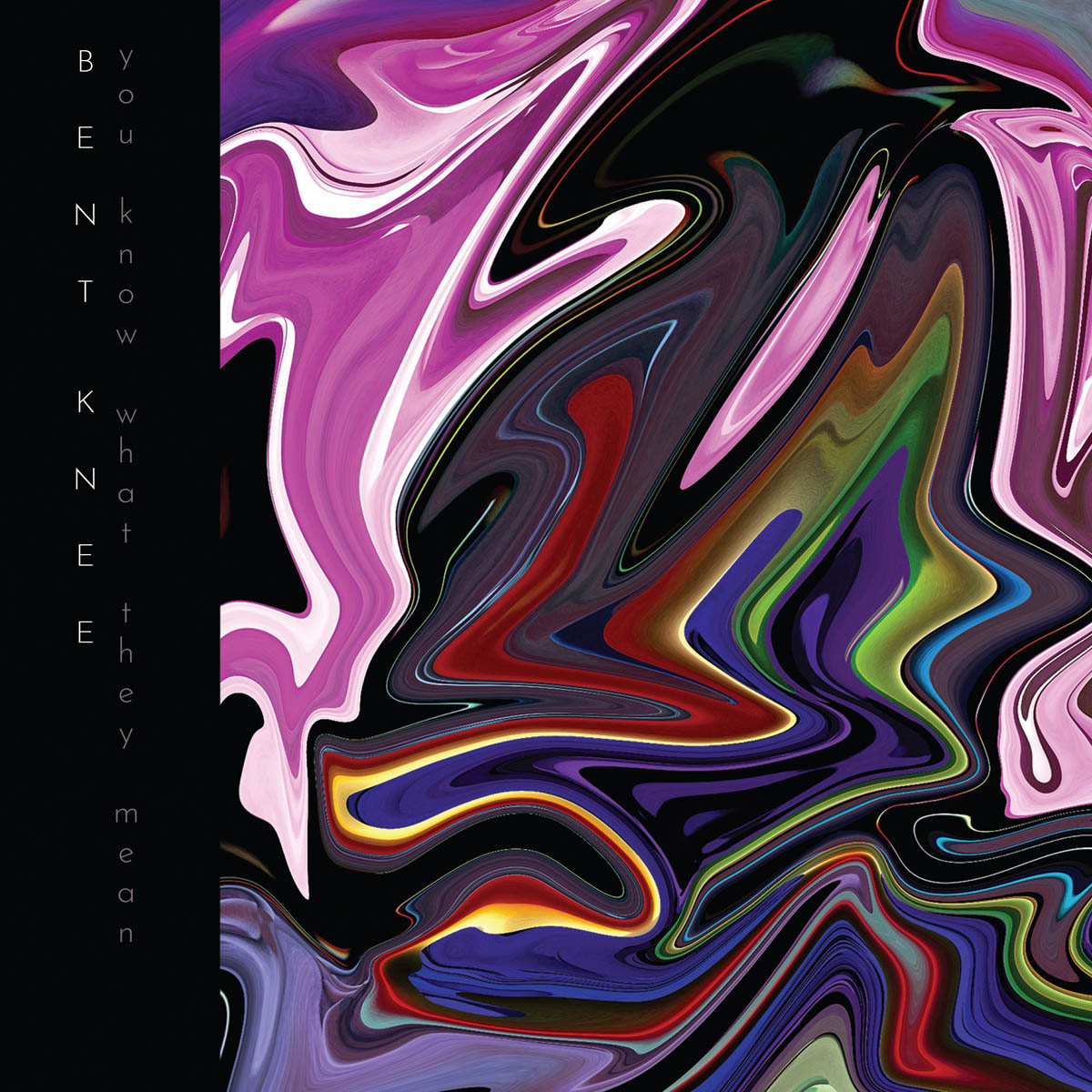 “You Know What They Mean” Album Artwork

“Bone Rage,” the true opener and the band’s third single to drop pre-album release, kicks things off in overdrive.  Everything is cranked to 11. The track “lovemenot” found later in the album receives a similarly raucous sonic treatment.  In fact, the majority of the album frequents this territory. It’s unapologetically loud and meticulously dirty.  And that’s a good thing. Nothing here is played safe.

More so than any previous release, this collection demands movement.  While still as technical as ever before there’s tremendous focus on groove.  Listeners will thrash to the aggression of “Bone Rage”, bop to the conga rhythms of “Hold Me In”, stomp around in the pain of “lovemenot”, bounce to the beat of “Cradle of Rocks,” and sway along with the drug trip that is “It Happens.”  Bassist Jessica Kion and drummer Gavin Wallace-Ailsworth are tighter than ever before.  Undeterred by the danceable beats, satisfying intricacies worthy of dissection hide just beneath the surface.  Complex time signatures are present but less jarring and obvious. And, yes, it’s possible to dance in odd time.

Bent Knee’s ability to transition flawlessly between chaotic and serene remains a fixture. “Egg Replacer” volleys between soft, haunting verses and huge, thundering choruses.  Then out of nowhere, “Bird Song” – Swain’s mid-album piano ballad – will stop you in your tracks with it’s tender vulnerability.  Whatever breath remains in your body from all the dancing in the preceding songs will be taken from you by Swain in this one.

Most tracks get straight to the point, wrapping in under 5 minutes, but I like to consider the “Garbage Shark” / “Golden Hour” combo one singular 10-minute piece of music.  The band reliably combines the two during live performances so I feel this is a fair treatment.  The pairing takes it’s time developing an ominous, pulsing soundscape before delivering two powerful and chilling crescendos rivaling any from previous Bent Knee releases.  Swain’s dramatic, haunting expressive vocals pair perfectly with the punchy textures of guitarist Ben Levin and Chris Baum’s piercing violin.

Having a first-rate  sound engineer & producer as an official member of the band is a smart choice.  Vince Welch’s thick, dynamic, atmospheric textures are predominant throughout.  He knows his band-mates well and knows how and when to shine a spotlight on them.  Even the tracks with the most straightforward song structures such as “Egg Replacer,” “Cradle of Rocks,” and the albums’ first single “Catch Light” are dripping with dynamics.

I know it’s cliché, but the phrase “ahead of their time” comes to mind.  When artists lead the charge into uncharted territory they must ask their audience to follow them into the unknown.  For innovative music to succeed listeners must approach it with the same open mindedness as the composers. Those who embrace Bent Knee’s transmogrification of norms tend to do so whole-heartedly while others might not be ready for it yet.  You either love it or you loveitnot. Personally, I give it the gold.


“You Know What They Mean” Track-list:

On Tour with Thank You Scientist & The Tea Club:

Bent Knee’s fifth studio release delivers a sonic experience that further blurs the boundaries between prog rock and experimental pop. "You Know What They Mean" is a must have for audiophiles in the market for sturdy grooves, grungy guitars, and melodic hooks spiced up with meticulously crafted, dynamic production.