Horror has always coexisted beautifully alongside extreme metal, sometimes melding to the point where they are grotesquely indistinguishable. French death-grind act Benighted have adopted horror as an integral part of the band’s identity, the concepts behind their albums born from all things depraved and obscene. Living up to the expectations that they have created for themselves in the two decades since their inception, upcoming studio album “Obscene Repressed” tells a twisted tale of gruesome proportions, delivered by the scalding brutality of relentless extremity. Each moment of this crushing opus seems designed to shock the listener as much as it entices them, dissonance between the initial revulsion of its characters and the punishing speed and brutality with which the musicians press forth.

Authenticity and tradition have given Benighted a sound that is unmistakably deathgrind but uniquely layered with conceptual appeal. Mastermind and vocalist Julien Truchan draws his inspiration from his position as a nurse in a psychiatric hospital, a unique creative opportunity that has manifested itself in the chilling concept behind “Obscene Repressed.” This album follows the tale of a boy with a facial deformity struggling both with psychosis and oedipal issues, each song detailing a new event that results from his twisted perception of reality. Some tracks leaning towards blatant shock-horror and others seeking out more subtle perversions, the unique obscenity meshes well with Benighted’s unforgiving sonic assault.

The standout feature of “Obscene Repressed” is its production, a clear product of the modern era and incredible amounts of attention to detail. Though it sometimes strays on the edge of over-produced against the sheer brutality it brings, this affection for modernity has allowed for layered vocal styles and a mix which balances most of the instruments with equal care. Truchan’s vocals range from shrieking to growling, an array which keeps “Obscene Repressed” fresh and exciting throughout its forty minute run time. Opening track “Obscene Repressed” ties together sound effects, shrieks, and screams in a way that perfectly sets the tone for the rest of the album to come, particularly in the various vocal inflections the listener can come to expect. As is now standard for Benighted, Truchan is not alone in his vocal contributions, with “Obscene Repressed” featuring three guest vocalists, including Jamey Jasta from Hatebreed on sixth track “Implore the Negative.” 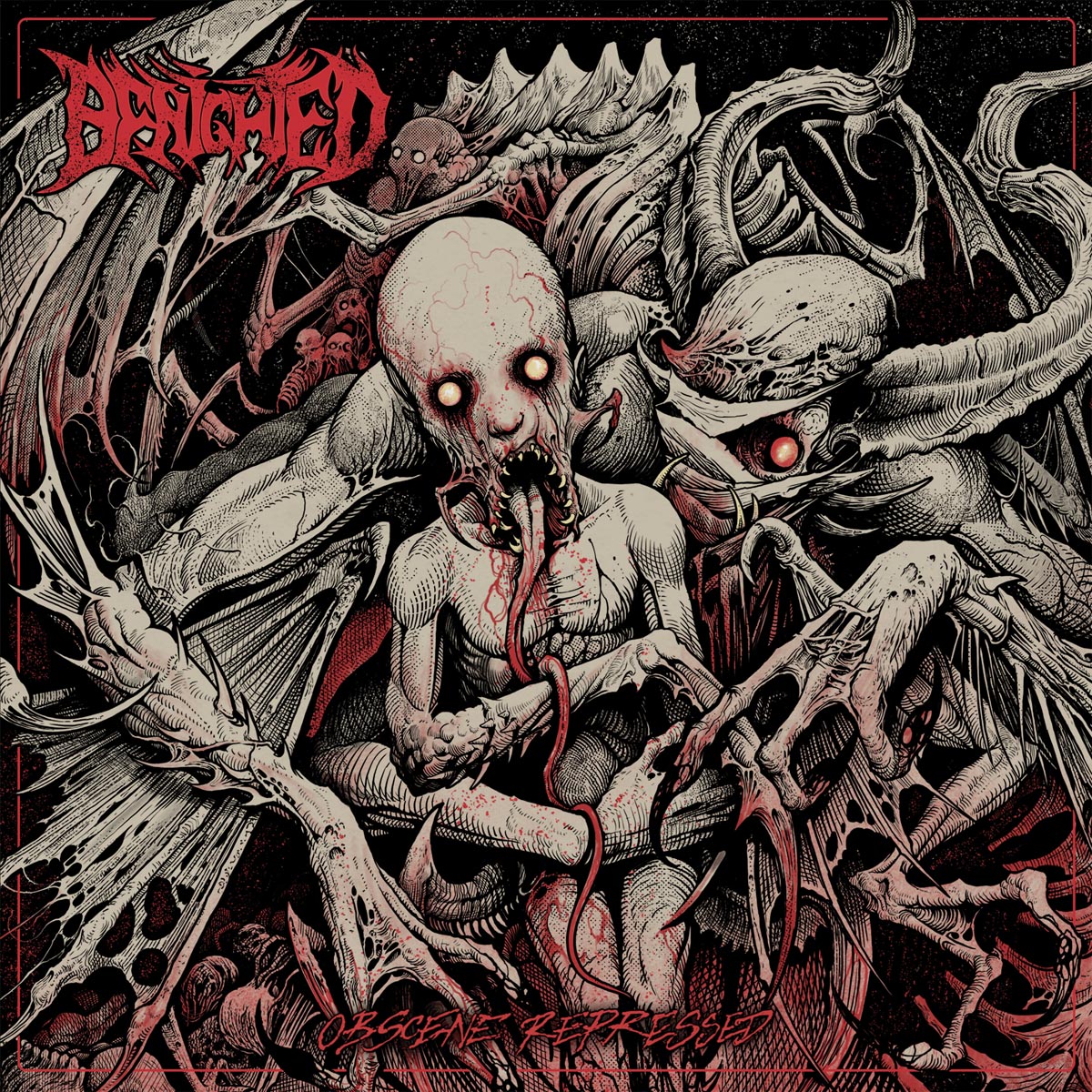 Of the twelve tracks on the album, “Implore the Negative” marks both the halfway point and the full spectrum of intensity that Benighted has to offer. Jasta’s voice is a natural match for the drum-heavy mix, from the moment of the opening percussion through the abrasive chorus that hits with the unparalleled might. Where a fair portion of “Obscene Repressed” neglects to highlight the abilities of guitarists Fabien Desgardins and Emmanuel Dalle, “Implore the Negative” gives the strings enough room to execute their fierce bite and prove that they are more than capable than keeping up with the galloping pace set by Kévin Paradis on drums. With most tracks coming in at around three minutes long, more than four minutes on “Implore the Negative” allow for aggressive instrumental passages and form a natural ebb and flow which lends itself well to this brutal form of storytelling.

Though sticking mostly to more traditional veins of grind, there are some moments where cinematic hooks and additional effects give “Obscene Repressed” even more depth, such as eighth track “Casual Piece of Meat” opening with a less aggressive hook and working through a somewhat more restrained piece of music. It feels as though these moments of increased restraint or cinematic flourishes are jarringly out of place, forcing the conceptual narrative above the caustic bite of their talented instrumentalists. Once again, these persisting moments bring the album to err on the side of oppressive production decisions. Benighted have shown themselves more than capable of creating shocking brutality that proceeds at breakneck speeds, and have also happily adopted the benefits of modernity in their choices of overall composition, but in doing so they have suffocated some of their potential. However, these don’t take away from the fact that “Obscene Repressed” is a complete and full-formed onslaught of death-grind that stops for nothing and no one as it tears its way through a story of vile proportions.

Crushing and relentless, a mixture of deathgrind and shock-horror mark Benighted’s latest album as a bold step in the pursuit of pure brutality. Relying on speed and conceptual perversions, the French metallers stick close to the traditions of their genre and add another impressive mark to their vast discography.