The black-clad beast gets a sexier upgrade.

The musical journey of Finnish songwriter and arguably ironic innovator Anton Kabanen has been, if nothing else, impossible to ignore. Though arguably born out of the more AOR and restrained incarnation of power metal that was all the rage in the mid-2000s, his original project Battle Beast (which still rages on without him), had a very different take on things that would become one of several alternatives by the dawn of the present decade. Consisting of a marriage of pop songwriting that featured a synthesizer-happy stylistic reminiscence on early to mid-80s post-disco with a melodic yet biting form of female-fronted heavy metal that drew heavy comparison to Warlock and mid-80s Accept (circa the Metal Heart album), Anton and company staked out a niche all their own amid a metal scene that was drifting gradually back towards the fast-paced power metal of the early 2000s. Three albums deep into their rush to the helm of the melodic metal world, Kabanen cut ties with his former band and staked out a fresh take on the hybrid sound he helped popularize, featuring a more power metal-oriented presentation, thus was born Beast In Black.

Following a highly impressive debut effort a couple years ago in Berserker, that some fans of Battle Beast would argue was the true continuation of said band, a veritable monster of a follow up has been unleashed in From Hell With Love. The less than subtle play on the title of an iconic James Bond story and film isn’t the only blast from the past to round out this album’s musical and lyrical contents, yet it comes in a fresh and highly polished package fit for the year that will ultimately end with the demise of the 2010s. Likewise, barring the exodus of drummer Sami Hanninen and the entry of his replacement Atte Palokangas, along with a pristine Amazonian bombshell riding atop the band’s beastly mascot adorning the album cover, this opus opts to change little from the formula of its predecessor apart from further distilling things for a more concentrated punch of melodic hooks and metallic edge. From 80s retro synthesizers, Iron Maiden-inspired riff work, and shred-happy guitar gymnastics to the high-pitched wails and versatile vocal personality of Yannis Papadopoulos with his occasional parallels to Udo Dirkschneider and Heavenly’s Ben Sotto, the sky is the proverbial limit. 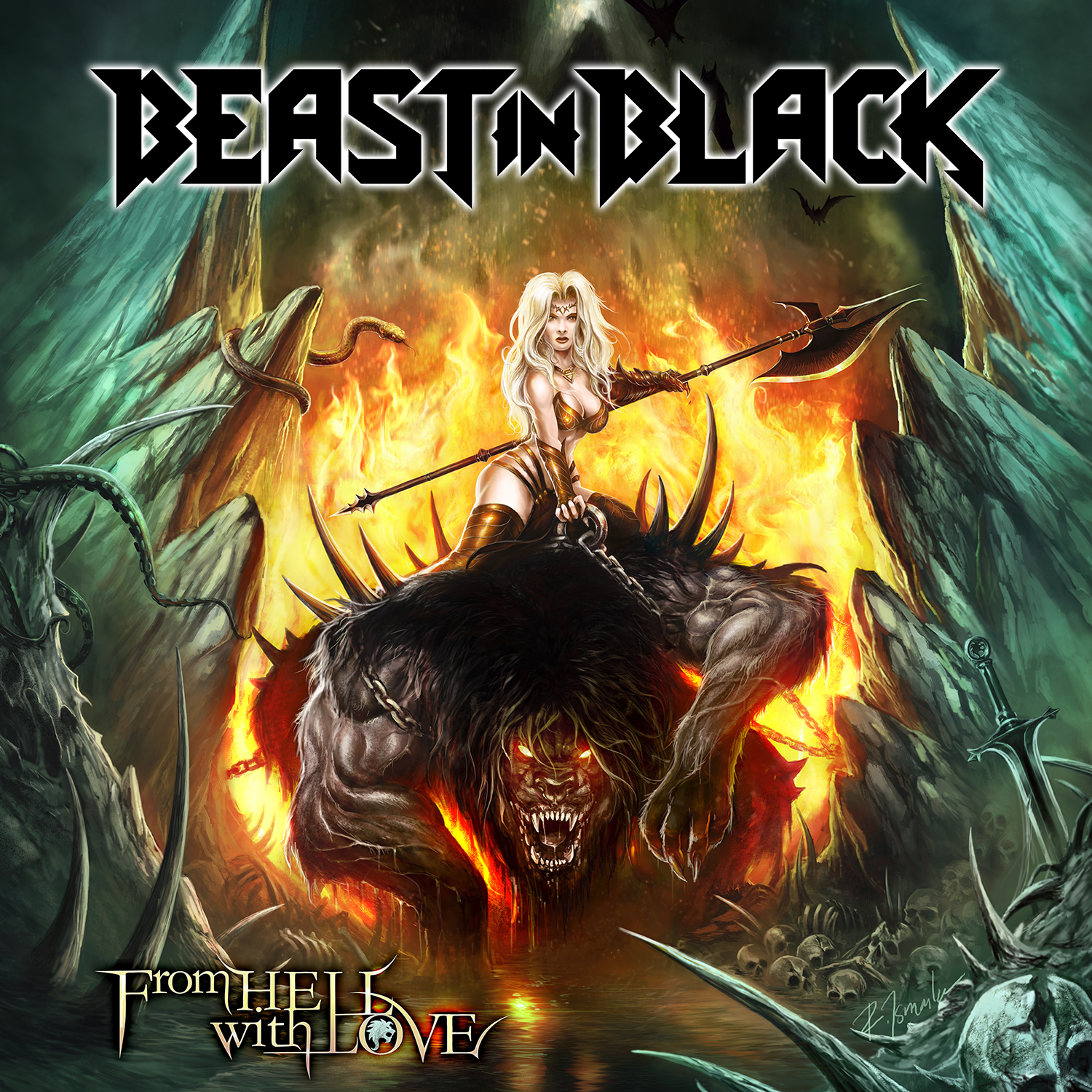 “From Hell with Love” Album Artwork

Though not a full on clone of Anton’s former band from the same label, their approach is naturally a fair bit similar, including but not limited to their preference to forego instrumental preludes or any other introductory material and cut right to the chase. Rocking at an upper mid-paced groove and loaded to the brim with keyboard and guitar-driven hooks, “Cry Out For A Hero” sets the tone with an arena-oriented fanfare number that’s heavy enough for metal, but also concise and catchy enough for rock radio. This approach proves to be a dominant theme on this album, thought with varying degrees of metallic intrigue as the synth-pop elements function as occasional gimmicks on metallic crushers like “From Hell With Love” and “Unlimited Sin”, meanwhile accessible anthems such as this album’s two promotional singles “Sweet True Lies” and “Die By The Blade”, while lyrically different, could both pass for a heavier version of something off the Rocky IV soundtrack. Interestingly enough, the band wears their pop/rock influences on their shirtsleeve by presenting a truly spellbinding metallic rendition of the Robert Tepper classic “No Easy Way Out” from the same film.

The point of contrast that this metallic beast shares with its female-fronted forerunner largely rests in a greater degree of power metal influences, and this time around those elements are a fair bit more pronounced. Heavy ended and pounding riff monsters like “Repentless” and “Heart Of Steel” listen a bit closer to the sort of war anthem based power of Sabaton and Civil War rather than metal-tinged revamps of the Scarface soundtrack, while “This Is War” could all but pass for either band minus Papadopoulos’ shriek-happy vocals, and even on more hook-obsessed sing-along romps like “No Surrender” the band’s Iron Maiden and Helloween influences hold equal sway with the dance elements. The lone exceptions to this ongoing stylist duality come in a faithful yet denser cover of Motorhead’s “Killed By Death”, which sees Yannis all but perfectly imitating Lemmy Kilmister’s haggard, cigarette-steeped gruff, and a rather auspiciously serene and melancholy ballad in “Oceandeep” that listens close to a number of similarly oriented ballads from Battle Beast and features the same vocalist crooning in a falsetto that epitomizes vulnerability.

Though the debates may rage endlessly regarding whether this band or Battle Beast is the true continuation of beast that gave the metal masses the riveting fit of heavy metal revivalism that was the latter’s self-titled 2013 classic and Unholy Savior, this is the first offering out of either project from 2016 until now to rival the former of those two as an entire package. There is a good case to be made that while this outfit places a higher priority on the metallic side of the equation, that both bands stand on relatively equal footing and offer more of a good thing rather than one or the other being the shell of its former self. Neither shows any sign of slowing down and will likely continue to be cross-town rivals sharing the same record label and the same target audience for the foreseeable future, which is hardly an eventuality that would warrant complaint. For any who want to take a glimpse into the world where Judas Priest, Accept or W.A.S.P. had performed on the soundtracks of a number of iconic mid-1980s Hollywood blockbusters, this is about as close as it gets.

“From Hell With Love” Track-Listing:

The unlikely marriage of mid-80s, anthem-based heavy metal and its contemporary commercial rival post-disco/synth pop, that took the Euro metal world by storm in the early 2010s, gets yet another power metal upgrade