Technicality and brutality are universal, proven by the consistent brilliance of Australian technical death-core band Aversions Crown. Three full-length albums already to their name, the band’s fourth album “Hell Will Come For Us All” further explores the conceptual intersection between science fiction and the lessons we can learn from our own reality. Rarely permitting listeners the opportunity to catch their breath throughout the instrumental barrage, this album relies on a consistent thunder of drums and exceeding precision across strings to give the impression of a world splintering apart. Darkened further with distortion and dissonance in deceptively contemplative instrumental lulls in the same style as black metal, the world which Aversions Crown have created is one teeming with shadows of destruction that refuse to be tamed.

In 2019 Aversions Crown welcomed new vocalist Tyler Miller into the fold, an addition that has undoubtedly strengthened the aggressive onslaught that defines “Hell Will Come For Us All.” Miller’s vocal execution is incredibly refined as he traverses earth-fracturing growls and sky-splitting screams with sharp enunciation and unwavering endurance. The dynamic contrast across the album in vocal styles is further accented by moments of complete vocal isolation, giving Miller a central focus on title track “Hell Will Come For Us All.” As much of a forward role the vocals are given in the mix of “Hymn of Annihilation,” there are also moments such as those in “Born In the Gutter” which sees preference yielded to the impenetrable technical execution of Aversions Crown’s guitarists. Echoing distantly behind drums and electrifying riffs of “Sorrow Never Sleeps,” the seamless integration of vocals into the technically adept instrumentation of “Hell Will Come For Us All” sets Aversions Crown apart from the rest of the death-core scene.

The single song which best captures the quintessential atmosphere of Aversions Crown is penultimate track “Sorrow Never Sleeps,” a sonic storm which is as hard-hitting as it is emotionally desolate. Grief and anger coalesce across technically adept riffs from Chris Cougan setting the tone while percussion continues its relentless pursuit. While earlier tracks including “Scourge of Violence” see a similar level of dexterity in their melodies, “Sorrow Never Sleeps” strikes the right balance between the blistering speed offered by drummer Jayden Mason’s pacing and giving both Cougan and Mick Jeffrey room to breathe. Wielding 8-strings and digging into a penchant for hauntingly melodic motifs, earnest showmanship wraps around the album’s most memorable chorus for a full display of technical skills. 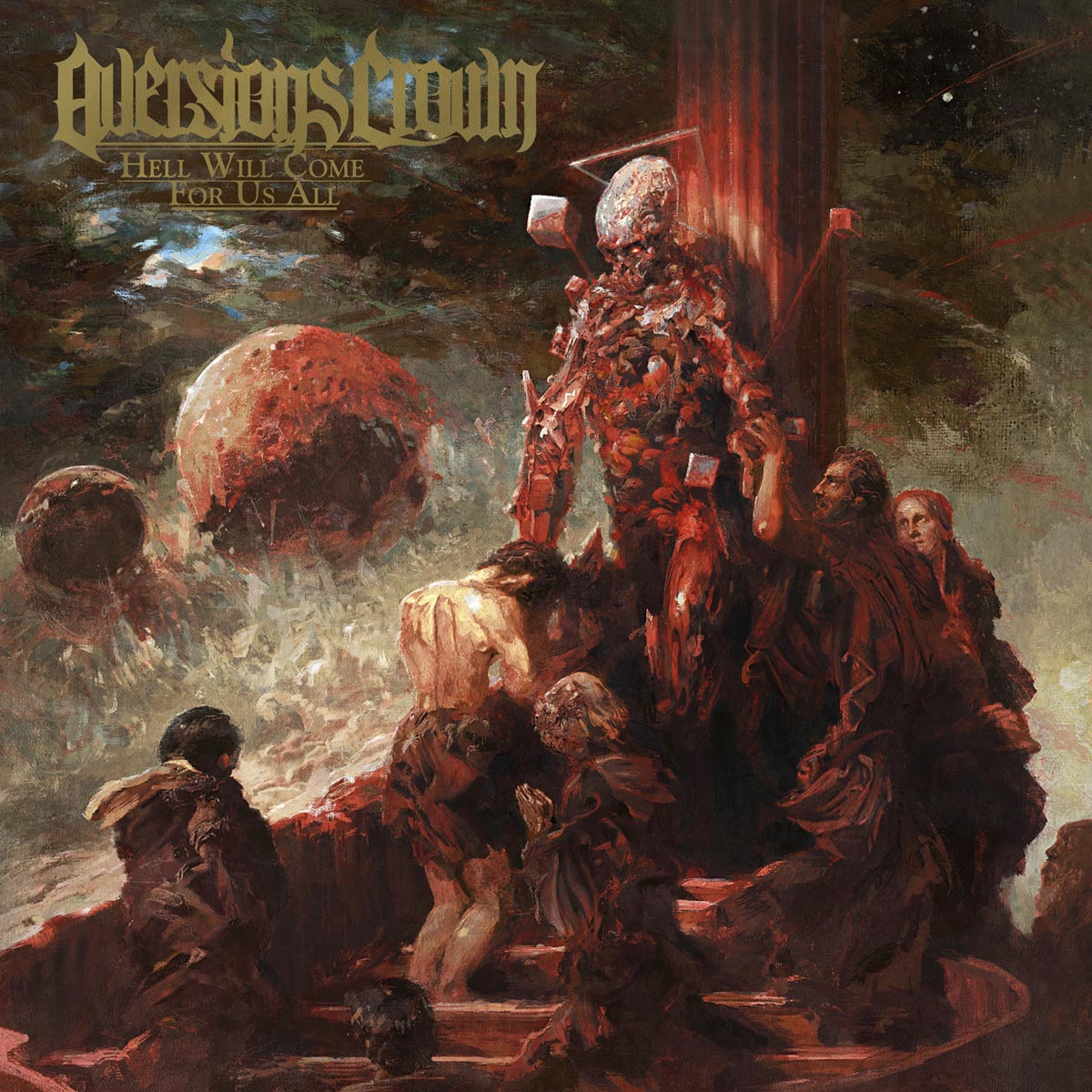 “Hell Will Come For Us All” Album Artwork

When it comes to the storytelling power of “Hell Will Come For Us All” there is a slight preferential skew towards the album’s latter half. The last three tracks are certainly the album’s strongest, and achieve the most effective use of dissonant sound effects to create that lingering feeling of brutally desolate science fiction landscapes. “The Soil” could have been a strong opener in the same vein with more attention paid towards additional effects, yet it seems to fall in line with deathcore standards in terms of speed, percussive identity, and vocal arrangements. Despite the strong technical presence offered with consistently impressive riffs throughout “Hell Will Come For Us All,” varying tempos between untempered fury or the gritty march of “Caught In the System” give little dimension to the former half of the album in its entirety. Mason’s drumming is the backbone on which the lead-up to the album’s conclusion is built, but the band only seems to find the true potential of their chemistry following the title track.

Closing with the impressive and cinematic “The Final Judgement,” is evident that this album was born from a clear creative vision and focused musicians. Though the balance of the album feels somewhat off in the complete image Aversions Crown sought to project, each song offered composition that was both well thought-out and appropriately paced. No track overstayed its welcome or left the listener seeking an unspoken conclusion, and there is enough variety across the album to keep engaging listeners across its depths. A comprehensive opus from a band that is certainly maturing by leaps and bounds with each subsequent release, “Hell Comes For Us All” is an enjoyable listen that is technical without losing its accessibility to core fans.

“Hell Will Come For Us All” Track-listing:

In unyielding brutality and fierce technicality, Aversions Crown demonstrate the impressive scope of their abilities in the relentless pursuit of speed and aggression which dominates “Hell Will Come For Us All.” Darkness without a shred of doubt gives a strong sense of stylistic maturity while still digging deep into the most basic foundational roots of deathcore, allowing Aversions Crown a unique identity without sacrificing accessibility.