Artillery. If the name doesn’t sound familiar to you, maybe their logo will help jog your memory. I remember stumbling upon By Inheritance, one of their best albums, in one of many afternoons I spent going through piles of records in stores, and being drawn by the font used in their logo, which seemed like something from the Middle Ages. In addition, if that wasn’t enough, the album rocked too!

Formed in the small Copenhagen suburb of Taastrup in 1982, Artillery were one of the precursors of a more technically driven thrash metal, along with Coroner, Voivod and Megadeth. Much like any band of that era, they’ve had their share of ups and downs—the group first folded in 1991, returned for a brief one-album stint with B.A.C.K. in 1999, and officially reformed in 2007 after a good multi-year hiatus. Since then, they have released several albums, with the trademark sound that made them famous: crunchy and fast-paced riffs, a killer guitar tone, and a no-frills attitude. Now, in 2018, they are back with a brand new record, entitled The Face of Fear.

Produced by Søren Andersen, who also spends his time as lead guitarist in Glenn Hughes’ band, The Face of Fear kicks off with the double-bass workout and riff extravaganza of the title track, which is ideal to open a show. Up next is “Crossroads to Conspiracy”, and quite honestly, upon listening to this track for the first time I almost felt relieved to hear such first class production. While their old albums are still influential, the production on those is really dated, and Artillery really benefits from having Søren Andersen at the helm.

Those who have followed the band’s recent output have come to appreciate Michael Bastholm Dahl’s vocals since he joined in 2012. His style is a lot more diverse than any of the other four singers who were part of Artillery’s rank before, and proof of that can be heard on tracks such as “New Rage” and “Sworn Utopia”. He is at his best in the quasi-ballad “Pain”, which in an ideal world, should have been a radio hit. Topics like the crimes of humanity, horrors of religion and personal strife are present, and Michael delivers a convincing and engaged performance, regardless of the song theme. 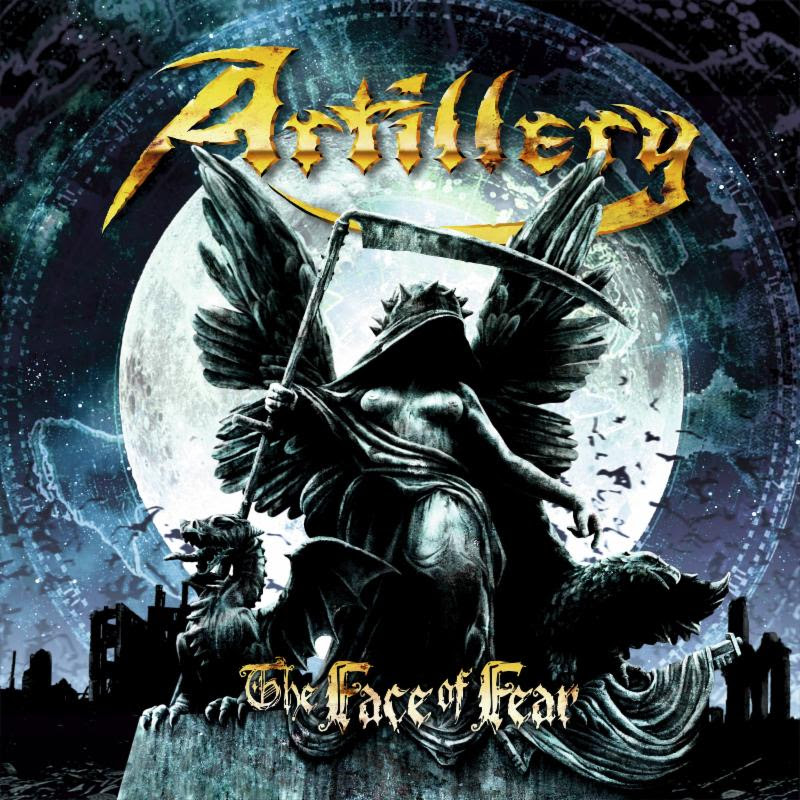 “The Face of Fear” Album Artwork

On “Thirst for the Worst”, Artillery flirts with the more traditional side of metal, again with a great vocal delivery by Michael Dahl, and with an incendiary twin guitar attack by Morten and Michael Stützer which would give Adrian Smith and Dave Murray a run for their money, an almost telepathic soloing exercise they have on display throughout the entire record. It’s refreshing to see Morten back in the studio with the band, after he suffered a stroke which prevented him from touring, and one might say that the joy of playing again with his brother has inspired Michael to compose.

“Under Water” is a stripped back number with an ominous riff, and works almost as a prelude to the anthemic “Preaching to the Converted”. The power-metal influences present in recent albums such as 2014’s Legions seem to have been left behind this time around, with the exception of the aforementioned “Pain”. Not that there’s anything wrong with power-metal, but this time the band seems determined to go back to their origins and signature sound, and bets on thrash and traditional metal arrangements for the most part.

The album comes to a close with “Mind of No Return”, a song from their very first demo from 1982 which finally gets a real “end product” kind of treatment, and “Doctor Evil” – also an old song, but which had already been re-recorded for Legions. Both blend quite well with the new material, although “Doctor Evil” wasn’t really needed here: the same producer and lineup recorded the 2013 version, and there’s not much difference between the two. I can however, understand the back-to-the-roots mission statement, and adding these old songs are even clearer evidence of how a more current production can favor their repertoire.

Overall, The Face of Fear is a great addition to Artillery’s discography, and one where once again they provide evidence that they deserve a better place in the metal pantheon. These are guys who were doing thrash metal even before the likes of Metallica, Slayer and Anthrax were around, and the new album is just as cohesive, intense and powerful as any of the recent albums by their richer and more famous and incensed brothers from America.

“The Face of Fear” Track-Listing:

Battered, bruised and certainly not unscathed, Artillery stays strong and fresh in the new release “The Face of Fear”. High-soaring vocals, razor-sharp riffs, thundering bass and unstoppable drumming are featured from the first track to the last, and this is one of their most clear sounding albums in their lengthy catalogue. Despite two of the tracks being old numbers, this is an impressively cohesive album which deserves to be played loud!